This week I started with the idea of imitating textures of the luxury industry like Hand-woven, animal skin textures or simple textures that give the idea of continuous surface and not too technological, to apply shoes from modules that allow modifying aesthetics and playing with the color, modularity or mood of footwear.

According to the complexity of the last, I consider it necessary to play with larger modules to cover the areas of greatest deformation in order to create a modular upper system that one side includes the modular surface and the other the anchor zones with the sole. I started analyzing with my tutor several previous exercises to understand the methodology to create a modules.

This is the link to my pinterest folder where you can check some more references: PinterestJF

Design and prototype with paper and scissors modular configurations and locking connections. Document the paper prototypes¶ 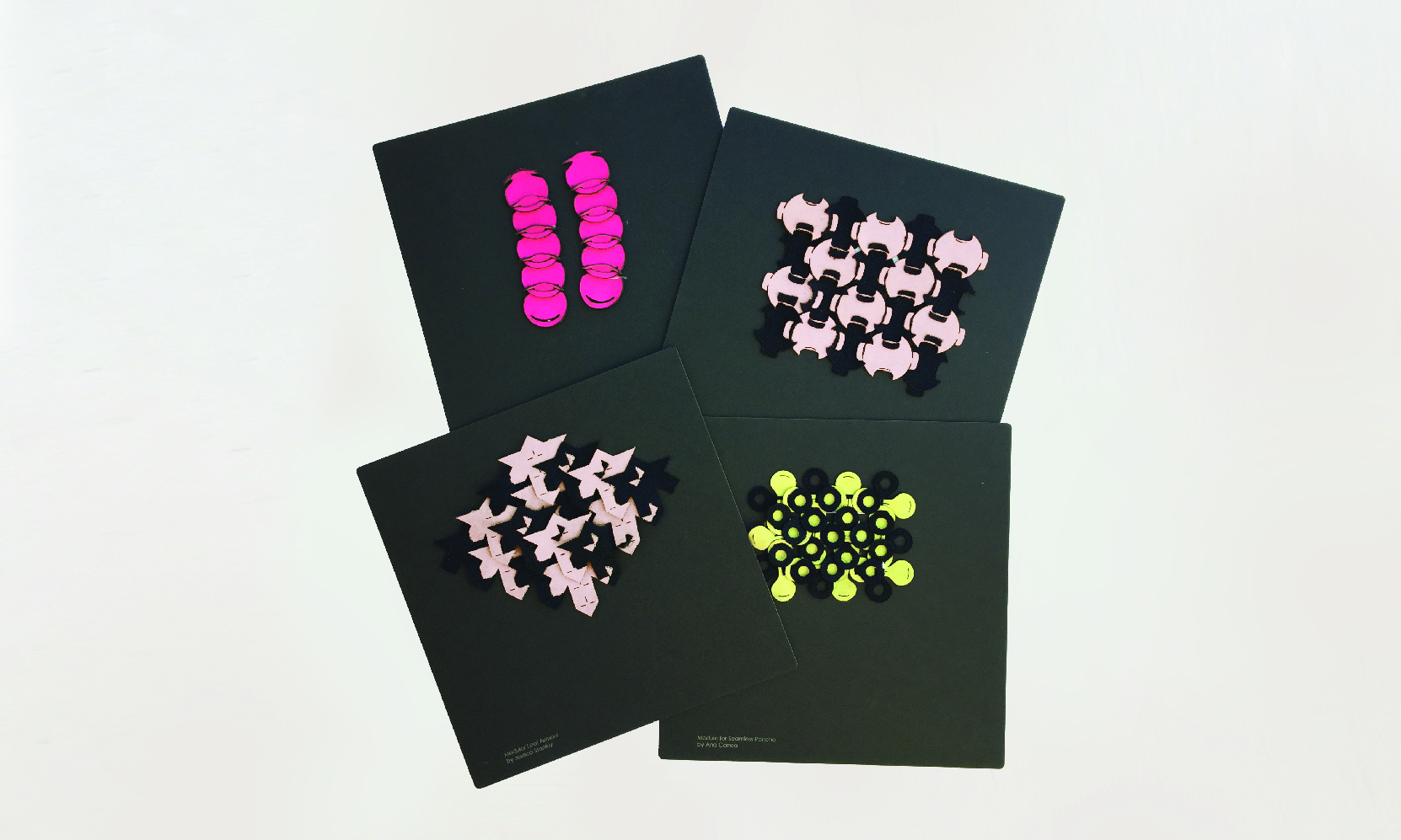 I start looking how interluck works. Started by drawing some ideas and module possibilities. Inspired by one of the joining systems that I reviewed from the previous year, I identified the system that would allow me to join the modules lightly and safely. 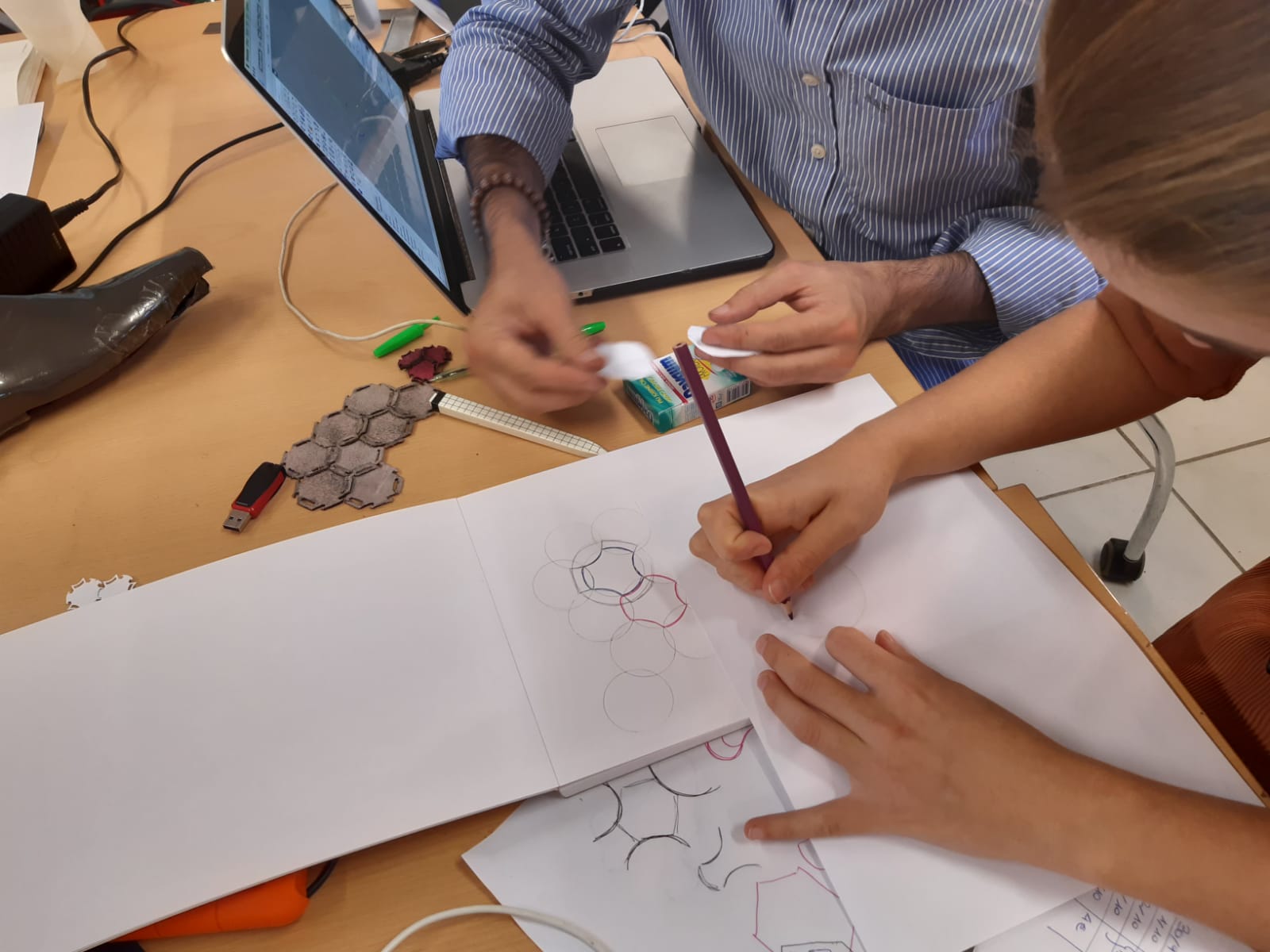 The first tests on paper I could not cut them with scissors because of the complexity of the module and size (2.5cm), so I cut them in laser. Laser machine setting: speed: 70, power: 15

The first problem is that when exporting the file it did not recognize the groups, so I tryed first to re-join them in Illustrator and exported again the file in format .dxf. The laser software Lasercuts 5.3.* still not recognizing, so then I united the pices again in the Laser´s software so to be able to organized the layers of cuting.

When doing the cutting test, we checked that it was not recognizing the format of the piece, so we also resized it in the Lasercuts 5.3 software.

The first exercises apparently work very well the module, I did tests in 2 dimensions to identify the most suitable for the shoe last. 25 mm and 35 mm.

I decided to work with the 25 mm module and at the suggestion of my instructor I extended the ends of the male to have a better grip. 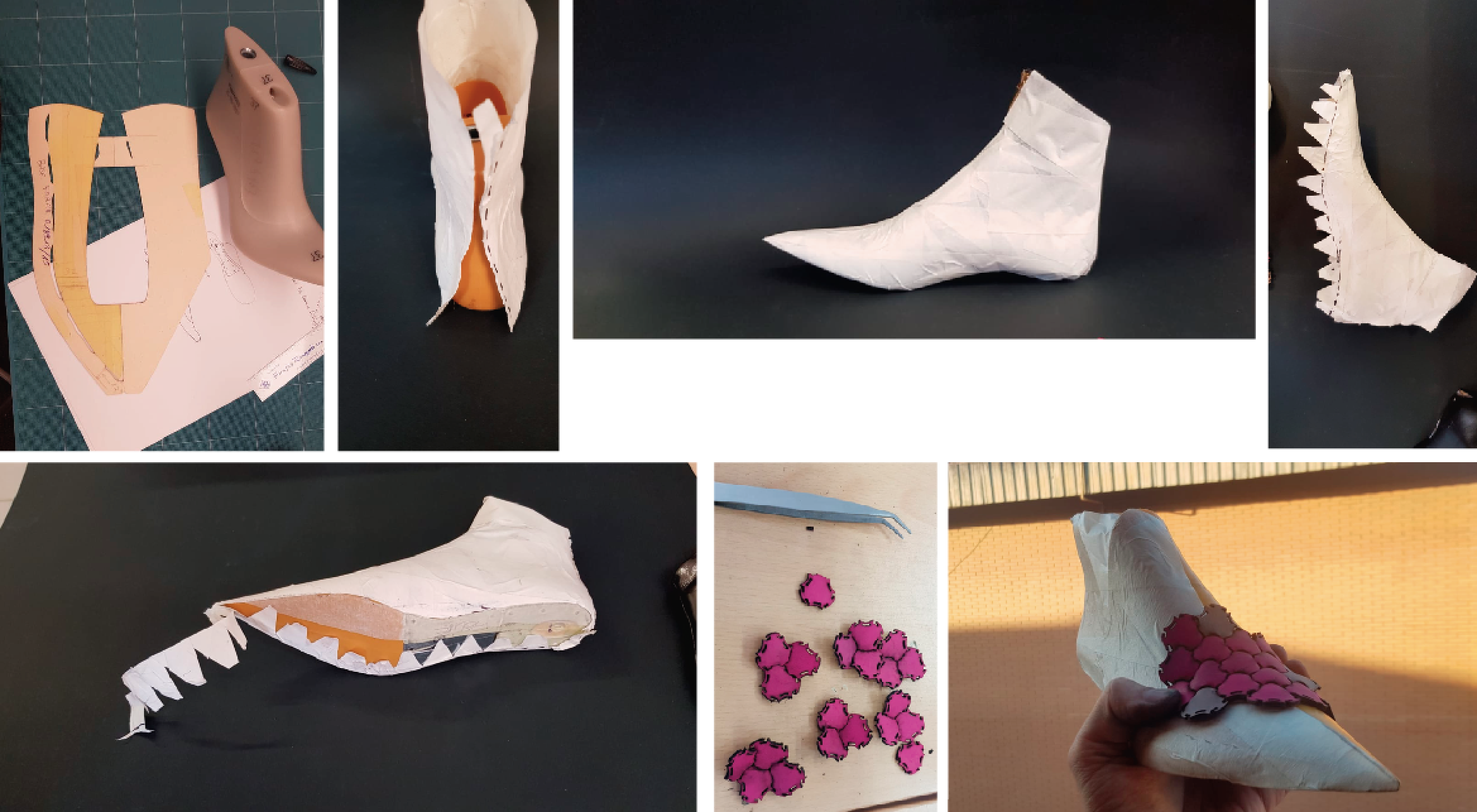 I worked with 2 mm leather the first tests and the module works very well.

The form that I wanted to express is lost a little by the union system so we explore other designs that might work.

With the support of my instructor, we work on creating another form of assembly so that the form I want is more defined, from a complete circle. I designed the new module directly in Rhino, cleaned the lines and made sure I had only one line.

Cut the first test with the same parameters above but certain areas were not short.

I assembled the new module, however I noticed that the skin is much thicker than the previous piece even though they are both of the same piece (I am working with Fendi leather scraps, so it is skin with irregularities in its thickness) .

The new module preserves the shape of the module clearer and is structured with a lot of fixation, however the piece is more rigid than the previous one due to the amount of assembly material, so I will try to remove as much material as possible from the assembly to achieve a fabric of greater flexibility, I will finally play with colors to create a more dynamic and harmonious surface.

Laser cut the modules. Create a modular or seamless garment, showing that the connection is well-designed and holds the pull/stretch of a garment. Document the assembly process and tests.¶

To apply the new textile to footwear, I made the last pattern covering it with masquin tape. having the pattern allows me to define or structure the module for footwear.

I start adding a pice and removing a pice

Upload the open source file in pdf, in correct scale with 1-5 pictures at (https://oscircularfashion.com) (preferably in white background)¶

Submit some of the modules to the analog or digital material library of the lab. Recommended size 20cm *20cm. (extra credit)¶