The Wonderful World of Mycelium# 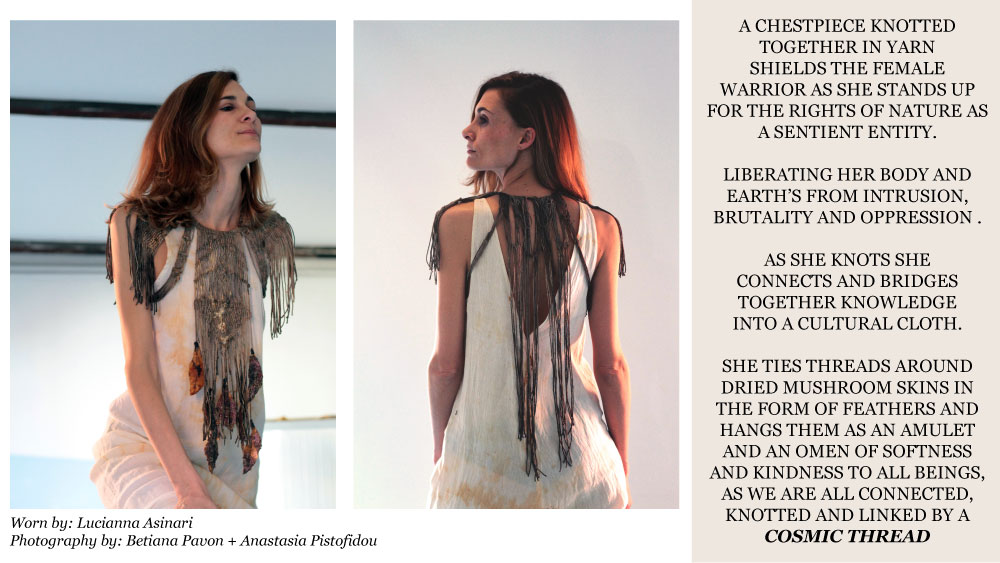 Ecofeminism: Violence on the Lands#

The disconnection between land and humans has been increasing since the industrial revolution, yet numerous studies show the multitude of psychological and physical benefits of connecting with nature. People who are more connected with nature are happier, feel more vital, and have more meaning in their lives, as they are connecting with life essence, which is immaterial, organic and alive.

Human societies have forgotten how to co-exist with nature as co-creators and designers rather than dominators and oppressors. It is of great urgency that we begin to value the deep knowledge of the interconnectedness of nature held by indigenous people and people in rural or remote communities. We must begin to resurrect this knowledge about the life of each organism and their role within the grander ecological structure in order to begin to counter and heal damages sustained by a system based on greed and a corporate patriarchy. The domination of women and environment is an intrinsically linked mentality as women’s bodies are the first human environment. Women and nature are both exploited as resources for the profits of capitalism, extractive industries cut down virgin timber and plow fertile soil as men take advantage of women’s bodies without consent and cause irreparable physical and psychological damage which then carries on as fear and submissiveness in the next generations of women. The feminization of nature and the naturalization of women reinforce their mutual subordination.

For Indigenous communities in North America, the links between land and body violence intersect as extractive industries drill, mine, and frack on lands on or near resource-rich Indigenous territories without consent. Many of these communities are sites of chemical manufacturing and waste dumping, while others have seen an introduction of large encampments of men to work for the gas and oil industry. The devastating impacts of the environmental violence this causes ranges from sexual and domestic violence, drugs and alcohol, murders and disappearances, reproductive illnesses and toxic exposure, threats to culture and Indigenous lifeways, crime, and other social stressors.

It is important to note, that from a gender perspective – examining the overlapping structures between gender oppression and environmental exploitation and the conditions that cause and perpetuate their subordination, we must not only address the injustices to women and nature, but also race, social-economic class and gender identity. 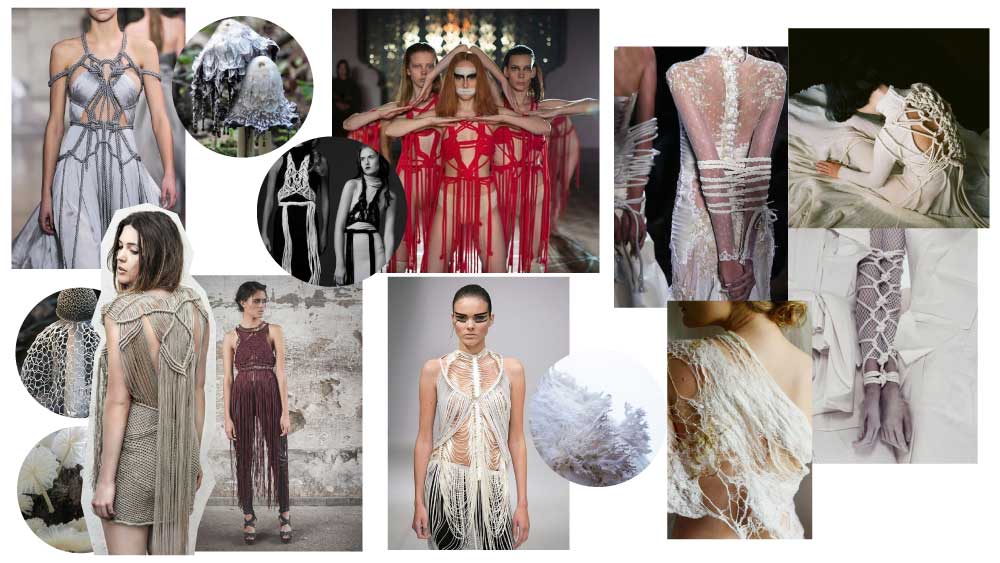 The macramé chest piece is part of a series of three armour or warrior inspired biofabricated garments.

The use of a traditional crafting technique to like knotting yarns to create a cloth represents the people of indigenous origins to a land.

These people are interwoven, knotted into and linked thoroughly with natural processes and biodiversity, their livelihoods depend deeply in the preservation of these interconnections.

The knots are also a representation of the restraint and oppression women share with nature, through the abuse of their bodies, as well as the malpractices of a consumerist culture which perpetuate the loss of their natural ways of gathering water and food for their families.

The macramé also advocates the need for craftsmanship, we are experiencing globally a loss of crafting due to capitalism and increasingly faster modes of production substituting these cultural practices. 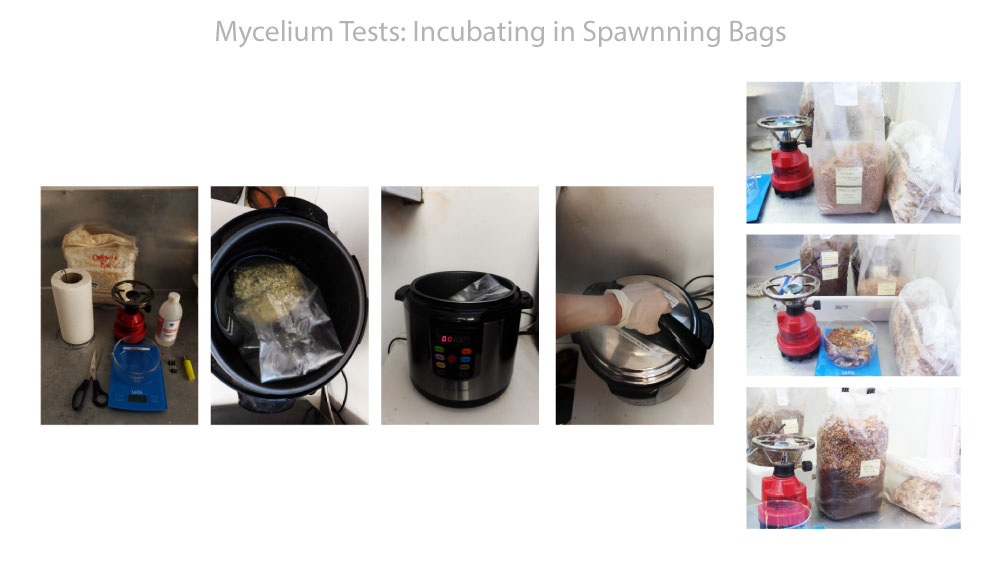 • Mix spawn thoroughly and break up in sterile spawning bag

• Allow to colonize substrate for up to 2 weeks

o Oyster mycelium grew at a faster rate and free of contamination on the sawdust substrate, after a three weeks it began to fruit mushrooms resembling coral structures

Ecovative: How to Use Grow-it-Yourself Material
Ecovative: GIY Mycelium and Growth Instruction PDF 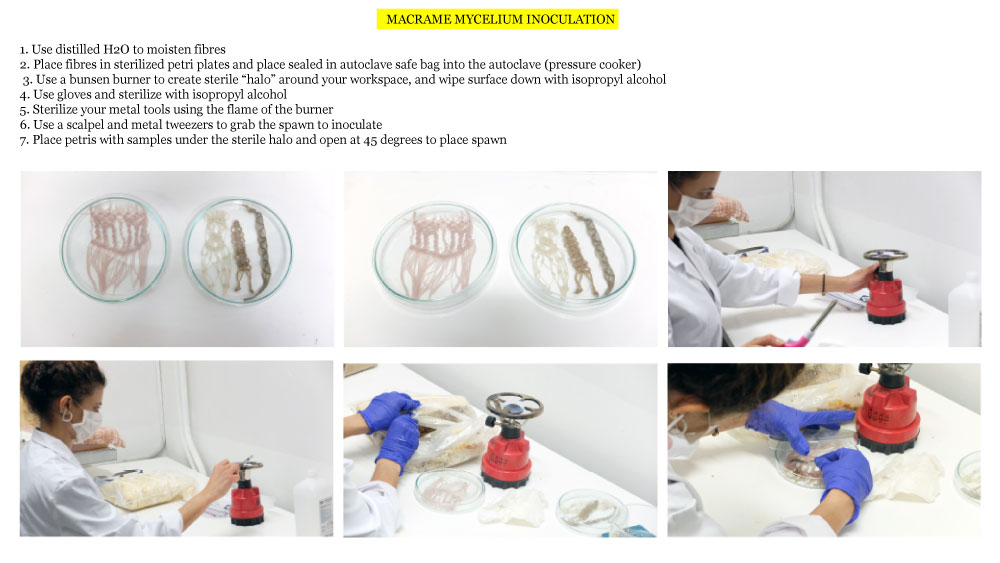 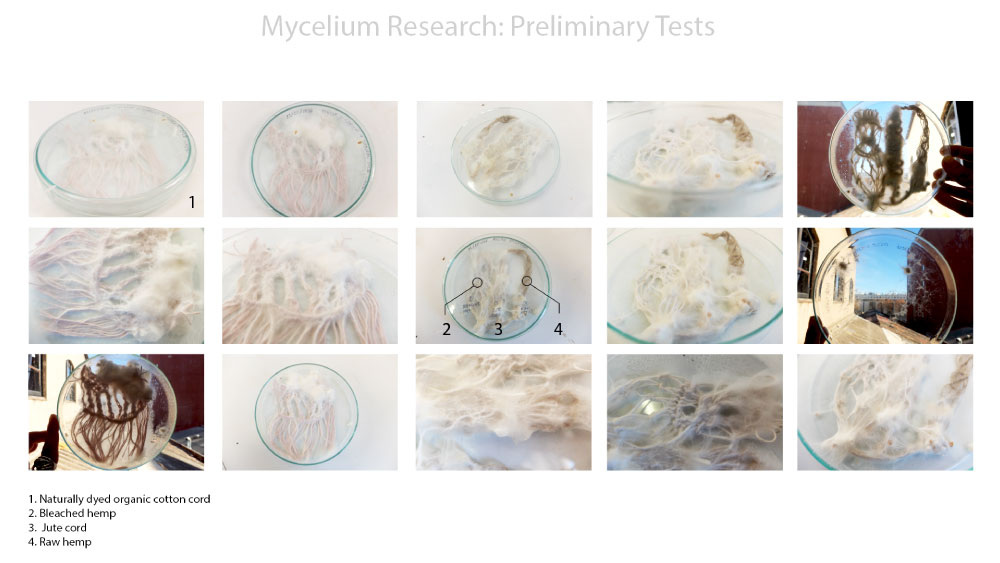 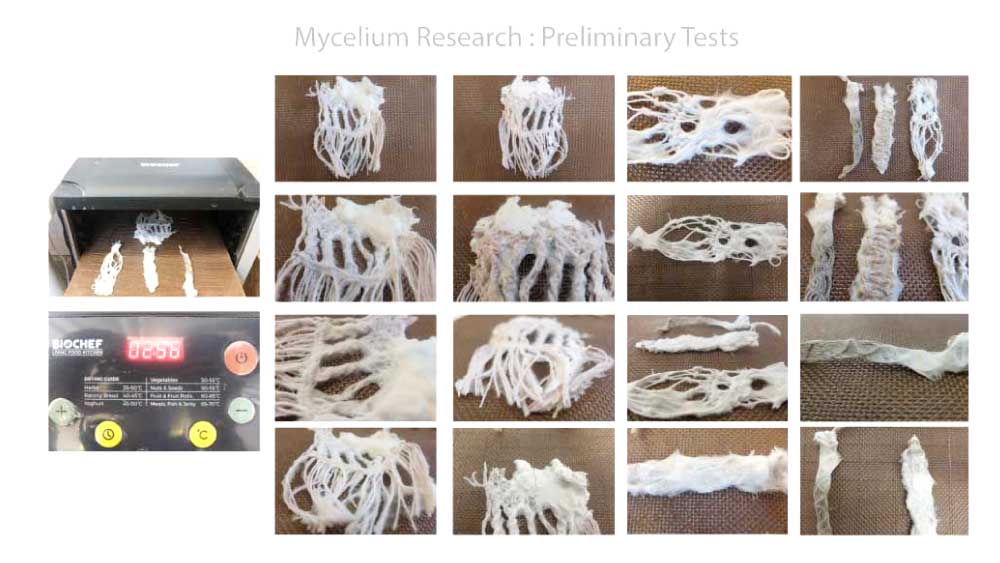 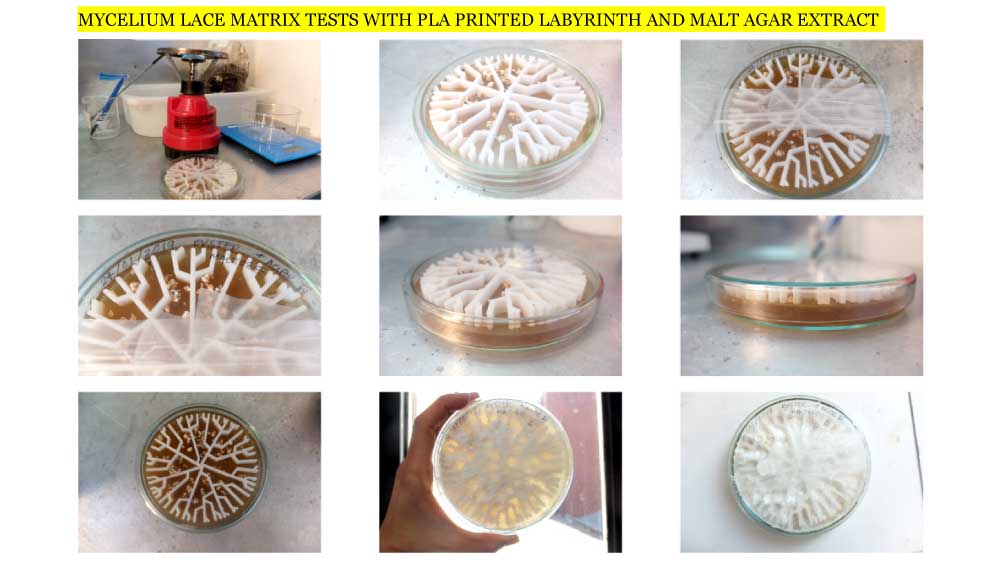 Branching Matrix by catheuale on Sketchfab 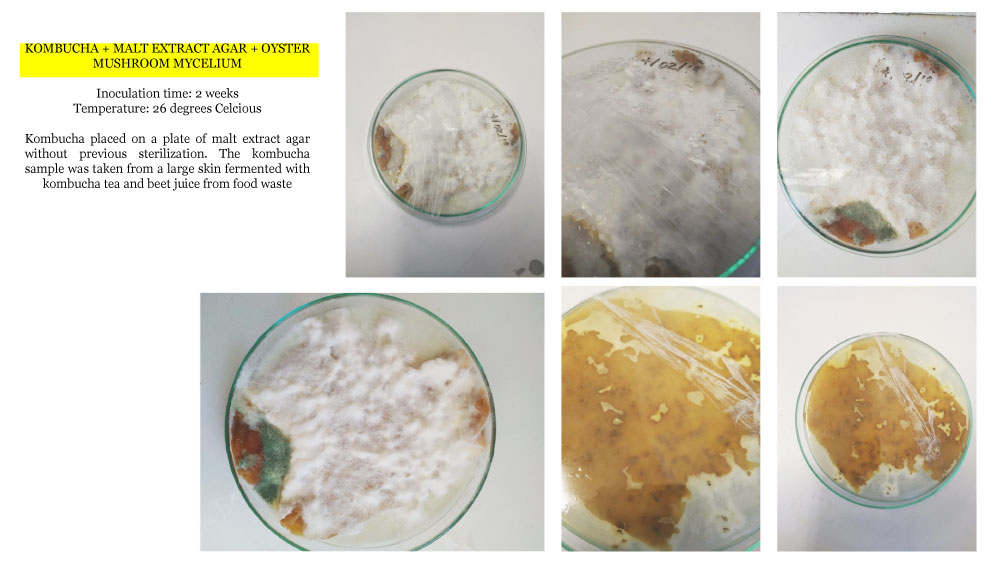 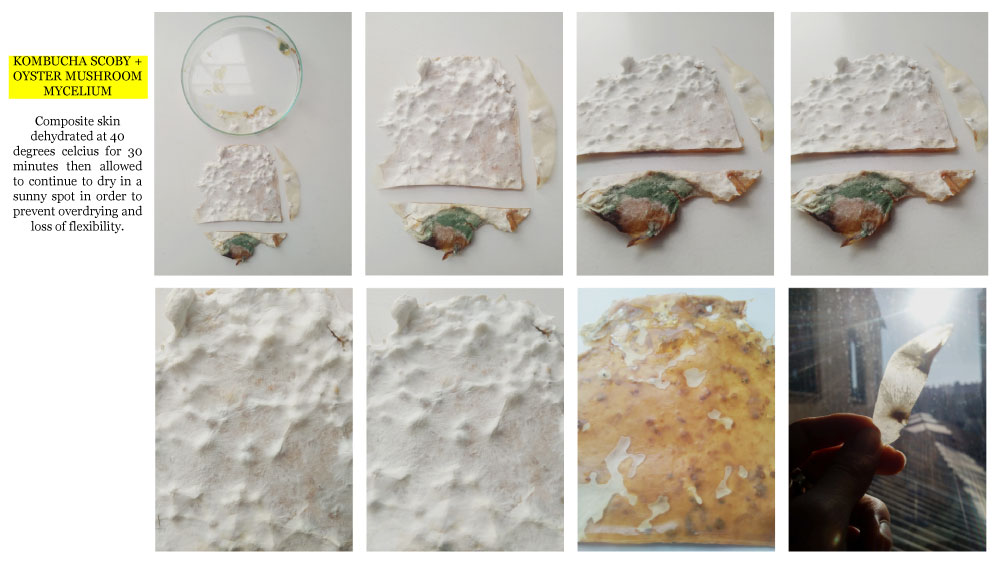 It is extremely important to recognize the traditions and knowledge based on land and observation of the interconnectedness of biodiversity which has allowed us humans to evolve and thrive as a species.

It is critical to recognize land as an entity which is sentient and which will continue to evolve without us if we do not learn to collaborate and co-create with its organisms.

Mycelium’s ability to link, interconnect and mend or bridge gaps between materials and create a skin-like material by fusing together on the surface of a substrate is a reflection on bridging knowledge systems and building on traditional knowledge of land to sustain rather than dominate and eradicate naturally occurring systems. 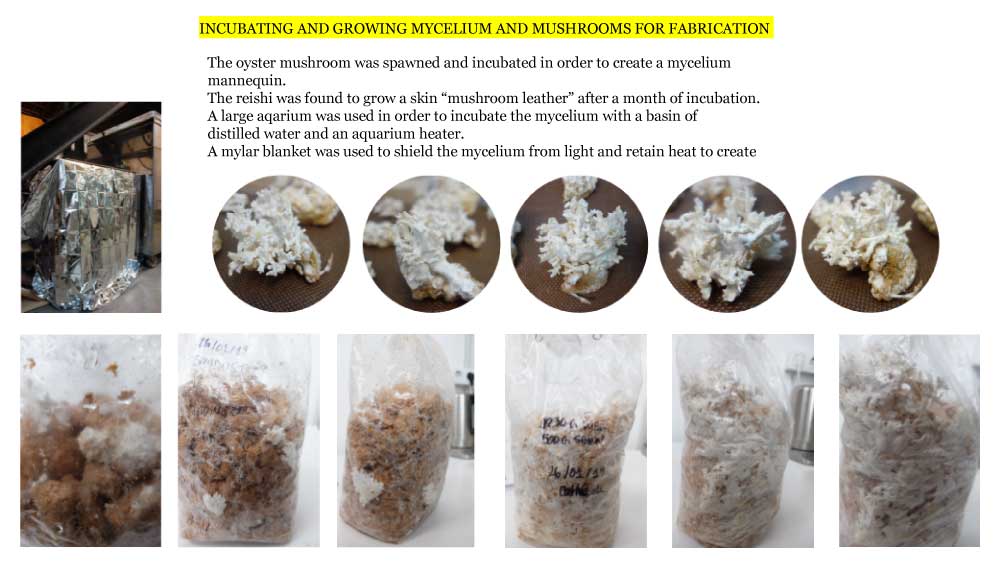 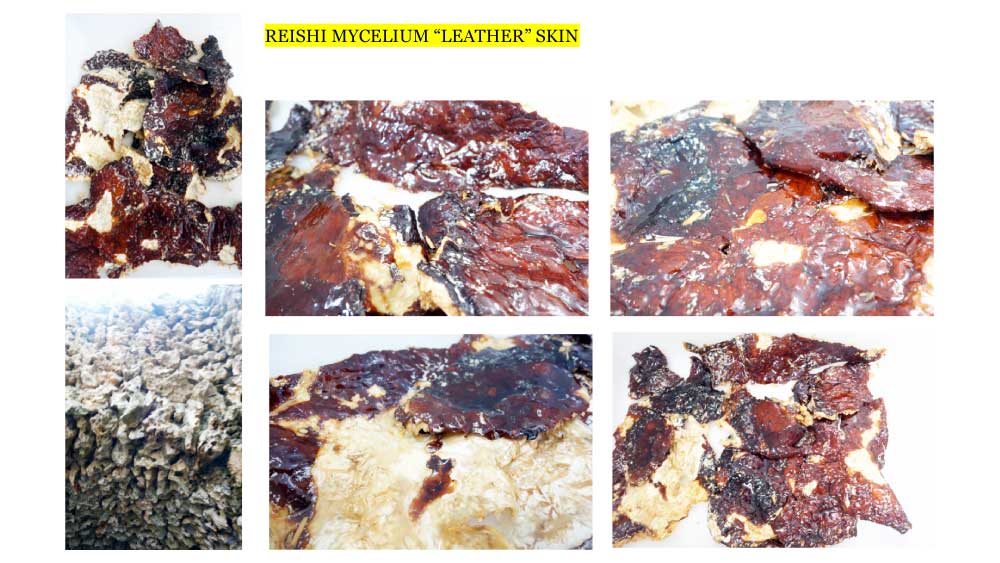 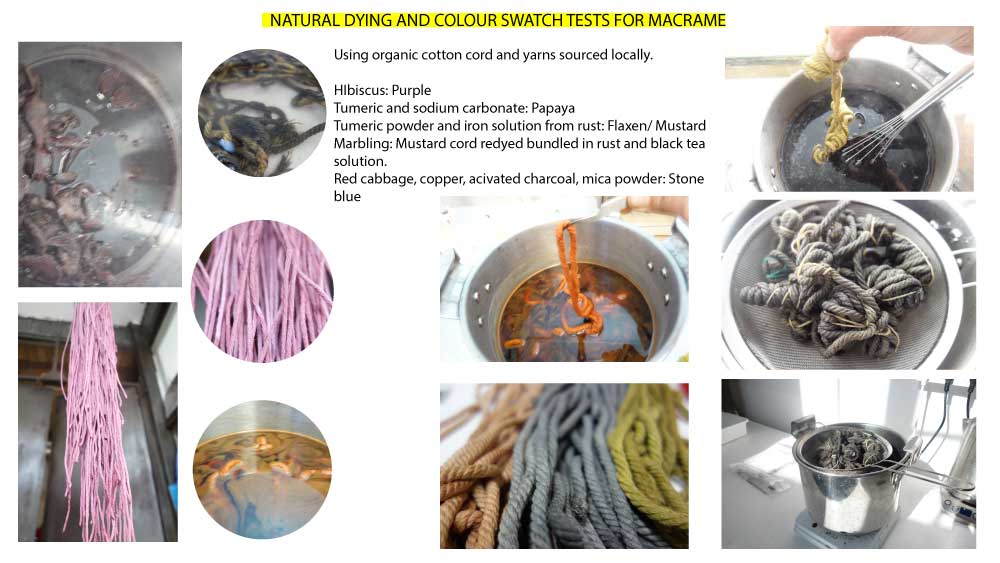 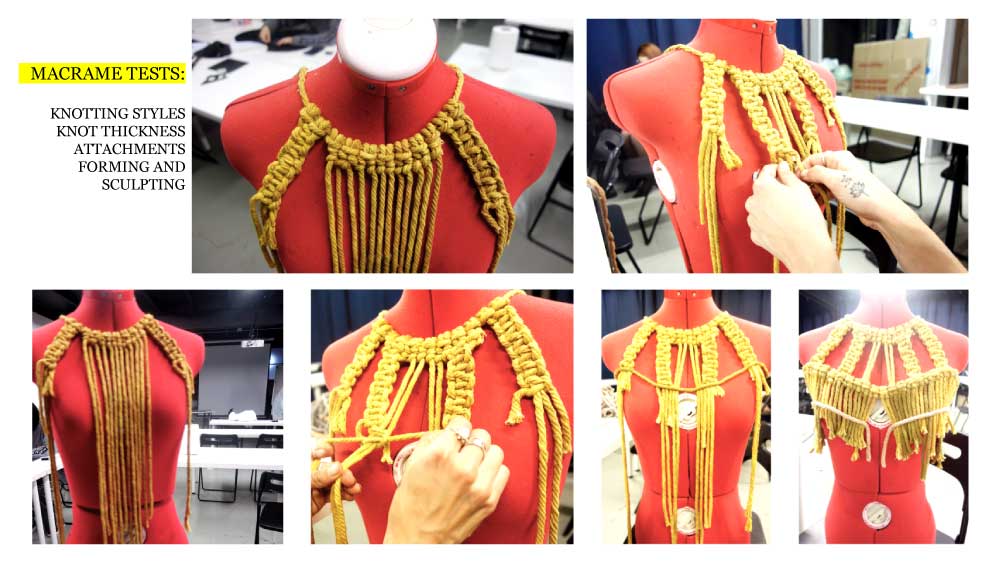 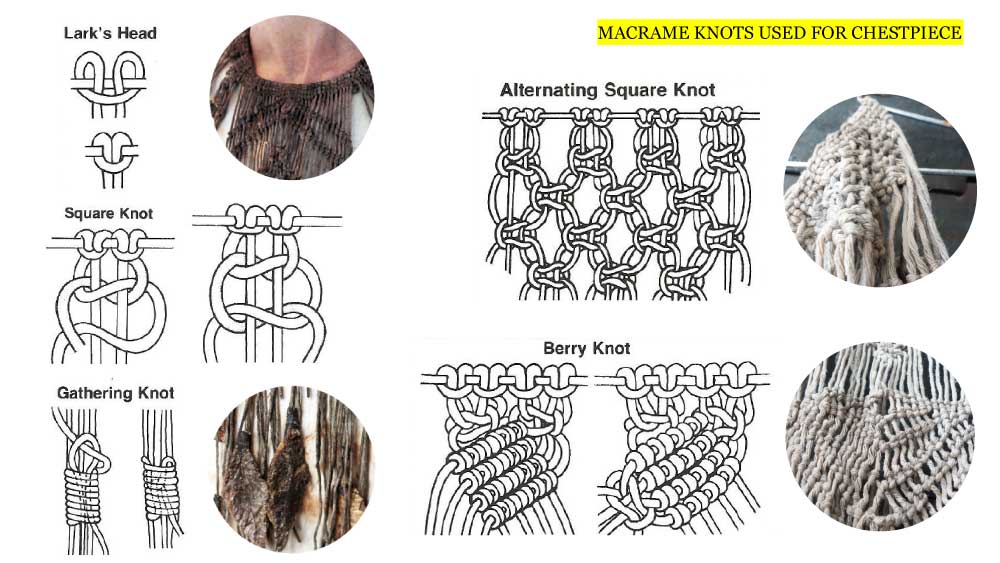 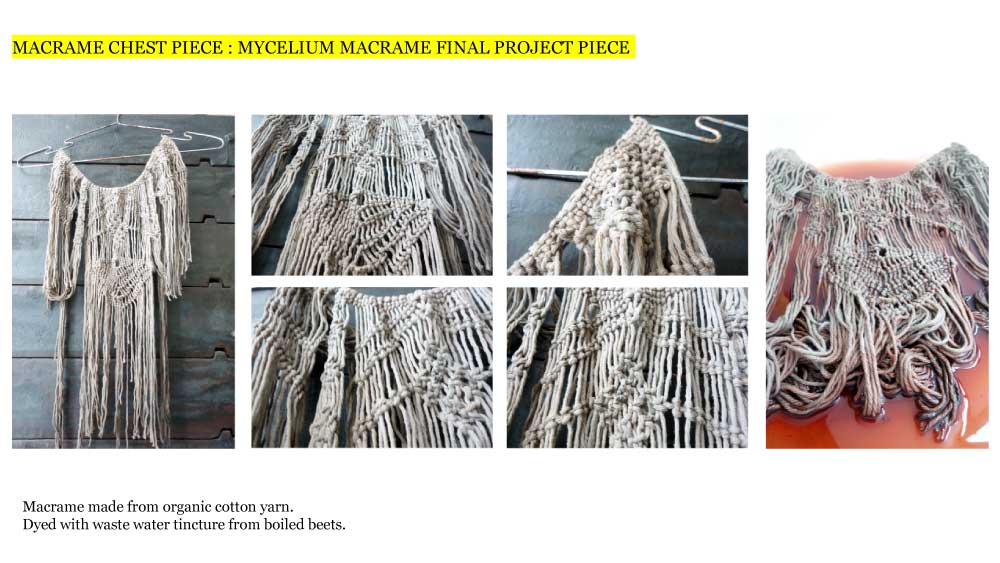 The red colour from the beets used for dying the macrame represents the forceful nature on with people indigenous to a land are removed from their land by resource extraction industries.

Beetroots in themselves, growing into the earth represent how these people are “plucked” and picked out of their habitats for the sake of consumerist needs.

The thought behind using beet dye also stemmed from finding a dye which would provide extra sugars (nutrients) for the mycelium to grow.

The inoculation of this chest piece, after two separate attemps (one in the DIY aquarium incubator, the other in the hydroponics incubator) proved to be unsuccesfull as contamination was present both times.

The first due to the aquarium retaining too much humidity thus allowing for the perfect environment of other invasive mold to grow.

The second due to the mycelium spawn being past it’s date of expiry and thus not being healthy and strong enough to grow throughout the macrame. 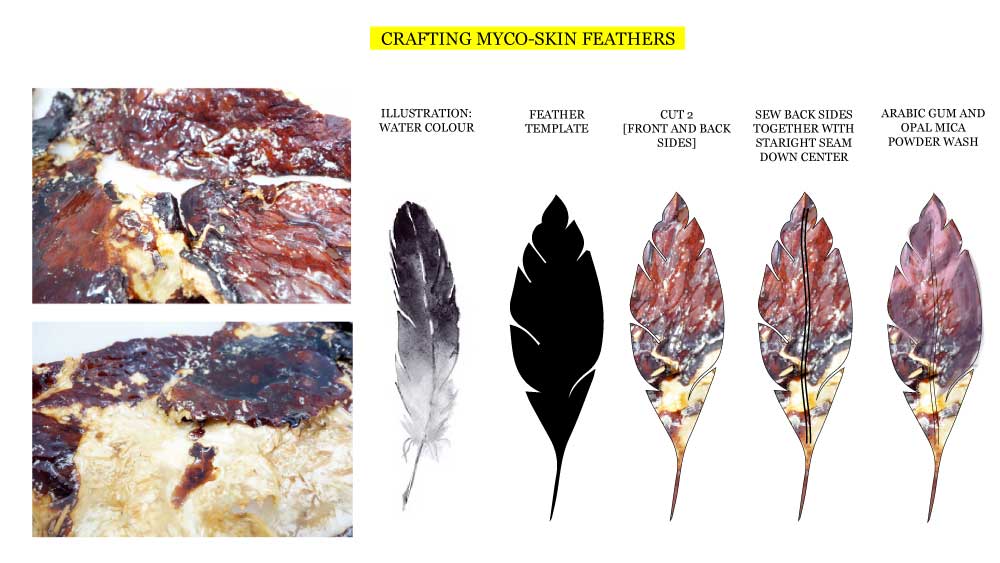 • Incubated for 3 weeks until full colonization of substrate took place

• After the maximum growth of the mycelium skin, a scalpel was used to peel it away from the substrate

• The skin was cleaned, as traditional leather pelt cleaning, by scraping the excess material (straw substrate in this case) with a scalpel

• The skin was soaked in glycerin overnight, similar to moisturizing leather or skin, the mycelium skin needs to be hydrated thoroughly in order to stay flexible

• After the moisturizing process, use a heat press or industrial iron to stop any mold from growing

• Try various finishes for the leather at this point

• For the mycelium leather feathers a wash of Arabic gum, water and natural opal mica powder (for iridescence) were used

• Cut the feathers in the shape that you prefer, to have two right sides, fold leather in half and cut two sides for each feather, then sew down the middle with a straight stitch 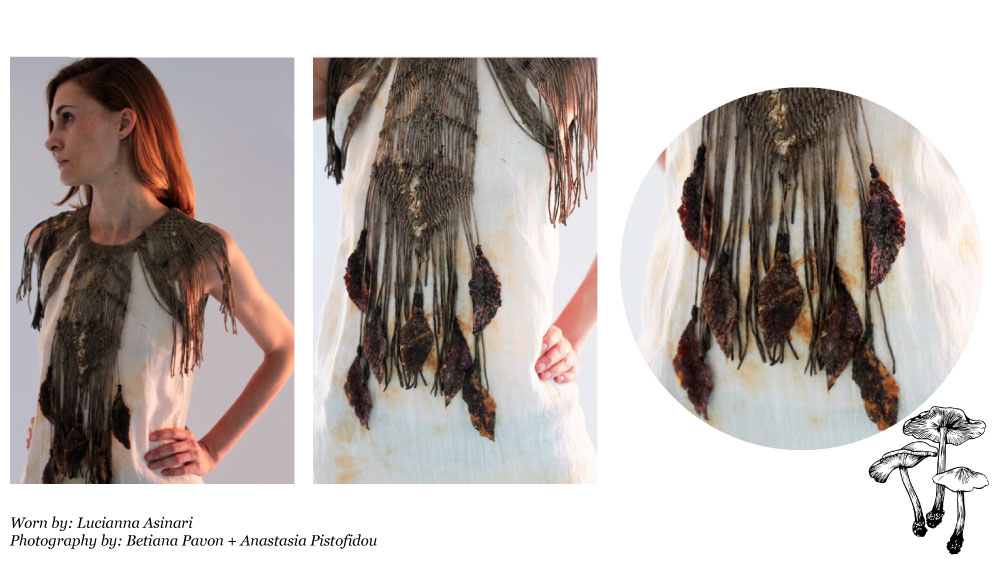