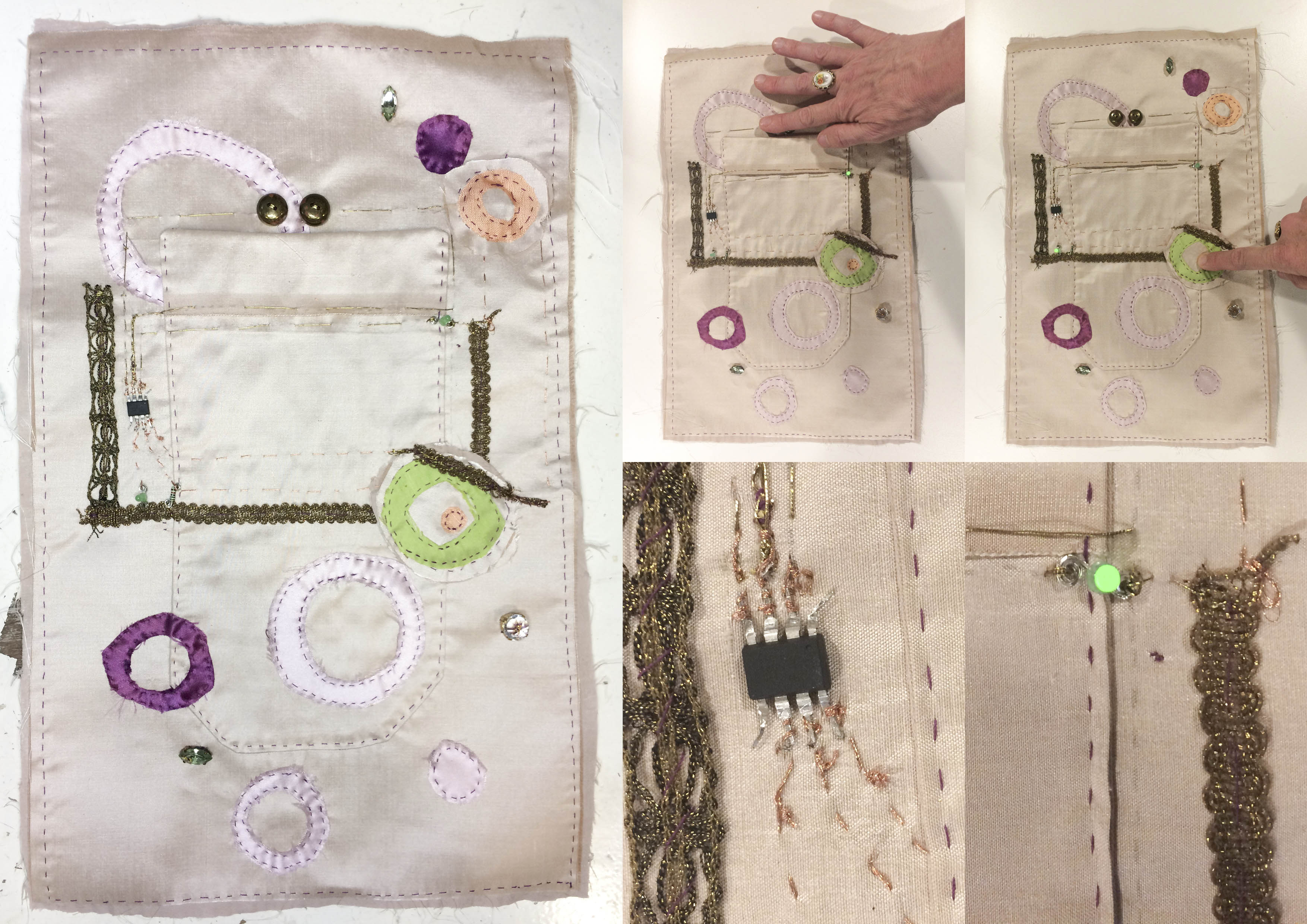 A Treasure Box from my Mum’s Attic#

This summer my mum gave me a few of her old storage boxes with embroidery materials. She was clearing out the attic. The boxes must have been left unopened for probably more than 15 years. It was a mess inside. When I started to sort the materials out on Tuesday (finding also a lot of my old beadworks and other things I made as a teenager) I discovered that the threads my mother used for her ‘gold embroidery’ (‘goudwerk’ in Dutch) are in fact conductive. This made me so happy! What an unexpected surprise from the past. I decided to use the materials for part one of this week’s assignment (making an electrical circuit) because they were all small bits and pieces, sort of ‘orphaned things’, I would say. For example there were squished pink and purple circles cut from satin, God only knows why my mother made those and what she wanted to make from them (and why she didn’t use them). I felt sorry for these sad bits of fabrics, and for the stillborn ideas of so long ago. I figured that if I would not use these materials now, nobody would use them ever. So that is why all of the materials in my soft circuit - apart from the ATtiny, the LEDs, the resistor, the battery and some small pieces of copper thread - are from the old embroidery box of my mum’s. I even used regular threads and needles (bend - because of ageing?) from the box. They are not my choice of colors, not my choice of fabrics and not my choice of haberdashery and I was very much surprised by what they turned out to be.

But the process… One thing that has become crystal clear to me is that working with electricity and microprocessors means NEEDING MORE TIME THAN YOU THINK AND PLEASE DOUBLE THE TIME YOU THINK YOU NEED AND ADD AT LEAST TWO TO FOUR DAYS TO THAT. I have worked with Arduino before in my practice as a media artist, but then I always had a programmer, technician or friend to help me out. Believe me: that is not the same. I think I did not learn very much during that time. I just ‘outsourced’ the troublesome technology-stuff. Which is sort of understandable, for it is complicated to work with interactive media and electronics, and scary too because you never know what is going wrong, and if it is you who’s stupid or the materials that are faulty. So for this week’s assignment I told myself I needed to bite the bullet and do everything myself, including the tedious and frustrating troubleshooting. So said and done. It took me over 40 hours to produce the soft circuit above but I solved all problems myself. It has been a collosal boost to my self-esteem. To know that you are able to find solutions and can make something to work out, gives a lot of confidence. I would recommend everyone to do the same. Take a full week and go for it. (I must admit I made a Björn Borg winning-his-fifth-Wimbledon-victory knee fall when the circuit turned out to work indeed, right there in the middle of the Amsterdam fablab.) 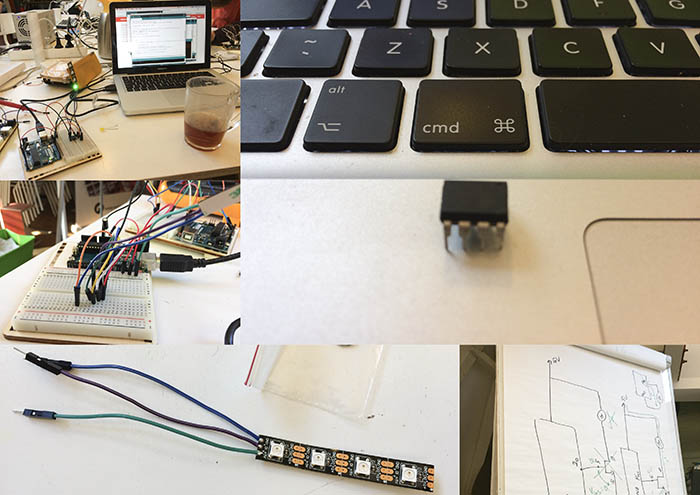 The ATtiny is so tiny that it cannot even be in focus.

Copy in Order to Study and Learn#

One of my favourite teachers in artschool famously said: ‘Copy to study and learn.’ She was convinced that personal style and unique ‘handwriting’ is already present in every person. It needs no ‘kindling’. However copying the work of artists one admires teaches you a more valuable lesson, namely, the tricks of the trade. It also relaxes you into the work since the focus is on the what and how and not on the why, the much dreaded and stiffling question for starting artists. I guess this teacher was a fan of the ‘guilder’s system’ to learn by example. For this assignment I decided to take her advice at heart and do just that: copy a soft circuit given and explained by Liza Stark (who I admire) and consider her workshop as my trail of breadcrumbs through the woods. I also used Emma Pareschi’s very good electronics workshop as reference. 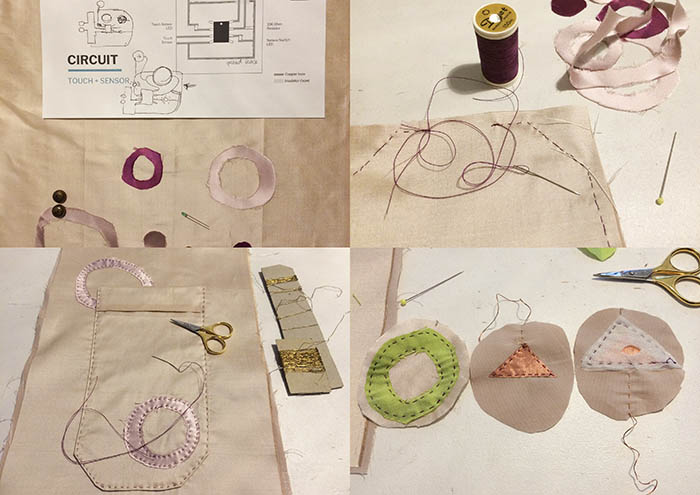 Ofcourse nothing worked the first time. Ofcourse I wasn’t able to install the ATtiny on my computer at home. Ofcourse the breadboard made no sense. Ofcourse the LEDs kept their secrets of polarity. In the end, just when I was ready to give up, I re-installed the Arduino software and started from scratch. Step by step and hour by hour I discovered what I was doing wrong and how I could do it right. And then I tested, tested again and tested better. Test the circuit on the breadboard. Test the circuit with just the ATtiny an a battery on the breadboard. If I had had more time, I would probably even have tested a circuit made from loose threads on the fabric. When all was oke, I sewed the circuit on the fabric using the conductive materials from my mum’s old embroidery box. This turned out to be rather difficult. The ‘gold’ threads were not made for the kind of fabric I used (a patch of silk with a kind of pocket on it - weird? - also from the box) because the metal was wrapped around a silk core. I used cringe beads to be able to secure the ATtiny, but they turned out to be too bulky and ugly, so I removed them and sewed the ATting directly on the fabric. I decided that two sensors were enough (the example gave three). I made a touch sensor from two metal buttons (made from a kind of bronze, I suspect) and I made a pressure sensor. 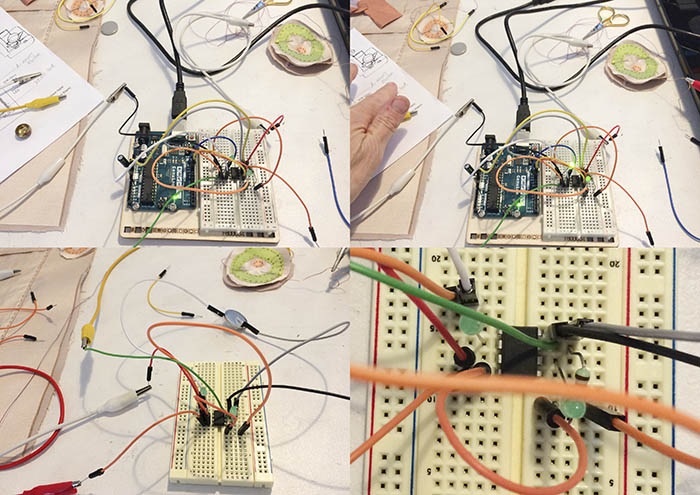 Working with the phantastic magnifying glass in the fablab: I want to get me one of those… 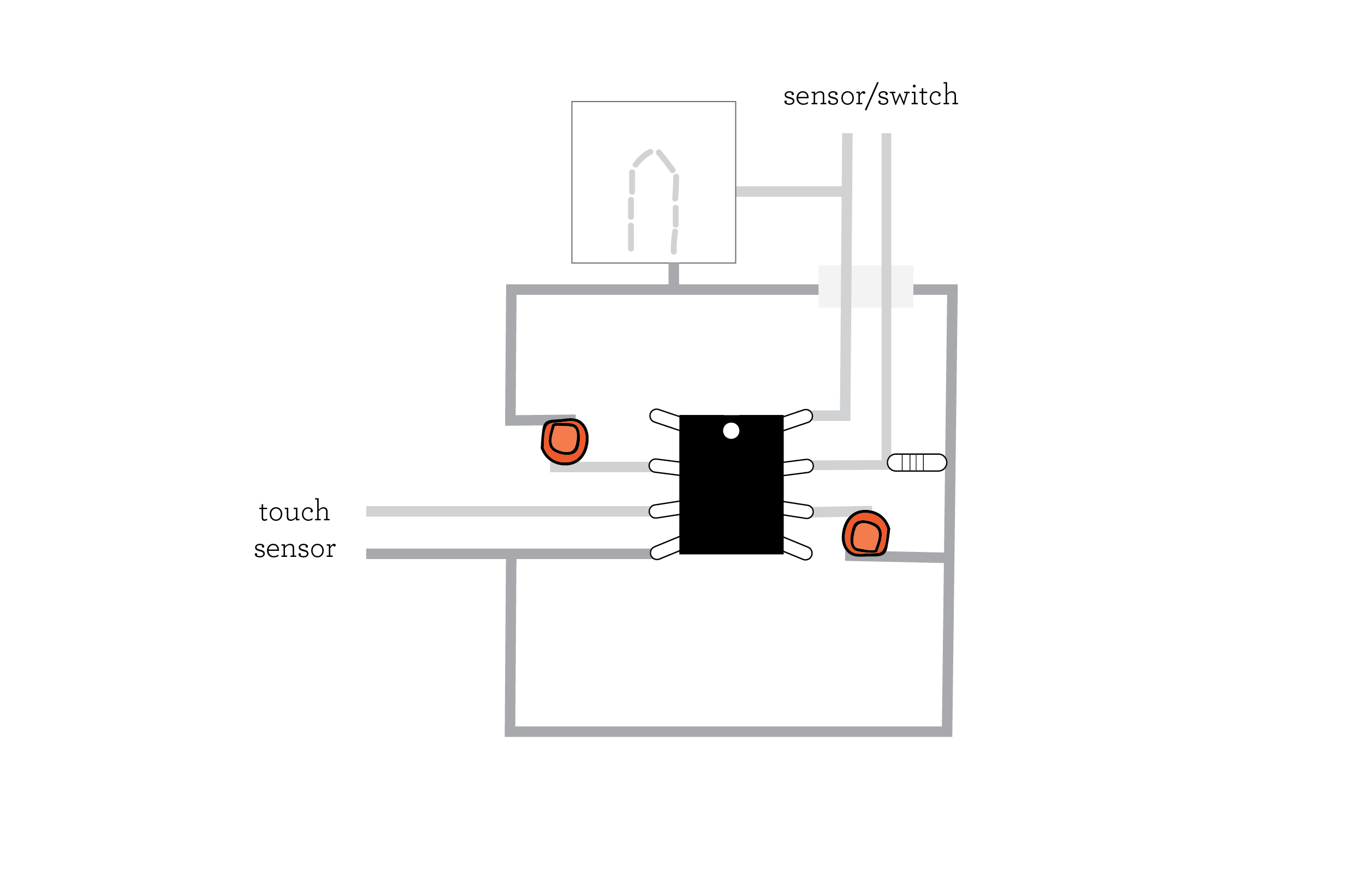 From an ATtiny workshop by Liza Stark.

Code for the ATtiny in the Soft Circuit#

IMPORTANT! When you want to use the original Arduino Board after having used the AT Tiny, you need to reset the programmer to AVRISP MKLL. 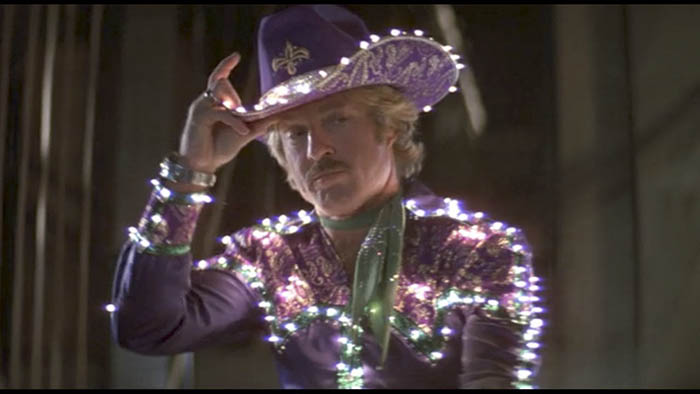 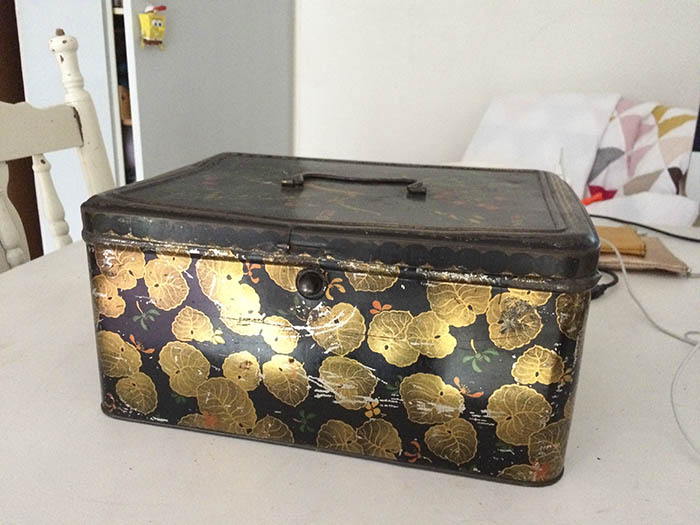 Last but not Least# 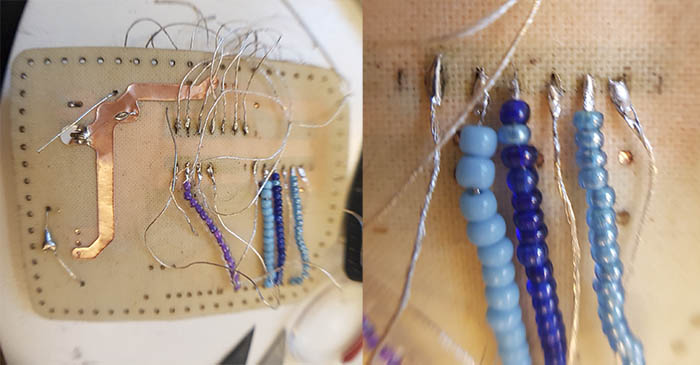 Very happy to see some of my mum’s old beads go into the ‘Wenduino’, the prototype for a soft microprocessor by classmate Wendy Neale.