What I did this week

The first one controls neopixel LEDs with a pressure sensor:

The second one is a fabric speaker controlled by the Arduino Uno:

How did I get there?

This week's lecture was the second one with Liza Stark, and it delved deeper into the different types of actuators we might want to use for our e-textiles projects: lights, sound, thermochromic inks...

Here are a few examples: the Ceres jumpsuit by Wearable Media, that lights up when asteroids are close to Earth; the telltale quilt by Liza Stark, a quilt that tells you its stories; and Jingwen Zhu's dress that uses thermochromic inks to create patterns and colors that transform based on a personal diary app data. 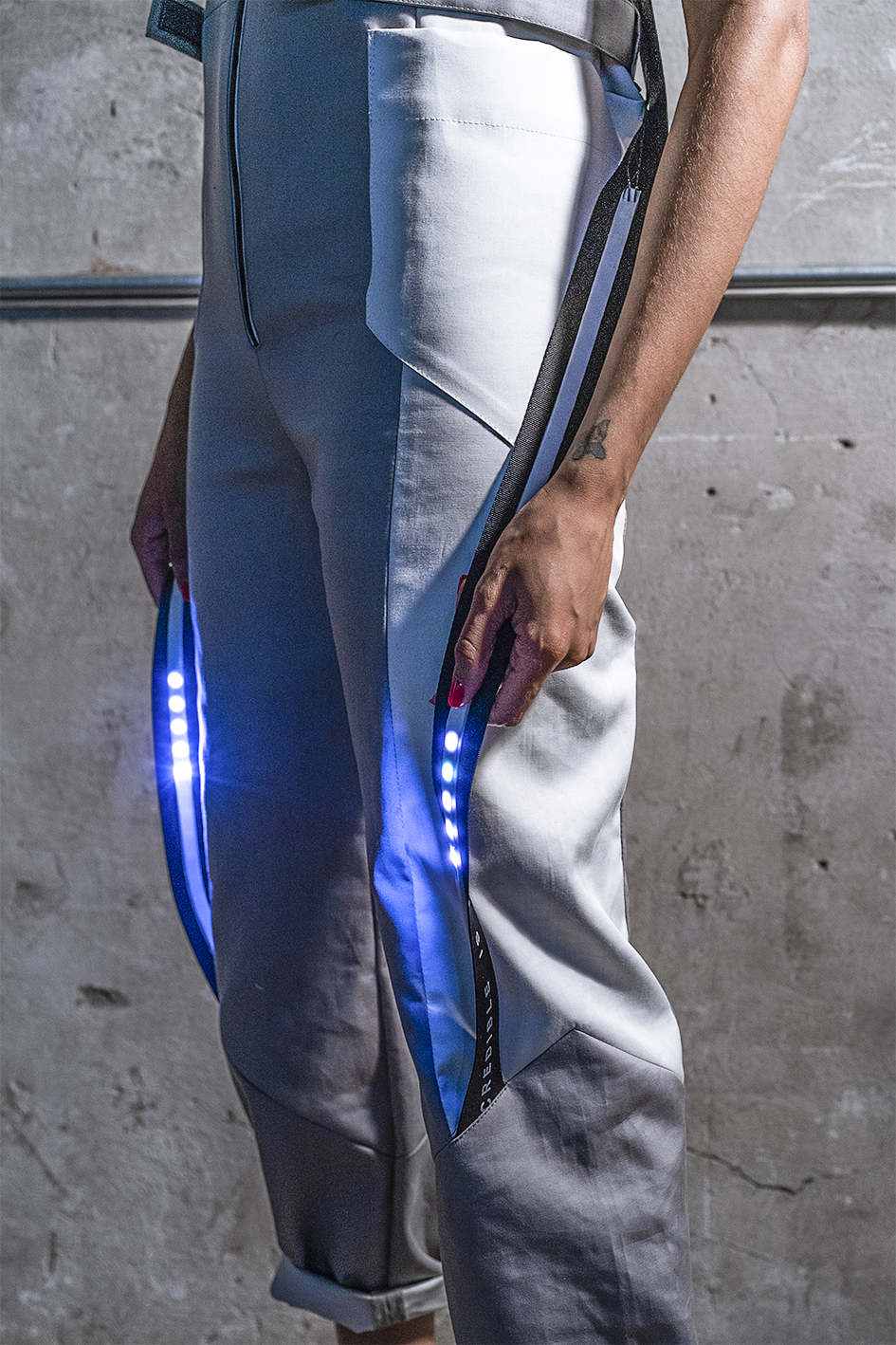 Emma's tutorial was really comprehensive on what we could do with the neopixels, and I had fun testing all the examples from the tutorial!

Initially I wanted to make a Swatch with neopixels controlled by a sound sensor I had at home: the KY-038.

I had already used it with the digital pin, to make an LED blink when clapping my fingers, but unfortunately I did not manage to get something consistent with the analog pin.

Trying to use the sound sensor with the neopixels

I wanted to have the lights be a certain colour under a threshold, and another colour and pattern over that threshold, but I was having trouble getting consistent values with the sensor. So instead I went with a fabric pressure sensor made with eeontex, and integrated in the swatch:

Here is the code I used:

I tried making fabric speakers with different materials: the first one with Madeira conductive thread made with the embroidery machine, the second one with copper wire and a couching thread, and the third one hand-embroidered with 3-ply stainless conductive thread:

The different coils I made to use as fabric speakers

Emma's tutorials were again very useful on how to use the speaker, the driver circuit and the Arduino. To construct the circuit driver, I mostly followed Liza's slides, and Jessica Stanley's explanations.

Creating the circuit driver and learning to solder!

Using the circuit driver with Emma during the first tutorial

Here is the driver circuit used with one of the speakers, the one that worked the best:

At first I used only a few 5mm neodymium magnets I had at home, and it worked! Really low, too low to record it, but it worked! So I bought bigger magnets, and this time I could record it, even if it is still really low:

Here is the video of the final test:

This speaker, which is the only I made which works, has a resistance of 8 Ohm, that I calculated while embroidering. I'd like to make a bigger one, but I'm not sure how to increase it.

For the moment, I use the Arduino to produce the sound, with the tone() function. You can find the code below, and download it here. I started from an example available in the Arduino IDE, the one in Digital/toneMelody.

In parallel, I started to follow Liza's tutorial on how to create an amplifier connected to an audio cable:

I haven't tried it, or even soldered it yet, because I did it from home, but it is the next thing I want to try!

I want to use the ATtiny for the neopixels swatch. I haven't done it yet, because our ATtiny delivery got delayed...!

📢 More speaker tests, and testing the amplifier to be able to use other sources of sound
🤖 Using the ATtiny!
📊 Working with data: I loved the projects that had a data-oriented approach, for example the jumpsuit linked to real-time asteroid data, or the personal diary dress.