This week we designed fabric modules that interlock with each other, learned about open source and zero waste fashion, and laser cut a lot of our modules to assemble them into a garment. 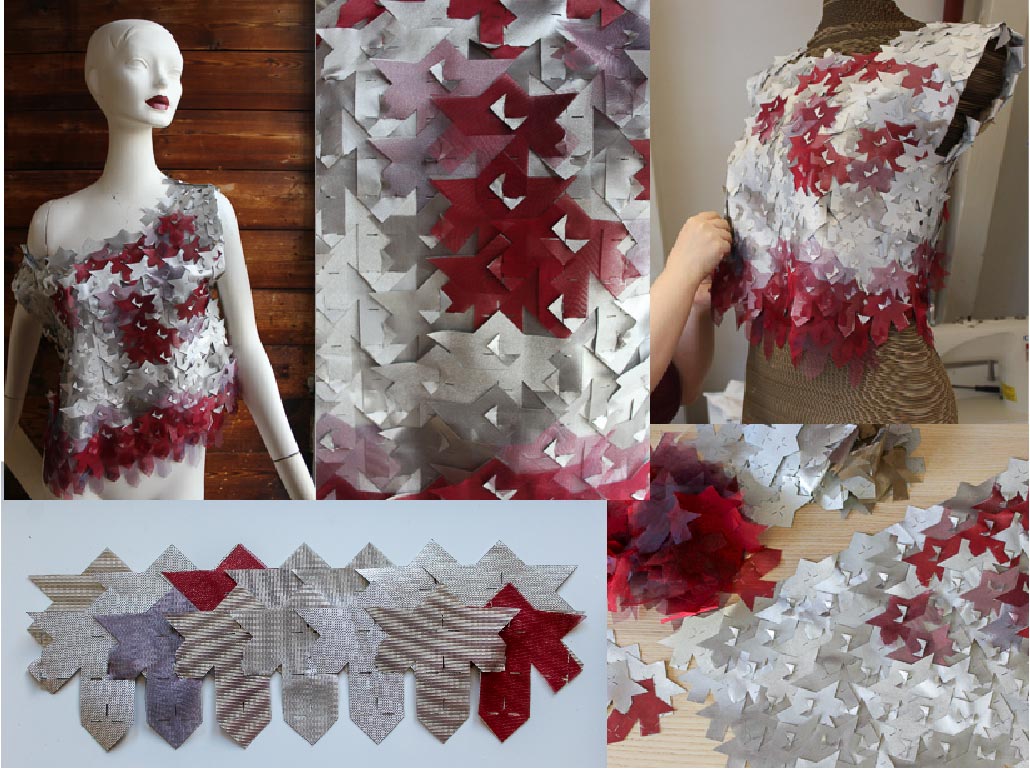 I designed a module inspired by autumn leaves. I experimented with different fabrics, and laser cut about 450 modules out of 4 different fabrics, which I then assembled into a simple top. Adobe Illustrator was used to design the pattern, the pieces were cut on a laser cutter, and assembled by hand.

The modules can interlock in a couple of different ways, and can be layered on top of each other, making it possible to add decorative modules, or to increase the thickness of the fabric. The garment is pretty fragile, and assembling it took quite a while, but I think the overall effect is nice.

The fabrics I used were a silver UV shielding fabric, a silver coated thin canvas, a red chiffon and a red/blue organza. Just one type of module, and no sewing! 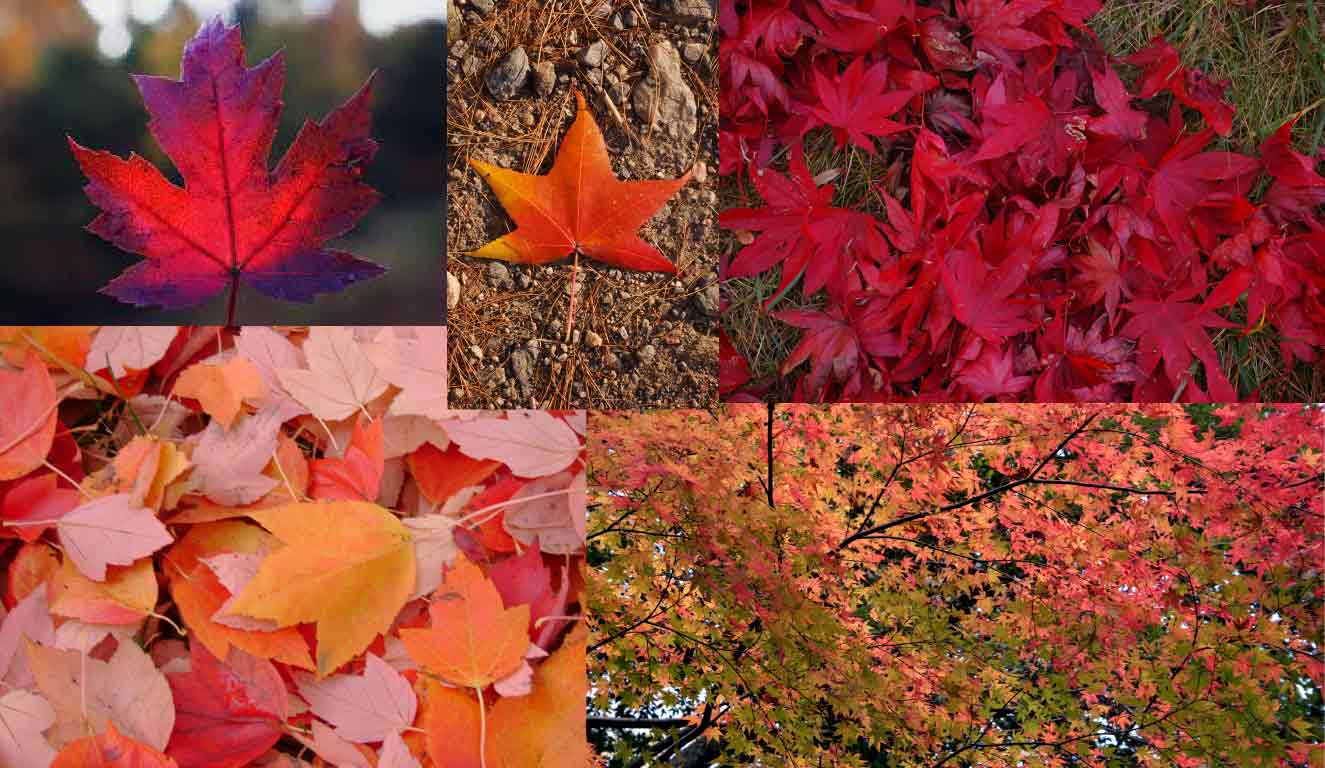 As it’s autumn in Amsterdam, and there are leaves falling from trees all over the place, I decided to make a leaf-inspired module. I really like japanese maple trees, but their leaves (top right in the image above) look a lot like cannabis leaves. That’s fine and all, but I wasn’t really going for a ‘420’ vibe, so I started researching other kinds of red coloured maples.

I was also inspired by ‘Fall’ by Birce Ozkan - a skirt with leaves that fall off in response to the wearer’s environment.

I sketched a couple of leaf designs on paper, cut them out, and cut slits in them to figure out how they might interlock. 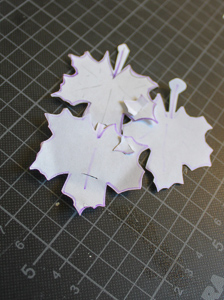 But I then decided that I wanted my modules to tesselate, i.e. if you take a bunch of the modules, you should be able to arrange them so that they all fit together neatly. Like this, which I used as my inspiration:

Images from Modularity in Medieval Persian Mosaics:Textual, Empirical, Analytical, and Theoretical Considerations by Reza Sarhangi, Slavik Jablan and Radmila Sazdanovic
The goal wasn’t to arrange the modules in this tesselating pattern in my final design, but to make the best use of material possible: using a tesselated pattern cuts down on scrap material

Digital design of the basic shape#

I recreated this abstract leaf pattern in Adobe Illustrator, by drawing a series of squares, editing some of them using the pen tool, and uniting them into one shape using the pathfinder tool:

Then I copied and rotated the basic shape to make the tesselation (using my very basic Illustrator knowledge ۹⌤_⌤۹).

As you can see, when the leaf shapes are arranged in the right pattern, more leaf shapes appear in the negative space between them. This means a) significantly less wasted material than if the shapes didn’t tesselate, and b) the pattern is quicker to cut on the laser cutter, as each line that’s cut is part of more than one shape. The image below illustrates the waste material (in blue) you get with a tesselated pattern, compared to a non-tesselated pattern. 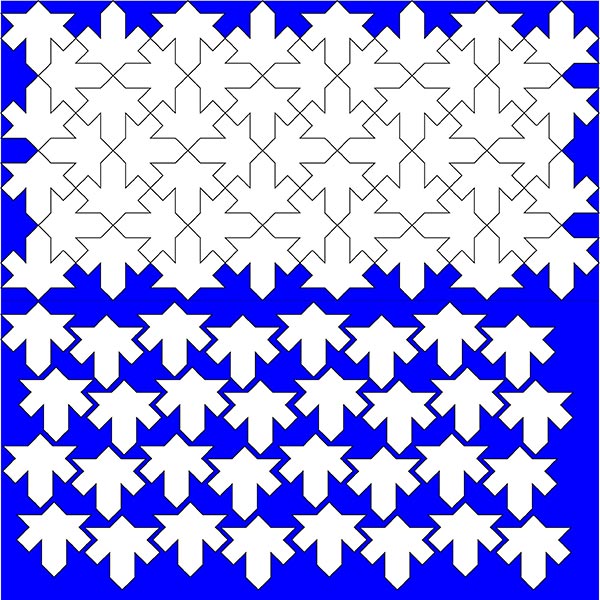 I decided to go ahead and cut out a bunch of my modules on paper, so I could get a sense of what size would work, and manually cut slits in the paper with a craft knife, to figure out how they should interlock. In Illustrator, I removed the fill of the shapes and set the stroke weight to 0.001 - if it’s higher, the laser will treat the stroke as a shape to be cut out, rather than a cut line to follow, and will cut your lines twice. This left me with something like this: 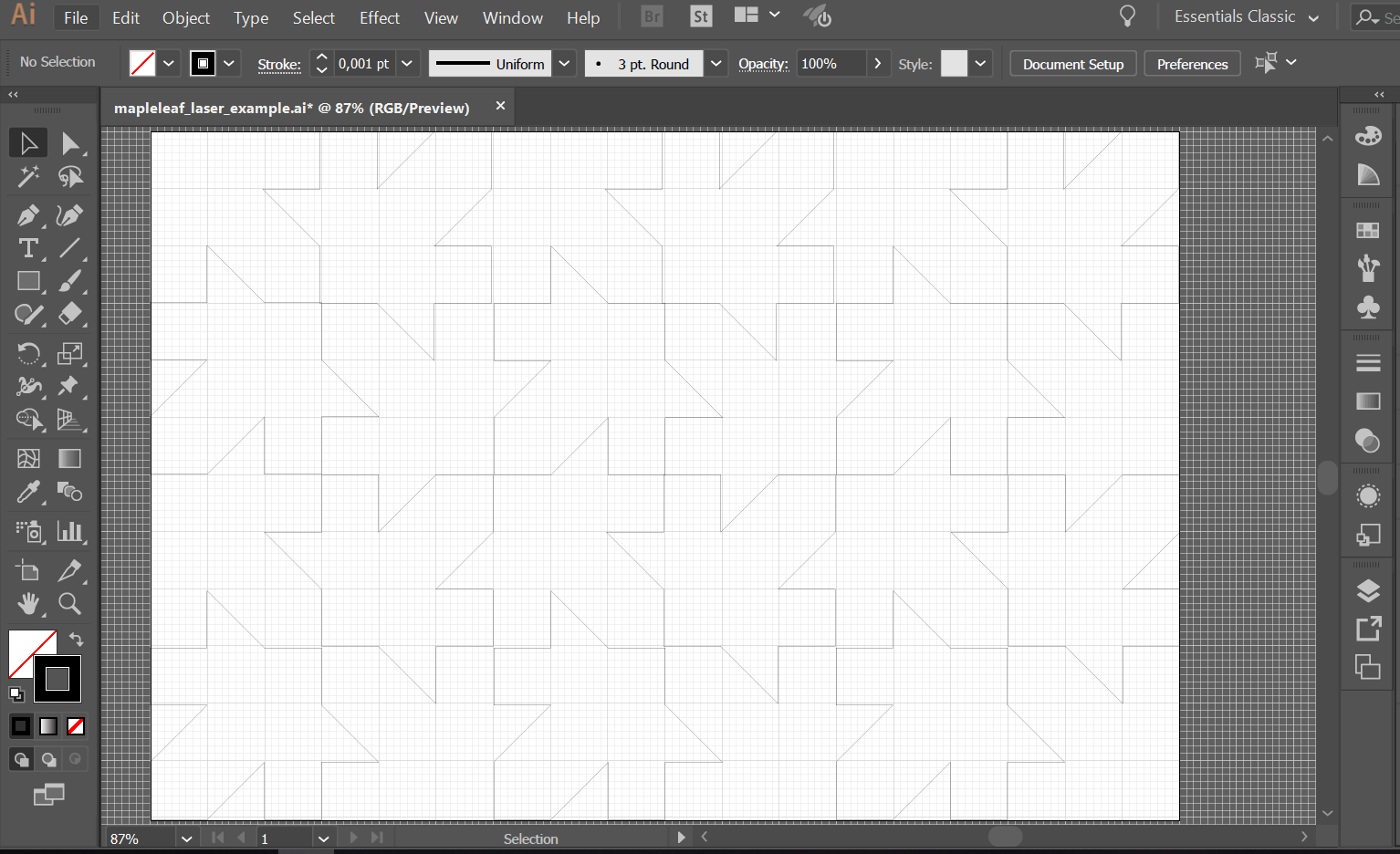 I saved this as an Illustrator (.ai) file in CS2 format, with all the options de-selected - this is what works for our laser cutter at Textile Lab Amsterdam. 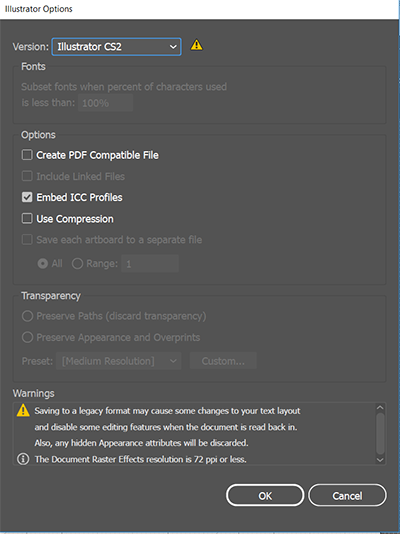 I taped a sheet of A3 paper to the laser bed with masking tape, and set the speed to 100, and power to 15 on in the laser cutter software. 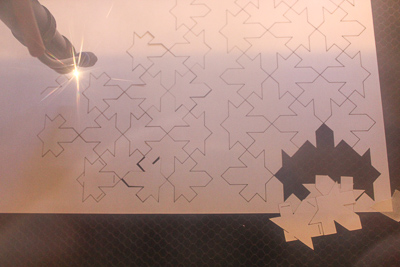 With the shapes cut out, I experimented with different ways of interlocking them: 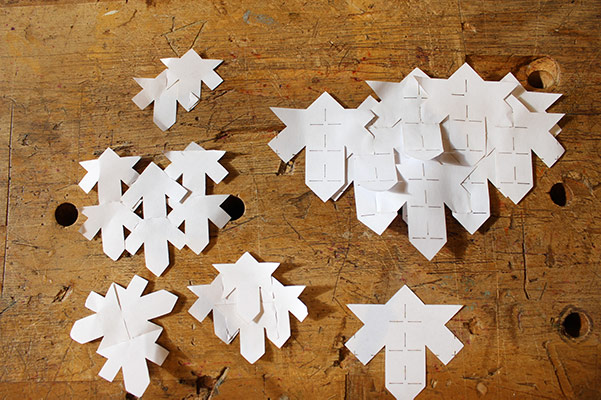 I decided on the design on the right hand side of the image: three sets of ‘slots’, aka slits down the middle of the module, and a ‘tab’ or arrow shape on either side. I chose this design because a) the pattern of the slots in the centre of the module loosely keeps with the ‘leaf’ theme, and b) this pattern allowed for the most flexibility, as there are lots of different ways that you can connect the module to others, and to itself (more on that in the Assembly section)

I adjusted the design of the module from the one one the left hand side (in the image below) to the right hand side. Having the module interlock in the vertical direction, instead of just horizontally, made it more structurally stable. And the slightly asymmetric design of the tabs on the final module was done so that everything would line up and allow two modules to interlock with each other in two places, as showin in the image below: 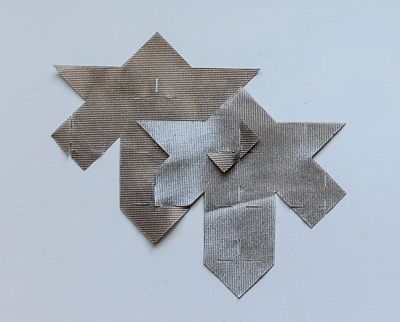 My first batch of modules were pretty small - around 3cm - and were a bit difficult to work with because they were so small. I tried a couple of larger sizes, and my final modules were around 7.5cm in diameter - big enough to work with easily, and so that I wouldn’t have to assemble thousands of modules!

I also needed to figure out the sizes of the slots and tabs. The slots would need to be large enough so that the tabs would fit through easily, but not so large that they would fall out easily. After looking at examples of modules made by previous students at TextileLab Amsterdam, and testing a few different variations, I made the width of the slots equal to the width of the neck, or narrow part of the tabs - 0.5cm.

First I tried a few lightweight, sheer materials, but found them too flimsy for my particular module design. I liked the idea of having everything made from leather, but after cutting some samples in different leather (and leather-like) materials, but after learning just how bad laser cutting leather smells, and seeing how bulky leather modules would be, I decided to change course! 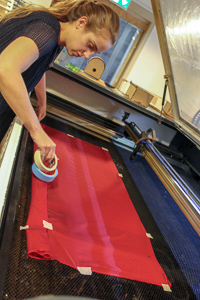 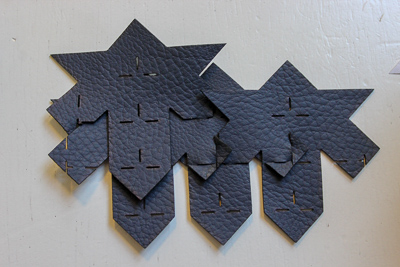 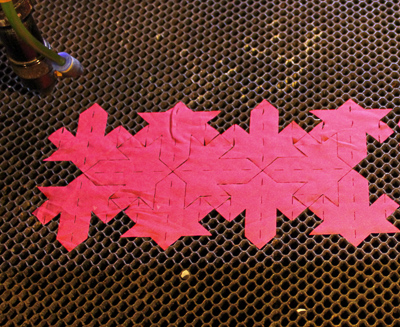 Cecilia gently hinted that I should use silver fabrics, because she thought my module looked like armour. I eventually agreed with her, and used a combination of a silver UV shielding fabric that she had, and a silver coated thin canvas (that we found at the bottom of a drawer. I also realised I could add some decorative modules in sheerer fabrics that weren’t strong enough to provide structure: I used a red chiffon and a red/blue organza 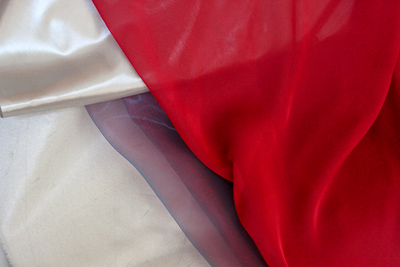 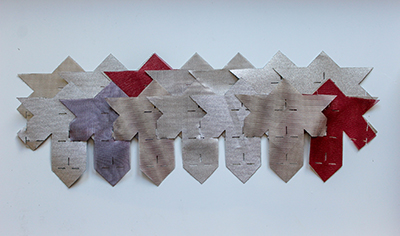 After cutting a few modules, I realised that I neeeded to iron the fabric to remove creases, both to make sure that my modules would be nice and neat (and nobody wants to iron several hundred modules individually), and to make sure that the creases wouldn’t cause the fabric to stick up in the laser cutter and be cut incorrectly. At TextileLab Amsterdam we have an industrial steam iron, which I had never used before! Here is a handy video on how to use such an iron. I kept the temperature low - in the ‘nylon’ range which worked for all of my fabrics.

With my fabric prepped, I started laser cutting. You can find a link to my notes on using a laser cutter at the end of this page. I made sure to make the outline of the module a different colour to the slots and tabs - this is was to make sure that the slots and tabs were cut in the right position, as if the outline is cut first, sometimes the module can fall, slide, curl, or otherwise move out of position. Cutting the inner details first makes sure that everything is cut in the right place.

I cut my modules in batches of 60 at a time (as there were several of us all trying to cut our modules, and I didn’t want to hog the laser cutter by doing bigger runs!), which took approximately 16 minutes to cut. Irene and I were using a lot of the same fabrics, so once she was ready to start laser cutting, we combined our files into one and cut both our modules at the same time.

We started off with these settings for thinner, sheer fabrics:

And for the silver fabrics, I used:

As the day went on, we realised we still had a lot of laser cutting to do, and not a lot of time to do it. So we doubled the speed and doubled the power, to keep the same overall intensity:

Often when cutting fabric, going over speed 100 can result in wiggly lines. But as we were just cutting short lines, this seemed to work ok! 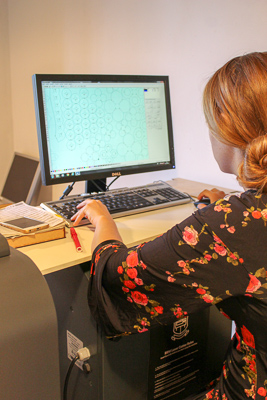 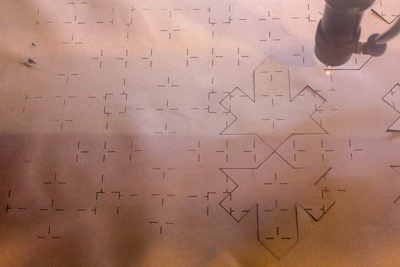 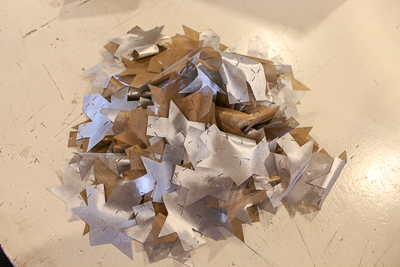 Once I had laser cut all my modules, I had:

How to connect the modules#

There are four main ways to connect the modules:

Side-to-side: where the tabs slot into the middle row of slots in the module 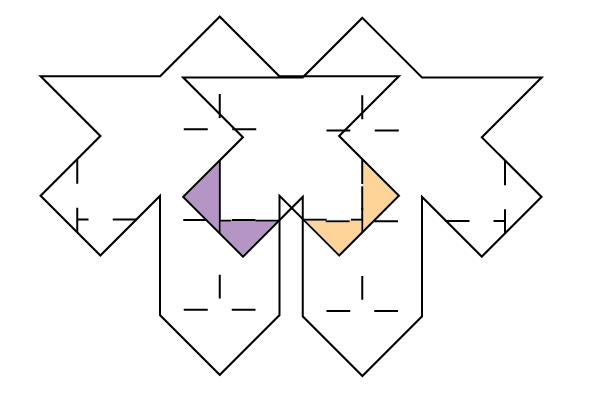 Self-interlocking: the tabs slot into the middle row of slots in the one module. This can be used for decorative modules, or to neaten the edges of modules at the edge of a garment: 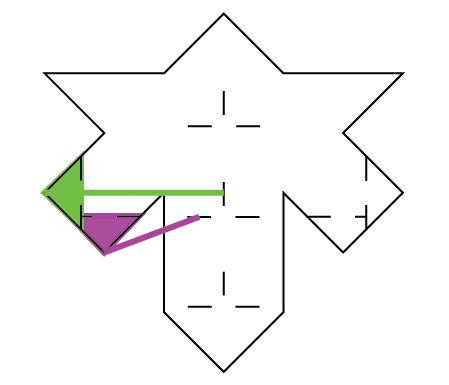 Right-angled: This isn’t as secure as the other methods of interlocking, as only one tab connects the two modules. But it’s handy for creating corners! 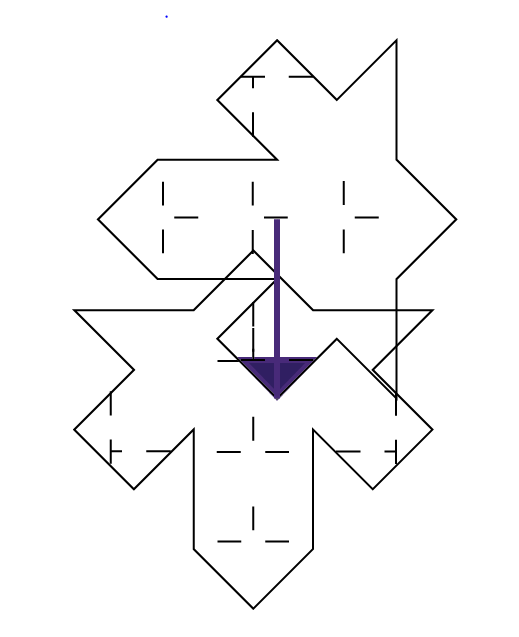 Side-to-side looks more straight forward, but alternating turned out to be more sturdy, because the modules are connecting to each other in two places, rather than just in the middle. So that’s what I used for my garment!

Getting on with it#

Once I had decided to assemble the modules in an alternating pattern, I just had to get on with assembling them, row by row. I randomly mixed the two silver fabrics, and added the red chiffon and organza for decoration on top.

Two days later, I had a strip of fabric approximately 1.5m x 0.75m. I decided to split this into two squares, and then made two small rectangles to create thick shoulder straps (I did not document this part particularly well, so I hope this makes sense). I then placed the garment on a mannequin and interlocked the modules at the sides to close the garment.

We then decided to try putting the garment on another mannequin - the second mannequin has a much smaller frame so the garment fit her quite differently, but the modular nature of the whole thing made it easy to adjust so that it fit her. Handy! 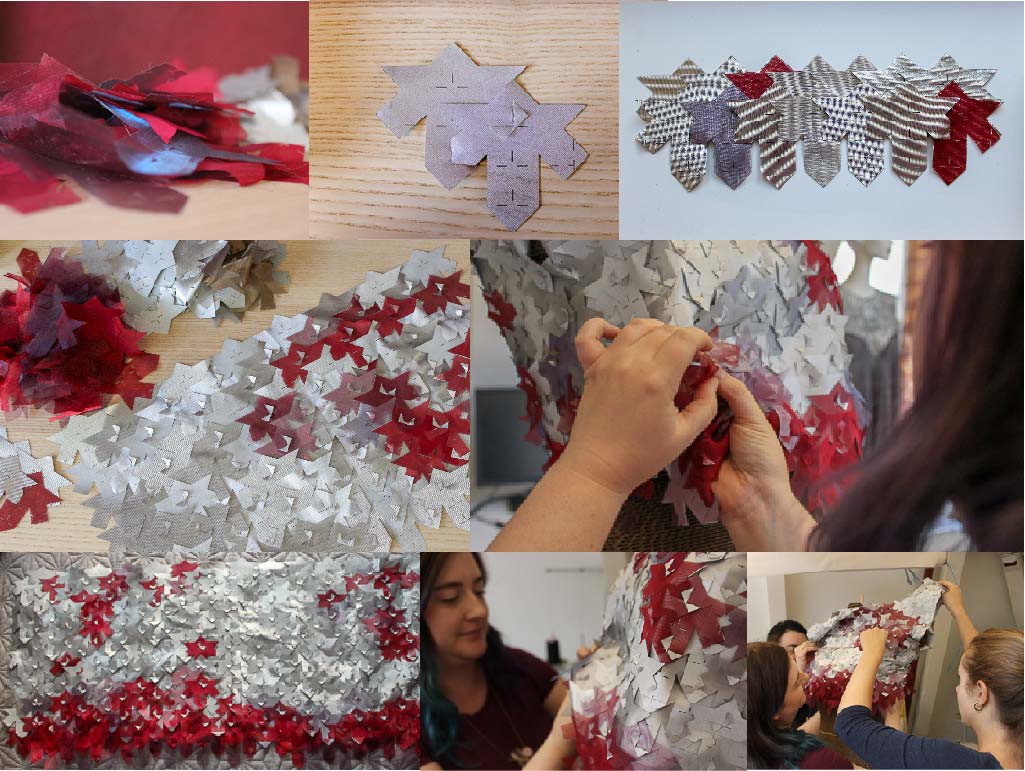 Thanks to Teresa van Twuijver for some of these images!

My housemate’s cat assisted me in this project, by sitting on things at every possible moment. This was not helpful. 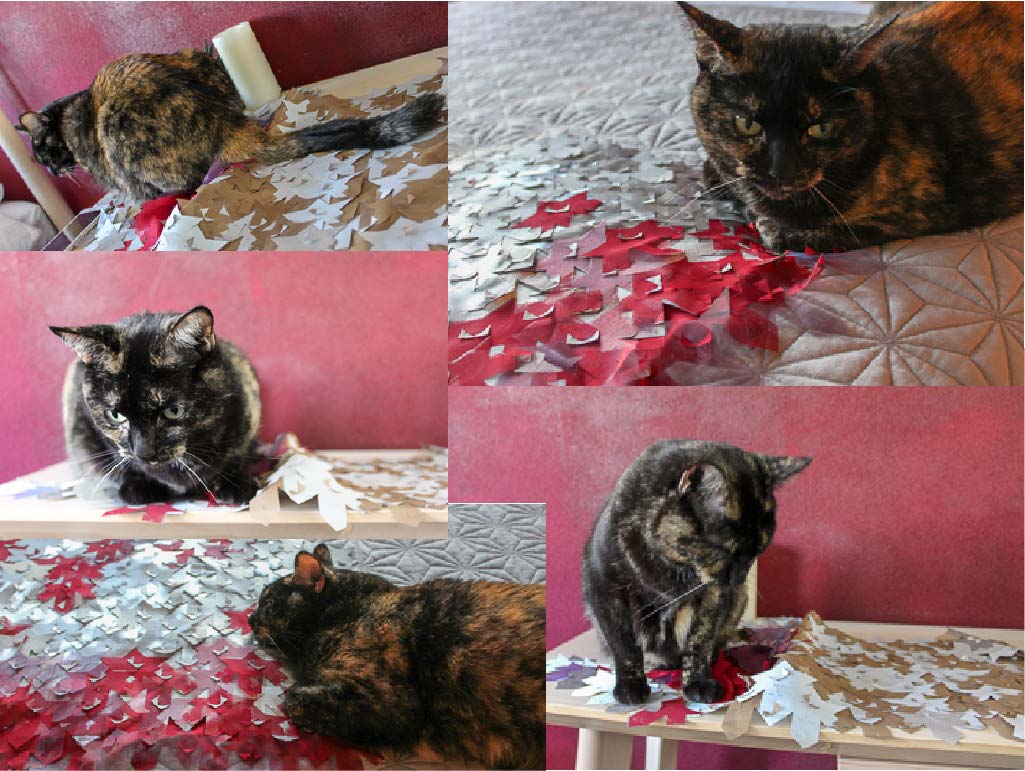 If doing this again, I’d like to experiment with different fabrics, to see if I can make a more stable garment that’s easier to assemble.

One thing I thought about doing, but decided against because it would have been too much work, was to use the modules to encode binary data. What do I mean by this? Well, if you interlock the modules side-to-side, as in the image below, and use two different fabrics, you can use the different fabrics to represent ones and zeros. 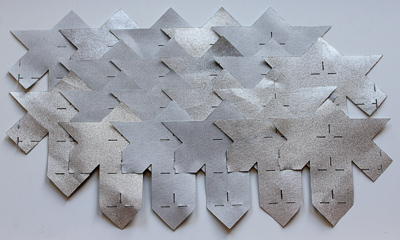 If we convert these binary numbers to decimal, we get:

Aka 4/7 of my name! I thought it would be cool to have the whole garment encode text, or some other data, but I thought this project had enough complexity already (◔ ◡ ◔)

How long it all took#