This week I made two soft sensors out of different types of conductive thread. Both are activated by pulling or tightening strings.

For my digital sensor, I made a switch that closes when fabric pleats are pinched or pulled together. It’s a momentary switch if pinched together with fingers, or a toggle switch if a thread is pulled through the pleats, keeping them closed. There are three breaks in the circuit, and a row of 3 leds lights up when all three breaks are closed. Here’s an overview of the steps:

To make this you need:

I folded the fabric back and forth into a mountain fold pattern, then pressed down on it with an iron, and let it cool in the folded shape. Then I threaded an embroidery needle with red embroiery floss, knotted it at one end, and passed it through the top of the fabric. 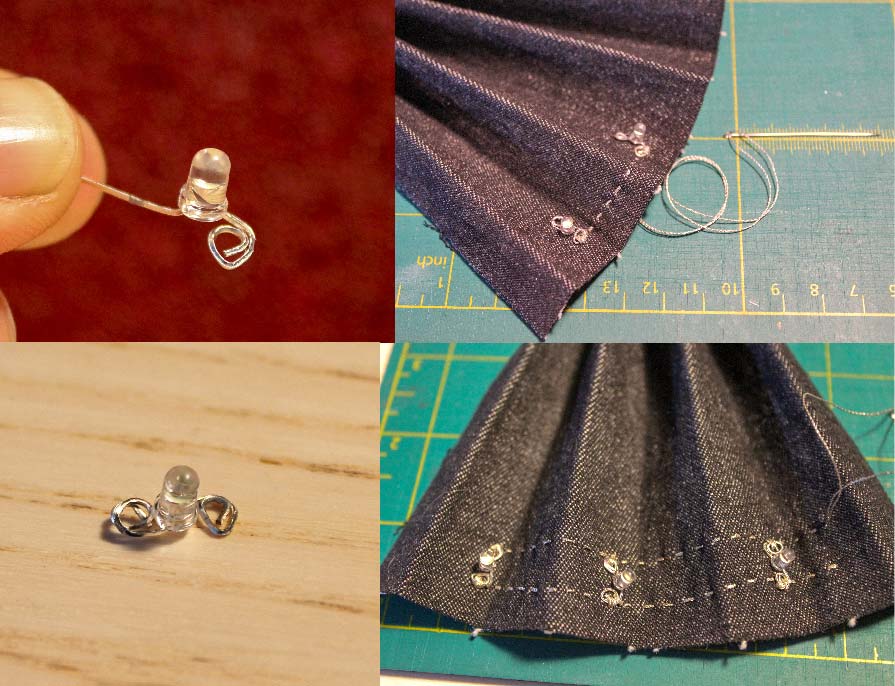 When this was finished, I stitched from one side of the switch to the negative side of the leds, as both of these would be connecting to the ground pin on the Arduino.

Right at the end I remembered that I’d need to add a resistor in series with the leds, to limit the amount of current flowing through them, and make sure they didn’t burn out. For this I ideally wanted a resistor of a few hundred Ohms (around 200), but I was doing this part at home and the smallest value resistor I had on hand was 1000 Ohms. This still worked, although it reduced the brightness of the leds a bit - I added it to the end of the ground trace for the leds. 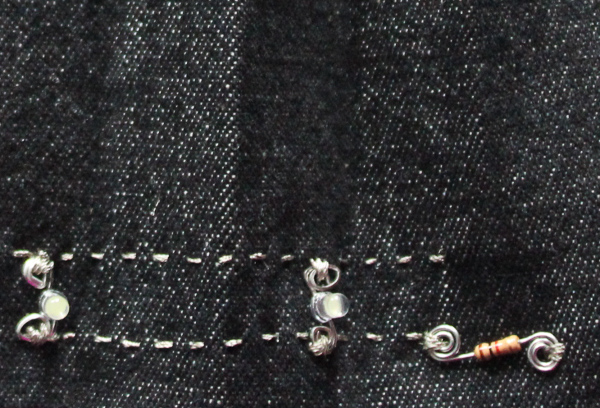 I also painted over any conductive thread knots on the reverse side of the fabric with clear nail polish, to prevent the threads from fraying and coming undone. I connected alligator clips to the knots at the end of my conductive thraed traces, to interface with that Flora. 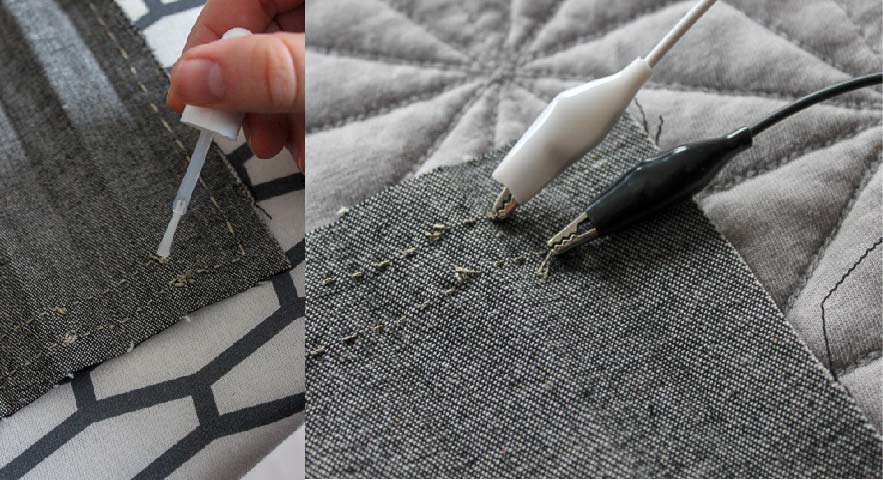 This switch can be used to control the leds without an Arduino, but let’s use an Arduino anyway! For this project I decided to use an Adafruit Flora, rather than an Arduino Uno, as I had a couple of them at home, and I find them easier for e-textile prototyping, as the pins have large pads that alligator clips and clip on to easily. I used pin 6 on the Flora to control my leds, and pin 9 to control my switch. In this sketch we’re only dealing with digital data - 1s and 0s / on and off - so we just need two ‘digital’ pins. You can see a pinout diagram of the Adafruit Flora, showing which pins are which, here.

Uploading to the Flora#

The Flora connects to your computer with a usb to micro-usb cable. If using Windows, you’ll also need to install drivers, and add the Flora to the list of boards the Arduino software knows how to upload to. Here is a great guide to doing all of that!. when you’ve done that, go back to the Arduino IDE, and in the Tools menu, go to Board, and select ‘Adafruit Flora’. In Tools -> Port, make sure you have selected the port that your board is connected to.

When I had compiled and uploaded the sketch to the Flora, I disconnected it from my laptop and used a 2 coin cell battery holder to power it. I connected alligator clips to my conductive thread traces, and the switch works!

For my analog sensor I made a variable resistor based on a corset-style laced up design. 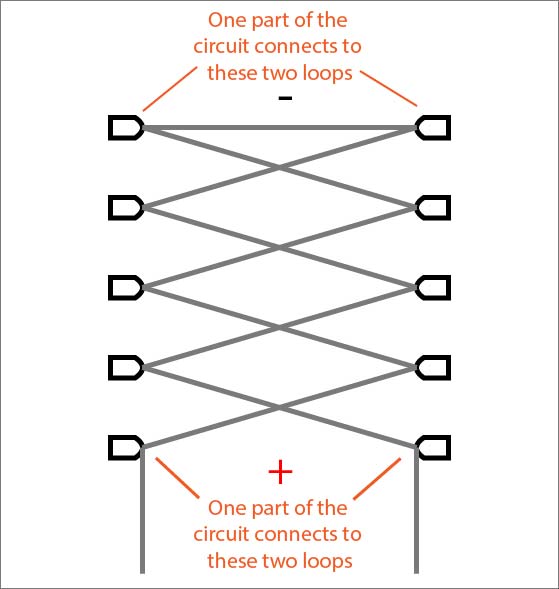 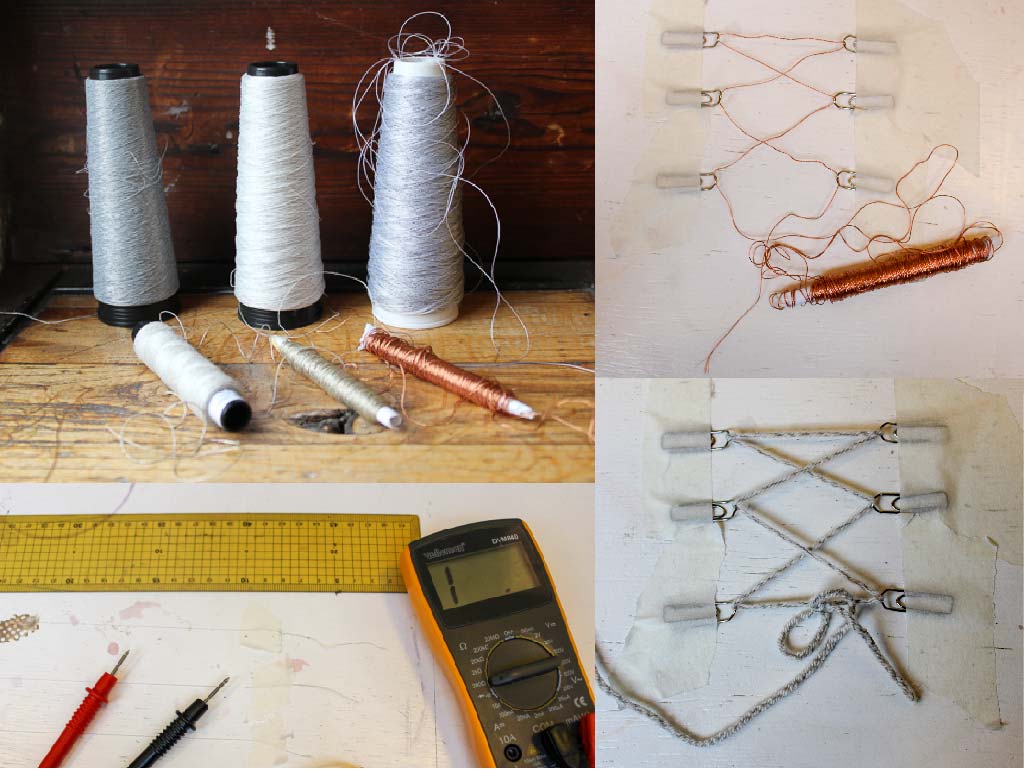 I started out by going through the conductive threads we had at TextileLab Amsterdam. I wanted to find out which threads were the most resistive, and so would work well in a variable resistor / potentiometer kind of sensor. I spent a few minutes taping the threads to the table, and using a multimeter to measure the resistance of each thread over a 10cm length of thread.

I then learned that someone had already measured and charted all of this already, so I stopped ಠ‿ಠ

The next step was to make a rough prototype of my design, to see if it worked before sewing anything (because nobody likes doing a bunch of sewing and then finding out that the whole design is flawed). I found some paperclips, taped them to the table, bent one end of them upwards so they would stick up from the table surface, and then tried lacing it with a couple of different threads. I was looking for a thread that would:

I decided to use a stretch yarn that’s partly composed or regular yarn, but has conductive threads running through it. It’s more conductive when stretched, which is great for this project, because it meant I could adjust the resistance by tightening the lacing.

Next, I moved on to a fabric prototype. I picked a shiny (and relatively stiff) black fabric to build the sensor onto, and experimented with different types of fabric loops to lace the yarn through. I liked the idea of having every component of the sensor be soft, rather than having metal loops. And it was important that these loops be conductive, as I wanted to keep the yarn completely detachable, and have other parts of the circuit connect directly to the loops.

So, I tried sewing loops out of a linen/steel thread, but that was both a bit tedious to sew, and also didn’t make a great electrical connection with the conductive yarn. Next I tried cutting small rectangles of conductive fabric and sewing them into loops, and at this point I thought I was on to a winner, as it was easy to pass the yarn through the loops, and it made a good electrical connection. 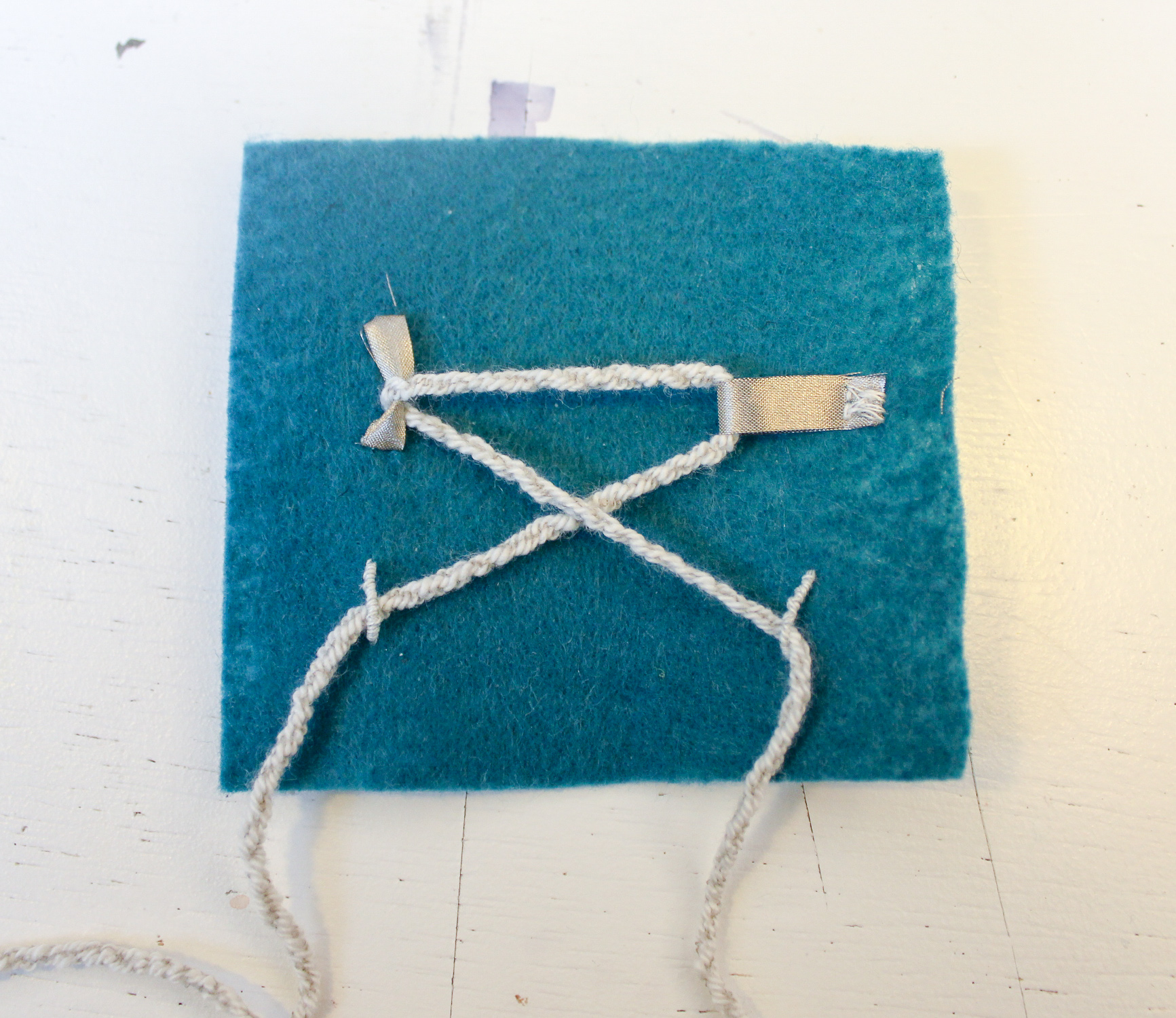 However, when I sewed a whole bunch of these fabric loops and then tested it, I found that yes, it worked as a variable resistor, but unlike with my prototype with paperclips, I couldn’t pull the thread through the loops easily to tighten it. This being a key (and fun) feature of my sensor, I decided to abandon the fabric loops, and figure out a way to make metal ones.

I did do a couple of measurements with my reject prototype, showing the variation in resistance you can get when tightening the yarn. From left to right, I tightened the yarn in stages, and on the multimeter you can see the number - resistance in Ohms - dropping, which means that conductivity is increasing, and more electricity can flow through the yarn.

For the final version of my sensor, I altered an element of my first rough prototype: I got more paperclips, and used a pliers and a wire snips to turn them into d-rings.

I put my fabric into an embroidery hoop, used two strips of masking tape to mark out the middle part of the sensor where the yarn would go. I stitched the d-rings onto the fabric, using grey embroidery floss. then I laced it up with the yarn, and it worked! Using my multimeter, I measured the rough maximum (loose yarn) and minimum (tight yarn) resistance values, as I’d need these for later (add these in!). 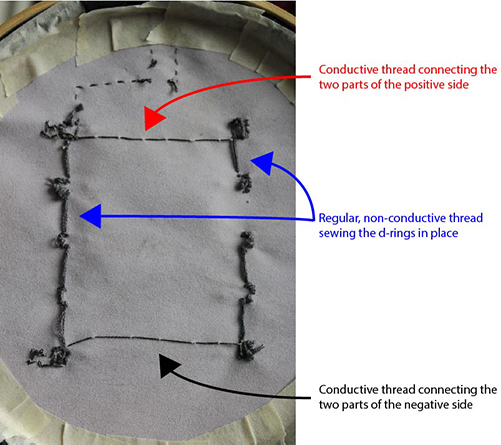 How to use the sensor#

This sensor is basically a variable resistor: as the yarn tightens, or depending on how the yarn is laced, the resistance between the bottom point and the top point is different. I used my sensor to control the colour of an Adafruit Neopixel (an addressable RGB LED, but more on that later), and to do that we need to do a couple of extra things with Arduino and resistors.

The value of the resistor is important! My variable resistor ranges from roughly 200 Ohms to roughly 600 Ohms, depending on how tight the yarn is laced. I used a 500 Ohm resistor as my voltage divider resistor, as 500 Ohms is close-ish to the average resistance of my sensor. If one resistor is much higher than the other, e.g. I used a 10k resistor instead of a 0.5k one, then the voltage divider doesn’t work well for reading sensor data.

Want to know more about how voltage dividers work? Sparkfun have an explanation here.

Reading the sensor data with Arduino#

Arduino has an example sketch called ‘AnalogRead’ which formed the basis for my sketch. The code below is adapted from that sketch, and just reads data from the sensor, and prints it to the serial monitor every 200 ms.

When this is uploaded to the Arduino, click the magnifying glass icon in the top right hand corner of the Arduino IDE, or go to Tools -> Serial Monitor. Here you’ll see a stream of numbers - these are the voltages that the Arduino is reading from your sensor. What I did then was:

These values become important when we add the code for the LED!

Next I added an LED to control with the sensor. For this I chose to use an Adafruit Neopixel. Neopixels are addressable rgb leds, which is a technical way of saying a) you can chain a bunch of them together but still control them individually from one Arduino pin, and b)they each have a red, green and blue led in them, each of which can be controlled separately, to create the full range of rgb colours. They’re more expensive than regular leds, and a little bit more work to use, but for some applications, they’re definitely worth it!

The Adafruit neopixel uber guide is a good place to start learning about Neopixels, but for our purposes, what’s needed is a couple of extra lines of code, and a library that you can get and install here

To control a Neopixel it needs to be connected to power, ground, and an additional Arduino pin that tells it what to do (be on or off, what colour to show, etc). I stitched the neopixel onto the fabric above the sensor, and stitched three conductive thread traces:

Here’s a kind-of-circuit-diagram to make all that a bit clearer: 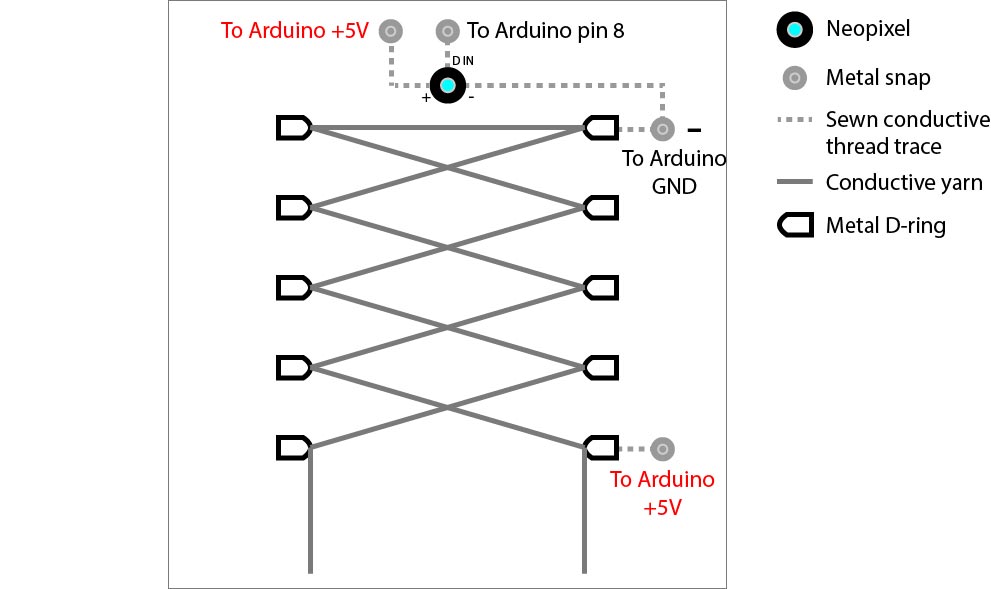 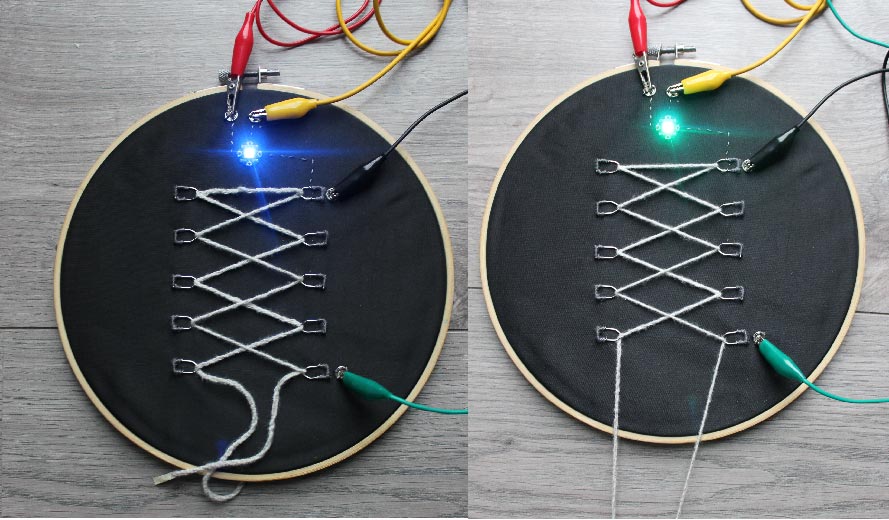 Here’s the code I used to control the Neopixel with my sensor:

There’s a lot happening here! What it’s doing is:

This means that when the sensor is laced tighter, the led looks more green. When it’s looser, it looks more blue! Here it is in action:

I had some conductive rubber at home, so I made a small extra version of my sensor, using conductive rubber for the lace, and metal washers as the loops. I sewed the washers onto the fabric using purple cotton thread. Ultimately I liked the look of this version of the sensor, but the conductive rubber had to be pulled very tight in order to make a good electrical connection with the washers. This could work pretty well in a tight garment, but on a standalone swatch it wasn’t so successful! 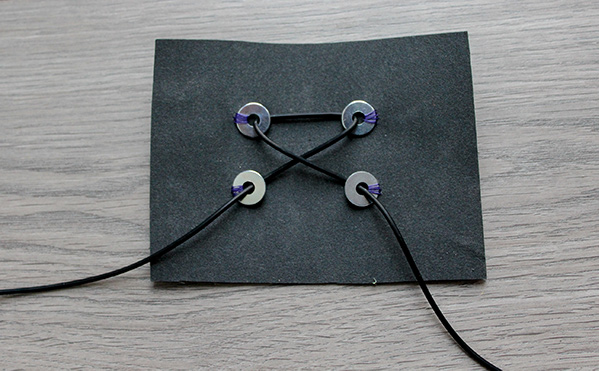 For part of this week I used a Dccele Arduino clone - this is a board that closely resembles an Arduino, and uses the same software and a lot of the same electronic components. BUT using a clone, rather than an original Arduino, sometimes means you need to jump through a couple of extra hoops to get it to work. In this case, you need to download and install drivers - I got them from here. When installing the drivers, it’s important that the device (your Arduino clone) is plugged in to your computer, otherwise the driver installation will fail!