1. State of the art, project management and documentation¶

This week I didn't really work on defining my final project idea. I've been sick for a few days, so just tried to keep up by doing the assignment for the week and building the documentation structure...

I'm a somewhat familiar with some of the tools used like a bit of github, markdown, terminal, and other tools for version control like Mercurial. So that helped but haven't used them all together in this way. So I had some fun customizing and browsing around.

This week's research mainly consisted of learning these tools using the tutorials provided and some google. It was nice, I'm liking this way of documenting! I've decided on a way to organize my files and am looking forward to building this documentation in the next few months. Documenting is something I like doing, because it helps me keep the new skills and insights I've gained fresh and actually usable. As in: being able to redo things I did in the past. That said, I can get a bit wordy doing it, trying to get all the details in, but it's coming from a good place ;)

"Consider the possibility of an honest mess" - Co-Star astrology app

Setting up the SSH key¶

Tried to rush it and left the default email in by accident. Whoops! Deleted the key and generated a new one with the terminal commands provided and popped it into the settings in Gitlab, using this tutorial for [generating an SSH key] (https://gitlab.fabcloud.org/help/ssh/README#generating-a-new-ssh-key-pair)

* I notice I'm becoming one of those people who writes documentation but doesn't explain the steps that already feel "normal" to me. Hmmm. I'll have a think to think what I think about that.

Later on I started using my Github Desktop app for a bunch of other stuff and my connection stopped working. I couldn't figure it out so I deleted the repository and cloned it anew over http. This tutorial by Shedrack Akintayo explains how to use access tokens push without having to re-enter your password when pushing over http. Amazeballs, thank you Shedrack!

I customized some basic stuff to change the look of the page. I love the font Karla, we use it for everything where I work, so I'm using it here too. I think you can basically look up any Google Font and use it. I liked the idea of having a special font for code, so I specified one for that as well. Find a Google Font here

Teal is my favourite color so, I used that for now, I found the name of the color codes here: Squidfunk's tutorial

* I have to say again: I'm really liking markdown and Gitlab

Ah yes! I will make a favicon but not right now, so just put the line there and will uncomment it once I've created and uploaded one.

And this is the result! Kaleidoscopic, isn't it...

screenshot of the page you are looking at

Since I'm working on a book project where I'll be using some of these tools as well, I also tried cloning my repository into the GitHub Desktop app (see downloads below).

You need to fetch the URL provided in the back-end of the project using the SSH dropdown (see image). Then I edit my markdown files using Macdown, a nice open-source editor that gives you a preview as you write (without styling though).

Github Desktop app to commit and push to git locally, bypassing the browser (using SSH), and here you can find MacDown, the markdown editor.

It's pretty straightforward, you go find the files locally and them edit them with an editor. And it tells you whether you have any commits that need pulling (when changes were made somewhere else) or pushing (when you make changes locally but haven't updated the master repository yet). Nice and easy! I also loved learning Mercurial on the command line though (forever grateful @Zaerc) I'm used to Brackets from back when I did Fabacademy. Oh sweet memories from 2015.

But for another project I'll be using MacDown, which gives a nice simultaneous preview! Pretty nice too. Let's see which one I'll end up using.

I really prefer to work with my content offline actually, particularly images. I remember now that images need to be compressed to no more than 100kb, so I have to do that even for a screenshot. I use Photoshop for this and export for web. Which is fine, but it's quite some file hassle because I always forget and then I have to go back in and do it later. It's nicer to do that all locally and commit using the desktop app. At first my images didn't show up at all. I'm wondering if the makers of the templates put a limiter on large images? That would be so clever.

Yes! I had my first conflicting commit between the remote repository and my local one. How do I resolve this.... on the Github Desktop app you get an error when you want to commit a change that conflicts. Then you can click to open the file. It adds these conflict markers so you can see exactly where the problems are:

Then you keep the code you want to keep, delete the conflicting code and the markers and save the file. This support page was helpful. The desktop app recognizes when the conflict is solved and allows you to commit again. Yay!

State of the art & inspiration¶

I also really liked her experiments with tesselation in the Textile as Scaffold week. The slow movements the textile creates are really nice to watch.

And also her voronoi for computational couture are so cool. She printed these shapes on stretchy fabric, making the textile pull itself into a 3D shape.

And the pleat switch and this sensor below. OMG Jessica stop it nowwww I'm totally fangirling your fabricademy page. This makes me think I will really enjoy the electronics work in the next few months.

Her circular fashion designs are also quite cool!

And many many more...

This is something I've been obsessed with for a long time. I think the innovative ways of thinking about the malleability and unstable nature of the body and gender is super interesting and made me fall in love with this art form. I do it myself sometimes too :) No RuPaul quote is lost on me (we're all born naked and the rest is...you know the rest). I'd love to take as many assignments as possible closer toward something that might be applicable in the context of the art of drag to develop into a larger project later. I imagine eco-aware drag could be a very interesting avenue to explore. In the meantime, I'll summarize as: go big, or go home.

A local house who did an amazing show at last year's superball, with over the top LED powered gowns. I mean, I don't really like LED strips so much, especially not in clothing but context IS everything.

Or drag performer Milk in this knitted number by Hana Quist. Oh yes.

Such as Aynouk Tan - you can worry about the clothing mountain - or just dress up as one. I think her thinking and personal style are really out there.

Aynouk Tan with a mic and smiling lady in black

I bow to Valeska Jasso Collado for her graduation collection

These theatrical garments have an amazing genderclowning vibe about them, they remind me of 1920s Bauhaus costumesand I love it! She folded latex-covered foam into geometric garments. 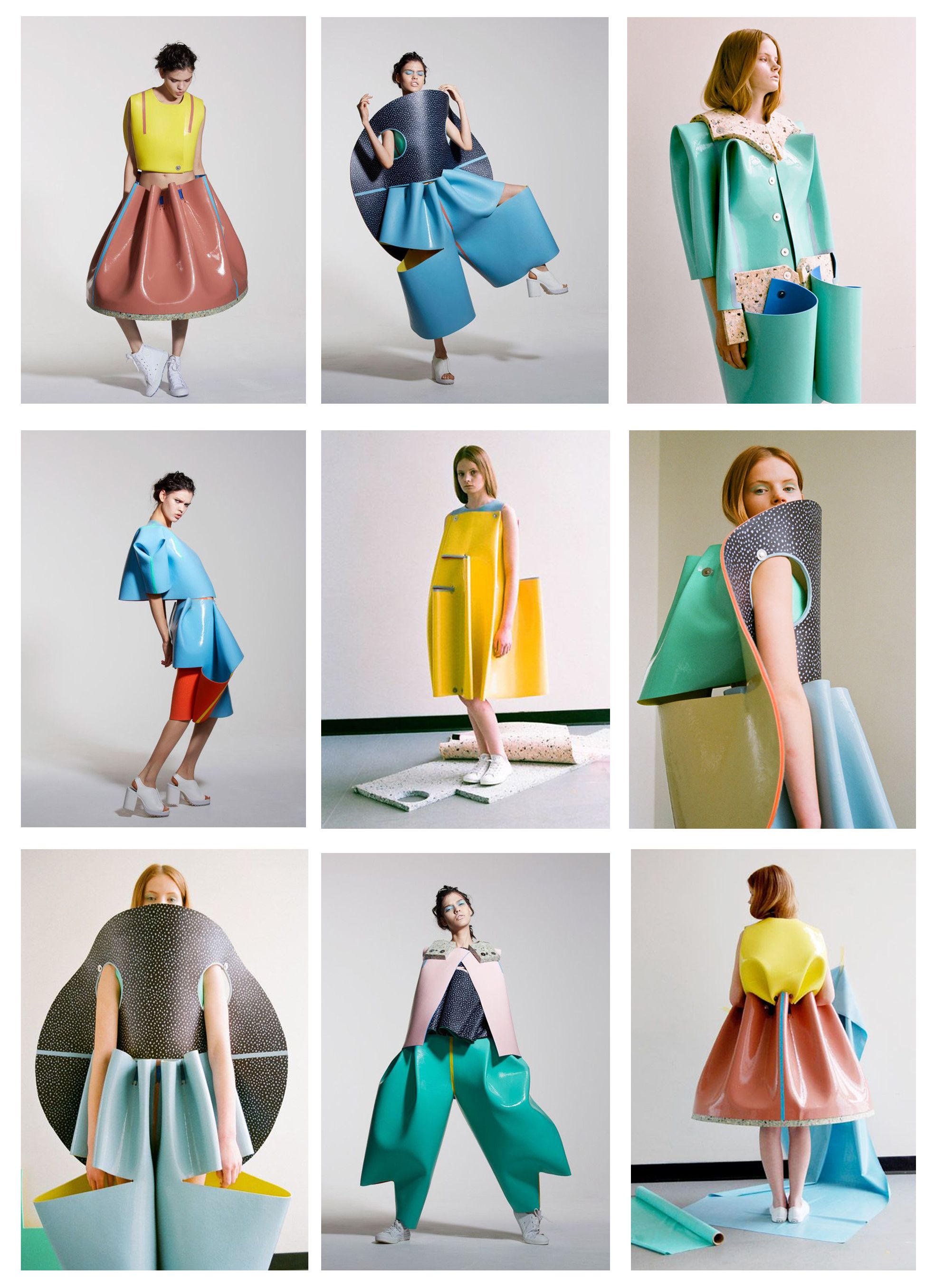 Golden Joinery or kintsugi for clothing, by Painted Series is a really nice example of repair as a design strategy that adds value to used things.

I really enjoy the hectic embellishments by Justyna Wolodkiewicz and the one on the pink skirt by Anya Hindmarch There's loads out there. One reason why I like this is because I imagine picking cleverly from waste materials will allow for a lot of cool designs. They can also be combined with electronics perhaps? I really like the 3D textures you can add with this.

Coral Love Stories by Kasia Molga (and Erik Overmeire) below is such a beautiful combination of fashion and electronics and thermochromic pigments. It's very subtle, unlike some other sources of inspiration but I just think this is beautifully done and tells an important story about shringking coral reefs.

And let's not forget the amazing experiments and documentation done by Plusea on the Kobakant How to Get What You Want page, such as this beardy sway sensor....bows. 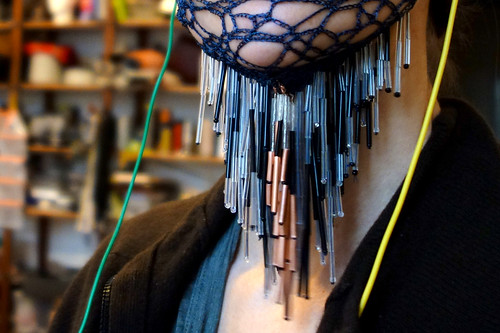 Last but not least, a shop! Mooizooi in Haarlem! This is a social enterprise that collects waste materials from industry, sort it by color, and sell it for almost nothing. I'd love to stop by there and use only this leftover material, for example to make the embellishments like the ones below.

My own students who have inspired me!

The students I get to know during the minor Makers Lab continue to inspire, teach and challenge(!) me loads. Some of their experiments were really great!

Top left is Geert Lens' textile touchscreen entirely made from scratch (2018). He developed a ropemaker to insulate conductive thread, a loom to make the textile, and of course programmed the sensor himself.

Geert also made this glove (bottom left) that vibrates when it senses peaks in electromagnetic fields, such as when a subway train pulls out of a station (together with Anton Westin and Jaap Spruitenburg 2018). The wanted to explore invisible signals in the city and found that some people are extremely sensitive to EMFs, whereas most of us aren't even aware of them.

Melissa de Bie and Elisa van der Burg's and bioplastics experiments to research how they could make the gorgeous tote bag in 2019 (middle).

Geert's coils that pick up some residue energy from RFID scanners, just enough to light up an LED (bottom right).

That's it for now!