I want to design a PCB - flexible or not - that would fit into my garment. It would be a star-like LED array, with the battery and the switch in the middle.

The constraints are related to the standard size of the modules I have defined (even if they are parametric).

Another set of constraints comes from the pdb design itself. The line width of the circuit, the size of the pads related to the components I will put on it, all these factors impact the design of my PCB.

Below you can see the imprint of the 0 ohm resistors I am planning to use as bridges to keep my circuit single-sided. If you want your design to look good it is harder because the logics of electronics deeply obeys to the laws of physics. Keeping my Star-Like design visible after adding the electronic components requires to constantly modify the PCB.

To get a flexible PCB I used a thinner FR4 (.8MM thick) and I have added flextures to it. This one fits perfectly on my garment (pix to add) and shows very bright Blue LEDs.

Adding a completely different type of flexible sensor would be nice. For example, adding stretch/resistive soft sensors to the borders of my garment would be interesting to measure the dimensional variations of an objects that’s wrapped into it. Not enough time to experiment on this right now unfortunately.

2 | Adapting a PCB pattern to my garment |¶

I have been thinking of this for months but couldn’t find the time to seat down and work on it. First, I need to compare sizes between a common Temp Sensor Board and my garment’s pattern. I’ll do it with Fusion 360, as it is a very precise tool if you want to measure things and the space between them. It would also have been possible to redesign the PCB entirely as Fusion and Eagle (PCB Design software) are now connected.

Rescaling isn’t easy when it applies to PCBs. The reason is that electronic components come into packages - meaning: a type of box and pins arranged around the components to make them meet with standard sizes and distances with a very low tolerance. This are both production and then design standards that you can’t ignore when you design or modify a PCB. As you will see below, I’ve used an existing copy of the Temp Sensor Board I want to modify and measured parts of it with calipers to make sure to rescale the PCB drawing as close as possible to reality.

I want to embed a Temp Sensor design (from Neil Gershenfeld) to my garment modular design. I added the connections on the design to assemble it with the rest of the garment directly. I added flextures on the PCB to give it a bit of flexibility, since this FR4 board is made of epoxy (1.6mm) and is very rigid.

I want to demonstrate the versatility of this garment and caracterize it as a surface, and eventually as both a passive and interactive surface that interacts with its environment. 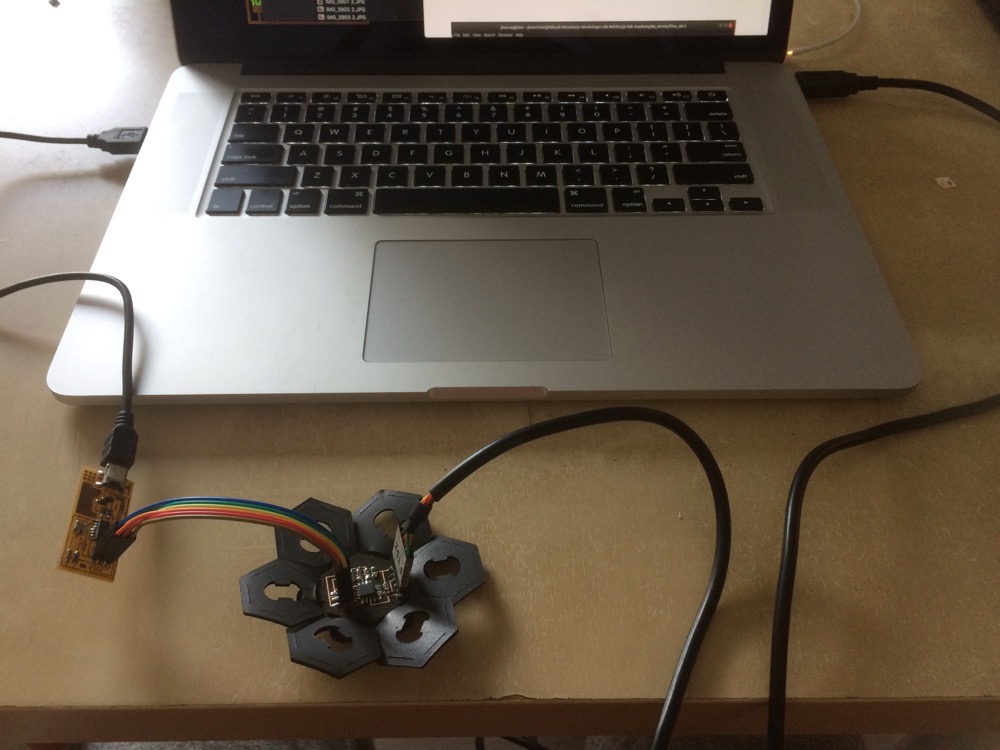 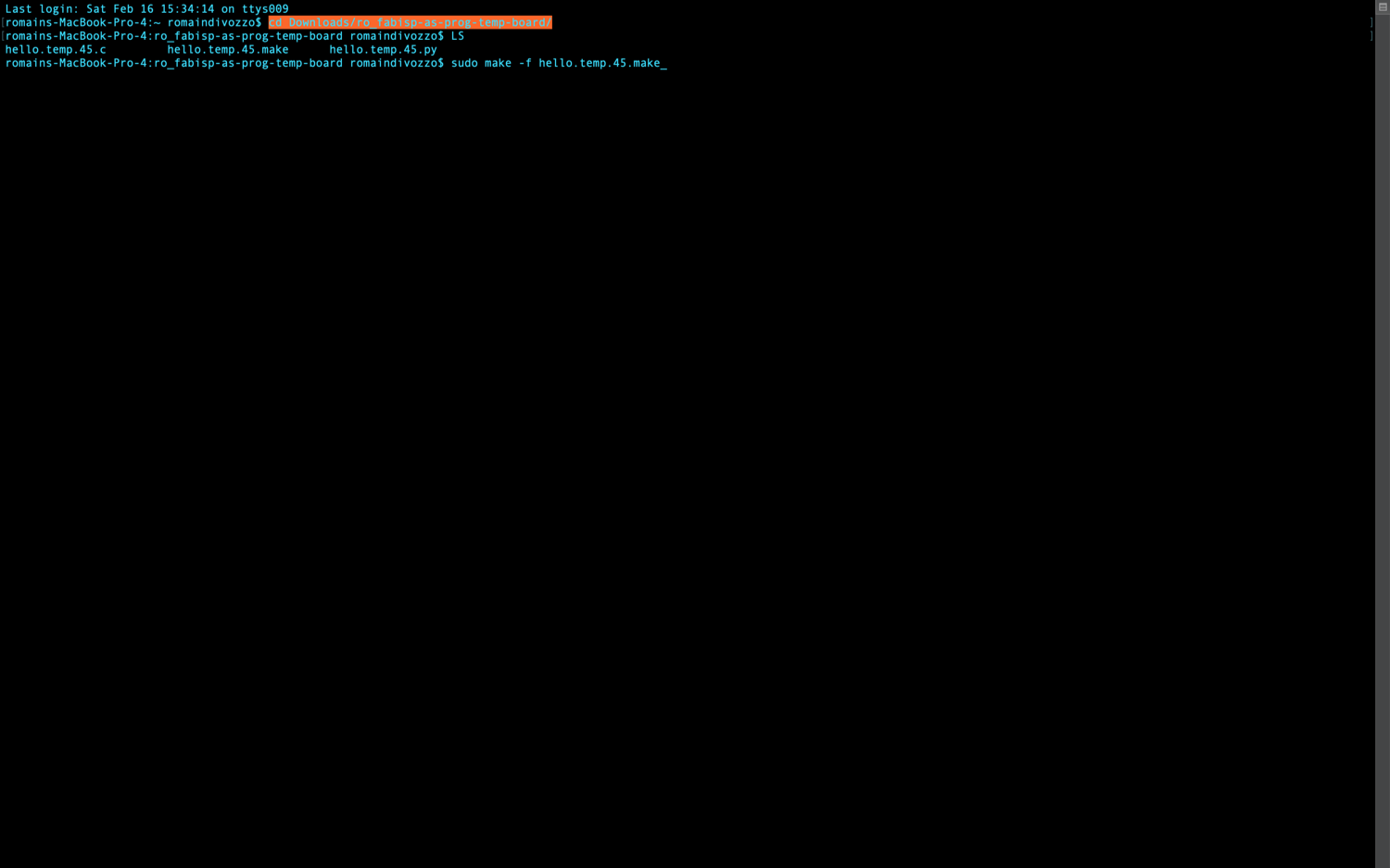 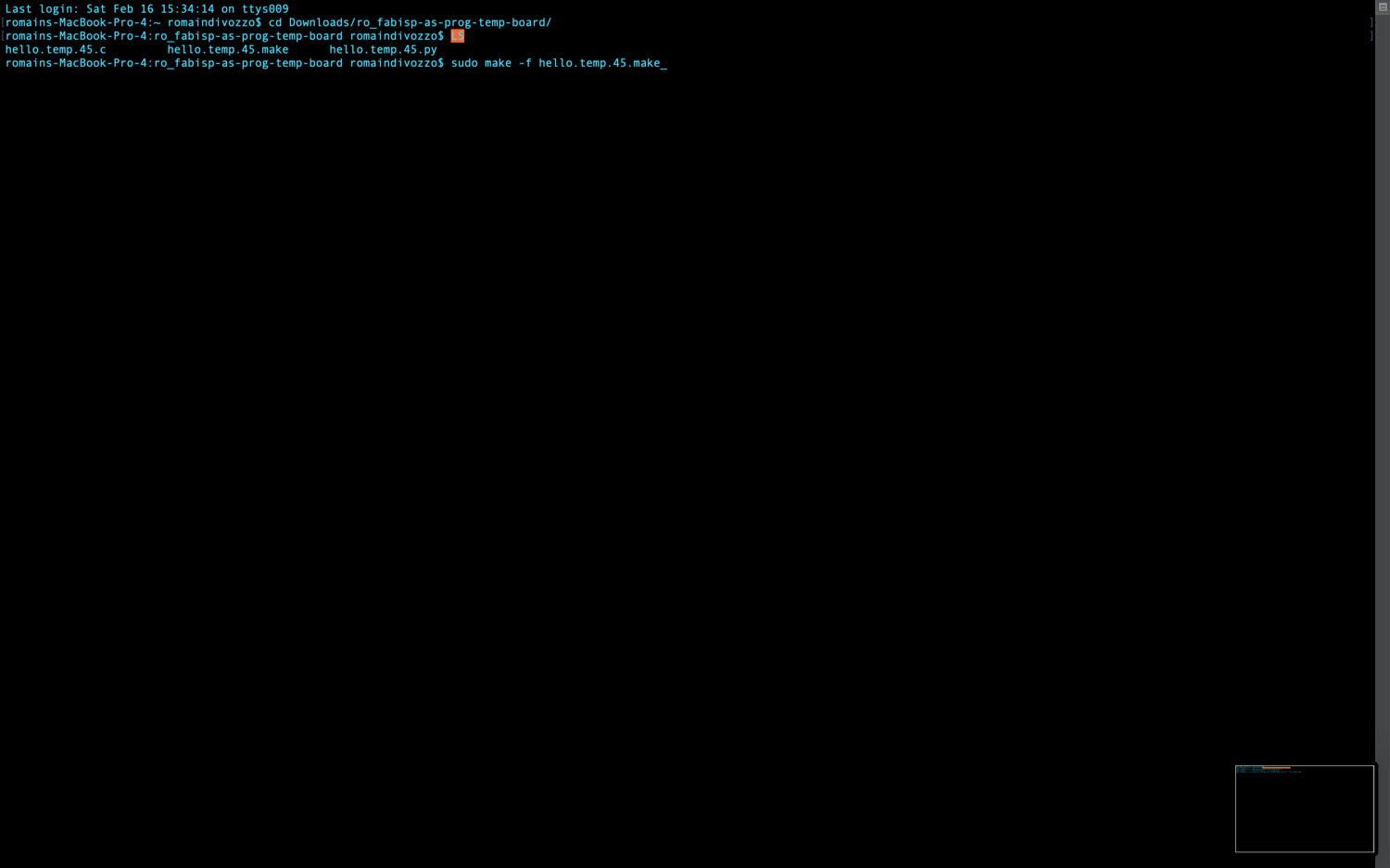 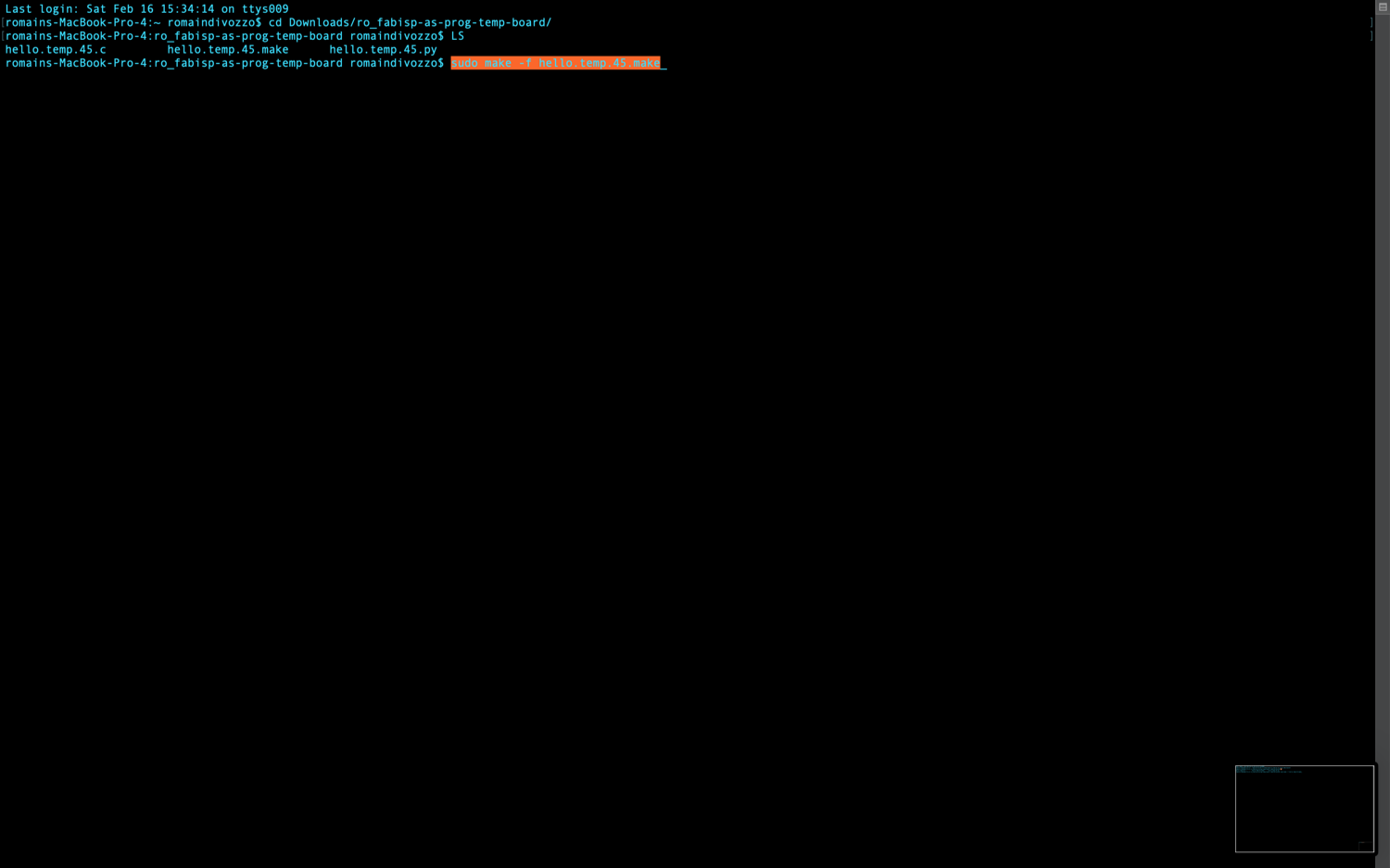 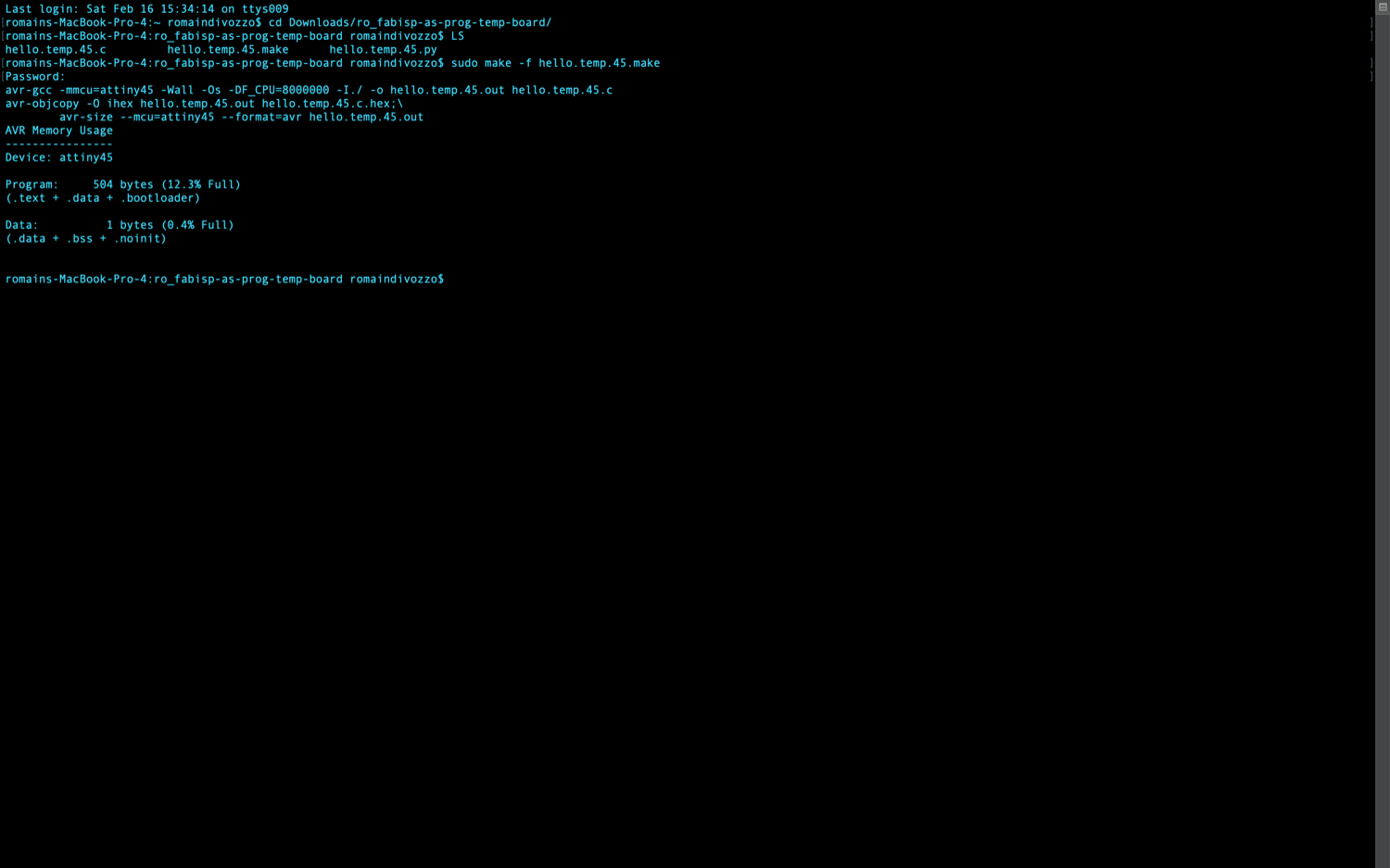 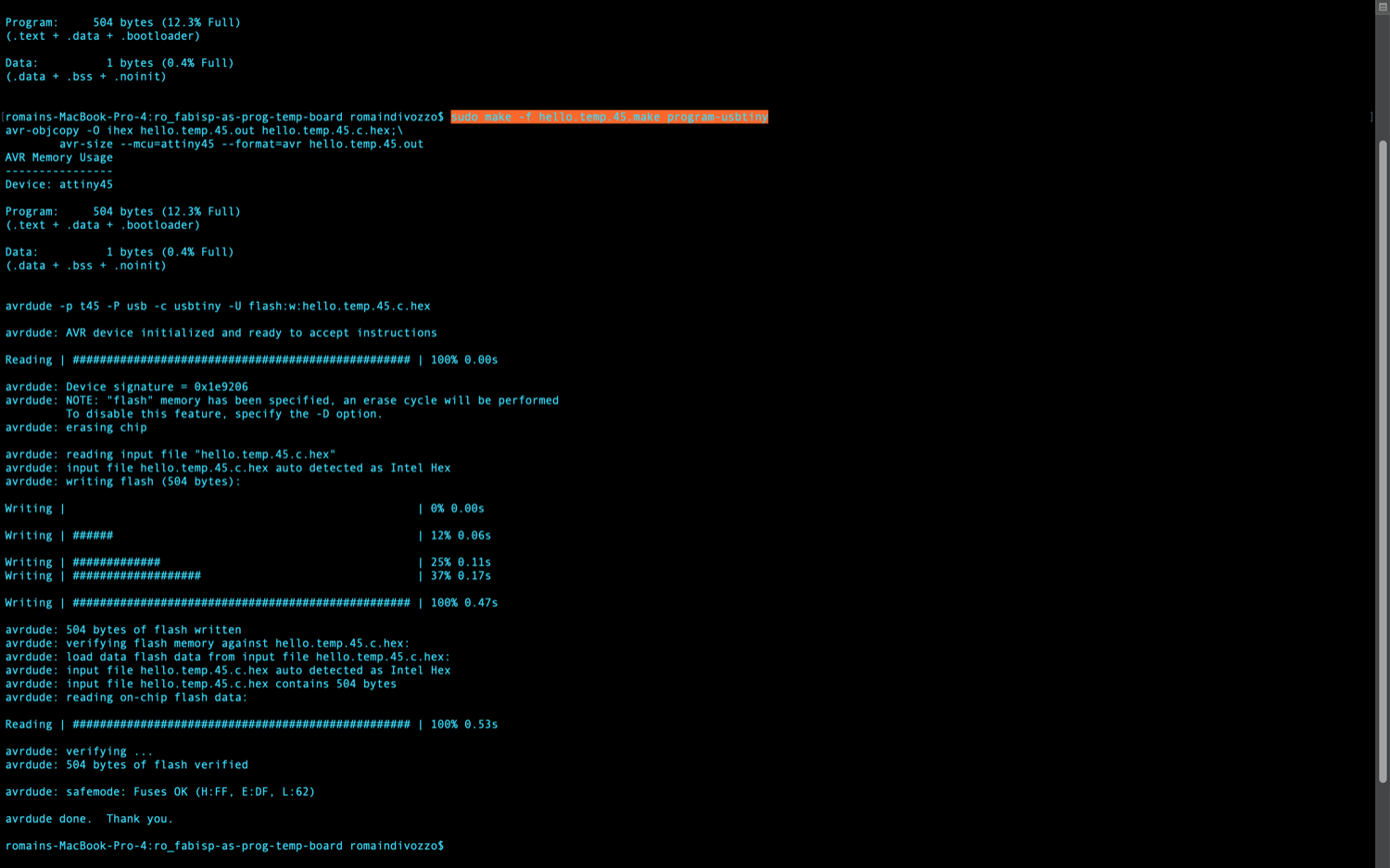 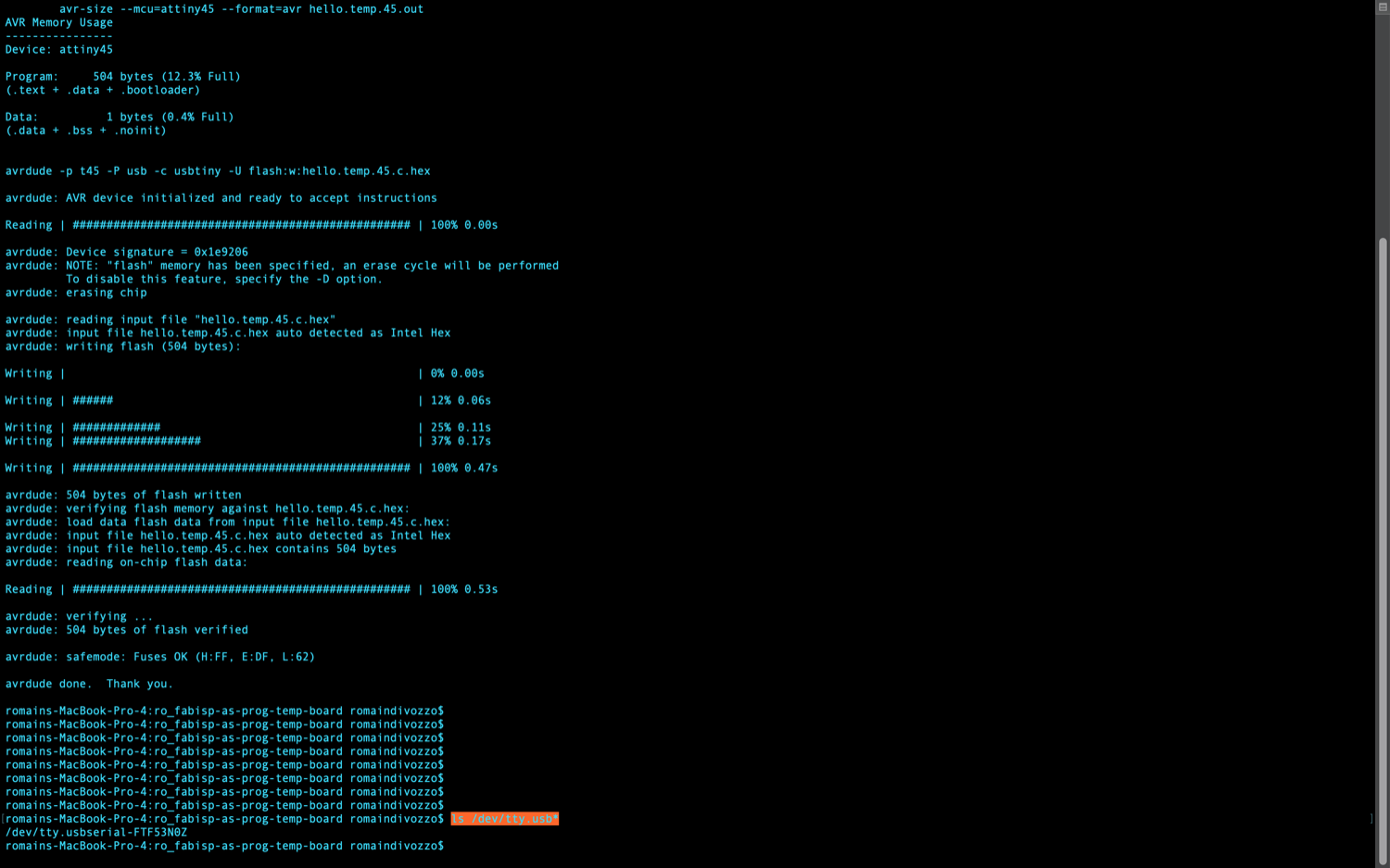 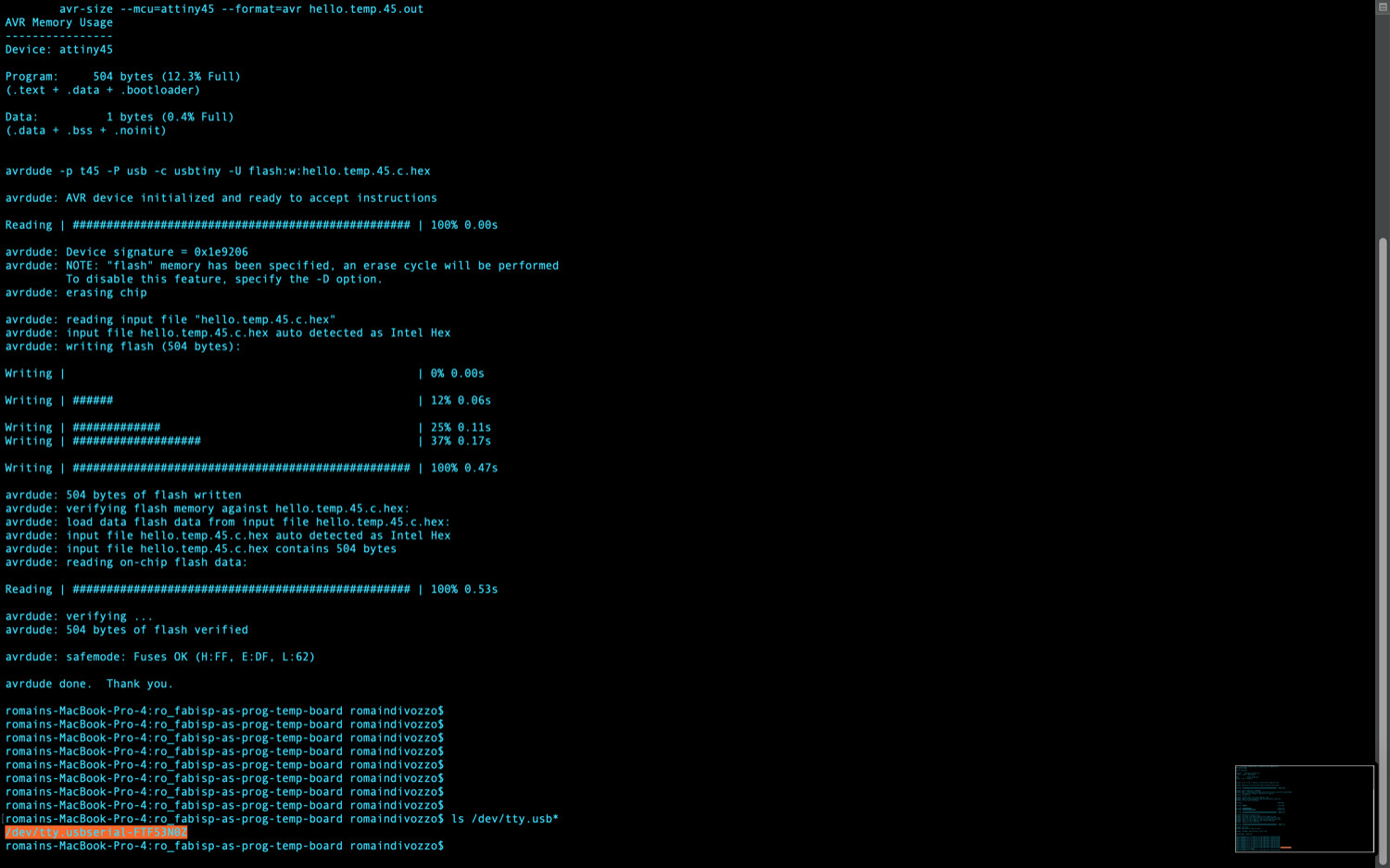 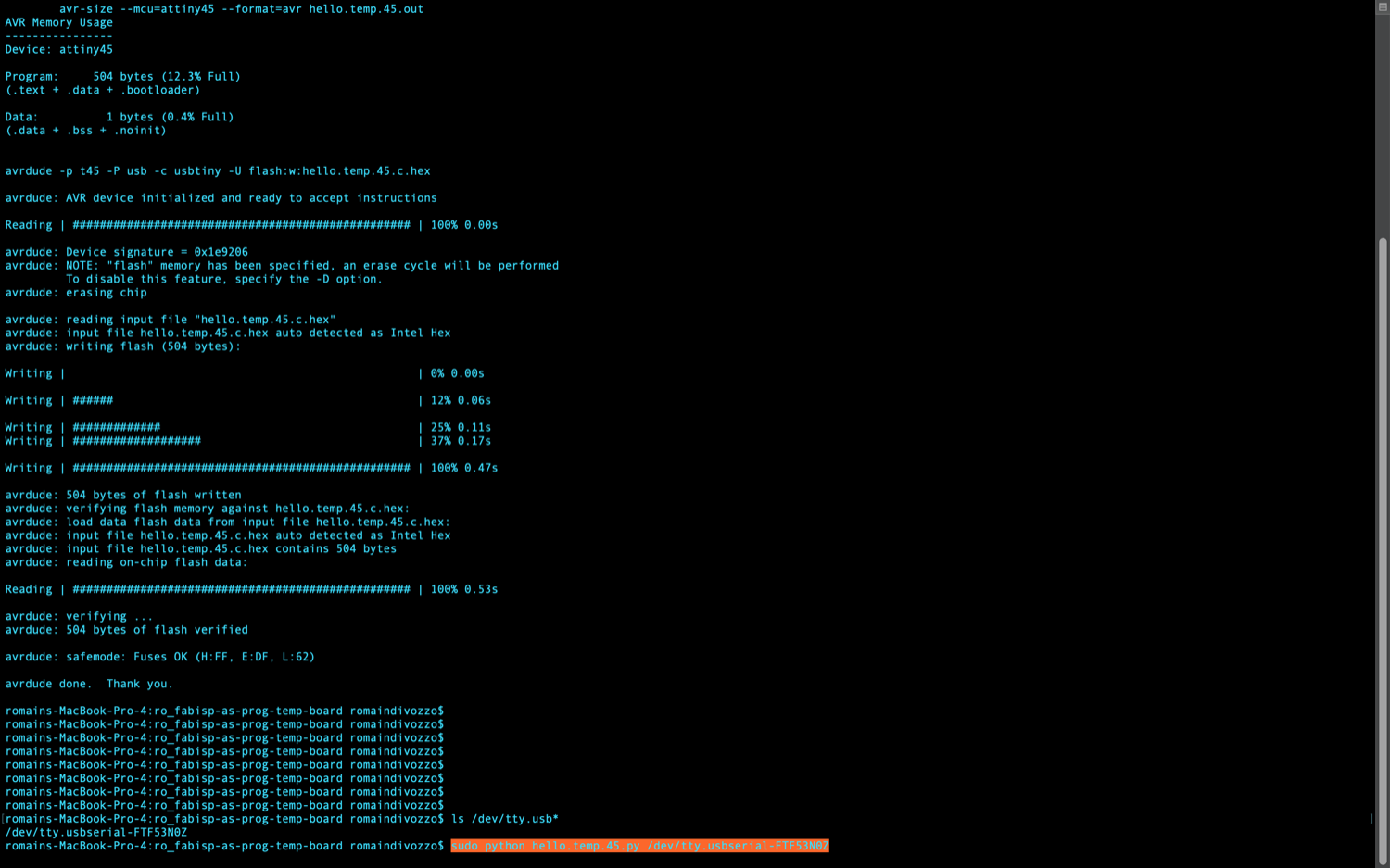 And this window shows the Temperature sensed by my board:

About my final project: I just had a discussion on the strategies to adopt to embed electronics into my garment while keeping it modular without having to embed too many wires to connect, say, light modules that can vary in brightness to a central board.

-The I2C protocol would be perfect for this because it requires only 2 wires to connect 127 slaves (like slave LEDs). I2C protocol can be developed with a Atmega 328P, I could just make my own hexagonal Arduino en use this protocol to communicate with a lot of LEDs. My doubt is that, with my hexagonal modular pattern the distance between the center of each modules is on ly 30mm or so. Atmega328P has 32 pins, which is a lot of pins for 6 LEDs. I was thinking to use a smaller Atmel like a ATtiny 45/85, but I2C is not really made for these even if some people use them through the I2C protocol. The ATtiny 2313 is all about I2C but has no analog converter which means that if I want to add light sensing - and I am thinking of adding light sensing - I won’t be able to do it with the ATtiny 2313. Then comes the price issue: the ATmega328P is so popular that it is pretty cheap compared to other ATMEL microcontrollers.

So I might chose to go with a small hexagonal board that has an ATmega328P on it to control 6 LEDs.

-Another option that goes deeper into modularity are “throwies”. I do like the minimalism of the design but disagree with the “throwability” (if such a word exists..) of this circuits. I still could modify my rubber-light-reflective modules to embed such circuits insice with a rechargeable battery inside.

-As time flyes by, I think I’ll work with what I have in stock, meaning the Atmega328P.

-I am about to order Pyralux to make this PCB a flexible part of my garment. I have a back-up plan to make flexible PCBs with a Copper shield I had bought last yearand Kapton Tape. I asked Camille to make some tests on it and it is very conductive because you can solder on it with common solder, and it is easily laser-cuttable and it is adhesive as well. I am thinking of interweaving that copper-layer with my modular-leather-garments to embed the circuit in it. But Pyralux might really be the right option.