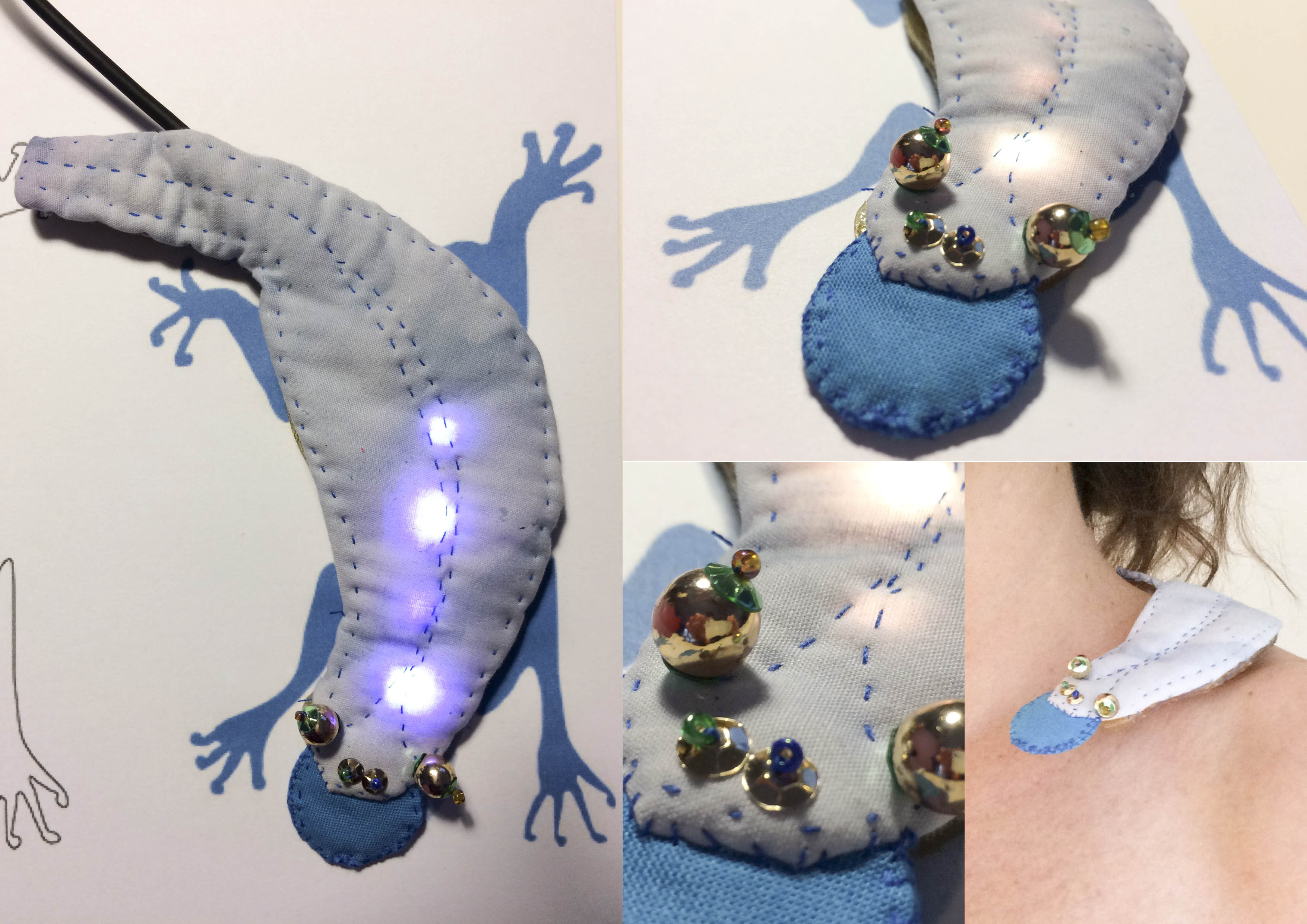 A skin newt with blinking lights changing colors by touching the pressure sensor in the tongue. The bottom of the skin newt is from latex and can be glued to the skin. Paws are painted on the skin with make-up. The newt is made from fabric and fiberfill.

A woman wearing a skin newt on her bare shoulder will certainly meet people that want to touch it. They change the colors by doing so. Deeds are not without consequences. Perhaps the skin newt can be as much as an attractor as a protector. 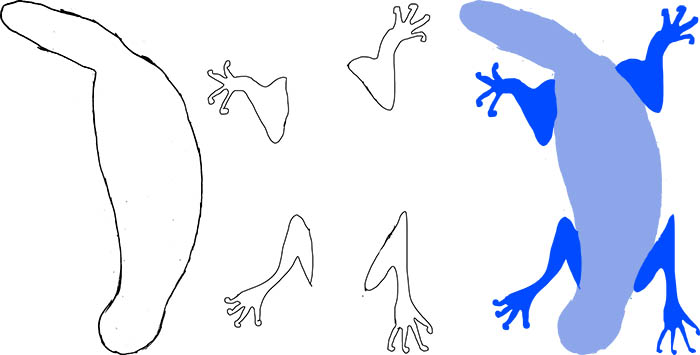 A stand alone ‘skin newt’ on the shoulder as a crossover between a tattoo and a necklace. The body of the newt is from latex and includes the electronics. The paws are painted on the skin. Among many things, the building of WAAG used to be a witch weigh house. Witches were often accused of having a ‘familiar spirit’ in the shape of an animal. The Skyperoom at WAAG is tiled with ‘Delfts Blauw’ that depicts many animals. I found a really strange animal and guessed it must be a newt. So I chose a newt for this project. 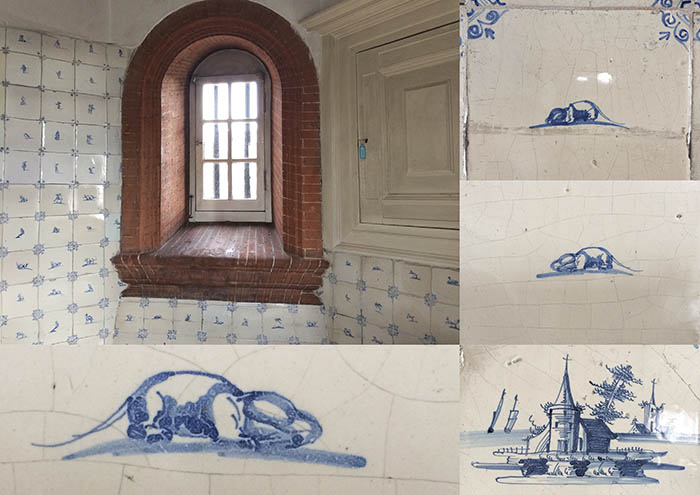 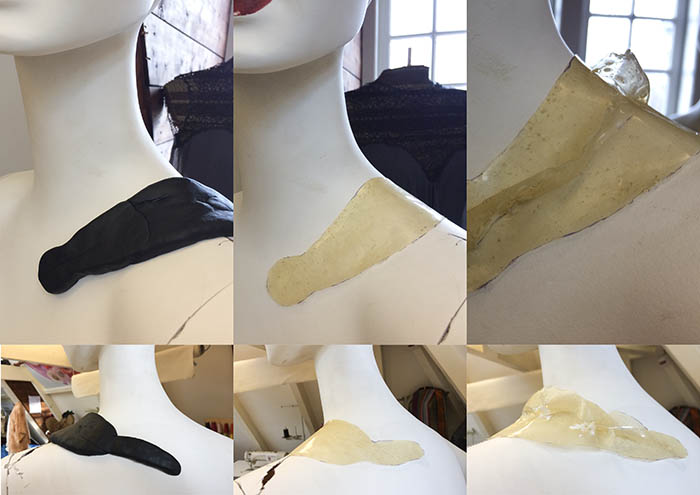 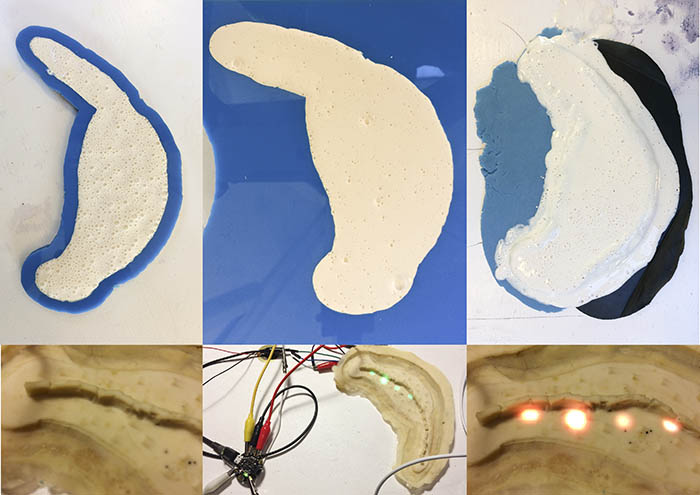 After I made an initial model with children’s clay, I made some models with latex. The first models I cut from a sheet of latex with sciccors. The later models I made with acrylic molds in which I poured the liquid latex. One mold I made of children’s clay in which I pressed a 3D texture and a ‘dorsal fin’ before pouring the latex in. The last mold worked fine but I had to scrub off the clay with soap and hot water. I used the latex prototypes to work with the electronics.

Fabric for the Final Newt# 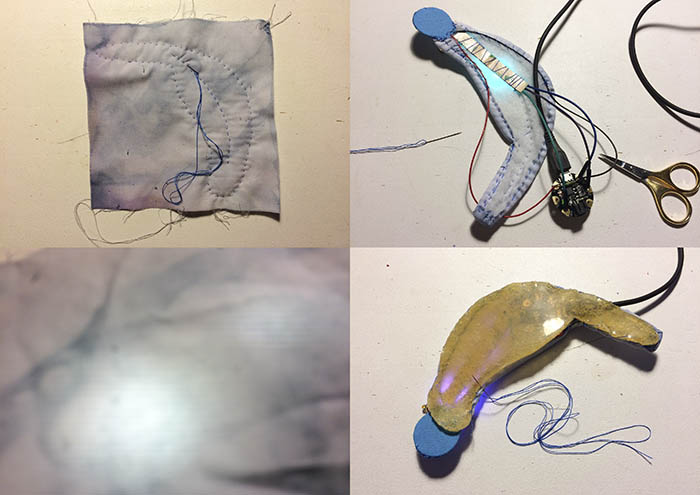 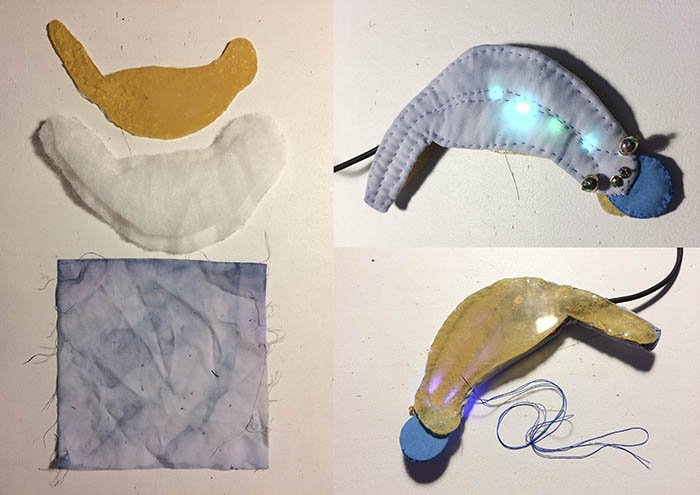 I finally decided only to use the latex on the bottom part of the skin newt. Latex is easy to attach to the skin. For the cover I found fabric to be more elegant and soft for a woman to wear on her bare skin. The latex models had a bit too much of the halloween party look. For the top I used a piece of marbled blue fabric that I had left over from the natural dye classes (dyed in red cabbage without mordent, so in time the skin newt might turn pink in close contact with accidic body fluids). If I would have had more time, I would have liked to adorn the skin newt with more beads and embroidery. And I would have liked to put it on myself with full make-up (meaning: with the paws painted on the skin.)

Figuring Out the Electronics#

So how can you make an interesting skin electronics object that does something more than simply gleam or blink? And how can you make it as small and compact as possible? And also: without having too much connective electronics in the ‘open air’ (for example conductive threads on the outside) because it is worn so close to the skin? The examples you find on internet, say on the Adafruit website, are not so sophisticated. I did a lot of research to finally end up with the concept of the ‘neopixie dustbag’. This seemed a nice project to tweak into a feature skin gem (because it has a sensor input and a surprising output). The circuit was quite easy to make. It only needed an extra resistor of 1 mega-ohm. For the pressure sensor I used a ready-made piezo-sensor, although I would better have used a pressure sensor made from fabric. The piezo turns out to be a bit too stiff; a fabric pressure would have had more souplesse. 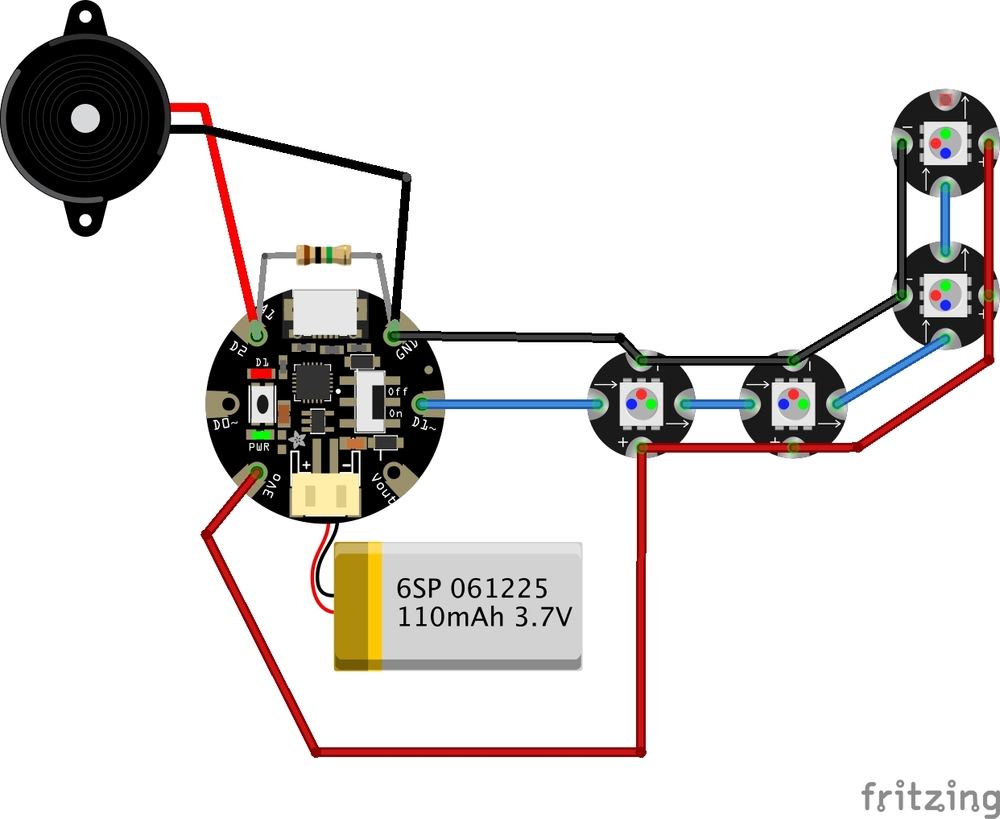 Figuring out the Programming#

The Adafruit Gemma works like a regular Arduino, except that it does not automatically upload sketches. Before uploading a sketch you need to manually press the reset-button on the Gemma. Only when the red light starts blinking you can upload the sketch (and you need to be quick at that). My classmate Jessica Stanley made great documentation on skin electronics. I used her instructions for setting up and using the Gemma.

Gemma Setup as explained by Jessica# 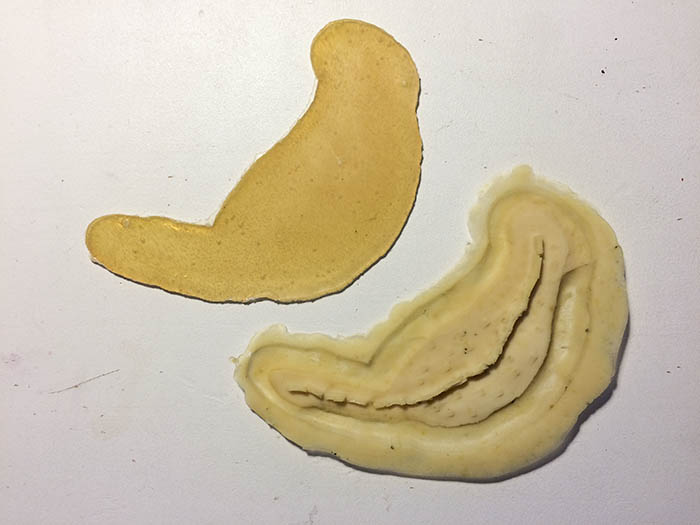 I only used the small part for the bottom of the piece. The top ‘skin’ had a bit too much of the party superstore look, it would not be seen as a serious ‘jewel’.

It took me awhile to put two pieces of ready-made code together (matching the input of the pressure sensor with the output of the neopixels). Initially I wanted to use a touch sensor but I failed to write or compile the right code. I find that it would help to have some better understanding of the Arduino syntax. I do understand the general flow and most of the seperate functions, but it still difficult for me to coherently link these together. I found a website with a ‘from A to B’ course on Arduino programming that I will study during the Christmas break. The code below is what I managed for the skin newt and it works. 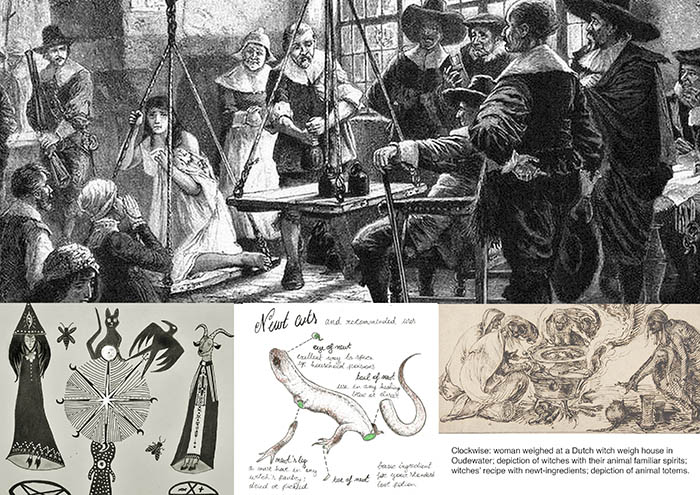 Wise women have been considered witches throughout the ages. Nowadays wise women are not called witches but bitches.

I wanted to re-use the Adafruit Gemma microporcessor so I did not solder or glue the connections. Also I did not attach a battery because I did not have a battery connector to go with the Gemma. It all worked fine. But of course as soon as I had closed the skin newt by sowing the fabric on the latex it short-circuited. Ironically my witches’ skin newt was burnt at the stake. Luckely it did not fry the Gemma, but the neopixels are gone I’m afraid. Also I noticed that when you put the Gemma inside a small object with a pressure sensor attached, the reset-button might start blinking, meaning that the code will be erased and must be uploaded again. This might be very unhandy when you want to use the Gemma in a ‘covered’ environment with no opening for the USB-cable. I guess you might want to put in a rig or casing for the Gemma.

I must admit that I was quite shocked by the skin electronics lecture. We live in an age of ubiquitous spyware, I think. Who needs Google glasses when you can code your hair extentions to send direct messages by satelite? But I suppose this finally reveals the secret of Donald Trump’s crazy coiffure: it must contain sophisticated state-of-the-art visual and audio nanotechnology with a direct communication link to Vladimir Putin. The gif below shows Trump having a phonecall with Putin.

Shakespeare has the Last Word#

Eye of newt, and toe of frog,

Wool of bat, and tongue of dog,

For a charm of powerful trouble,