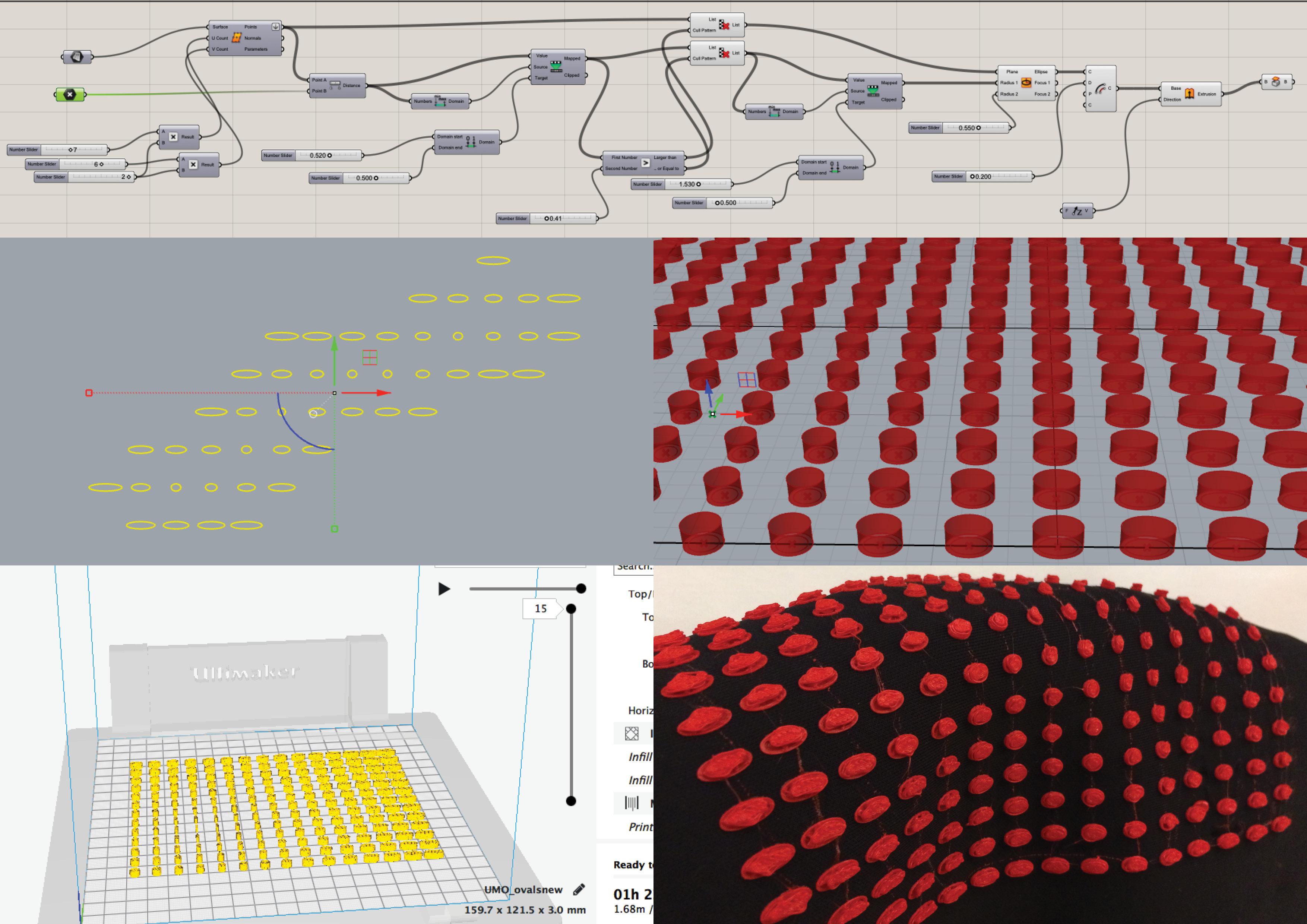 Well, I made something and am really proud of that. Even though experienced 3D modellers will certainly go ‘aaaaah’ when they see my cute ‘is this all you can do’ design, just like when they see a baby panda going off a slide or watch an elderly person street dancing in mpf-times shared YouTube-videos. No matter! Yes this is all I can do. I am happy with the results because there are results! I have made my first Grasshopper sketch, I have learned some Rhino and I have 3D printed a pattern on textile, with a little (much needed) help from Cecilia, for which many thanks. Estimated production time: 42 hours, of which some really small (meaning night-time). In the Netherlands we have a popular schlager-song which is called Bloed Zweet en Tranen (Blood, Sweat and Tears) and I have been humming this to myself all through the week. (When the world famous Dutch soccer player Johan Cruijff died, this schlager was sung in his honor in the Ajax stadium, to give you an idea of its status.)

A Different Kind of Documentation#

So this week my documentation is a little different. I will not explain what I did because I can hardly reproduce it. I will rather reflect a bit on the learning process and what happened here. 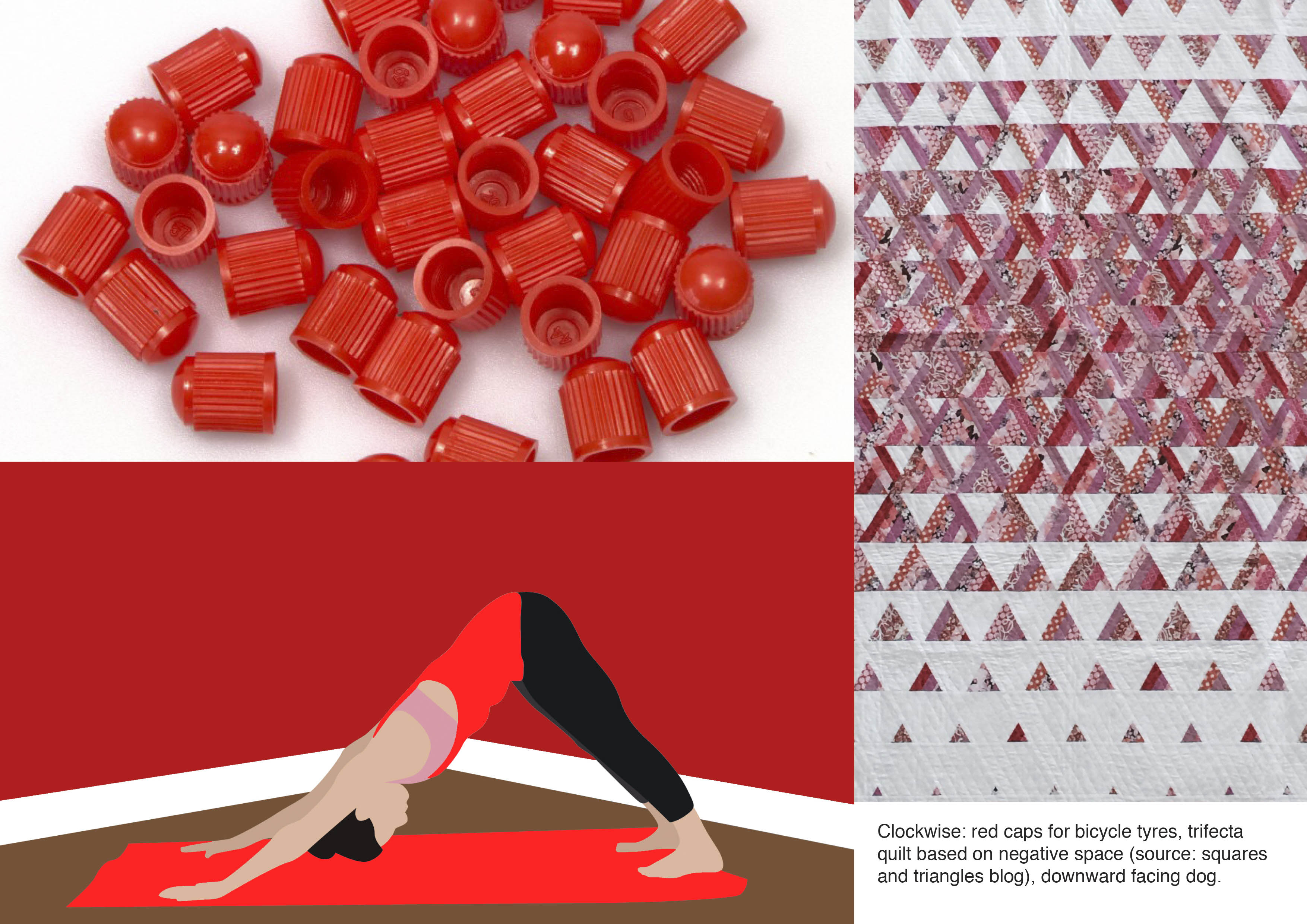 I made a pattern of small little nobs to go under my self-made yogamat (made of textiles) to solve the anti-slip problem. By the way, 3D modelling takes up so much screentime that yoga is actually indispensible for preventing a permanent neck cramp. Fun fact: quilters have long used the ‘attractor’ principle in pattern making for patchwork design.

The bottom of my yogamat could look something like this.

Lost in Translation (Understanding the Software)# 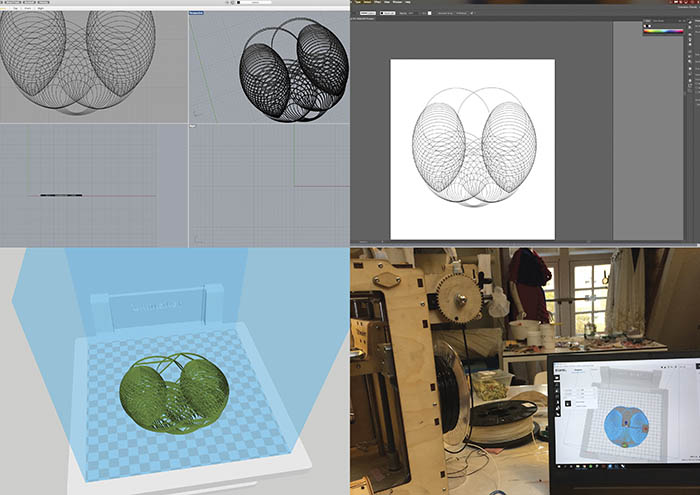 My first Grasshopper design. I call it ‘the cat’ as it looks a bit like a cat’s snout. I managed to 3D print it in one thin layer on a thin silvery fabric. It almost looks like an engraving. See below for results.

When you are an experienced graphic designer and work on a professional level with Illustrator, InDesign and Photoshop, you will find that 3D modelling softwares are a completely different game. Both Rhino and Grasshopper are ‘command-based’ programmes, which means they rather operate from an abstract viewpoint rather than a visual. Actually, softwares like the above-mentioned Adobe-programmes could be considered digitalised sketchbooks or drawing boards, while Rhino and Grasshopper are more like open workspaces with a large selection of tools and many closed cupboards with even more tools. Reminds me of my foster father’s garage, with its crowded walls, floors and shelves of mysterious tools for old-timer car restoration. It needs a totally different mind-set and different way of thinking to start working with 3D modelling software. Believe me, this is frustrating. You really are lost in translation and you need to start from the very beginning. You need to think about construction first and about designing second. Designing on the fly is impossible when you are new to it. To keep comparing it to my foster father’s garage: you need to learn for instance what a gear shift stick is, what it looks like, how it functions, how it is made, what tools you need for making it, how to install it, where to install it and how to make it secure and safe. Yes, if you have NO F IDEA about all of these things, this is a bit of a challenge.

Be very prepared to take a lot of time (and patience) to explore and practice. For me it worked to first read some introductionary manuals (see also below) to actually understand what I am dealing with. I learned, for example, that the steps you take in Grasshopper are ‘executed thinking steps in order’. You sort of compile a flow chart of descriptions and functions in a logical order and then export this as a shape or design. Also you work sort of ‘backwards’: you have an idea in your head and you build it with the tools in Grasshopper in sequential order. Say you want a pattern with circles, so first you start with building the pattern grid, decide what the pattern must look like and what it could do interactively, and then you work your way through until you can hook up the actual circle at the end of the flow chart and maybe attach some components to make the pattern suitable for 3D printing on fabric.

After I had sort of grasped the concept behind Grasshopper and Rhino, I did some very easy tutorials and rebuilt some given step-by-step examples. I played a bit around. This was as much satisfying as infuriating because I had to find out the smallest commands that even the manuals do not explain. An example is setting a slider by just double-clicking on the canvas and entering the numbers in the search bar, e.g. -0.500 backwards arrow 0.500 for a rounded slider, 1 backwards arrow 3 backwards arrow 5 for an integer slider. Jessica told me this: she had read this somewhere. It is so easy to miss the tiny breadcrumbs of essential info when you are trying to understand the workings of a bakery. The previous night I had spent more than a fruitless hour on google to find out how to set a slider with a negative value. This is also something to consider: when you have problems understanding something in Grasshopper and Rhino and want to google, you notice that this is complicated because you don’t precisely know what you want to know. There are many online forums and tutorials but they are of no use if you don’t know the right question. Besides, commands in both Rhino and Grasshopper are like a vocabulary of unfamiliar words. In the end you will just have to get to know them. ‘Woordjes stampen’ we said in college: ‘word pounding’ to learn them by heart.

In the end I did manage to come up with a simple design with ovals changed in appearance by an attractor point. I ‘baked’ it to Rhino and then spent literally hours (I am not kidding) trying to find out how to offset the lines in Rhino – failing each time. In the end Cecilia showed me how to do this in Grasshopper with the ‘offset’ and ‘brep’ components. I would never have solved this myself. I simply (still) lack the knowledge. But I am glad that I did manage some output and did not give up despite bloed zweet en tranen. What worries me now is how to continue. I think it will need a lot of regular practice before I can use Rhino and Grasshopper to do what I want (instead of me labouring to find out what the software wants) but where do I find the time? Also I fear that the knowledge and understanding I now have of Rhino and Grasshopper is so flimsy and elementary, that I will forget and will have to start all over when I have more time say in January. Maybe I should tell myself to schedule one ‘R-G-hour’ a week to do some ‘maintenance training’. Because I do feel this software is important and opens doors to a whole brave new world of (interactive) designing. 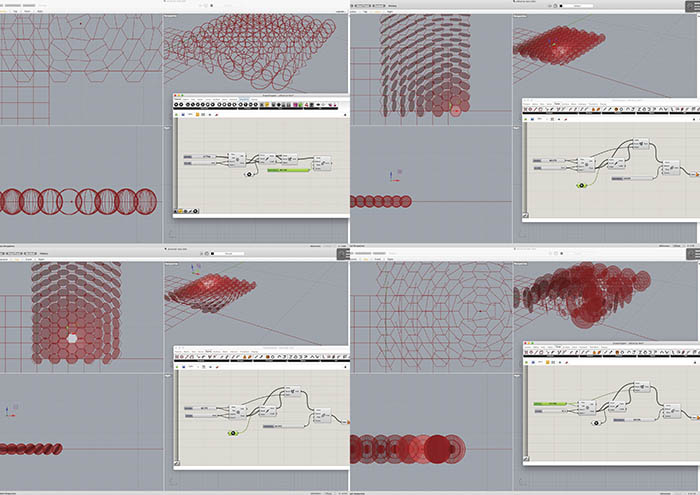 Cura, the software for the Ultimaker original 3D printer that the TextileLab uses for 3D printing on fabrics, has a supereasy user interface. Just open the .stl file, fill in the settings (basics: nosel temp 220ºC, speed 60, no brim - but the programme also prompts settings), choose the right printer and material from the drop-down menu and you are all set. All set? Turns out the hardware can be a bit unreliable. And what is the biggest problem for each beginner? Troubleshooting. Because you don’t know what side to slap or not slap to get a machine working. We experienced some problems with the filament feed. The filament itself seemed to slip in the spool and also it did not come out of the nosel. We tried unclogging the nosel but then we didn’t know how to pre-heat the nosel without starting a print (the little display on the Ultimaker would only tell us the temperature of the nosel, not give the command for pre-heating it). We tried opening and closing the spool many times. In the end it turned out (we were helped by experts) that the filament was stuck both at the nosel’s head and in the spool. After we adjusted all this with two wool needles serving as tweezers, and we had also removed some obstructing yarns of wool from the spools turning wheel, the machine did work. Although it does make a threatening sound when starting up (but it seems this has to do with the software upgrade not being compatible with the machine anymore, or so the experts suspect). 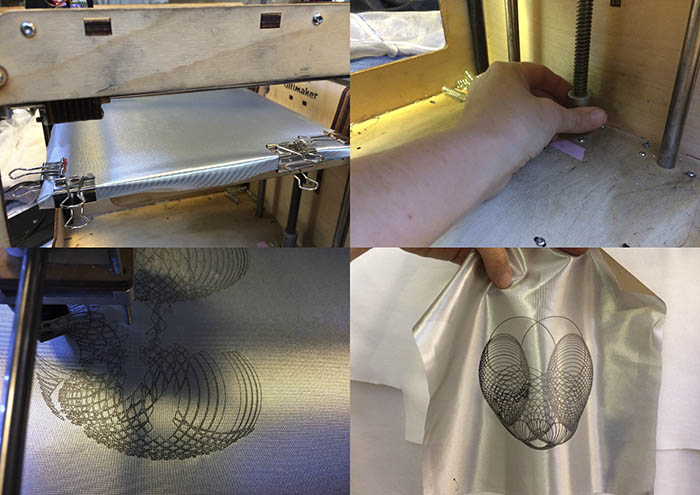 The platform must be manually moved upwards a bit during printing so that the first layer of filament merges better with the fabric.

I want to express a ‘big thank you!’ to Raymundo Burgueno from the United States, who hosts a very nice text-based, easy-to-understand, step-by-step Grasshopper manual for starters. Thanks Ray, for your comforting words in the instructions. It really helped me to not get disheartened! Ray’s truly accessible intro to Grasshopper can be found on his website Handlebar3D.com. Click on the ‘learn more’ buttons to actually learn more. I also want to express deep gratitude to the editors of the ModeLab Grasshopper Primer Project, an online text-based manual for beginners which enables rookies to actually start building Grasshopper definitions from scratch and understand what they are doing. I downloaded the primer as pdf and used it to work split screen on my first Grasshopper drafts. For further reference there is this online list of Grasshopper components. A short intro into making 2D patterns with Grasshopper was made by Mark Meier, also from the United States. Many thanks, also, to the Fabricademy tutors Aldo Sollazzo and Eugenio Bettucchi who explained Grasshopper and gave valuable info on how to do cool things for textiles. Although I couldn’t follow you during the lectures, I will get back to the recordings when I am more confident with the softwares.

A good text-based reference for Rhino was written by Robert McNeel & Associates and can be freely downloaded as pdf. Of course Rhino 3D offers a large online collection of tutorials. And Fabricademy too has some fine references to the Rhino and Grasshopper softwares. I would like to study a level 1 Rhino-training by Mary Fulger but it is behind a paywall.

The Problem with Video Tutorials#

They are only useful if you already have some basic understanding of the operating system and shortcuts of the software. For instance mouse- and keyboard-actions stay invisible in screen-grabbed video’s, which makes it difficult for me to reproduce the steps that are shown to me because I don’t know how to drag, pick or click. So I find that most video tutorials go too fast for me and also that they take too much time because they are linear. I read faster and find it easier to browse and navigate text rather than video.

To Keep Up the Good Work#

…It’s probably a good idea to join a 3D Modelling Meet-Up group or actually take a ‘live’ course for several months, just like you would to learn Russian or Chinese. Please keep in mind that if you google ‘Grasshopper Meet-Up Amsterdam’ the search results will lead you to marihuana cafes rather than to geek workshops. Self-study is of course a possibility but will probably need a fair amount of determination. It might be hard to sacrifice a lot of spare time to learn something quite complicated with quite a slow pay-off. 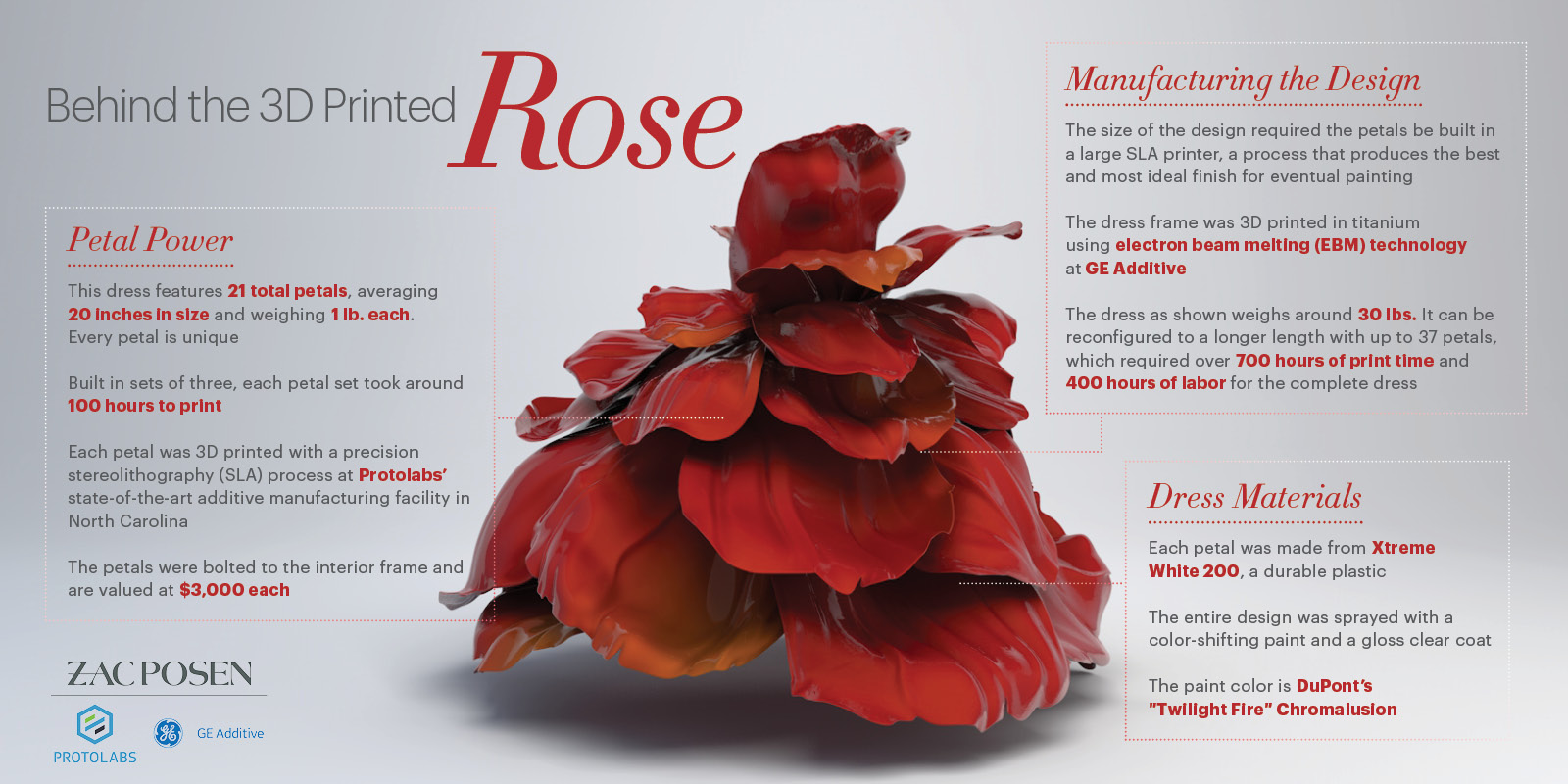 The latest in 3D fashion design: the rose petal dress by Zac Posen, worn at the Met Gala 2019.