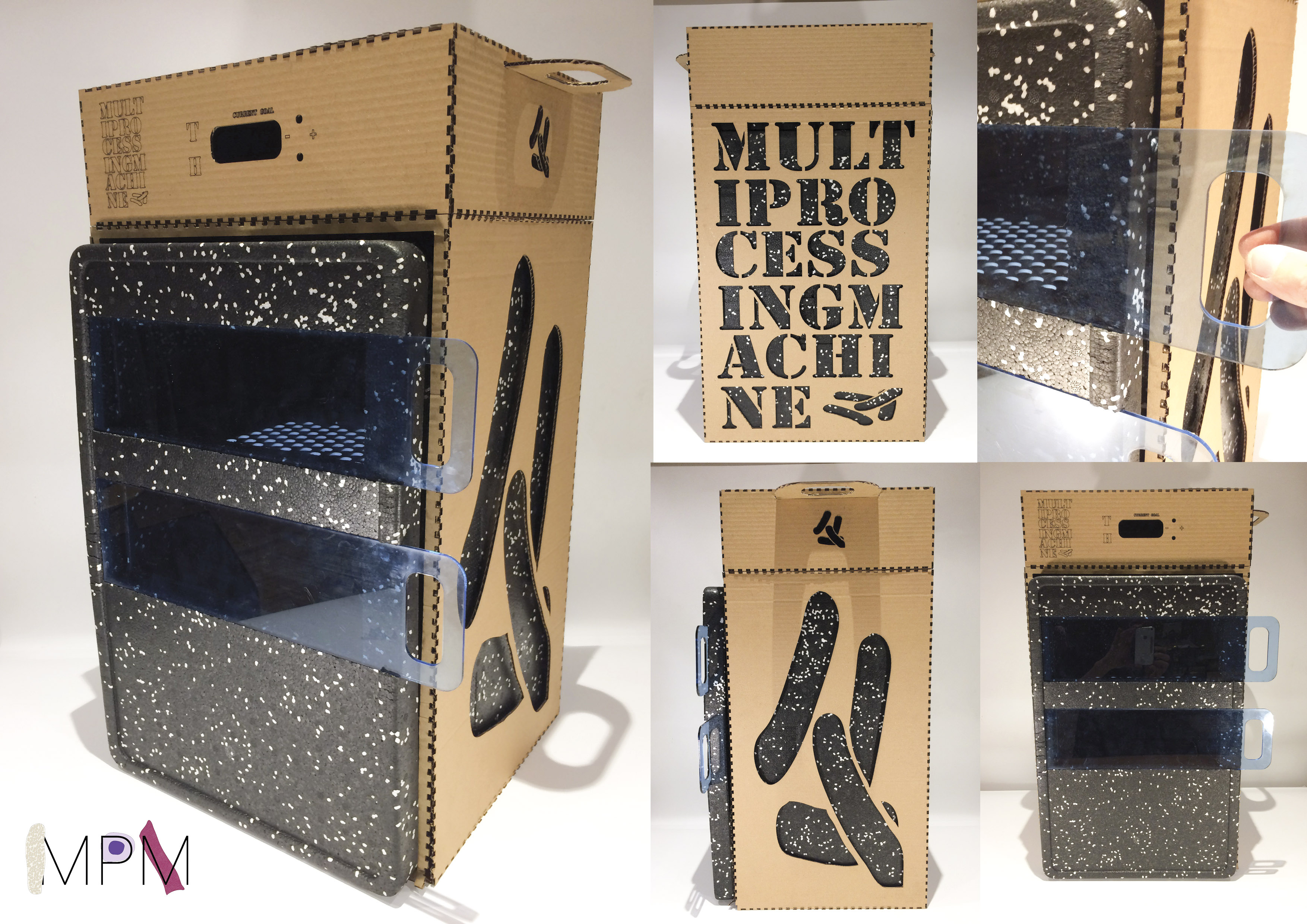 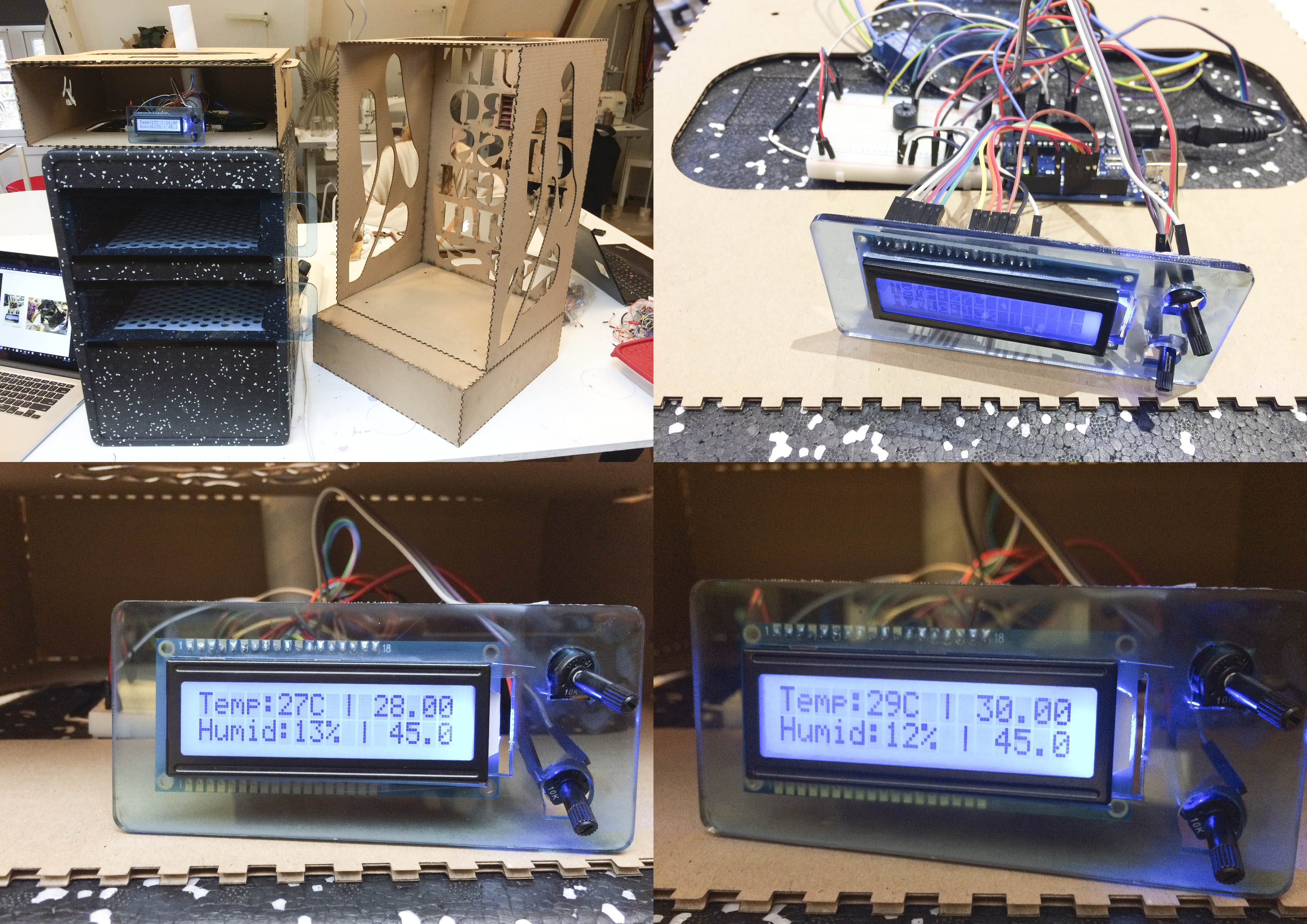 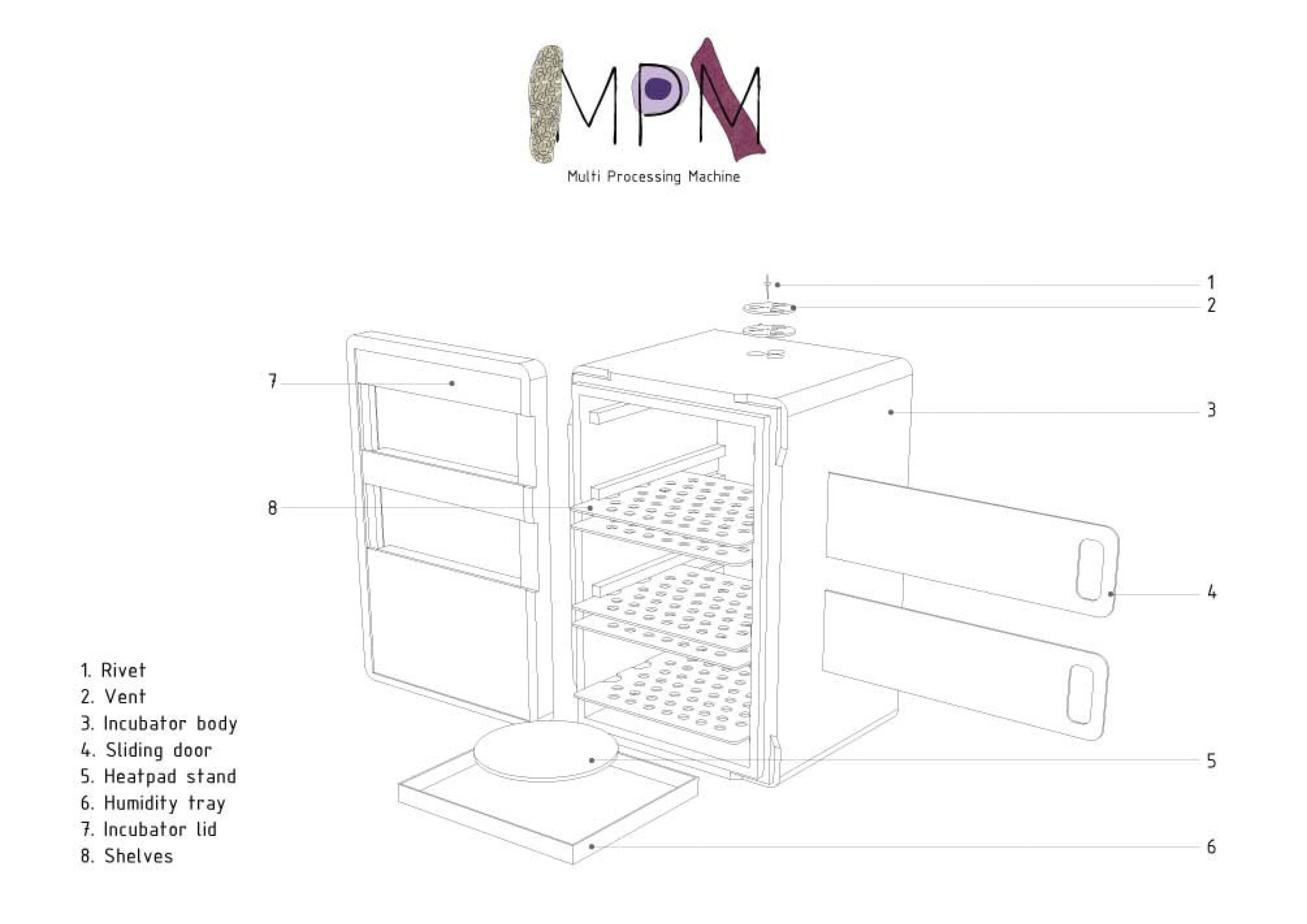 Group documentation may be found on a seperate webpage describing the Multi Processing Machine.

Some Words on the Project#

My own personal interest was to make a machine for cutting/spinning yarns out of unrecycable food packages (for instance metal-coated plastic bags for comfort snacks) but as a group we decided differently. We were going to make a multipurpose incubator for growing bioleathers and for drying fishleathers and bioplastics, among other things. I was happy with our choice because I am very much interested in low-energy, sustainable cooking devices or fermenting machines for the kitchen. In recent years I have made some incubators myself (not working properly, by the way, so now I use an insulated coolbox to make my weekly stock of yoghurt). I was curious about a machine that would regulate temperature and humidity. When Wendy, the same day of the first brainstorm and during her smokebreak, by coincidence saw an icebox in the back of a delivery van and kindly had it donated to her by the driver, it was settled: appearantly God - Fate - Gaia - the Universe wanted us to make this multifunctional incubator. And so we did. I am very proud of the result. Wendy and Jessica truly worked their a*s off to find software and techological solutions, all the while making new parts to go in the circuit of the machine; Irene and Stephanie did all the technical drawings, documentations and logo designs; Scarlett broke her head over ‘wicked problems’ of the machine (how to keep the sliding doors safely secured); and I made the exterior design of the machine. Our group was a ‘well oiled machine’ and I think we made something we are all happy with to use in our future practice (or even at home for making tempeh, yoghurt, kimchi and cheese). 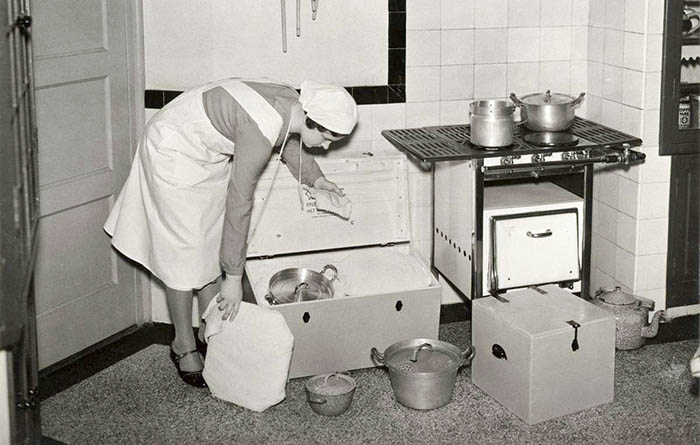 A ‘hooikist’ or hay box is a wooden box originally filled with hay, in which there is room for one or more pans. The box is used to cook food without requiring continuous heating. Food (potatoes or vegetables) is put in a pan with water on the stove and brought to the boil. Then the pan with contents is placed in the well-closed hay box. Due to the insulating effect of the hay, the temperature in the pan remains high, and the food is cooked. Because there is some heat loss, the cooking time is longer than with permanent heating. Dishes with a long cooking time at low temperatures such as stew pots, rice and pasta are ideal for preparing with a hay box. The Dutch have a long tradition of using hay boxes, that were also used to ferment traditional Dutch foods as ‘zuurkool’ (sour cabbage). I love hay boxes because they are a cheap and energy-saving kitchen device for making meals (mainly soups and curries). TOO COOL FUN FACT: in old Amsterdam trams there were even small hay boxes installed, hidden under the seats to keep foods warm on the way home. 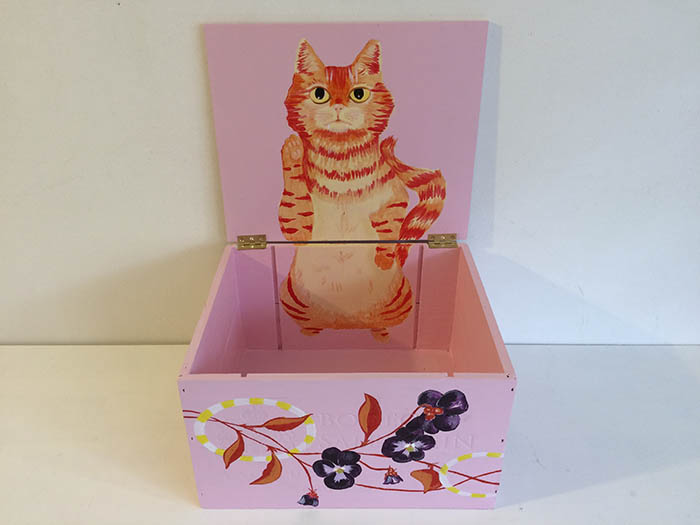 In recent years I made some hay boxes myself. More examples can be found at KATBAK.NL. They did not work well because the wood does not retain heat and they are too small to put in extra blankets. 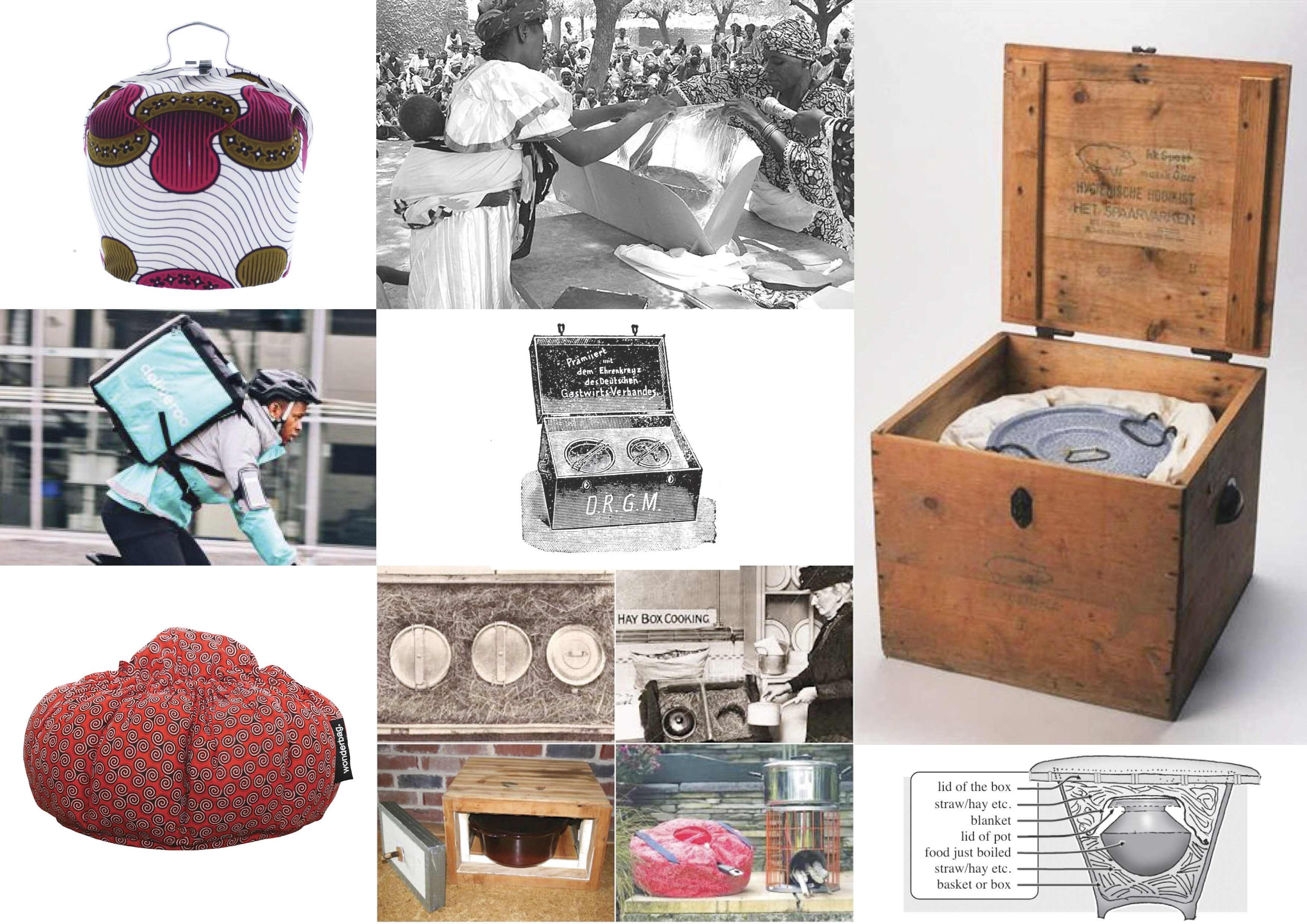 Nowadays we see many hay boxes in the public sphere thanks to Deliveroo. Because hayboxes are efficient in energy usage, the Vajra Foundation has introduced solar cookers and hay boxes in Nepalese refugee camps on a large scale to limit the use of illegally logged timber. In Guatamala cheap easy-to-assemble hay boxes (Cocedora Onil) are spread to poor communities. Onil Helps also has DIY stove kits. Originating in South Africa, wonder boxes and the similar commercially available wonderbag, are essentially a bean bag for your pan. Instructions for those interested. And more info on Wonder Bags (not diy).

Some Words on the Process#

In my rather ample experience (and quite modest opinion) there are three very important conditions for working well as a group, especially interdiciplinairy groups. These conditions are trust, commitment and generousity. I have been a participant in several interdisciplinairy teams and always when those conditions were met, the results were awesome. But if one or all of the conditions were lacking… Well, the teamwork became a tour the force and (sadly) competition soon settled in with individual members, frustrating or even depleting the total group effort. Fabricademy Team Amsterdam did extremely well, I think. We trusted each other to devide and give each other seperate tasks, we were very committed and we were generous, supporting and complimenting each other and also helping each other when there were difficulties. I guess our group was also gently patient. For example, sometimes it took some extra explanation from the part of the ‘technicians’ to make me, the ‘designer’, understand what the hell they were doing and what I had in front of me. (I guess I got the essence but not the complete picture, but this was sufficient for me to go about the exterior designing.) I must add that when the three conditions of trust, commitment and generousity are met, it is essential to put a few ‘f’s and one ‘p’ in the mix. Fun, Food and Failure-relief (nobody fails as a person, we only fail as a group; failure is not a defeat but an opportunity to discover and learn). Play.

An expert on collaboration and crafts is the American sociologist Richard Sennett. In his books Together: The Rituals, Pleasures, and Politics of Cooperation and The Craftsman he studies the workings of collaborative making. I think these books are mandatory reading for contemporary makers. In Together Sennett contends that cooperation is a craft, and the foundations for skillful cooperation lie in learning to listen well and discuss rather than debate. He explores how people can cooperate online, on street corners, in schools, at work, and in local politics. He traces the evolution of cooperative rituals from medieval times to today, and in situations as diverse as slave communities, socialist groups in Paris, and workers on Wall Street. Divided into three parts, the book addresses the nature of cooperation, why it has become weak, and how it could be strengthened. The author warns that we must learn the craft of cooperation if we are to make our complex society prosper, yet he reassures us that we can do this, for the capacity for cooperation is embedded in human nature. The Craftsman leads Richard Sennett across time and space, from ancient Roman brickmakers to Renaissance goldsmiths to the printing presses of Enlightenment Paris and the factories of industrial London. History has drawn fault lines dividing practice and theory, technique and expression, craftsman and artist, maker and user; modern society suffers from the historical inheritance. But the past life of craft and craftsmen also suggests ways of using tools, organizing work, and thinking about materials that remain alternative, viable proposals about how to conduct life with skill. (I copied these desciptions from Sennetts website, in case you were wondering how my English became so native all of a sudden.) 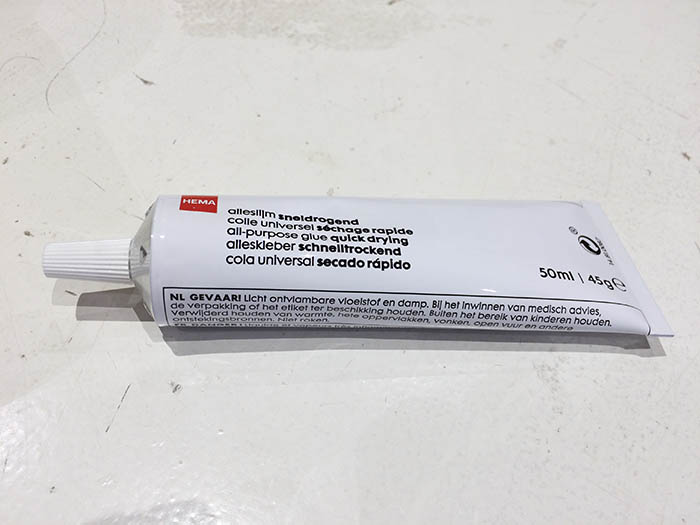 My special task in this group assignment was to design a casing for the incubator. For this I designed something to make the ice box look like a sophisticated product with an outside that is a bit slick and sexy, something you would like to have in your kitchen as a ‘feature’. The design is cut out from the material rather than printed in ink on the surface. That’s because I wanted to see the inside. For I loved the look of the ice box, with its white dots on a black back ground. The dots reminded me of bacteria-cultures in a petri dish. The result is that part of the icebox is visible from the outside, giving an effect of looking at bacteria-cultures under a microscope. Since we were still prototyping I lasercut the casing from 3mm cardboard (and not, for example, plywood), just to be able to make easy adjustments. 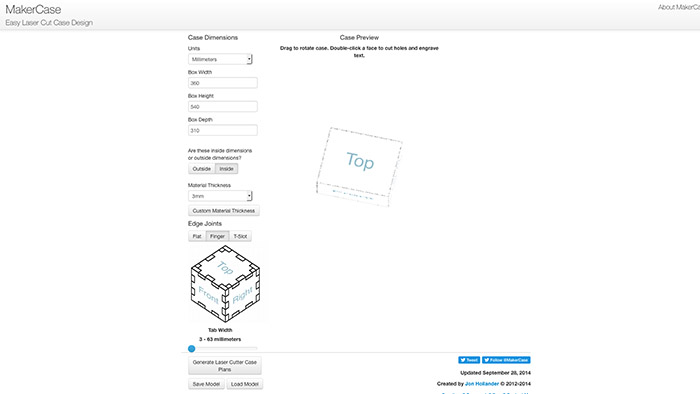 No need to painfully design your basic box for the lasercutter. You can download your ready made lasercut plan from Makercase.com. Just put in the right sizes, download the files and you are all set. I chose the option ‘finger joints’ in the standard 1 cm size with a 0.2 mm offset. As we were working on a deadline and the ‘developers’ were still figuring out the electronics, I thought it best to make a modular casing. Therefore I downloaded three boxes to stack on top of each other: one small one for the top, one big one for the middle and one small for the bottom. In this way we would have extra space everywhere (literally) for electronics, if needed. I interlinked them with holes. As a ‘lid’ I put in a slide on the top. This makes it possible to reach the electronics easily and is also an extra opening for the vent.

I imported the cutting plans from Makercase in Illustrator to merge them with my visual design. The rather simple idea (hey, I am Dutch, we like simple things) was based on standard bacteria shapes. One of the things I seem to forget everytime is that it is very important to make sure that the lasercutter can read the ‘paths’ of the vectors. Sometimes I (partly) design in Photoshop and ‘exporting paths to Illustrator’ simply does not do the trick. So remember: in Photoshop select the forms, make a new layer, outline the forms with a 0,25 mm stroke, delete all layers but the last one, again select the shapes, go to ‘paths’, in this window go down at the bottom and select the middle button (round with points on the side, it says ‘make workpath from selection’) select both the workpath and the forms on the canvas and now export ‘paths to Illustrator’. I took care to have the outside cut out last, so I made a color scheme: first red for engraving, then green for cutting the design, and finally black for cutting the box from Makercase. The settings for a perfect lasercut for 3mm cardboard is speed 80, power 100. 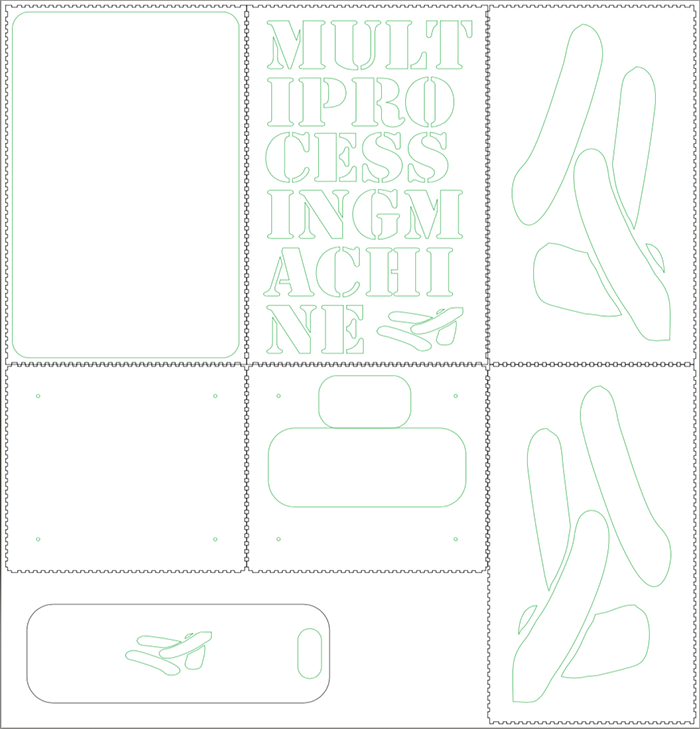 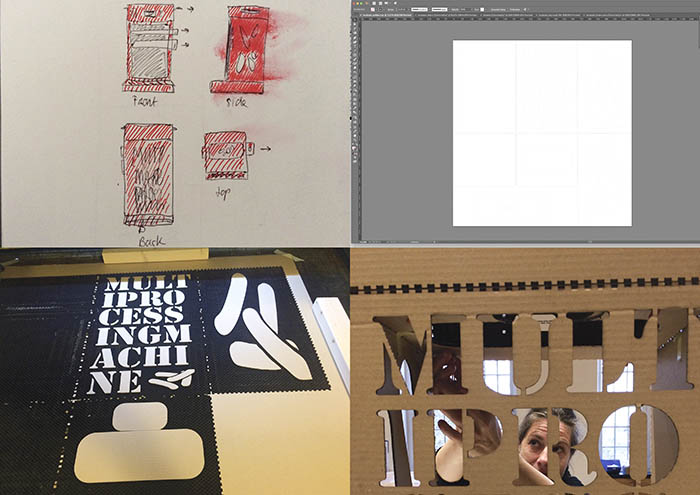 While the other team members were concentrating on actually building a well-described and technically well-functioning machine, I was concerned with what I initially thought of as ‘useless embellishing’. Why make a casing that seems to have no other function than to make the product look pretty? To be honest, I was truly ‘concerned’. I secretely felt a bit like the housewife choosing the wallpaper while the others were building the house. I was surprised by my own thoughts so delved deeper into them. I considered the difference between ‘development’ and ‘design’, as in: developers make something work, designers make something look nice. Initially I thought that development is much more important. What use is a machine that does not work well? But since thinking it over, I have concluded that the designer’s work is equally important. Designing is storytelling. With the exterior design a newly developed machine or technology ‘sells’ its idea or concept to the designated user. Design can explain, show, convince and seduce. Good design might be the difference between implementation or rejection. Funny enough it made me realize that the right wallpaper in fact makes the house attractive to live in. A house may be a wonderfully developed shelter but people yearn for a home. And the feeling of ‘home’ is provided by the design. I am happy with this insight and think this is my ‘lesson learned’ in this week’s assignment. Having that said, I also noticed that the brain of a developer works differently from the brain of a designer, which may give rise to confusing or a lack in communication. This needs to be addressed, for in the end developers and designer supplement each other, so in fact they all should probably do some development and some designing together. 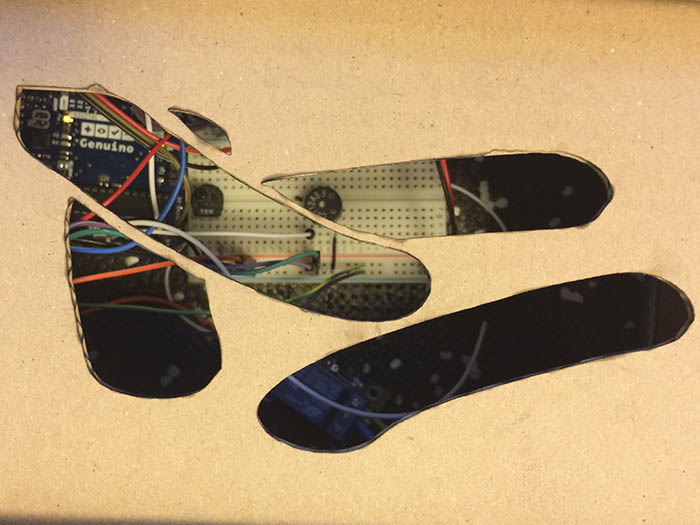 The lid of the Multi Processing Machine makes it possible to see the technology inside.