The main purpose of this week’s session is to understand and learn the basics of soft circuits and how to build them using different conductive materials to make sensors, switches and actuators. Moreover, learning how to embed the soft circuits in garments and wearables through soft-hard connections is also highlighted.

Electricity is the flow of electrons around a closed path (i.a. circuit) from negative to positive poles of the battery. The flow of electrons is measured in the direction of the EMF which is acting from positive to negative. While the electrons are moving, an electric current flows in the opposite direction to their movement. In other words, the current moves from high potential/ voltage to low potential/ voltage.

The flow of current is dependant on: 1- The strength of the battery (or source voltage/ EMF).

2- The type of the material used (resistance).

3- The amount of power needed by the load (e.g. light bulb).

Electrical Resistance is the property of an electrical element to oppose the flow of the current passing through it when a voltage is applied across the element. Mathematically, it is represented as the ratio of the voltage to current which is referred to as Ohm’s Law.

An electric circuit is a closed conductive path where electrons flow due to the effect of electromotive force. The circuit consists of a power source (i.e. AC or DC), electronic components , conductive path (i.e. wires) and a switch (optional). Circuits are usually connected in series or parallel. Where the current is the same for the series circuit and voltage is split (i.e. the summation of the voltage drop across all components equals the supply voltage) and the voltage drop across all components in paralel connections is the same while the current is split.

1- Resistance which is usually measured in Ohms per square inch and mentioned in the datasheet.

2- Stretchiness whither it is for woven, knit or nonwoven fabric.

3- Solderability -needs to be tested before using the material-.

4- Substrate and feeling of the material on the body.

This is one of the most important tests in electronics prototyping and testing. It is simply achieved using the multimeter by setting it to the sound wave/ diode icon, refer to the link to understand more about using multimeter to perform different tests. The following figure represents simple illustration to use the multimeter for continuity test. 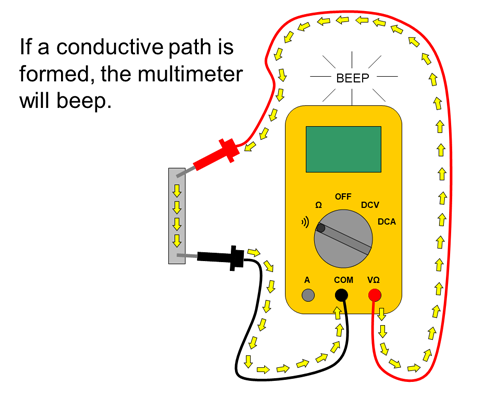 This is one of the most interesting materials I have even seen! It seems like the regular gray thread; however, if you use the continuety test with the multimeter you will hear "Beep!" which means it is conductive. I have bought some amount of bobbins from Adafruit Inductries for few dollars.

Other than the fact that it is conductive, it is quite thick which make it difficult to deal with and to sew like the regular thread. I have watched the videos below to understand how to deal with conductive thread using hand sewing.

This is another interesting material that has conductive properties/ low resistance and can be used in soft circuits to design traces or some components (e.g. switches and potentiometers). Just like the conductive thread and other conductors, this material has a resistance value that increases with the length of the material. I have ordered EeonTex conductive fabric from Sparkfun and this material has resistance of 8Ohm - 105Ohm/ sq.

The Assignment of the Week¶

To make at least one analog and one digital sensors and to interface sensors with actuators. Also, to learn how to embedd electronics in wearable applications and how to establish soft-hard connections.

The Used Equipment, Tools and Software¶

Switches and Push Buttons: In electronics a switch is a small device that can make or break the circuit. There are so many different types of switches and push buttons (momentary switch), however, they all act the same when the button or switch is turned on. Electrically speaking this means that one terminal of the switch is connected to the other making a path for the current to flow. The two terminals are nothing but two conductive parts. In soft circuit the situation is the same except for that the conductive parts need to be soft conductive material such as conductive fabric. The tutorial prepared by Liza has been very useful to make understanding and implementing different soft switches very easy.

The toggle switch is a type of electrical switch that is identified by the presence of handle that makes it possible to control the switching of electric current/signal from a power supply to a device or within a device. The toggle switch keeps the state according to the position of the handle. The push button does not have this feature as it is momentary switch. In soft circuits, the toggle switch should be represented by two pieces of contactors/ conductors that will sustain the state of switching as long as they are in contact with one another. This can be achieved using two sewable metallic snaps that should be complementary pair. The following figures illustrate this. 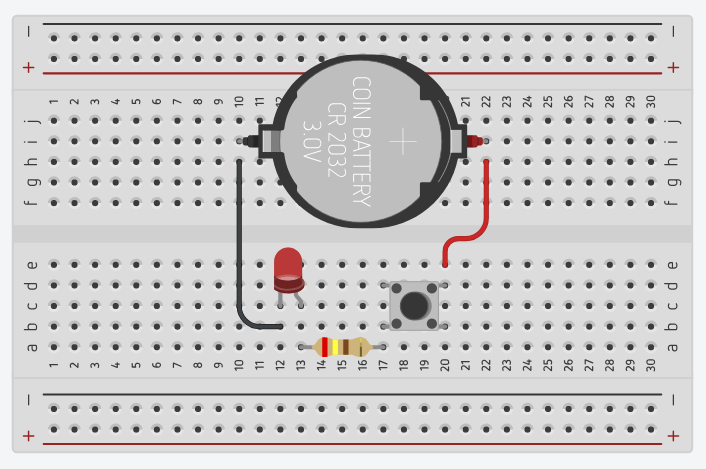 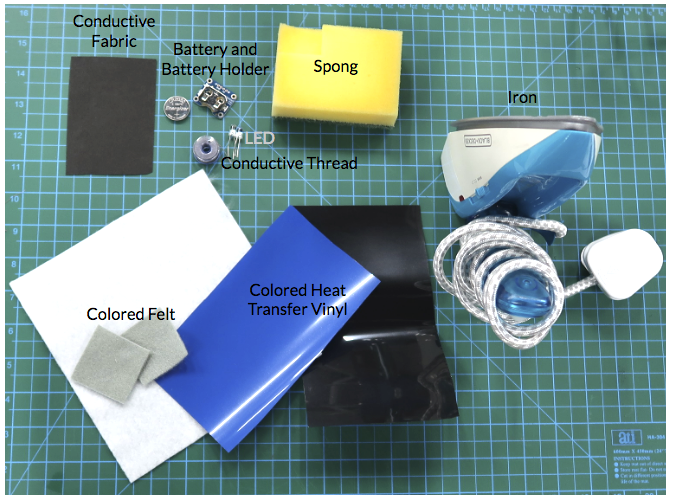 I have used Silhouette Cameo to cut the design and then to implement it using the iron to transfer the design to fabric. One of my favourite quotation is for Walt Disney; "If you can Dream it, you can do it.". 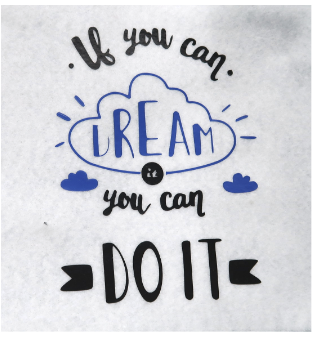 Then the leads for the LED should be curled using the pliers to be sewable. 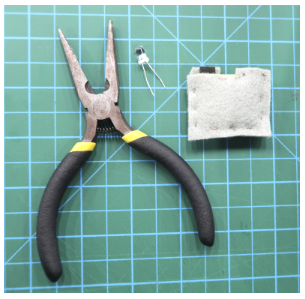 After designing and testing the switch, I have simply added an LED and a battery and I sewed the whole circuit as in the TinkerCAD schematics with the soft switch instead of the push button.

It was very nice and challenging to embed the components into the fabric (felt) especially that the thread is not the regular one. Therefore, I tried to make the components' connections tight and the traces strong and proper. I have also protected the final circuit for short circuit by adding another peice of felt at the back. Before testing the circuit, I have used the multimeter to do the continuity test to ensure the proper connections to the proper terminals. 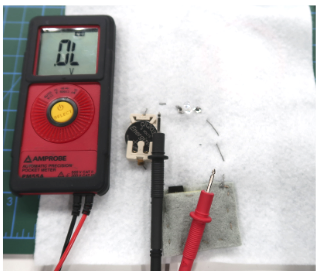 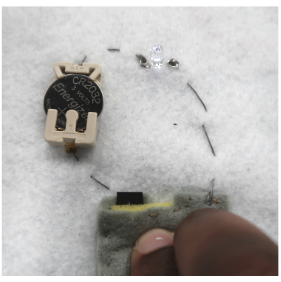 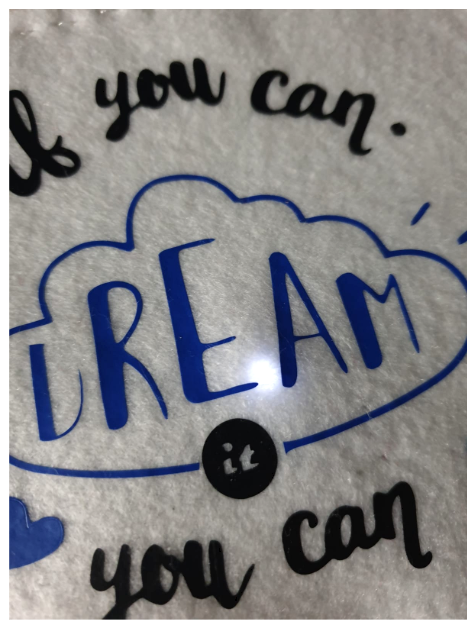 The final result was not very satisfactory fo me as the LED was a bit dimpped but it was very great to see the result. A better alternative for the LED could be using one of the LEDs in an LED strip as they are very bright.

First, I have designed a simple circuit using the same design as the first schematics with push button replced with a 1KOhm variable resistor. When changing the position of the dial the brightness of the LED will change due to the change in resistance and accordingly the amount of current flowing through the circuit.

This project was very interesting for me, I have again used Silhouette Cameo to cut a nice design that can be attached to a shirt but for testing purpose I made a small design on a peice of black felt. 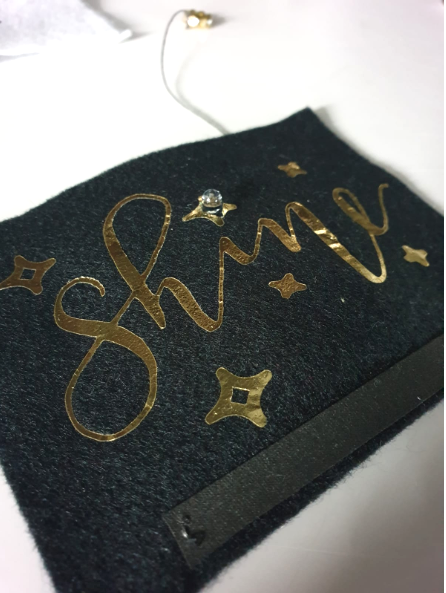 The following image shows the setup for the soft circuit design and sewing.

It was very nice to see the LED illuminating when the golden bead touches the conductive fabric. 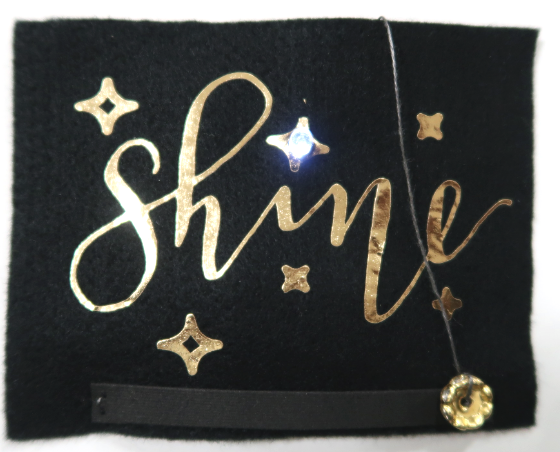 When sliding the bead along the conductive fabric, the brightness of the LED was changing as shown in the following video due to the change in resistance.

3- Interfacing a controller board with soft circuits¶

First I have designed the circuit on TinkerCAD and then I have implemented it over a breadboard.

For me, it was more convenient to test the circuit using breadboard and a regular Arduino Uno board. First, I have opened Arduino IDE software and included Adafruit Neopixel library. Then, I have opened one of the examples from Neopixel library "Button Cycler" which is mainly designed to demonstrate using an input device (button) to trigger changes on the lighting pattern of the NeoPixel. When the button is pressed it will change to a neopixel.

I have simulated this code in TinkerCAD and got the following patterns.

I replicated the circuit using real components and it was very interesting to see the result.

Next step is to imbed the design to the fabric. I wanted to design a cute unicorn medal for my niece's bag. I have used colored felt and heat transfer vinyl to design the unicorn. 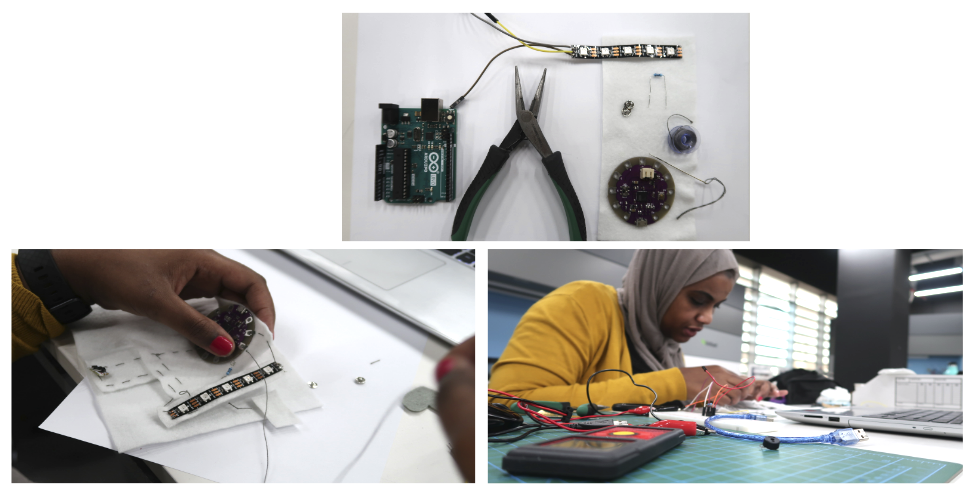 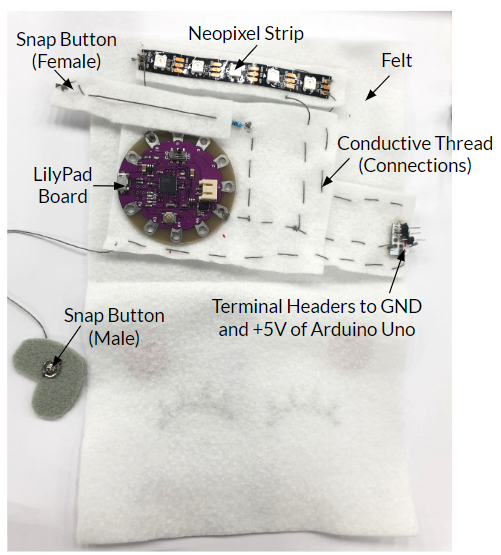 I have tested the circuit by powering the LilyPad and Arduino Uno together.

After that, I secured the circuit on the felt pieces by simply sewing the felt into the back covering layer and I have also applied Kapton tape to places where the conductive thread was not sewed to avoid short circuits. 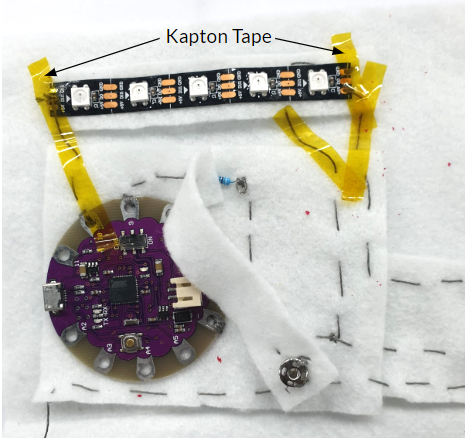 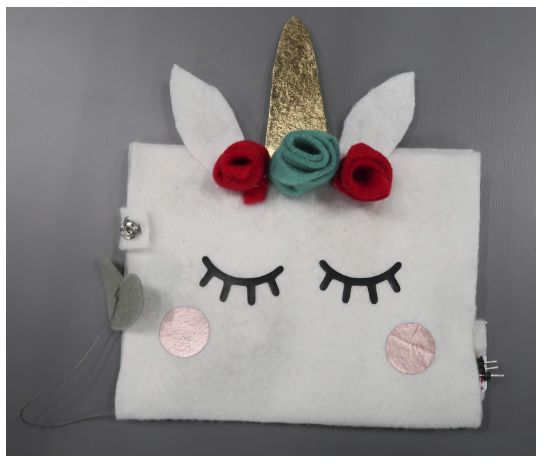 Embedding simple circuits with simple tools like LEDs and copper tape was very interesting for me to integrate within my craft work. I made a simple birthday card on cardstock paper and designed a simple circuit for an LED that flashes when the cupcake paper is tapped or pressed. The configuration is very simple and is using Flap/ Tap switch as demonistrated in the following diagram. 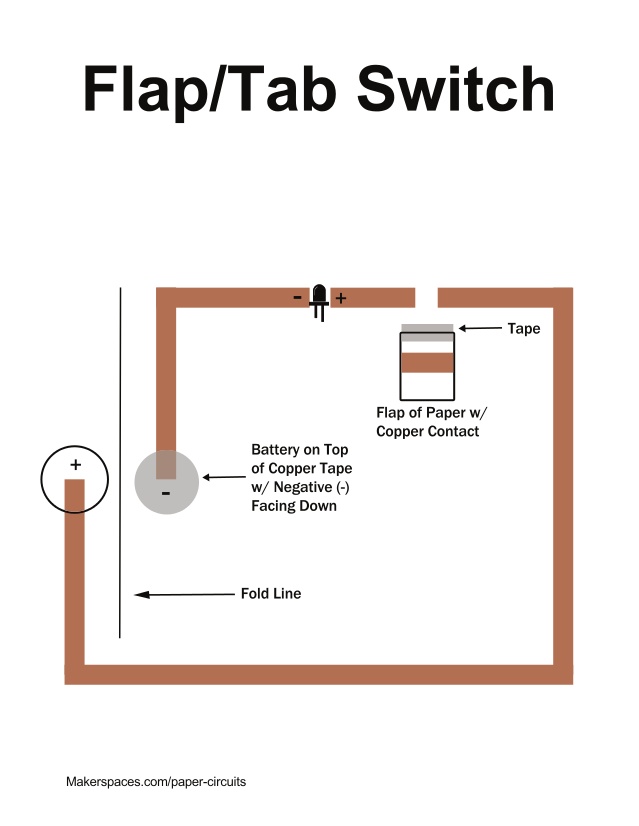 My birthday card is here :)

During COVID19 period we have done several interesting workshops realted to e-textiles and wearables. This first workshop was related to input devices such as soft switches; while the second was related to output devices -refer to Wearables II-. 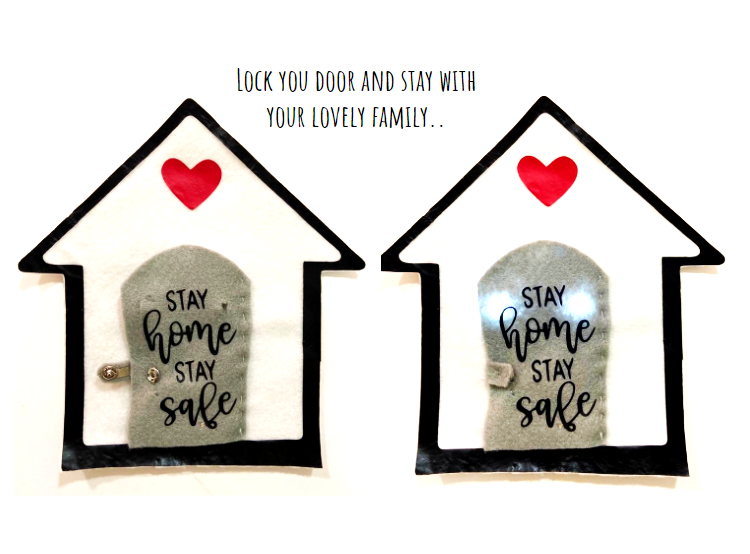 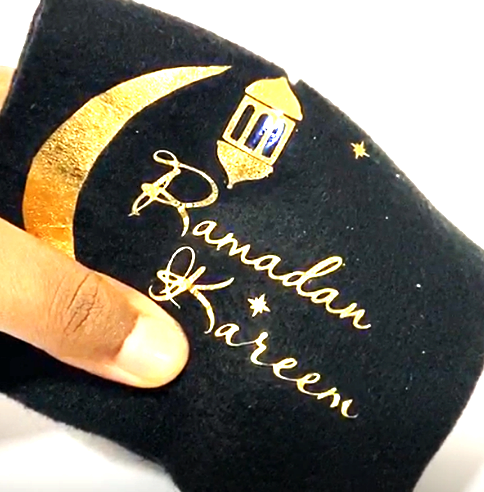 The following video is a basic tutorial for the soft circuits.