These are the two final sensors that I have come up this week. Below I will explain a bit of the theory learned to get there and after the step by step to replicate my sensors. 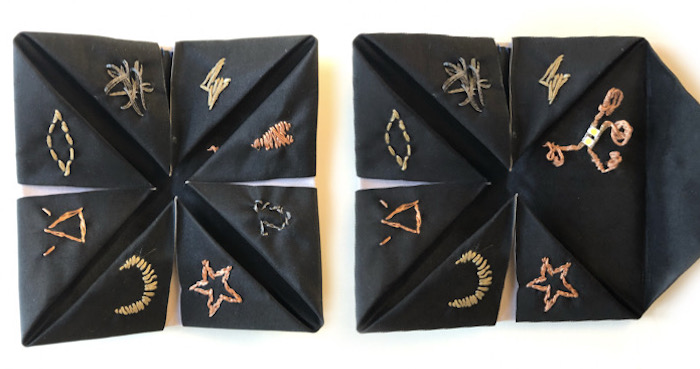 a bit of science never hurts¶

This was an intensive week to remember/learn a lot of eletronic concepts and also how to apply them into textile. Here a summary of my notes on the week. 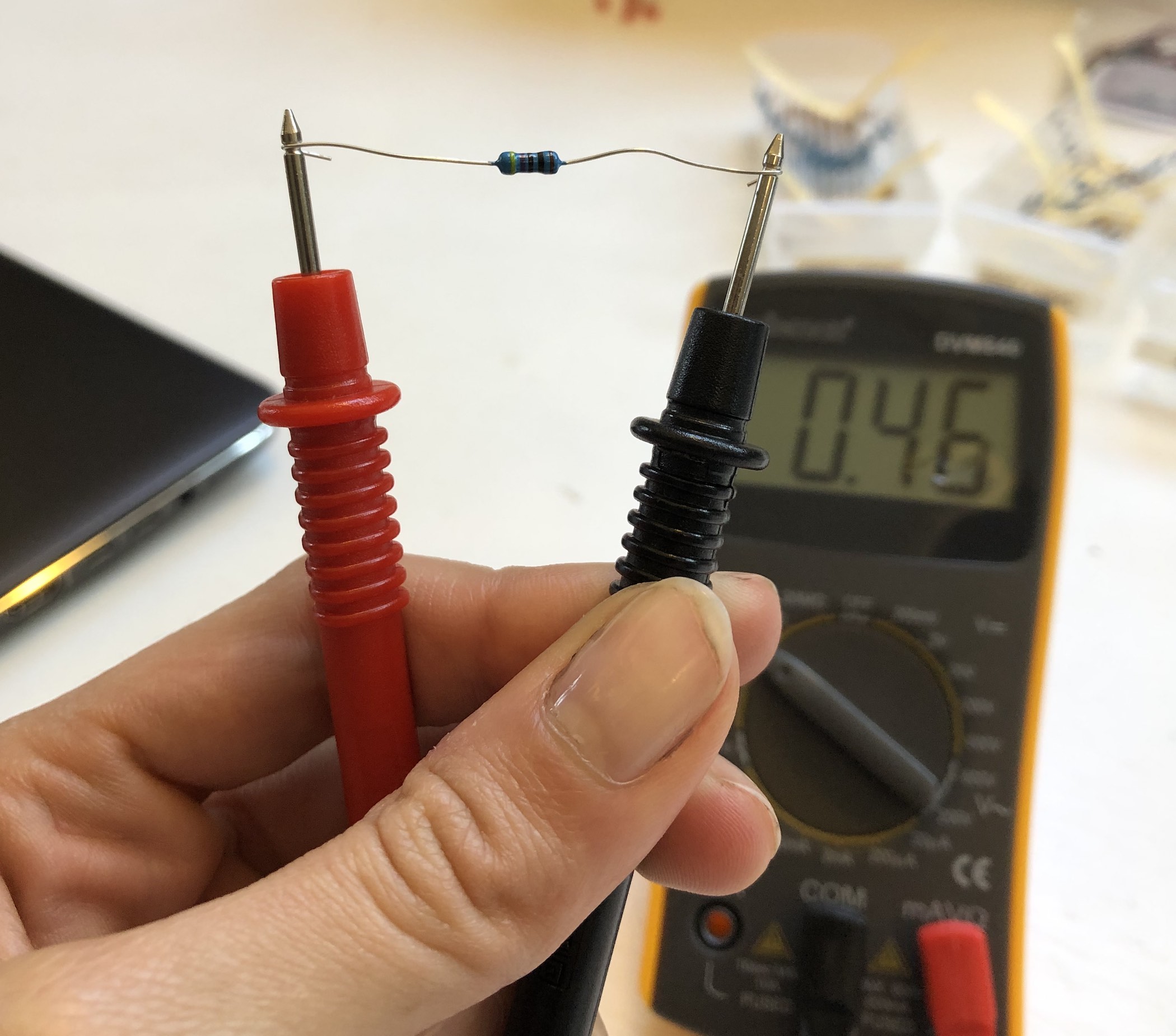 nope, not this one 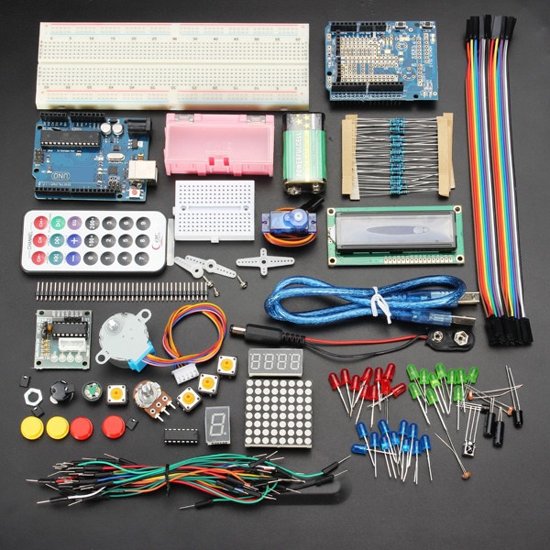 I never thought I would look at this picture and desire such a thing, but in case you share the feeling you can buy this Arduino starter kit here

Before diving in our week's assingment we built a series of circuits with Emma: 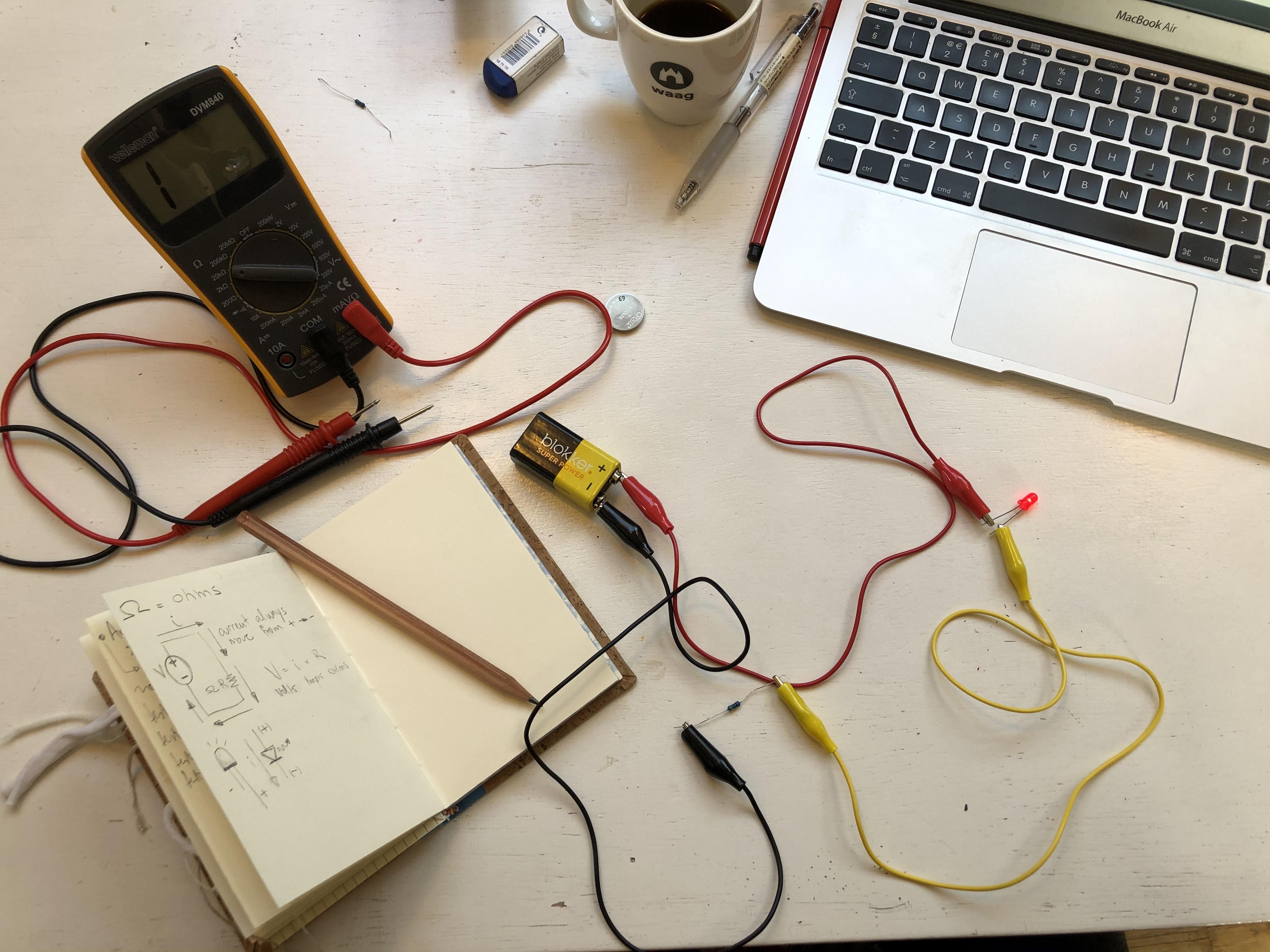 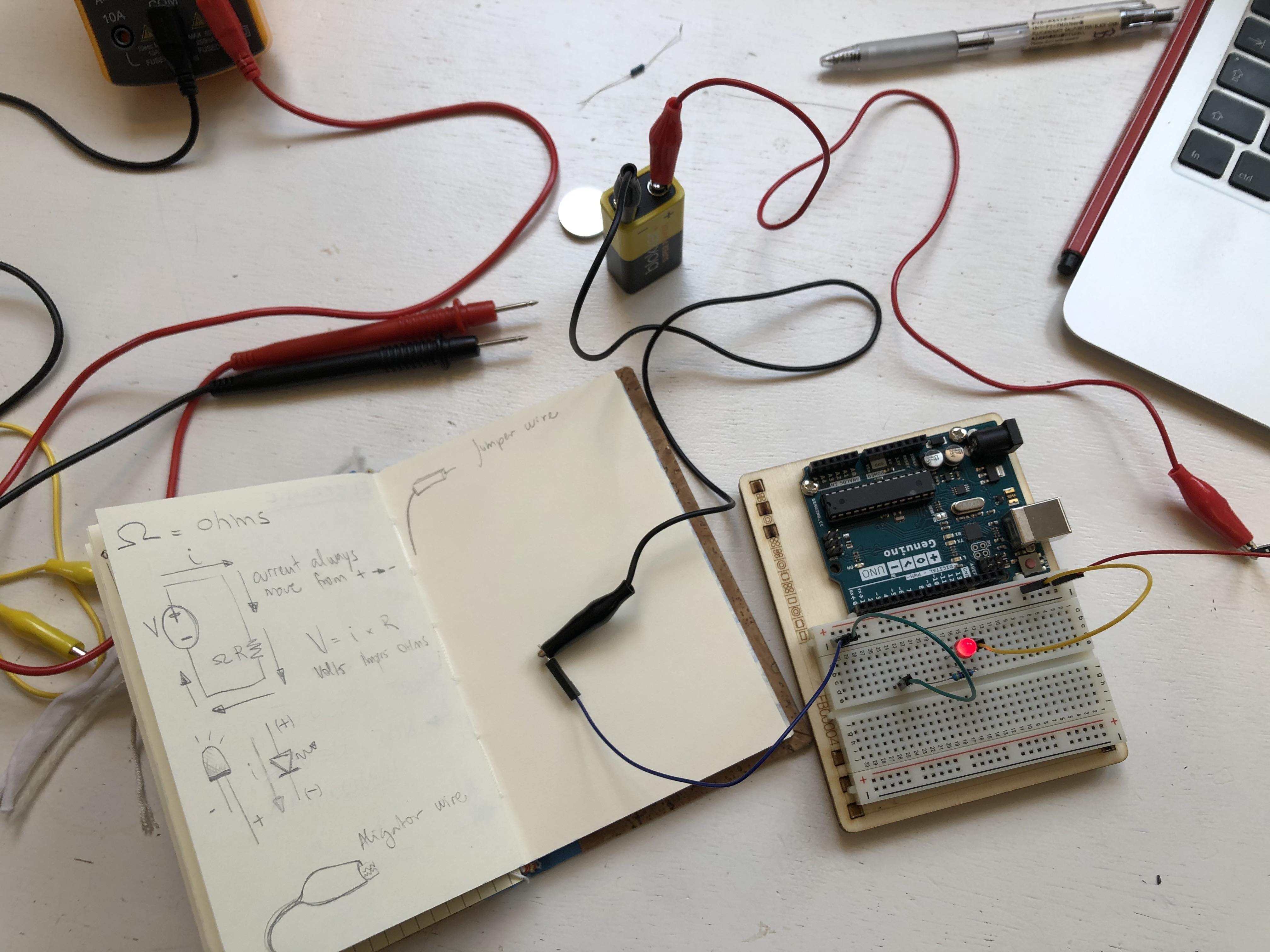 2 LED circuit with battery on Arduino 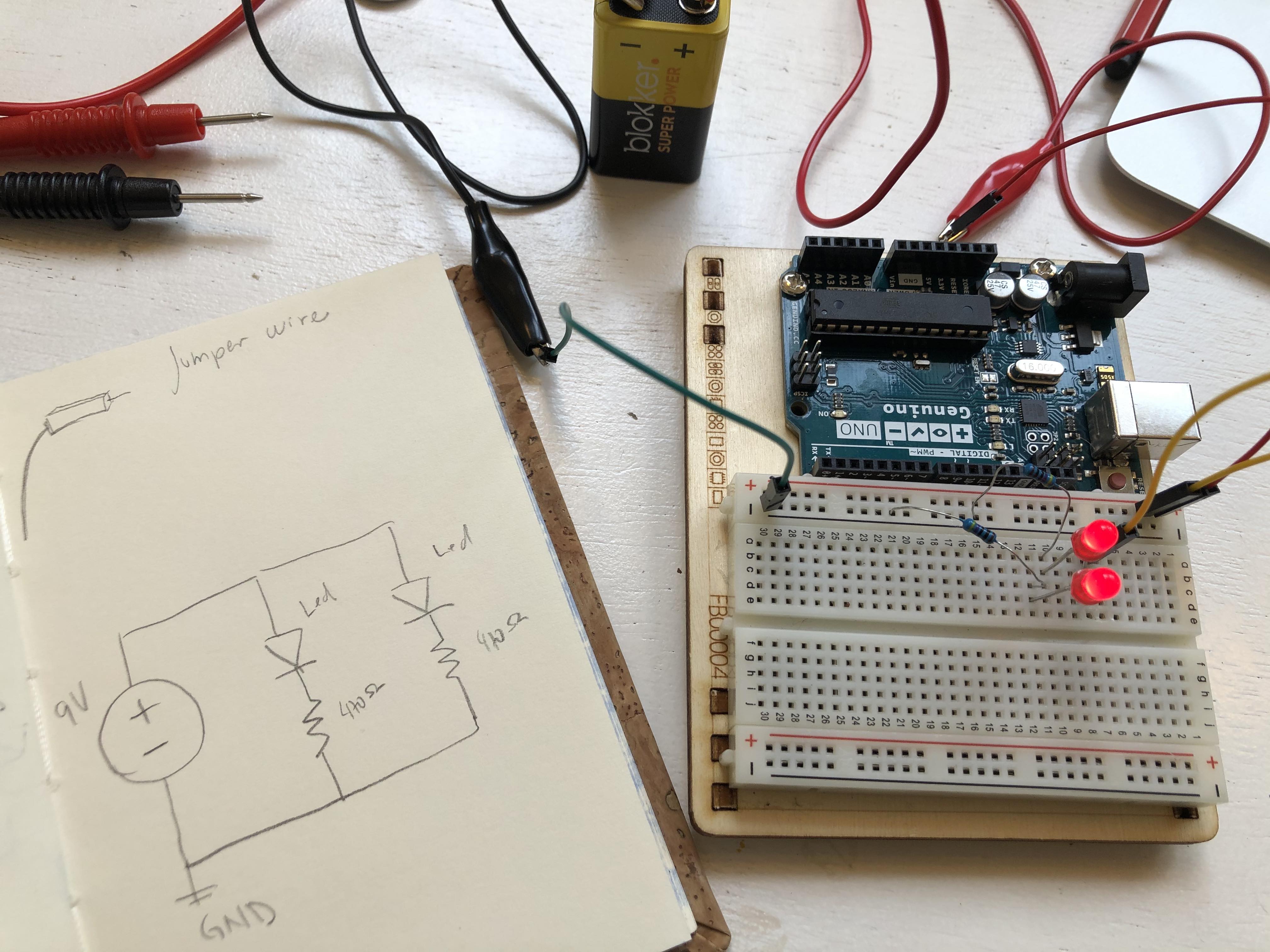 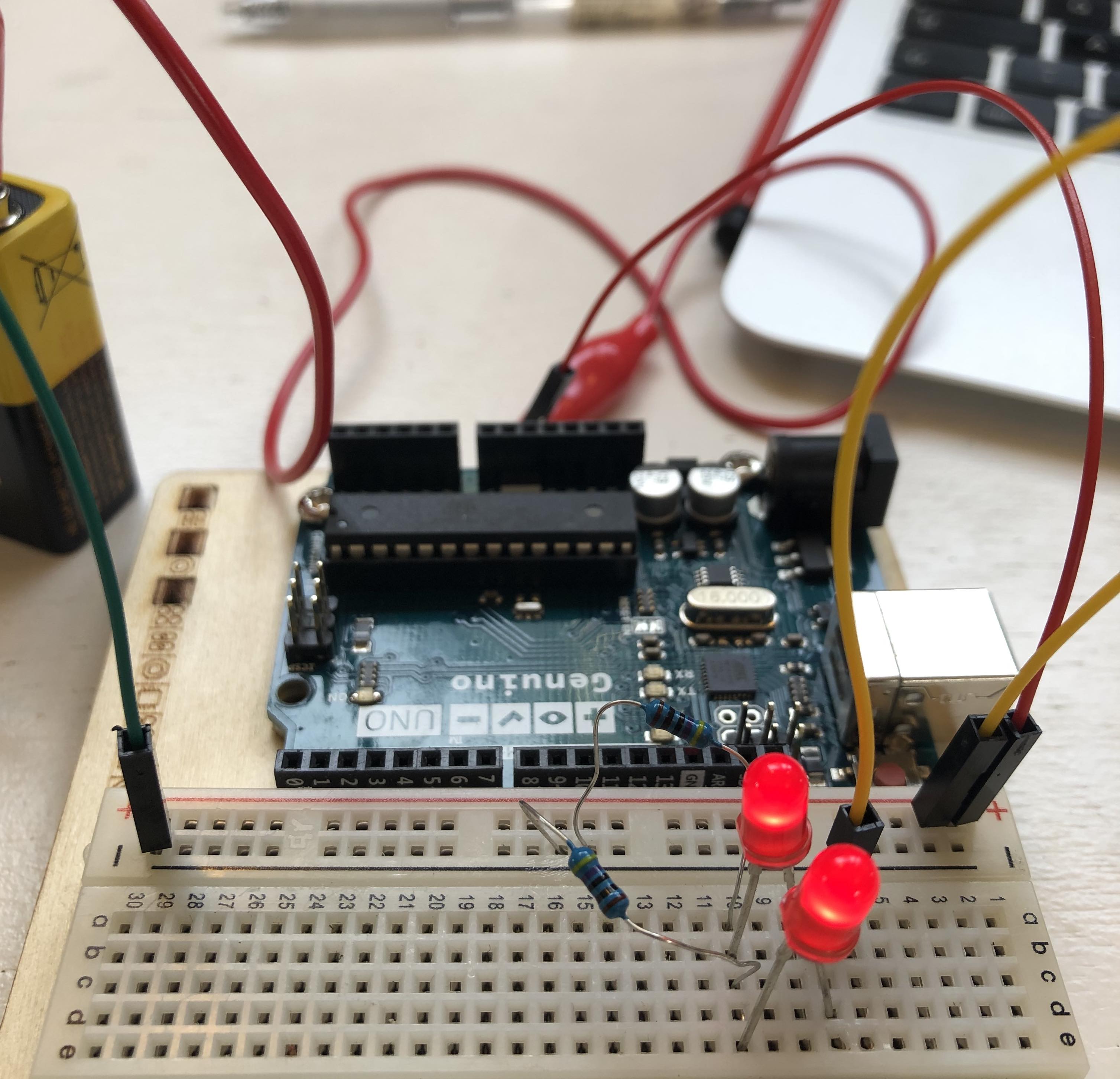 Connecting Arduino to the computer and playing with the LED, blink and fade programs 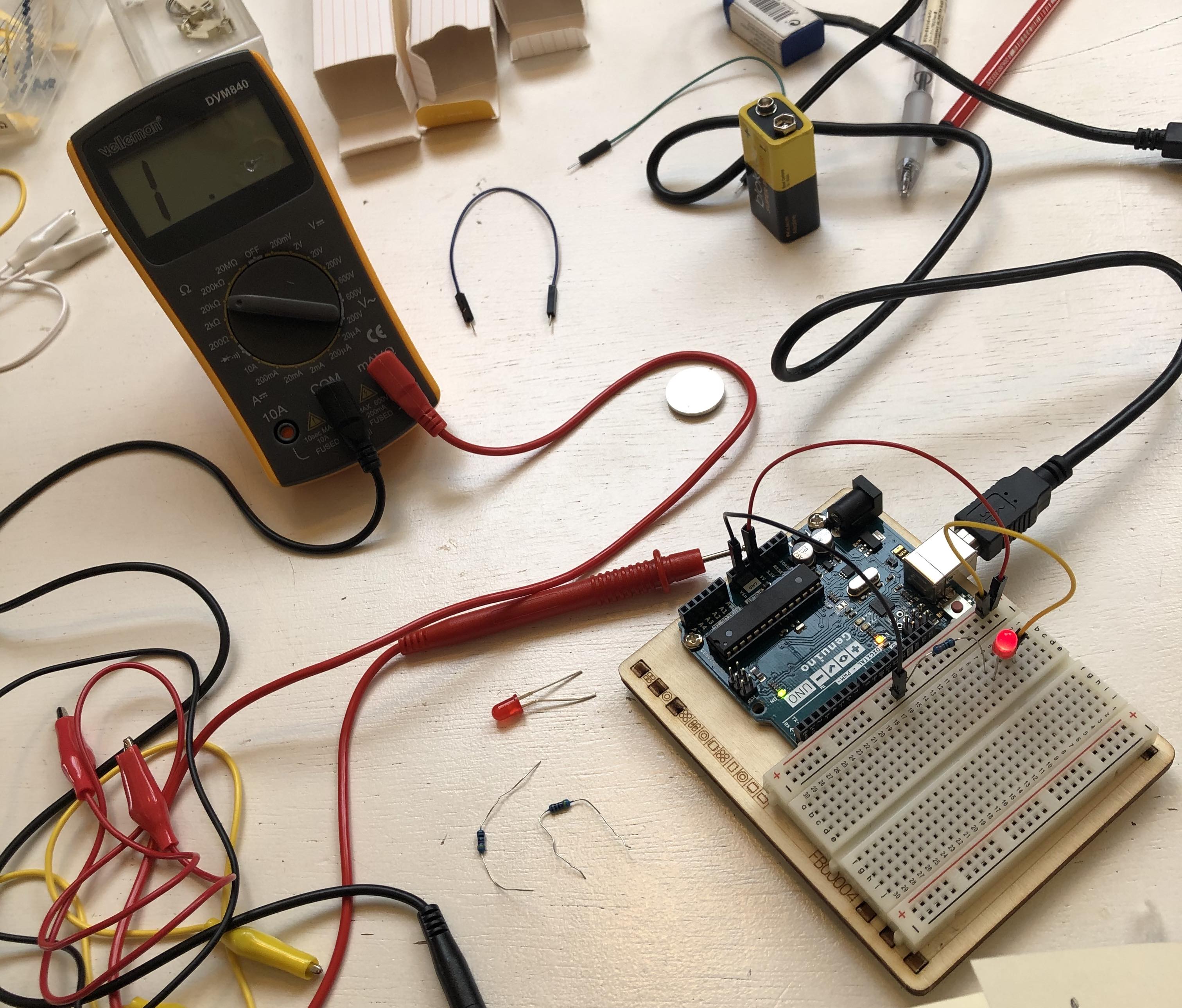 Circuit with digital sensor/switch and LED 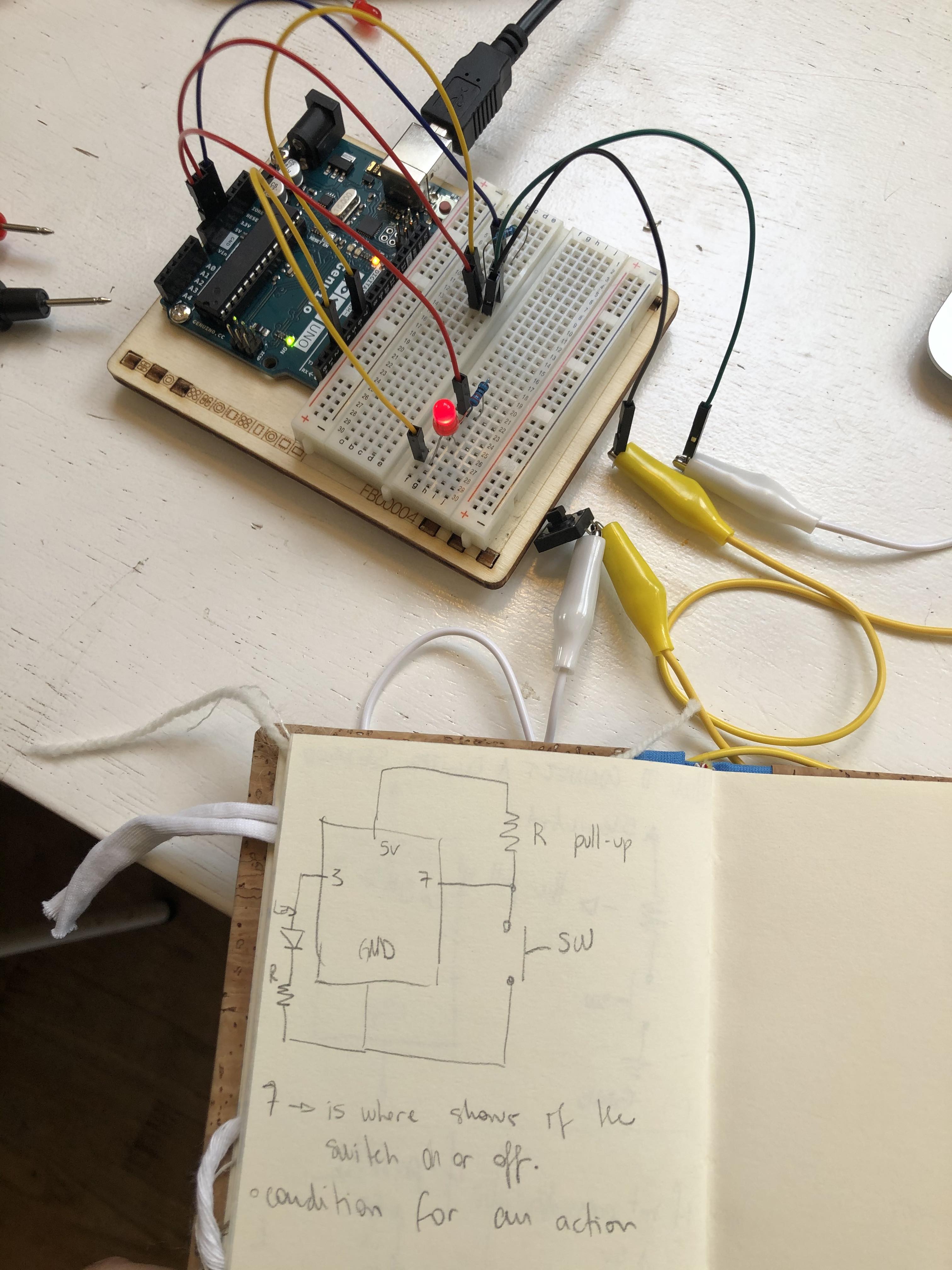 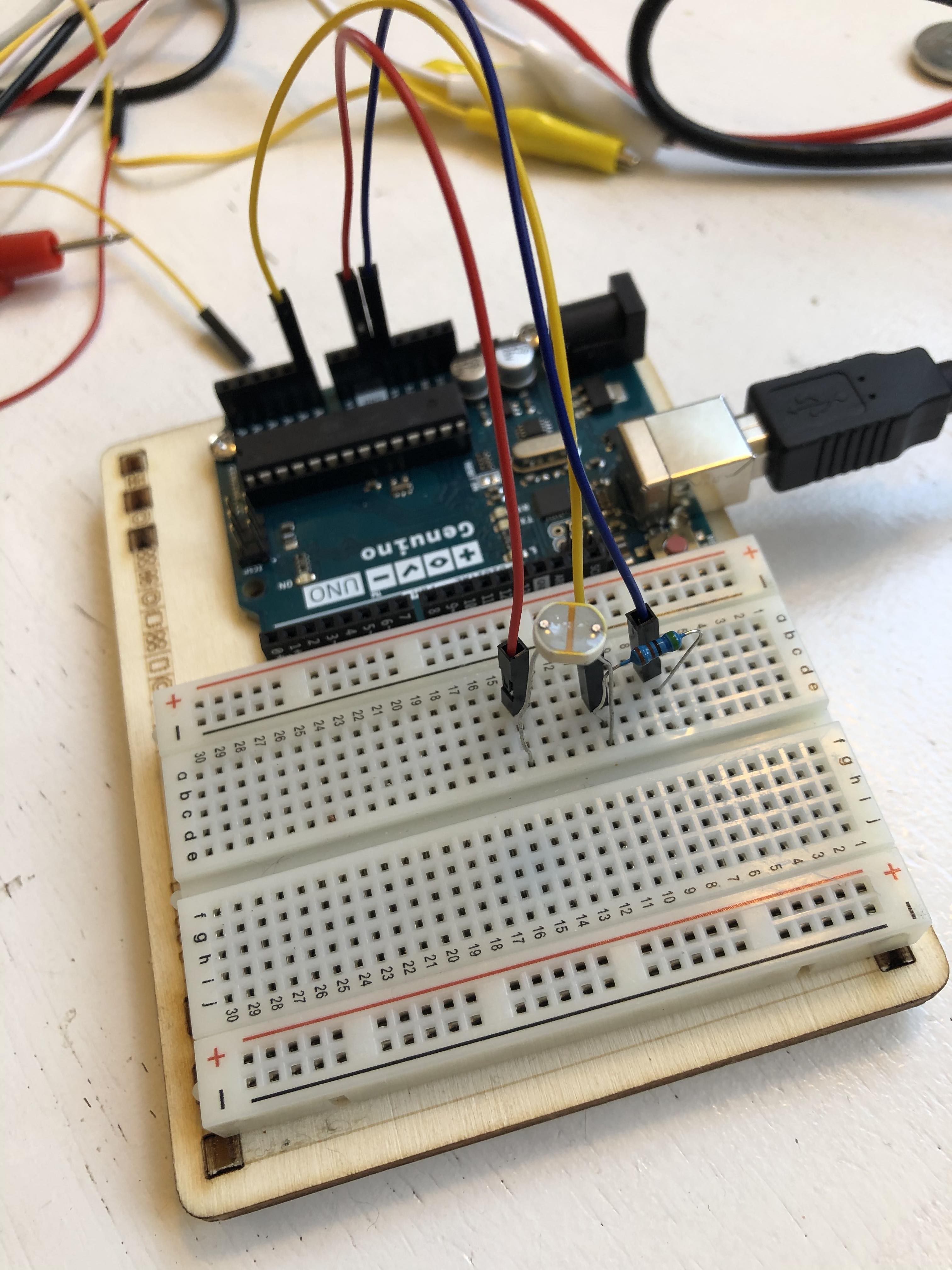 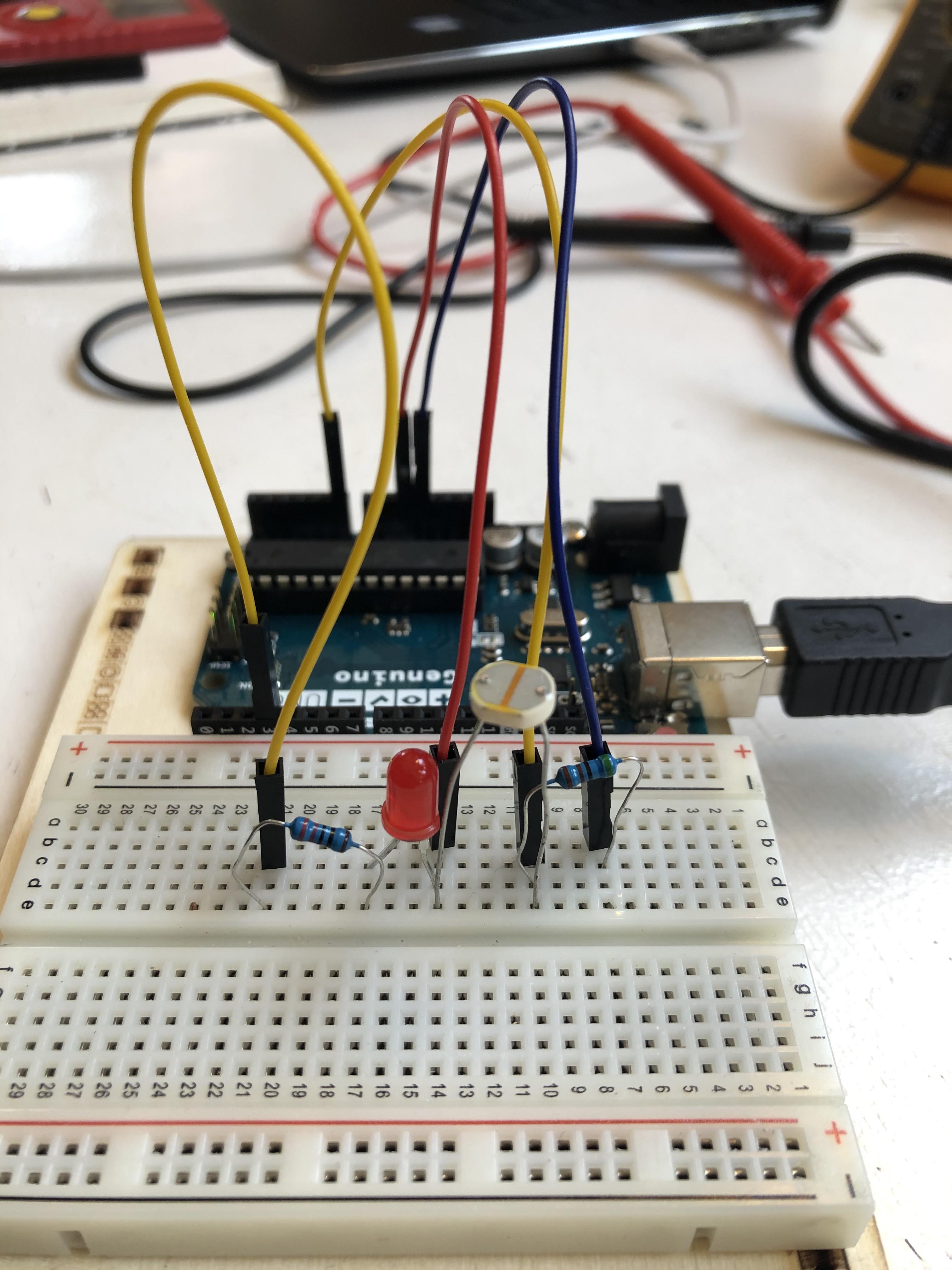 Circuit with fabric piece as an analog sensor 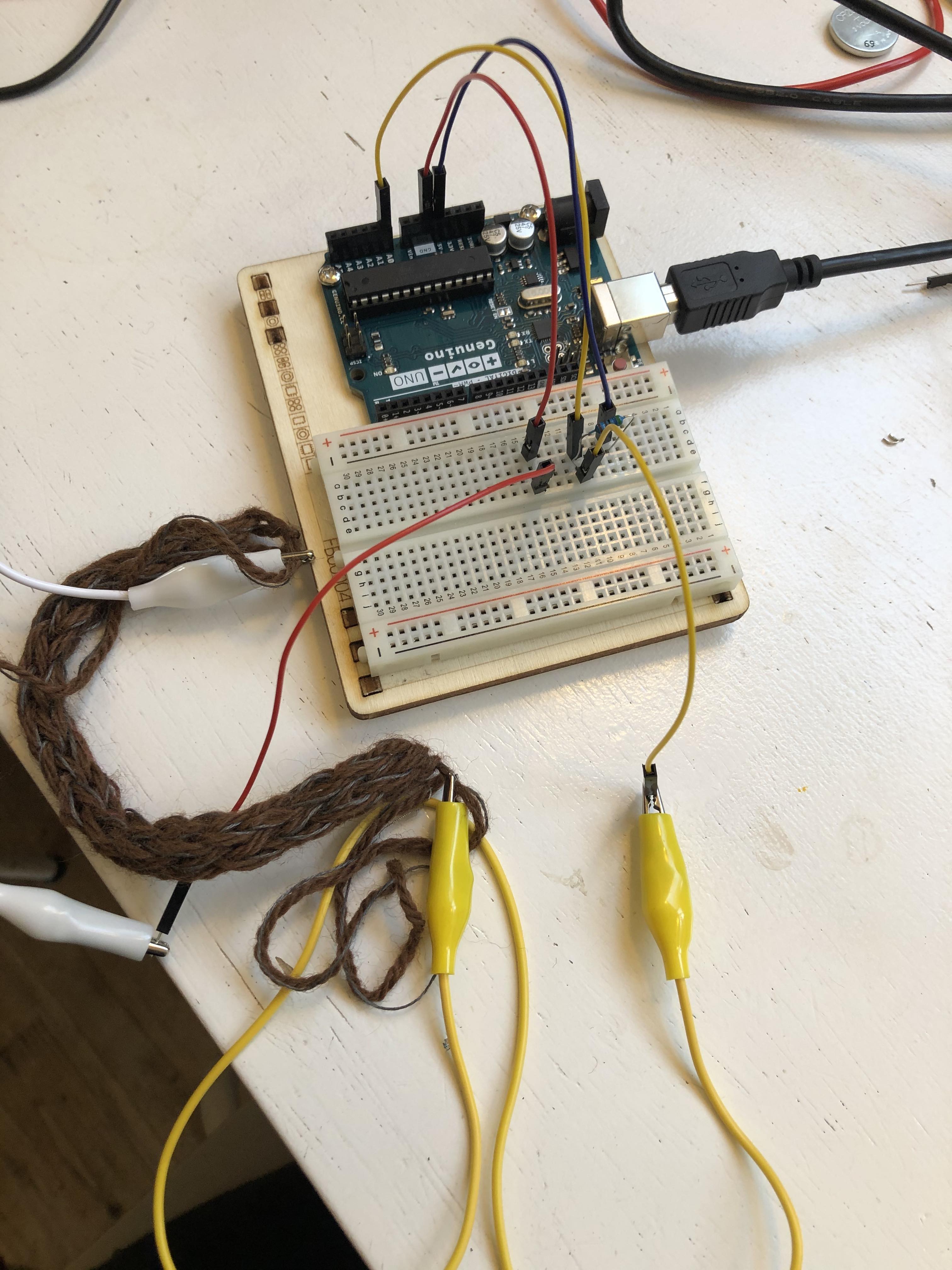 We also had a little workshop on how to use the soldering iron connecting different parts, specially when working with LED. Here is Bela on her first try: 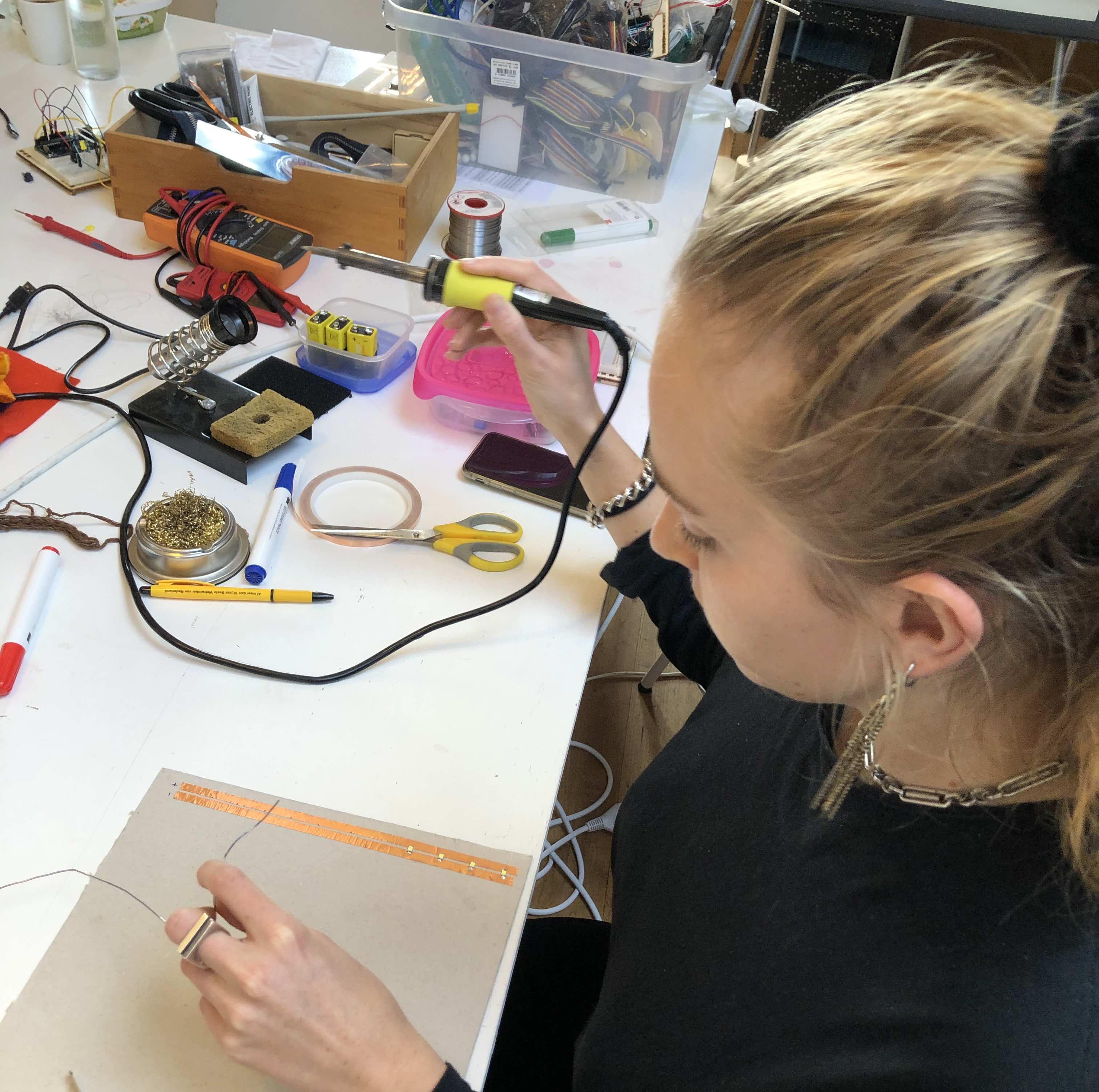 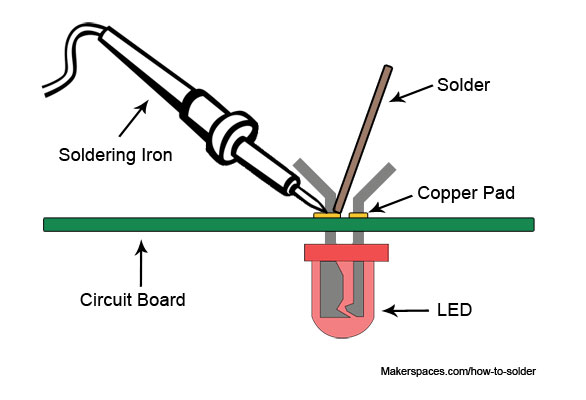 We had the chance to see/touch many e-textile samples from the E-textile Summercamp. While exploring them I liked the idea of doing some sort of game. So playing a bit with paper I remember this game from my childhood, apparently in english is called Fortune Teller Paper but it has also many other names. Was also funny to realize that for everyone I showed in the lab, they immediately recognized the game, no matter they nationality (so far Brazil, Italy, Portugal, Netherlans, Australia and Aruba were tested).

The first step of the process was to do an easy prototye (fail-fast mentality here). So I just got some different fabrics that were available and tried to see which one could be foldable but also maintaining the soft material look and feel. I came up with this sort of nylon tafeta (black side) bonded with a nice soft fabric, swede like (white side). I cutted and made the shape so I could start experimenting on where would I place the circuit and if it was feasible.

First prototype was done with copper tape and some conductive threads, by checking with multimeter and then also with arduino, it seemed that I had something possible. From this step on, I went back to paper and got my schematics done, best tip here is USE DIFFERENT COLORS FOR DIFFERENT STUFF (tks Emma). From the schematics, was more a matter of trying to fit everything and ensuring that the traces were not touching when folding the fabric. 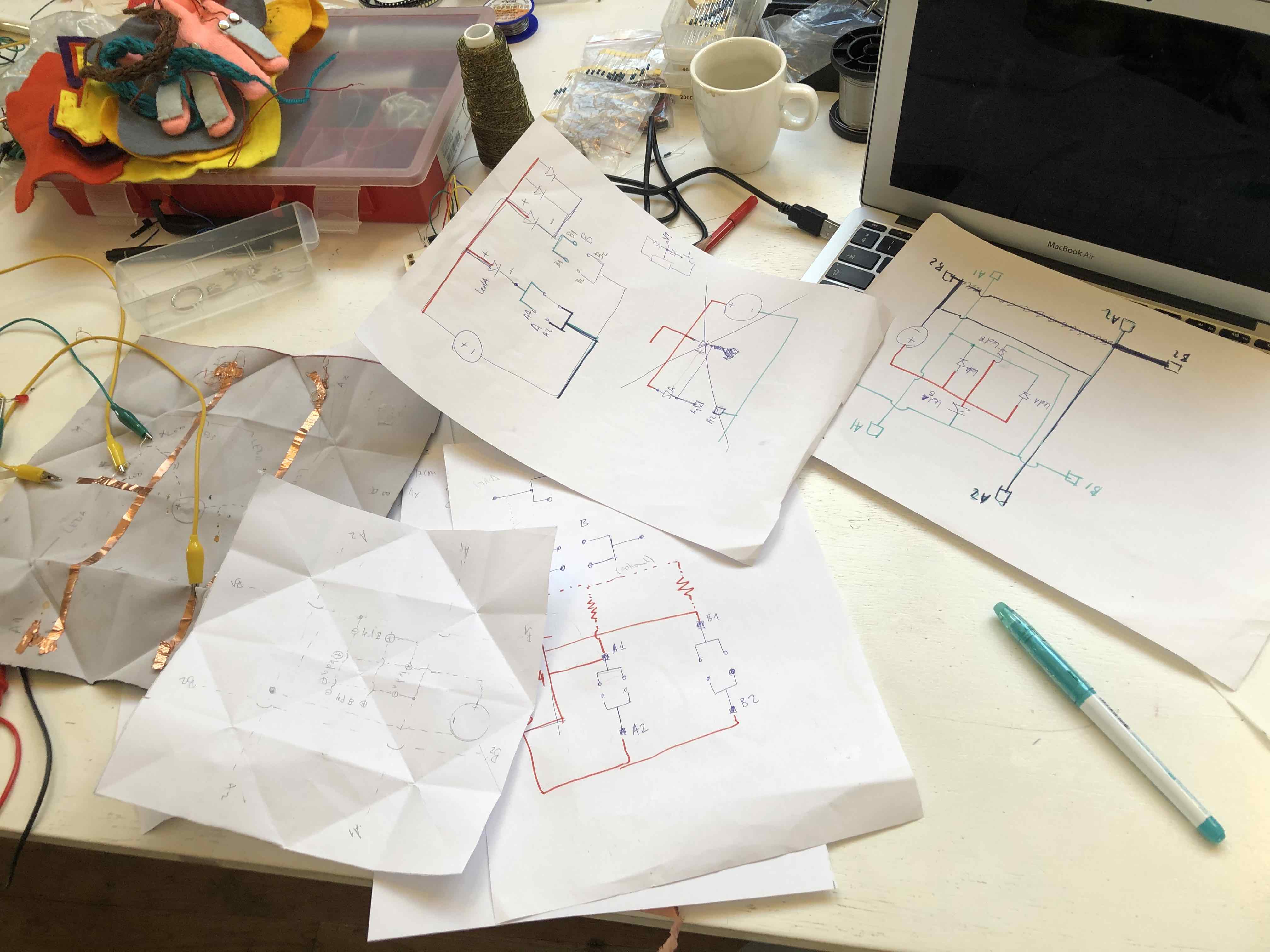 prototype test with multimeter and arduino

From this moment, I made the exact measurements I would like to have my final switch (20x20cm) and made the traces drawing in Rhino so I could laser cut the copper fabric in the exact shape needed. The laser cut settings for the copper tafeta was Power 20 Speed 100. 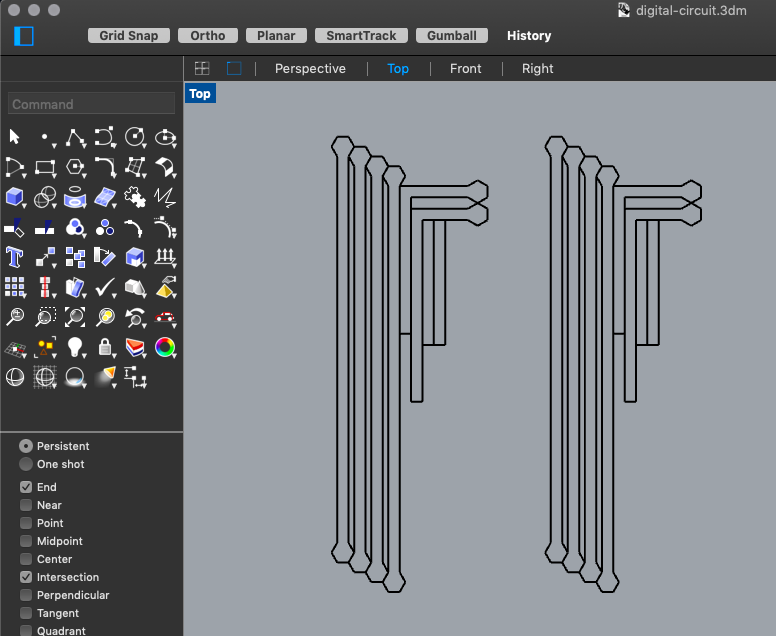 After laser cutting, I applied the heat'n bond paper glue. Actually I realized this was better to be done before laser cutting, but if you do it fast enough it also works. Here is the technique I used! 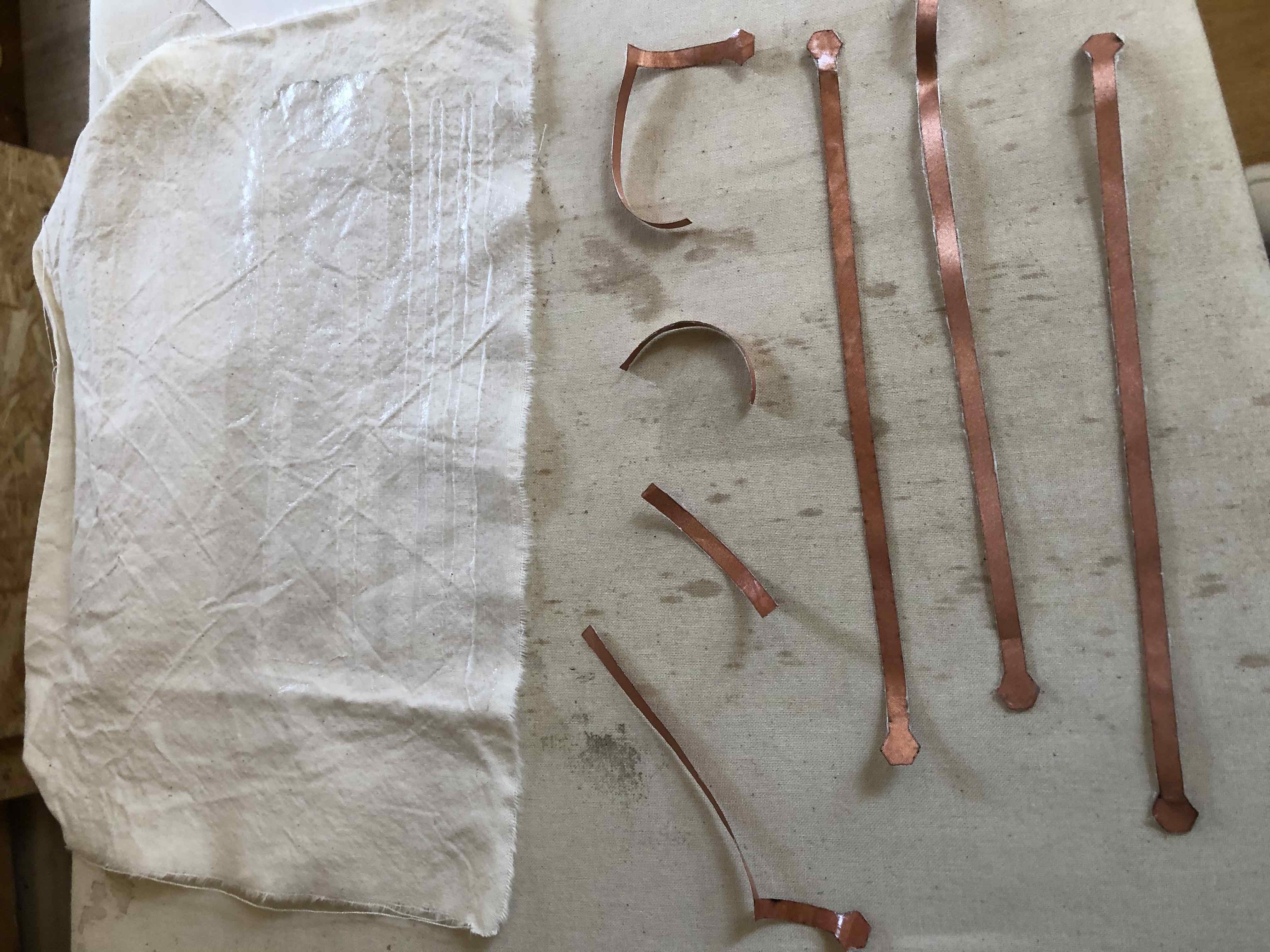 I also laser cutted the main fabric in a perfect square and iron it when folded, to help keeping the fold in place. Then I did the embroidery with conductive threads. 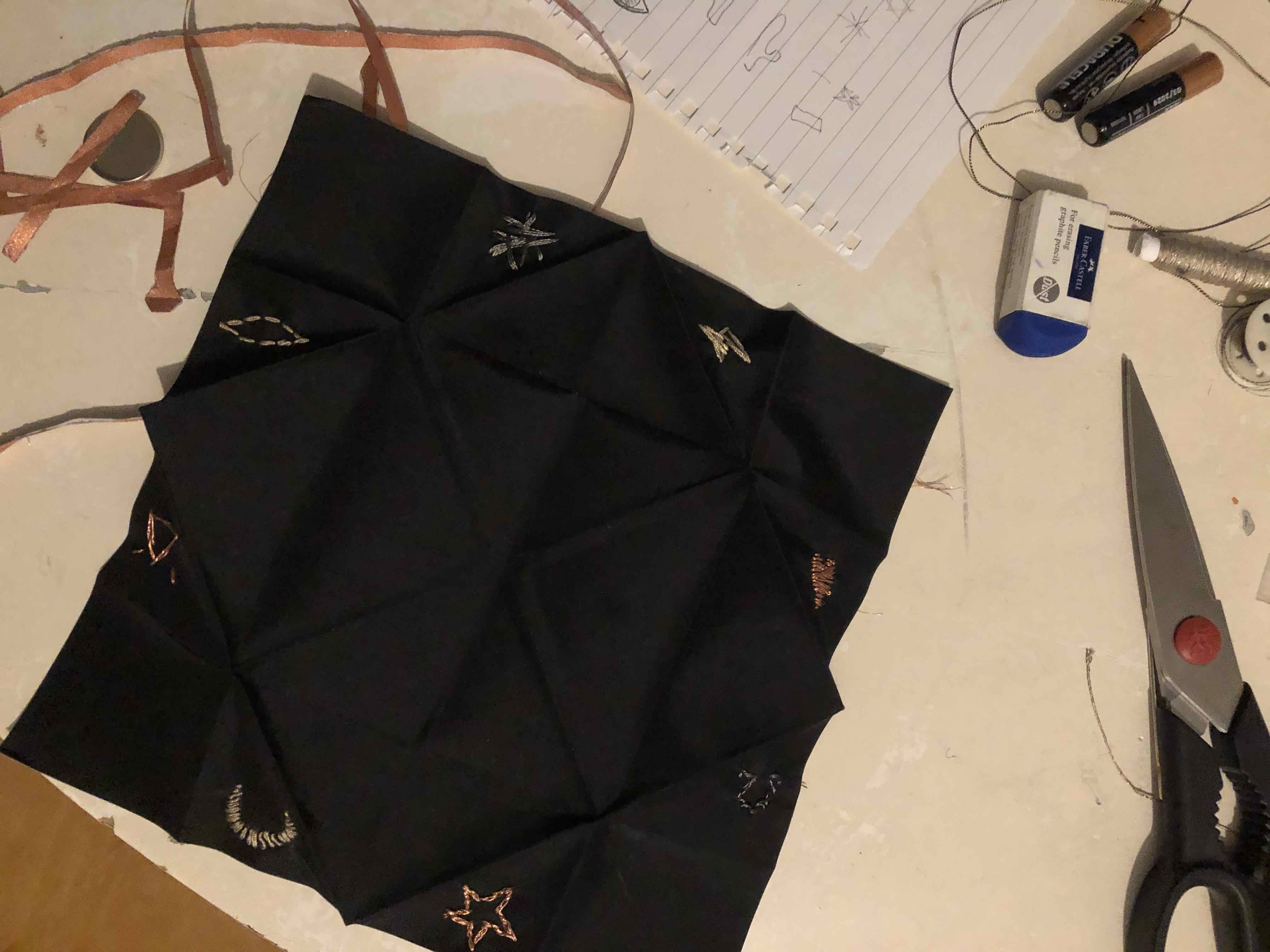 Applying the copper traces using an iron. Was important to put some non-conductive fabric in between traces avoiding short-circuit 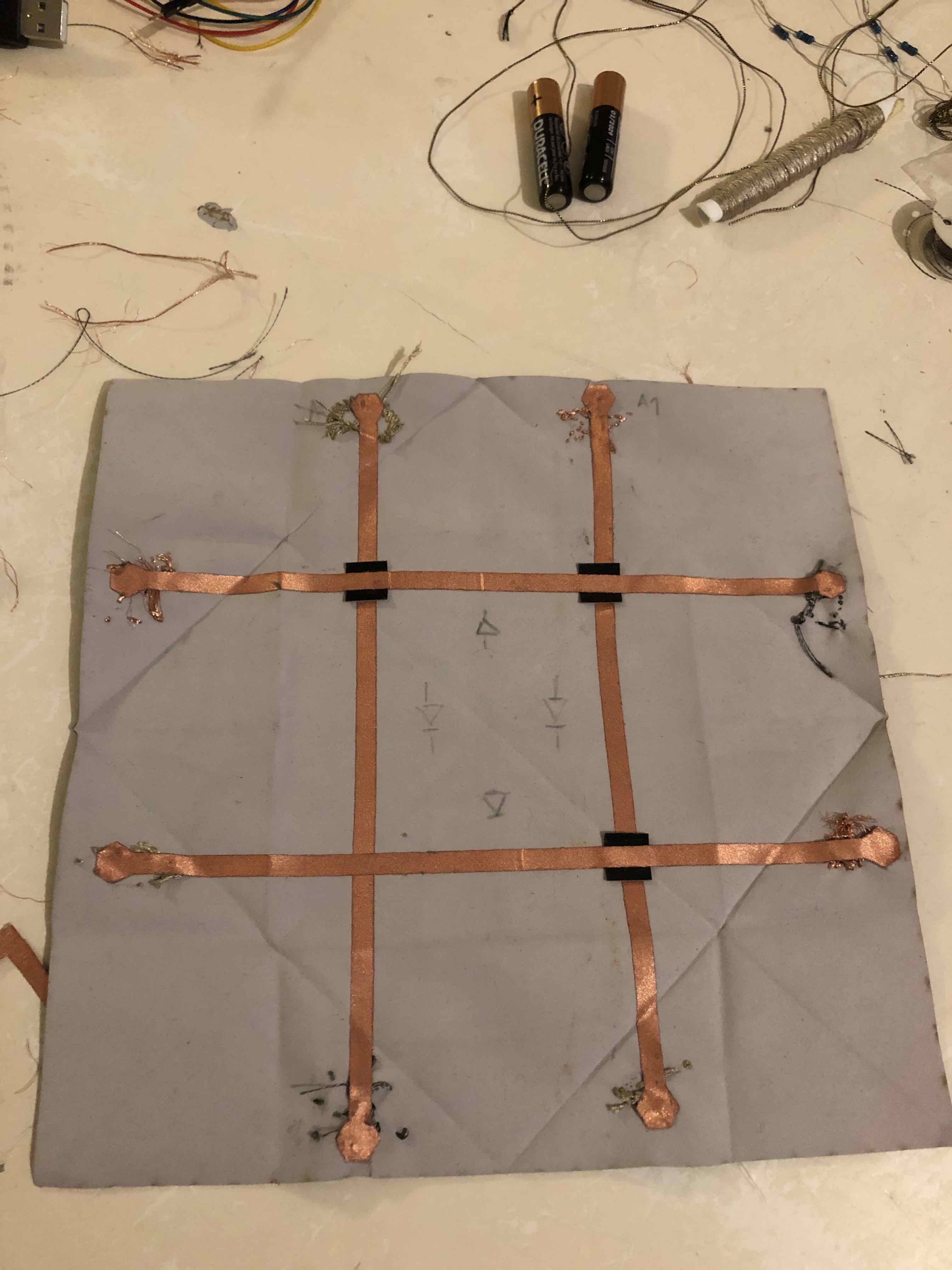 After that, I solderd the led mini lights into a sort of thicker thread and sewed on the position that would allow me to connect everything right in the back 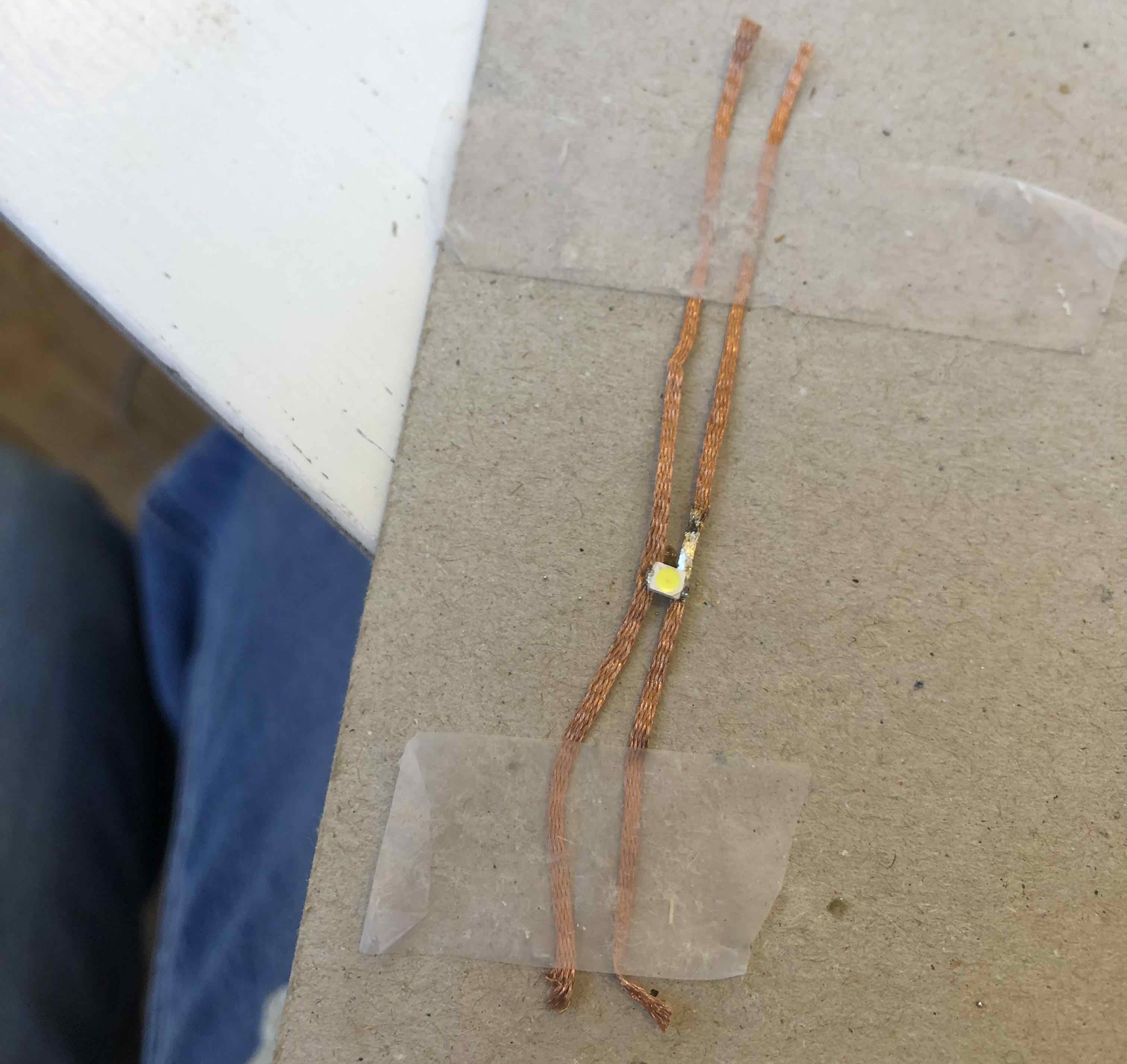 This was the final look of the game, so far I only have one "surprise" on the heart position. So as the person opens that choice the LED light turns on, because the opposite sides are the switch.

The back looks like this. I made a little pocket to accomodate the battery. I have still place to do othe 3 LED lights on the other side. 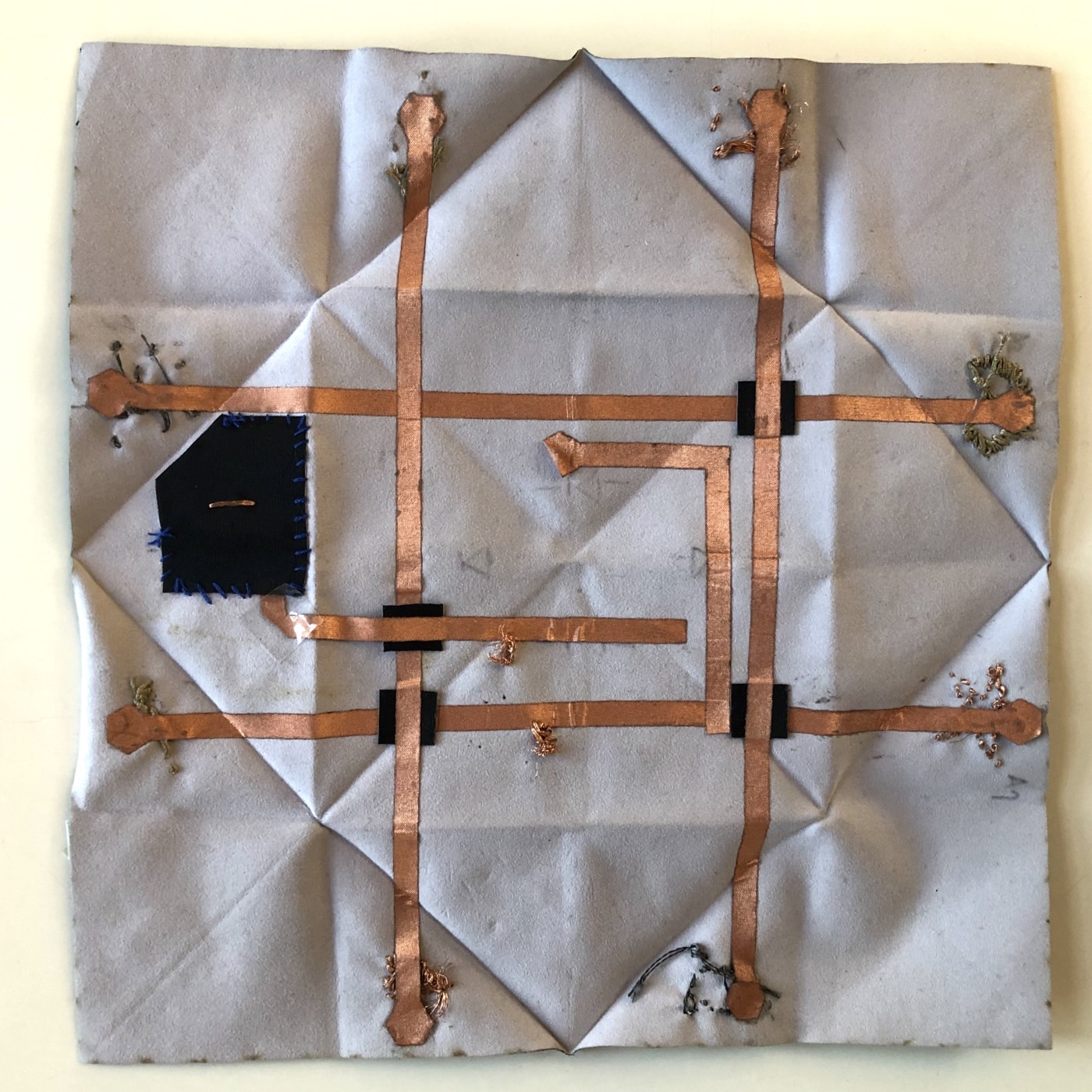 For the analog sensor I choose the option of a bend sensor, by exploring the human body joints, I had an idea to use the sensor as some sort of ortopedic helper. As I work most of the day in front of a computer is very common that I'm not sitting straight and later have back pain as a result of bad posture. Therefore the goal of this sensor is to be attached to someone's back and by have the resistance varies as the column bends.

I followed Lisa's demo, using a neoprene fabric, with conductive thread and a sheet of Velostat in between.

Testing the prototype with Arduino. Since the variation of resistance is not so big, the calibration moment is very important, I suggest to change it for a longer time period.