aka as the extreme geek week

This week we explored the world of parametric design, digital 3d modelling and 3d printing.

Oh wow, back to documentation! After one week off (thanks to Loes) it seems like the rhythm is really gone and need to channel some greater energy to flow into normal again. 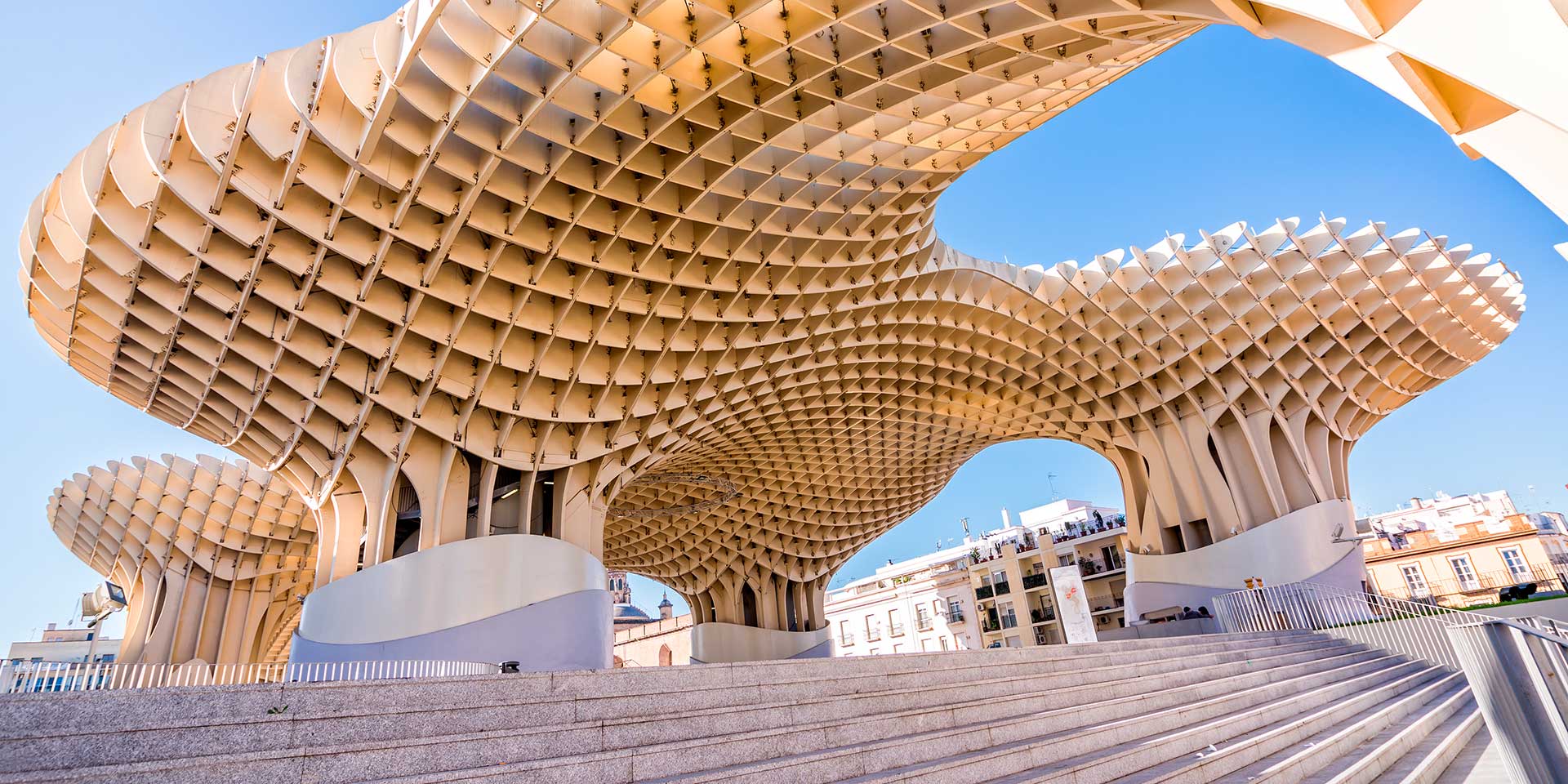 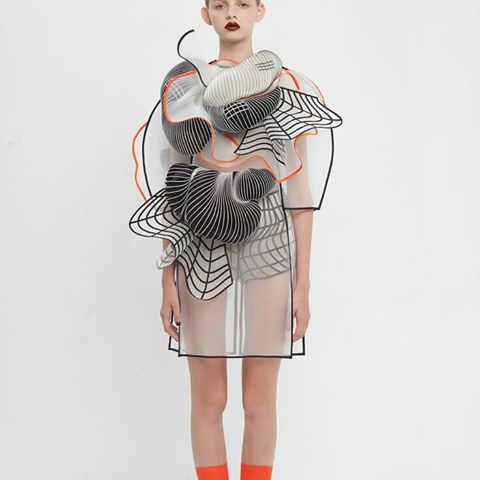 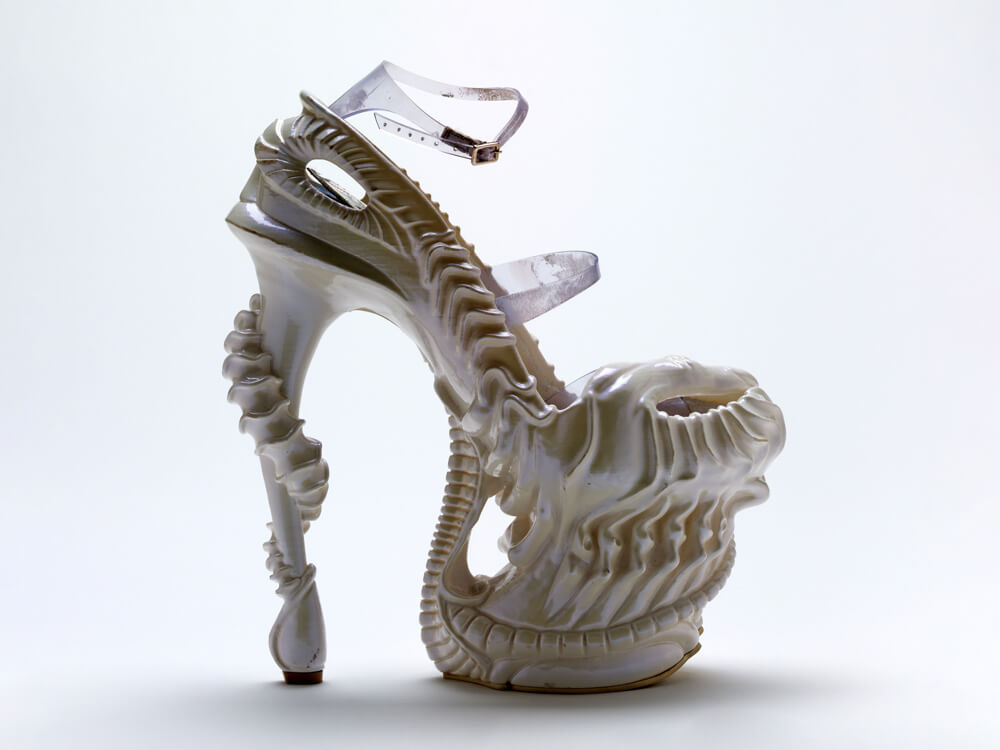 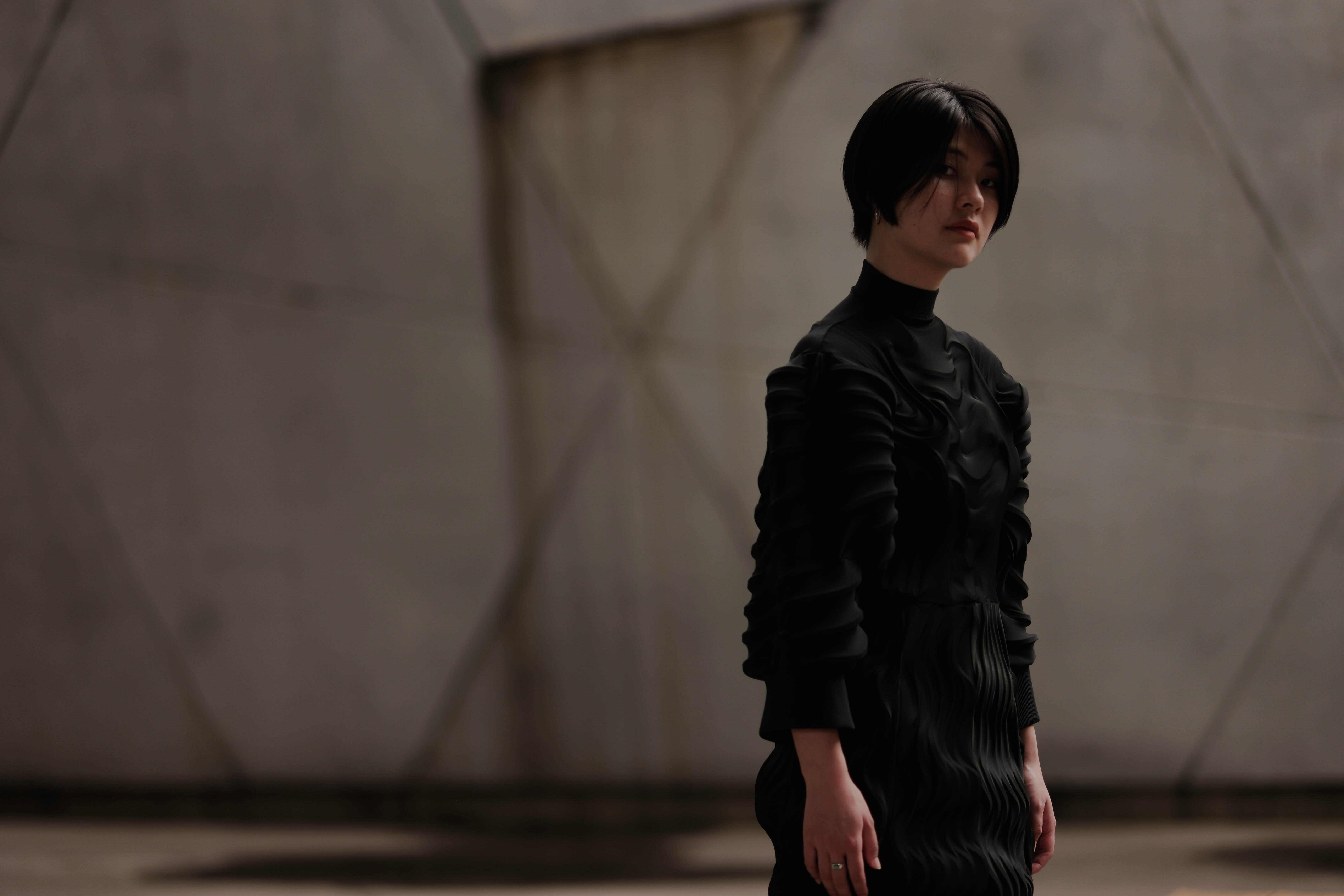 If I could resume in one word, tutorial it is. The software we used to create parametric 3d designs was Rhinoceros and Grasshopper (meta software, running inside Rhino). It is usually a hard but stip learning curve to really understand how to use a new software and specially when this software is a mix of complex maths and programming concepts. However there is no reason to get desperated (well, not yet), it was possible in a week to get the basic concepts and for sure absorb suficient knowledge to move forward by myself from here.

I use the Rhino version 6.0 for Mac. Which comes with Grasshopper inside already, but using it on Mac has shown some limitations with plug-ins that only runs in windows version.

I've started using Rhino on the week 2 to cut off the arms and legs of the body I created. But was really on week 3, with the circular fashion modules assignment that I went a bit further in the tool, learning how to create basic shapes, copy, move, mirror and some other basic commands that made starting with Grasshopper a bit easier. In my documentation you can find this tutorial with the explanation on what I knew so far.

So this means that with very very basic knowledge of Rhino, you are good to go exploring Grasshopper.

Hello wiki definition again : Grasshopper is a visual programming language and environment that runs within the Rhinoceros 3D computer-aided design (CAD) application. Programs are created by dragging components onto a canvas. The outputs to these components are then connected to the inputs of subsequent components.

With that in mind you need to understand that is all about logics, each component gives the other one an information to follow and this flow of information will result in a specific shape in Rhino.

Eugenio guided us from the basics, here follows some of the screenshots of what we learned:

Every component has an input and output, if the component is yellow, it means there is no data inside. When green, is referenced geometry and red, the is some error. 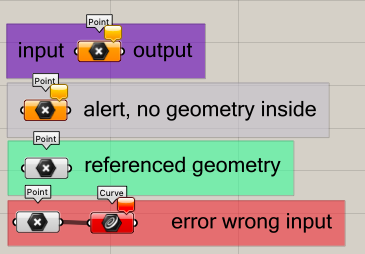 Is very easy to create grids in GH, you can use some of the basic ones provided and play with it 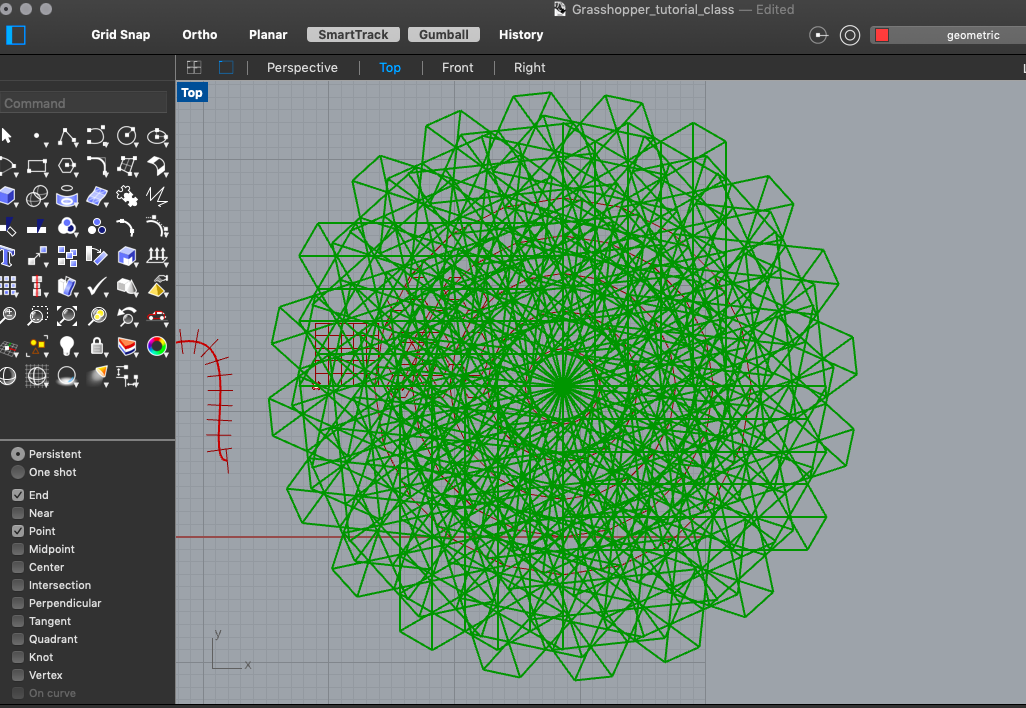 We learnd some extra components in GH with Eugenio and also I did some extra tutorials by myself, mainly via Parametric House and also some other youtube videos.

I got fascinated by the auxetic pattern examples that were shared with us, so then decided to test them. I found a very usefull explanation here. Following this file, I managed to replicate the components and also play with some variations. 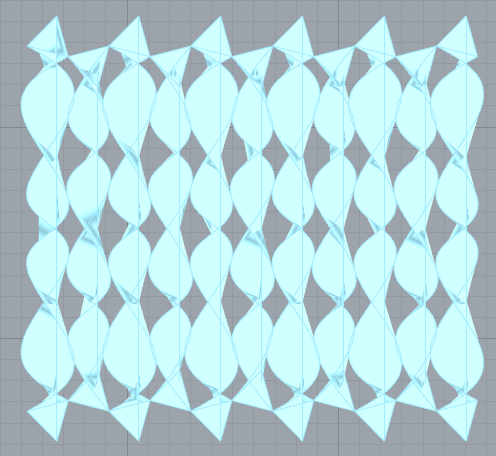 Printscreen of an error that I found very pretty!!

*can do some edit, turn, crop

A. Layers and perimeters > usually don’t change much of the setting inside the menu

horizontal shells > bottom and top layers, horizontally to the bed

B. Infill > the inside part of your shape - you can change the density and the pattern

skirt, is a first layer but doesn’t touch your object, is more like a test layer

brim, is touching the object and can easily be cutted out. If you wanna make sure that the object is attached to the bed and giving support for the print

D. Support material > here is the specific settings from the Support settings on the main page (so if it changes here also changes there and vice-versa)

The message Pre heating comes up

Cut the edge of your filament

You can remove the “tube/straw” but pushing the blue part down, so you pass the filament in . Press the Buttom to start extruding > now press yes if the extruding was fine

Is heating the bed - does some calibration - and start printing

NOZZLE : is the hole where the filament is coming out

You can pause or cancel the printing

Then after the printing - press and uload the filament. Put it back in the box

Attached to the side with little tension in the fabric 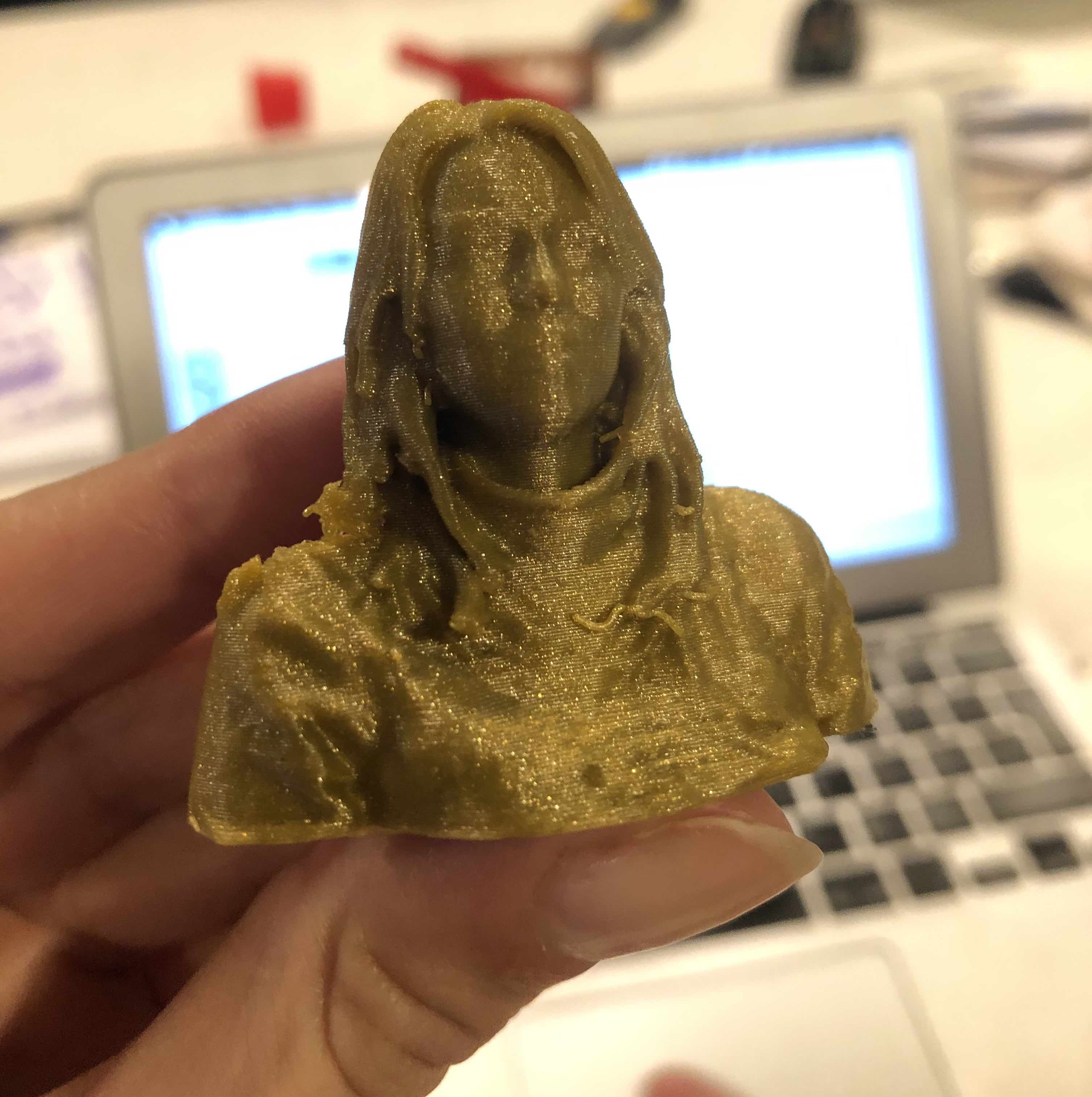 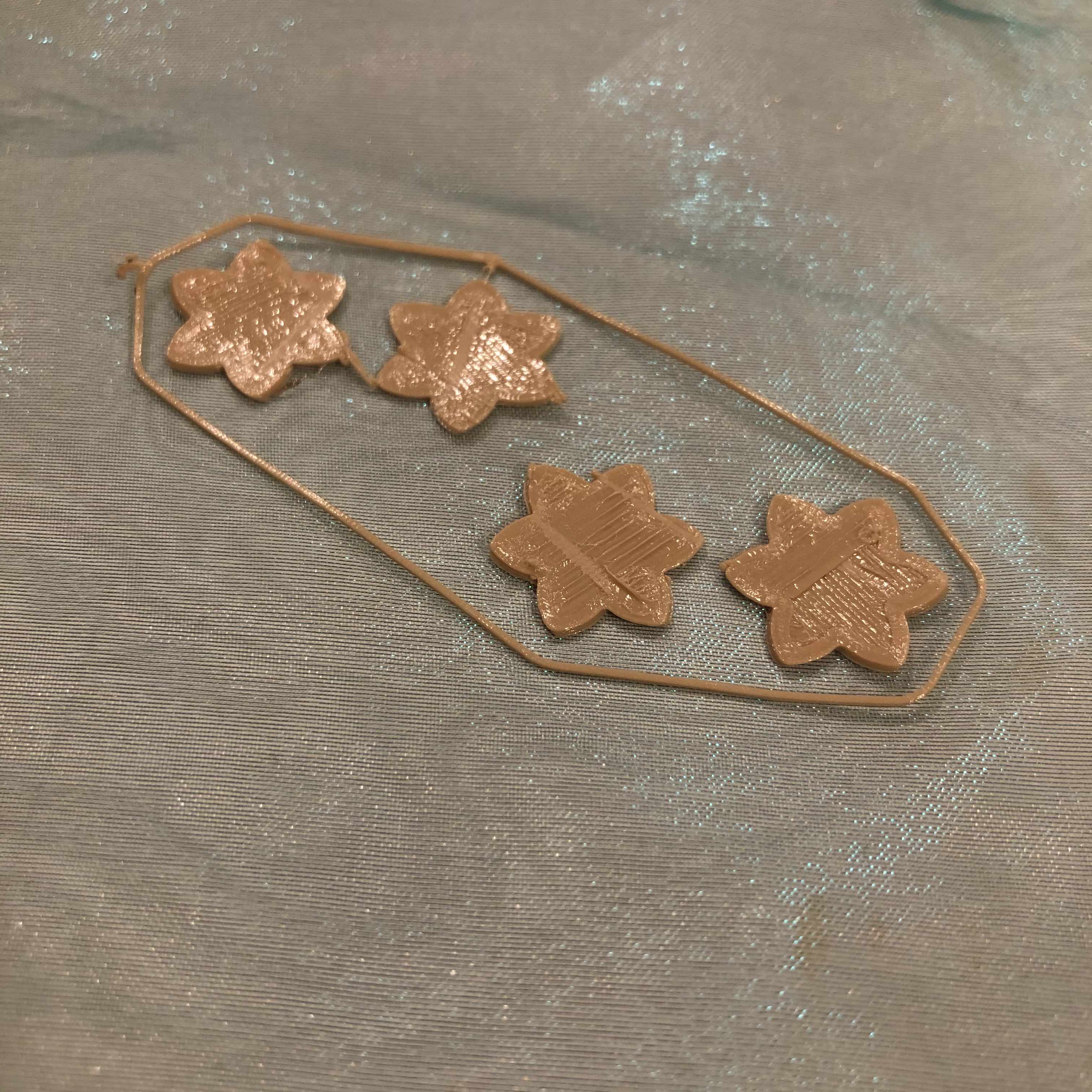 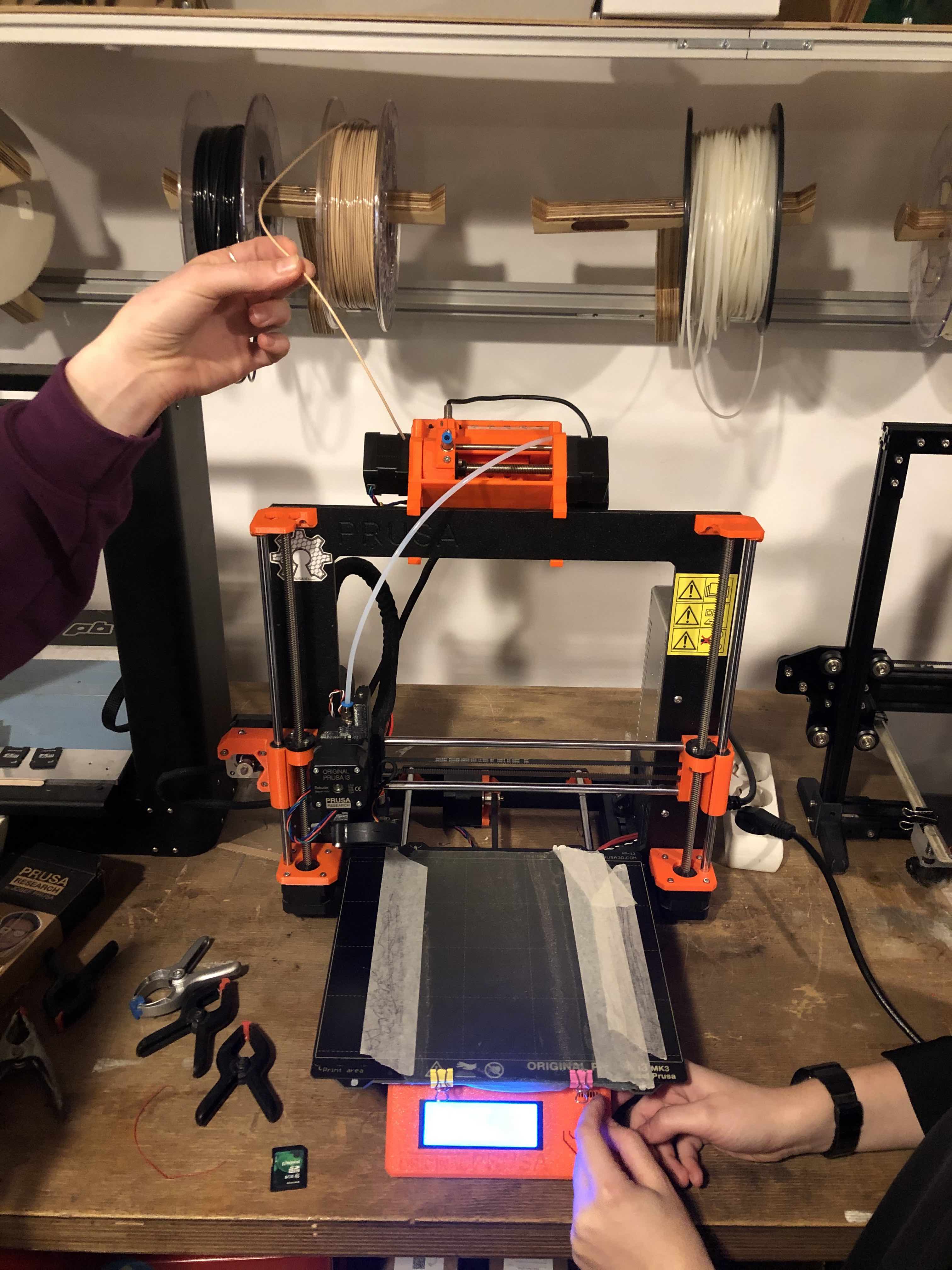 ERROR : lycra fabric got burned and pulled away

The first attempt was to print on top of a lycra fabric, I had used a special type of glue to fix it to the table. I also placed some clips to hold it.

ALERT : Since the Prusa printer is very small, the snozzle hit the clips and I had to stop the machine to prevent any damage ALERT 2 : Maybe because I didn't stretch the fabric, as the snozzle was calibrating, it started to drag my fabric away and also make holes in it 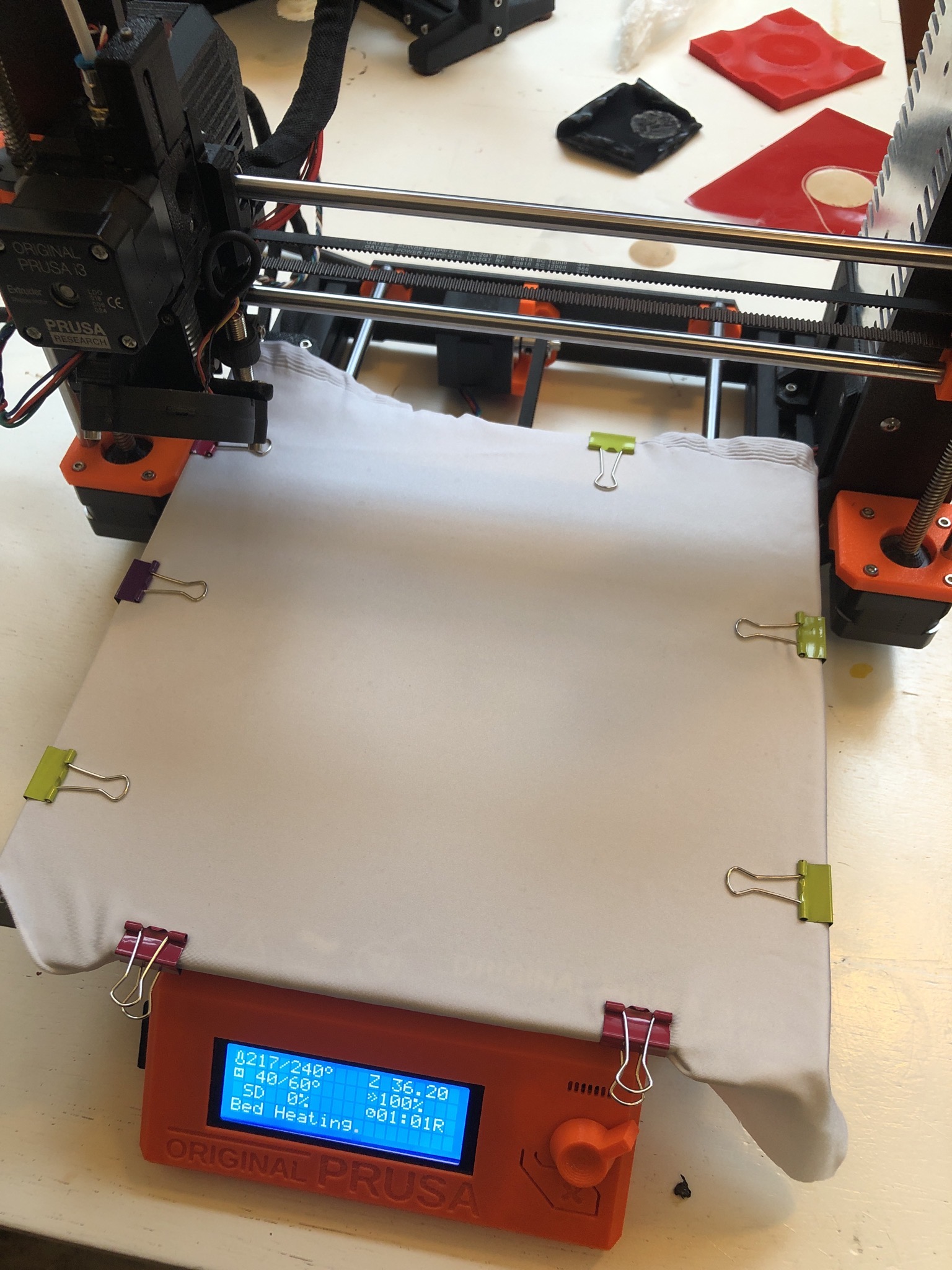 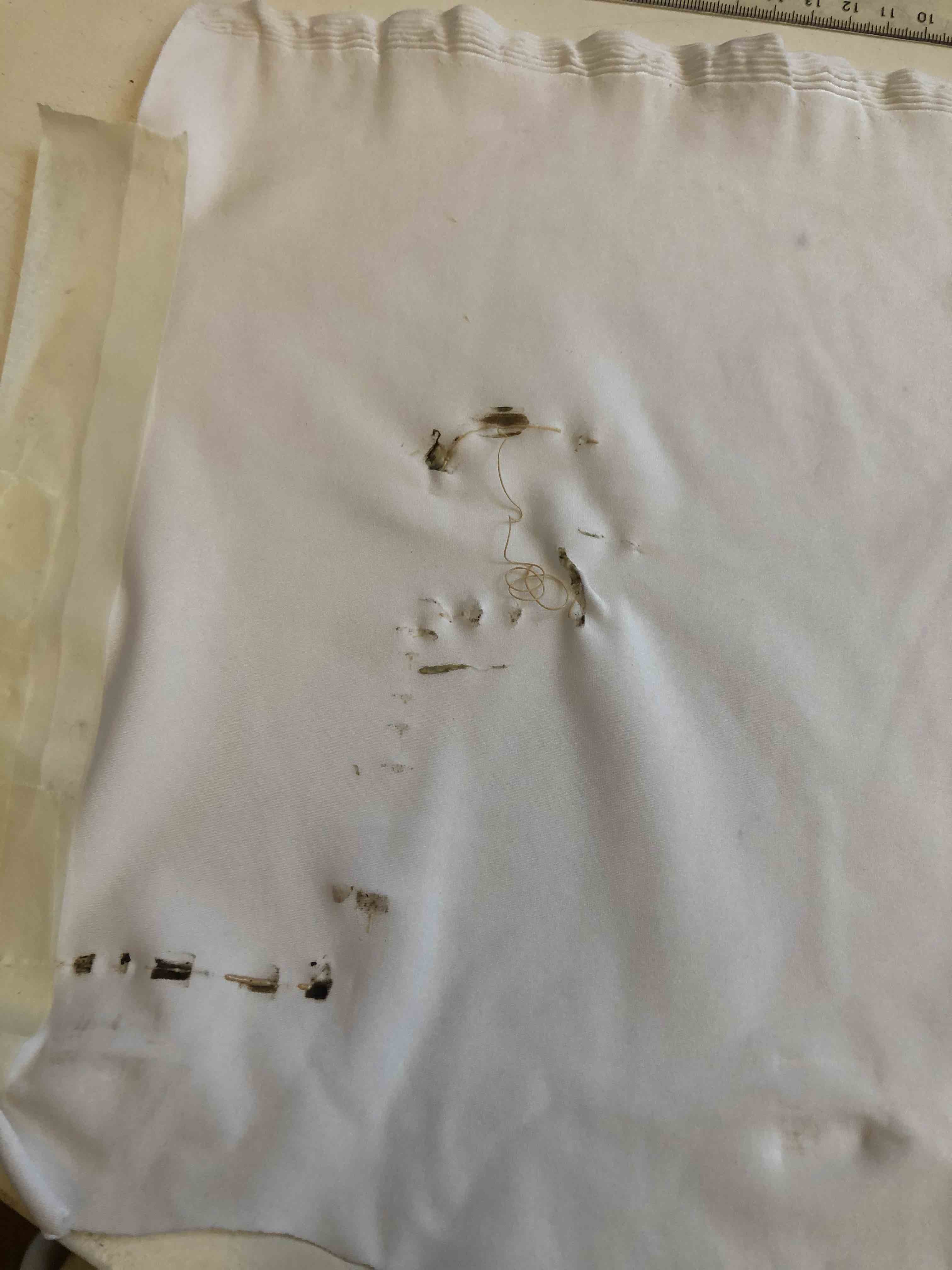 Because the fabric tests weren't very good, I decided to print directly on the bed. Also the main goal was to make the auxetic pattern "work", meaning opening and closing. Prusa Slicer settings for the first print 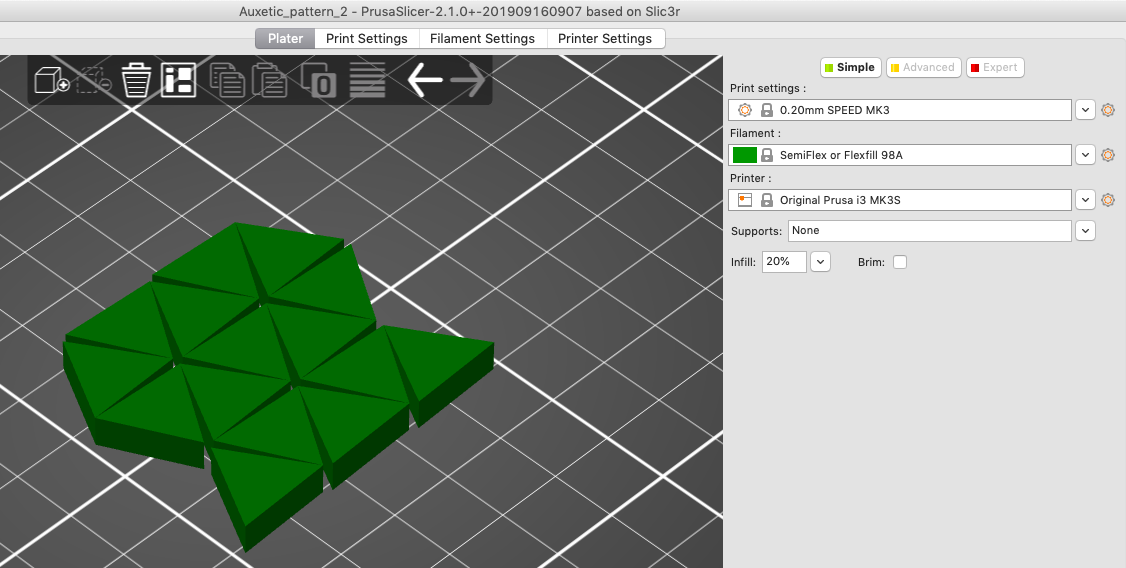 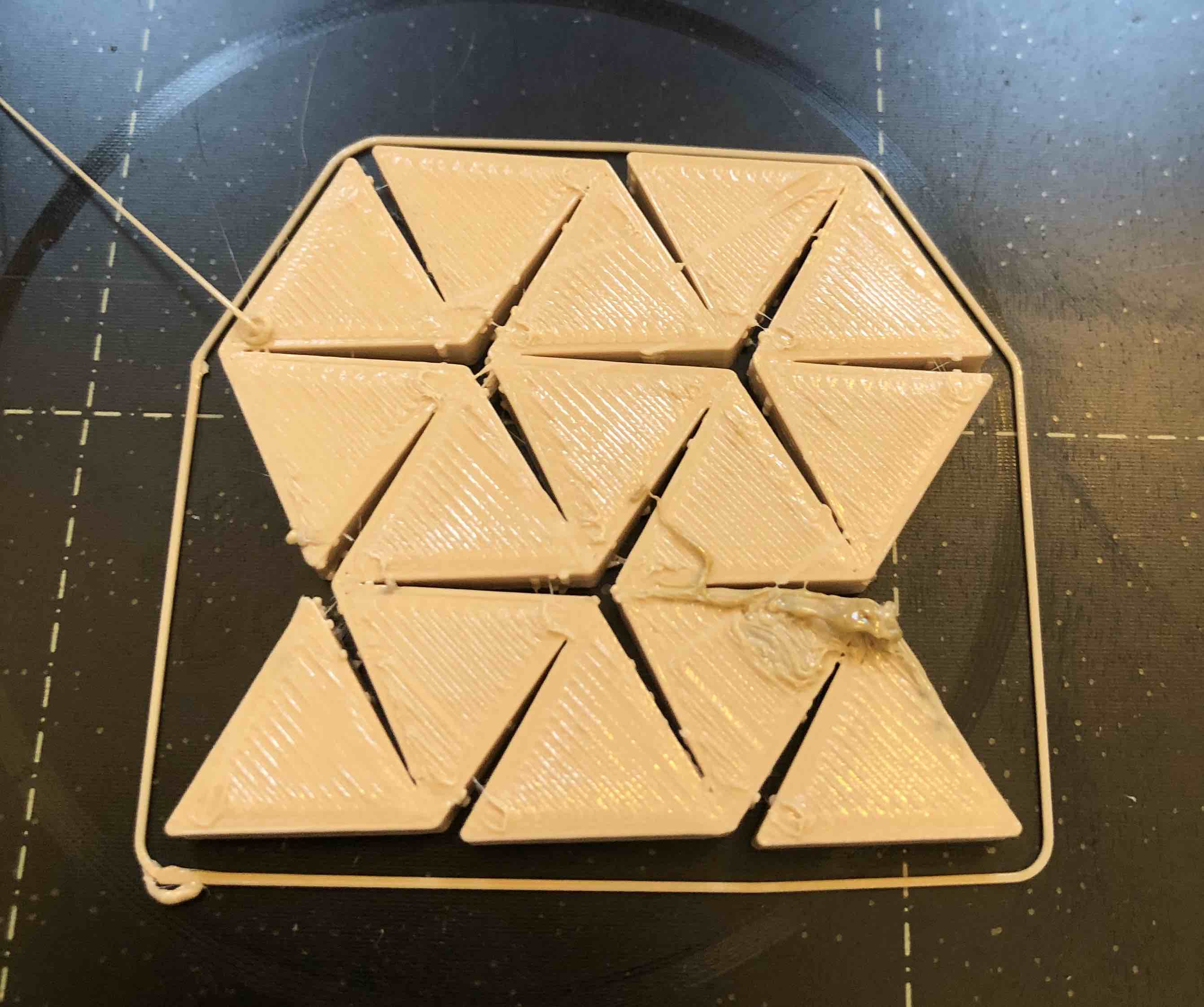 Prusa Slicer settings for the first print. I changed the settings from SPEED to DRAFT, because I wanted the estimate time to go slower.

In the end maybe because of this change (and also design change) the "walls" of my triangles are touching and therefore I cannot open and close the pattern. 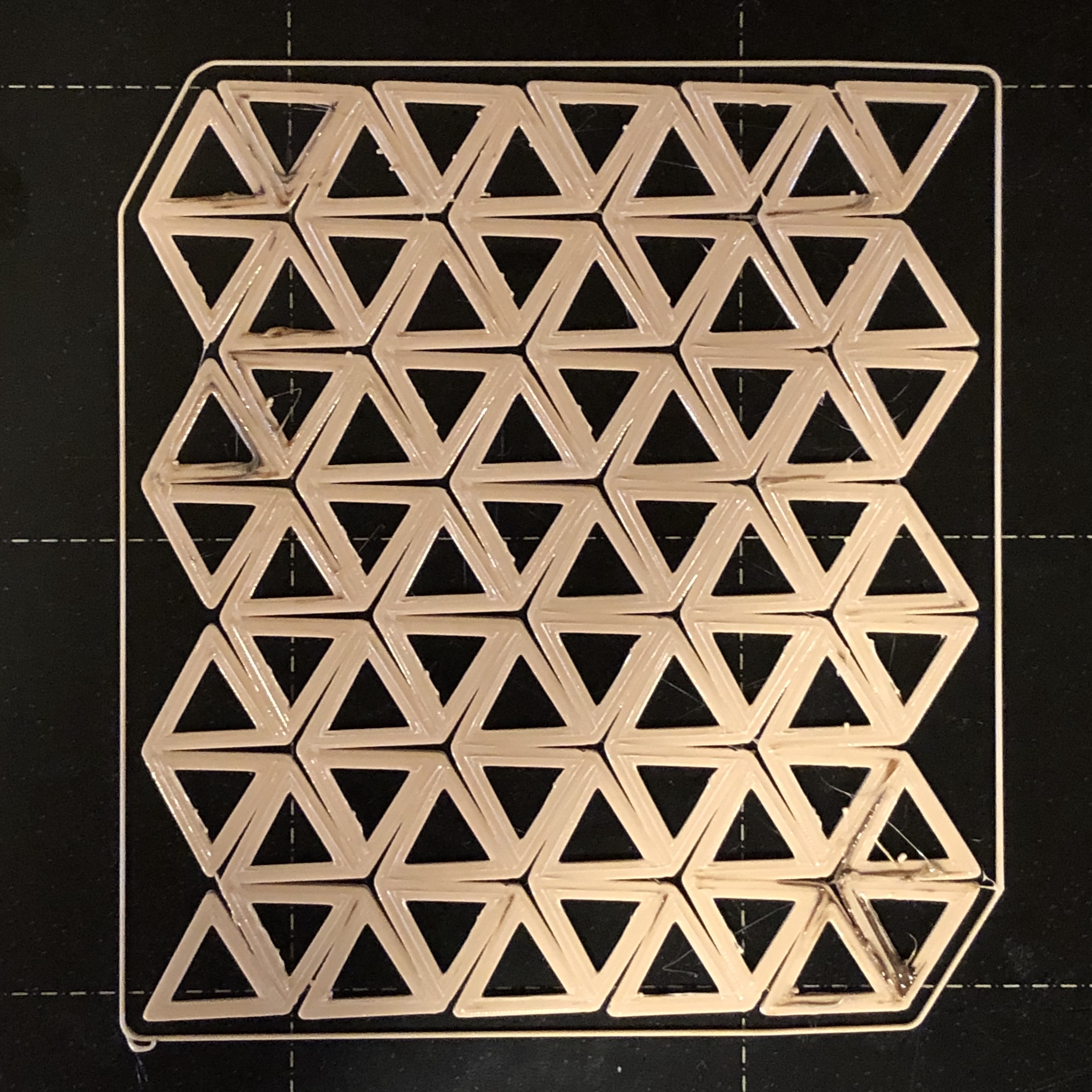 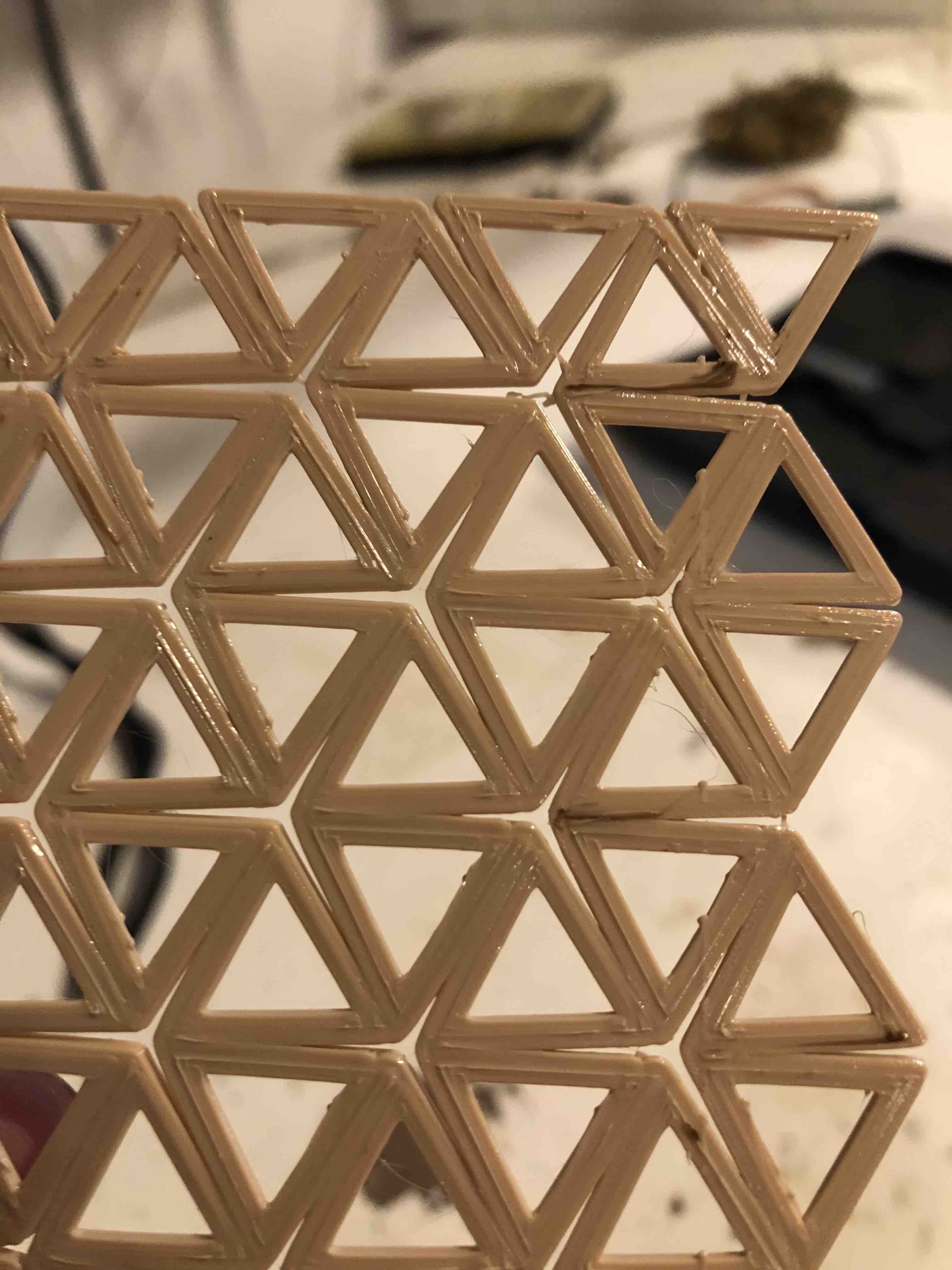