This week I prepared a 3D model of my chest.

The fablab provides a 3D sense, and I used it to scan a 3D model of my body. 3D sense is a portable scanner that can create digital 3D data.

I scanned my body with the sense 3D. The Sense software was very slow while scanning and crashed several time but I finally got a nice result of my chest.

I cleaned the 3D acquisiton because there were several mistakes (using the erase and the cut tool on the 3D sense software) and then opened it using fusion 360 software and used the Slicer fusion 360 tool.

At first, I kept the start of the arms but when I tried to make the model on the slicer there were some small pieces which would have been too fragile so I modified the file and cut the arms.

Before cutting the body slices, I made a first test with the laser cutter. It was pretty easy to use. I made a batman signal for my son ;)

I used the laser cutter Epilog Laser cutter Legend Elite Mini+, for the 4mm cardboard I used the following parameters speed : 27% and power : 85%.

On the computer, the process necessitated to open the Coreldraw software, then import the image (png) and click on draw the bitmap, vectorise the shape -> click on the image and then delete the backgroud.

Then the file was ready. For the printing, I chose the laser cut as a printer, then defined preferences with high resolution, vector, advanced and then chose the material cardboard (power 27% and speed 85%).

I cut almost every pieces and started to put everything together, the first pieces where ok but as the pieces got bigger it was really hard to put the pieces together, almost impossible. It turned out that I had made a mistake on the measurement and didn't read the cardboard thickness right: I though it was 5mm but it was 7,5 mm !

In red the wrong measure and in green the good one...

So I started again changing the thickness and cut everything a second time. It was way easier this time and here was the result :

I also had a first look on the 3D printers, and made a second batman signal haha.

The principle is to export directly from the sense scan to the Prusa Slicer in order to print the scan model.

This is the result of the body scan export on the Prusa slicer software.

I then sent it in a Prusa printer with a SD card and here was the result.

The 3D printed chest broke at the waist level when I took it off the 3D printer but I fixed it with glue.

I also tried makehuman software an open source tool to make 3D characters and tried to make the model at my image. I found it difficult to get the right measures as everything is changed by cursors.

3D printed and body scans can be used in several disciplines.

For exemple this 3D printed of a mummy called the Ice man. The mummy was found in September 1991 in the Ötztal Alps, hence the nickname "Ötzi", near Similaun mountain and Hauslabjoch on the border between Austria and Italy. It is Europe's oldest known natural human mummy, and has offered an unprecedented view of Chalcolithic (Copper Age) Europeans. His body and belongings are displayed in the South Tyrol Museum of Archaeology in Bolzano, South Tyrol, Italy.

The paleo-artist Gary Staab was invited to create an exact replica of the mummy, therefore allowing a greater number of people to learn about the five-thousand-year-old mummy. To do so, Staab took advantage of Materialise’s Mammoth SLA process, resulting in a massive 5’5″-tall printed copy of the Iceman, over which Staab sculpted skin textures and painted to render a lifelike version of the mummy.

Here is a video of the 3D mummy. 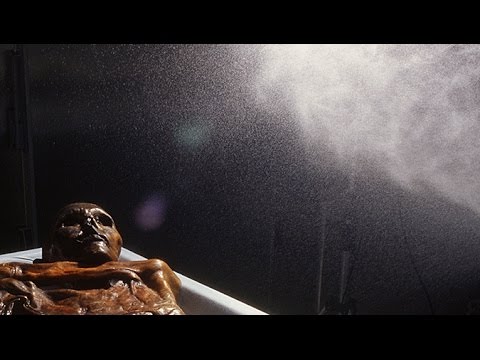 All the informations about the ULB Fablab can de found on the website Before using one of the fablab machine it's necessary to follow a training with one of the fabmanager.

As I was installing the software I found a tutorial to scan with a better definition using a file to print and to use under the scan object in order to get better results. This is a special geometric pattern which, when printed and placed under an object, can provide extra information to the scanner to help in tracking

I had several small issues this week

Fist with the image link, I had to replace /blob by /raw on the image link to get the to image (it was working last week but I changed my computer so maybe this is the cause)

Should be replaced by the shortlink