I recently found some research about Gecko tape from The Thought Emporium. With only the tip of their fingers, geckos can walk on walls and ceillings, and almost any kind of surface. Their fingers are covered by microscopic hairs called setae, and they are the secret of the very strong grip of their paws. By replicating these tiny hair, scientists developped a super strong kind of tape. In the video from Thought Emporium, they found a way to make a working prototype of gecko tape by casting sylicone on light defracting film. Light defracting film, on a microscopic level, is similar to gecko tape. I wanted to try my own prototype, and maybe acheve something that would climb walls! 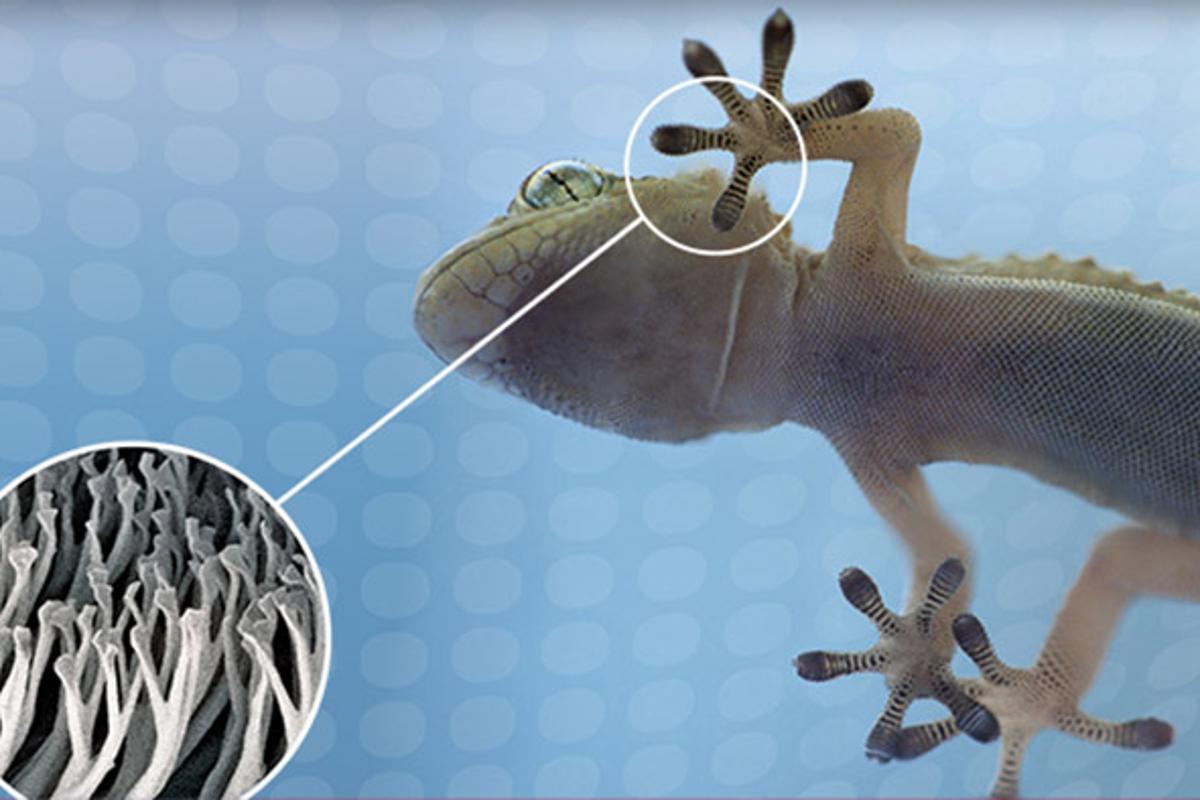 For my first prototype, I wanted to try something that would do 2 movements in one blow, so strech up, then bend to stick on the wall. I drew my prototype on adobe illustrator. To lazercut it, I had to export my drawing in .svg, open it in inkscape then change the colors to avoid any problems. I used scraps of acrylic sheets we had, and the presets of the laser cutter for it. when all my pieces were cut, I sticked the acrylic pieces together with the glue I had at home. For the sticky tip of my toe, I made a mold with a light defracting file holder I had. As the Thought Emporium pointed out, the microscopic pattern needed to defract the light is similar to the one we need to make gekko tape. Altho, My file holder might not be the ideal material and precise thing to use...

I used Ecoflex 00-20 silicone to cast my gecko toe. I first filled the two parts of my mold, then bonded the two of them together with a bit more silicone. I lost some presision there; I put too much silicone, and when I put the first part on top of the other, the extra silicone moved and filled the parts I wanted to stay empty. I sealed my component to a rigid tube with a tie wrap, plugged it to an air pump.

In my head, since I never worked with air or water pressure before, I tought the air would fill my shape in a previsible and even way. I tought it would fill the biggest space (or the spaces with the thinest walls) and then fill slowly the rest. When I filled it with air, I was surprised to see that the pressure only gets stuck to one place: the first biggest space it could find (at least in my case, since my empty spaces were so big). It makes a lot more sense than what I initially tought, but sadly I only had the time for one prototype.

My silicone gecko tape was not as sucessful as the prototype on youtube. It might be because first my defracting film could have ben coated with something, I have no way to be sure that is was ideal for this experiment on a microscopic level. Second, it might be because my silicone wasn't as stiff as theirs.

I did not acheve something fancy and good looking at all, but when trown with enough energy it can stick to windows!

After this first prototype, I made some changes. I added some stiff silicone (Ecoflex - Dragonskin) to one side of the toe for it to bend on one side. So the air would reach the tip, I wraped the tube with non streatch thread, in this case a fishline.

I made different versions of the contracting muscle. First, the one with a hard cardboard skelleton inside. I prepared different sizes of the same model, to see how the scale affects the contraction.
The cardboard structure was made by hand, and I sealed it inside a soft plastic bag. The thermal heater at the lab was pretty easy to use, and I sealed the bag a little too small so the cardboard would stay a bit folded. To seal the bag to a tube, I used some scraps of silicone from my prototype of earlier, wrapped a sample of it around the tube, added the plastic bag and tightened everything together with tie wraps. My homemade silicone seal was pretty effective! The results were remarkably strong! The scale didin't affect the strength of the muscle, and I regret not trying even smaller. The fancy shape is an origami design I wanted to try. It was based ou of a square, and when completely folded, made a smaller square. the hardest part was to make the seal just a bit too small, so the origami would fold, and not just flatten when we suck the air out. My prototype worked, but after seeing it in action... I still can't find any use to it! But it's nice to see that most origami design could work.


For the silicone atificial muscle, I used Echoflex 00-20 silicone using a pen as a mold. It got messy pretty quickly, but it worked perfectly for a short sample. The black material is a braided sleeve, usually used to cover cables. When I tied them together, I made sure that the silicone was longer than the sleeve, so the muscle would widen and shorten as it inflates.

I had a bit more time to experiment with vinyls.

This is an open source project. Feel free to use all the files you need!