1. STATE OF THE ART, PROJECT MANAGEMENT AND DOCUMENTATION¶

This week has been all about three main focuses:

Discovering the wonders and depths of Fabricademy and it's environment¶

For the two first days of the course me and the other students in Barcelona were introduced to Fabricademy and its details as well as to the whole environment of the Fab Labs and what it's methodologies and objetives are.

When comes to Fabricademy itself we were taught on our first class (available in classes.week01 under What is Fabricademy), a lot about what actually led Anastasia, Cecilia and Fiore to generate this textile academy that approaches Fabrics with a rather technological mindset. It was lovely to be able to hear them three speaking of how relevant a change in the entire production process of fabric is needed, quite knowngly as the textile industry is the second most polluting one. They followed to in fact expose to the students what develops have already been made, at a lest a few of these. and they outlined that the aim of the course is to really teach us what techniques we have available, meaning what technology we can use in order to affect change in the system. They remind us that truly the processes we are faced with, of mass production and segmented lines of making are really quite new, and should not be taken as laws, they should in fact be questioned. And it is our place to question them, and this time, while developing new techniques and using new developments always keep in mind how those will afect the environment and humankind. It a great kickoff really to the following intense process that awaits us in the next few weeks.

Also we were faced with the idea, shared by fabricademy, of the Fab Labs. Originated by Neil Gershenfeld in MIT, the concept of the fab labs, to spread laboratory where one could basically make whatever they wanted and establish them locally wherever they were in order for that fabrication to be self sufficient in a local scale. The idea is to eventually exempt the world from logistics of transportation and focus on a data in data out process, sent from lab to lab, and redeveloped and reinvented locally based on availability of founding elements. We were faced with ongoing and developing initiatives such as Fab City and Smart Citizen that are the beggining of the change needed for production to move from what it is into the model sugested by the founder and director of MIT's Center for Bits and Atoms (CBA).

It all feels as if I were in the right place learning the right, necessary methodology to help (to my ability) to make the more than needed change in fabrication, making, prodcution paradigms.

Gettting along with GitLab and its little tricks¶

When it comes to my getting to know GitLab and GitLab getting to know me we've pretty much gotten along in terms of content but definitely disagree in all matters visual.

In order to start my content adding journey I first studied a bit the material that Fiore had given us all in the course through this link as well as read some of what the keys in coding were, especially the ones mainly used in GitLab through its cheatsheet. I followed to start adding some text about me on the home page and in this very page. I, then started obsessing a bit about the looks of it all, which I'll get into further detail in the next paragraph. After defining this look you can see in the image below (hopefully by the end of the course I'll have learned a little more of coding and gotten further acquainted to its secrets and tricks and will be able to tweak this first version), I started adding images and videos to the pages, as well as making sure that the links I added were in fact working, since some of them weren't. Some tips about these are: 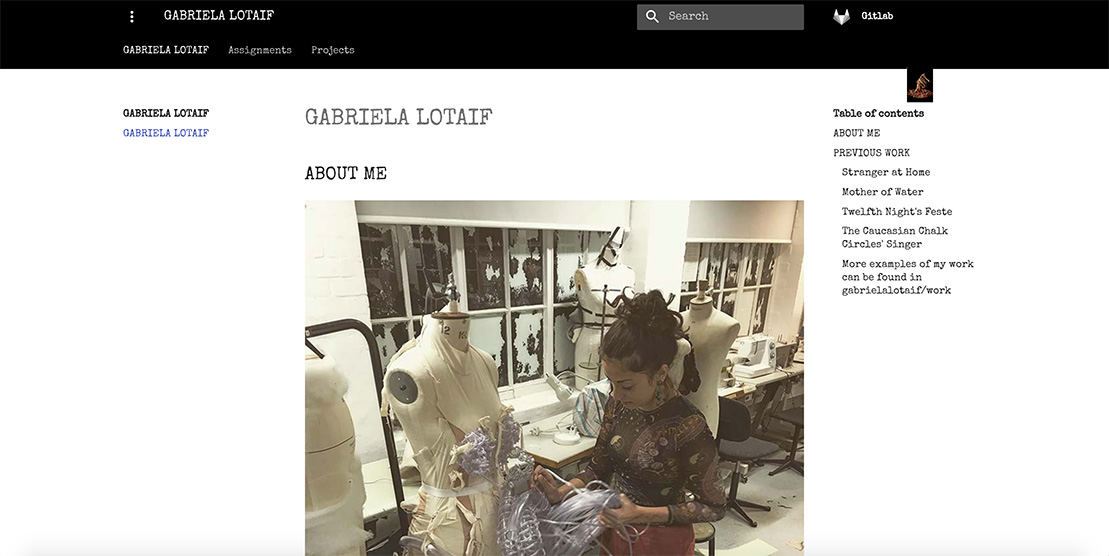 As you can see on the image above I pretty much managed to make my Fabricademy page quite aligned with the aesthetics of my personal website. I did, however have a hard time actually figuring out how to change the template, and informing myself on pages from Fabricademy earlier editions participants, trying to learn their very professional programming techniques...

When I first started dealing with the mkdocs directory I thought to myself it wasn't all that difficult. i used Fiore's image 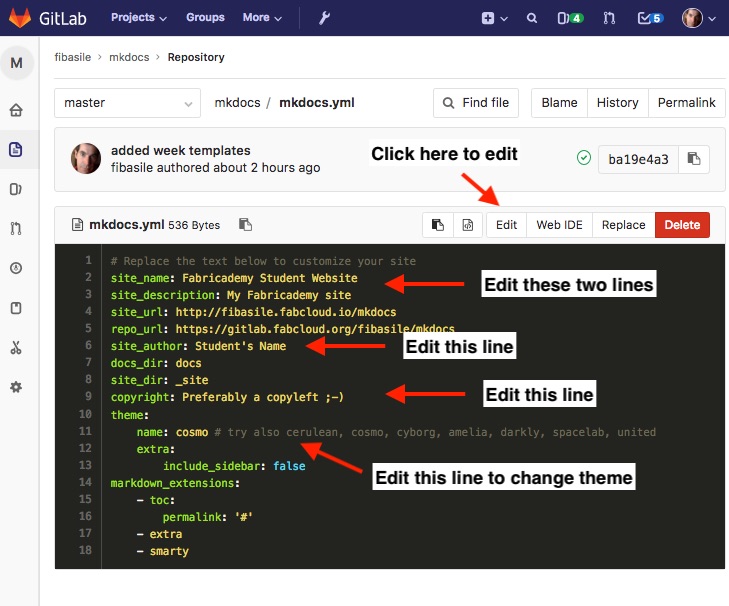 on what to change and what not to change as a guide and did pretty well when it came to changing the name on the top of the page and even linked my social media to the page quite organically, only copying the addresses to my social media and pasting it on the (previously existant) spaces that are reserved for them. I just added a facebook link to my facebook page (for which I copied the coding for instagra, changed the name and link and it worked) and took off the twitter one (literally highlighted its code and clicked delete), that was there already.

And then came the difficulty, I wanted to change the theme from material to cosmo or cerulean as it appeared on Fiore's example to be possible. The issue is that the theme "material" has actually a setup of its own and cannot be changed. After trying several times writing the coding differently I emailed Fiore and he answered me saying that in fact I couldn't change it, but that I could edit it based on this link. I followed to edit the page doing things step by step: 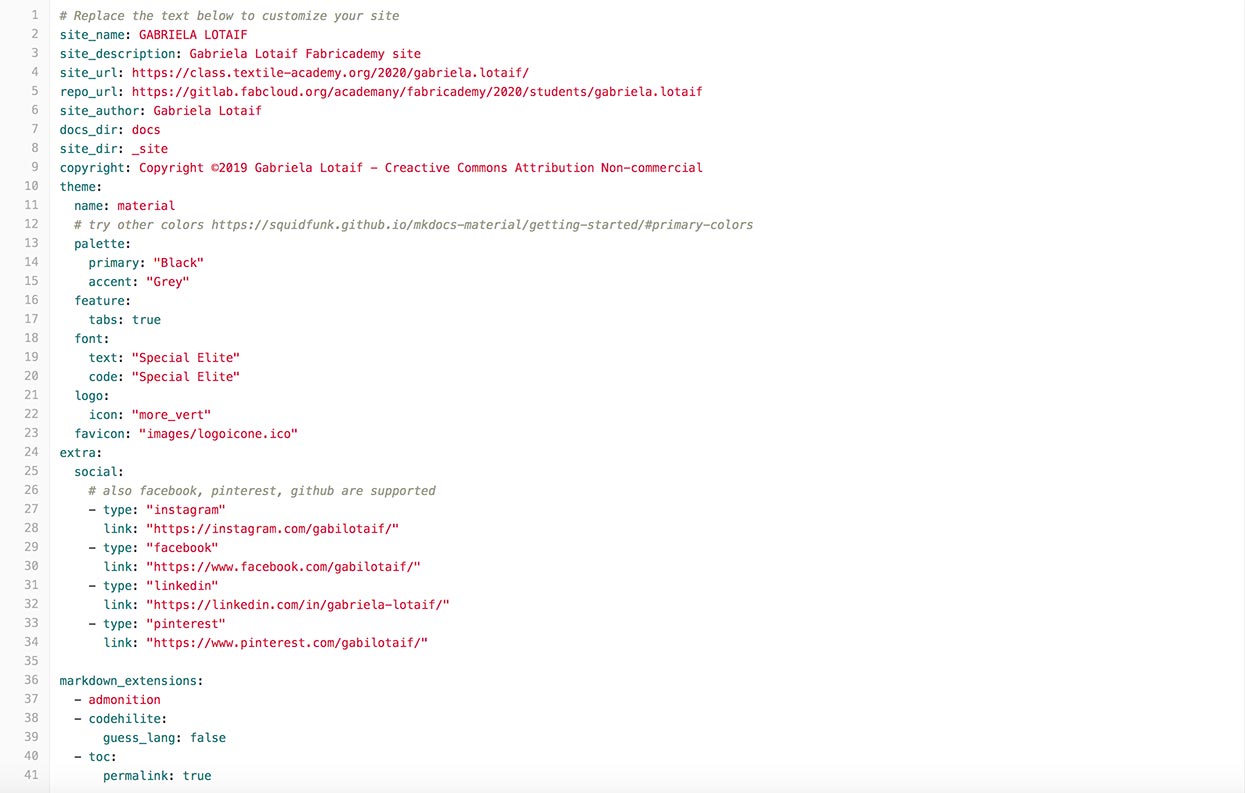 Concretizing my expectations of Fabricademy and sketching my final project¶

My ideia when I joined Fabricademy was to learn all the different techniques the course proposes and be able to engage with my personal production with these new methodologies I would acquire during the first three months. I have, as I mentioned on the home page, very shyly started experimenting with creative tech and digital fabrication and this grew a curiosity within me to learn the possibilities I had in order to apply technology onto my practice. I work mainly with costume performance, as you've been able to see as well on the home page, but textile has always been on my mind through my professional development. I've decided to enter the world of fashion and later costume because of how keen I was on weaving i general and all its techniques. Being able to apply to this interest of mine new ways of thinking and new forms of creating textile and textile products through technology is my main aim in Fabricademy. I have also great interest in nature and its stories.

Of course as a performance enthusiast I am deeply connected to whatever story anything can tell and how this story telling happens. My approach to sustainability is, thus, a rather narrative-like one. Keeping in mind how relevant nature is and its power and manitude I am more and more pushed to making whatever product I fabricate in a way that proves my care and respect towards nature. I have already been trying my hardest to communicate Brazilian popular culture based on nature and rituals that relates to natural elements with my costume performances, but I wanted to be able to engange with sustainable and natural material even through the making of these garments, which I lack the knowledge for, another need of mine that I hope will start being satisfied during Fabricademy.

Some objects of my couriosity in terms of what techniques were used to make the objects and what the digital fabrication approach to these were:

Ying Gao's productions i general, that can be seen on her vimeo page, such as neutralité : can’t and won’t.

And so many other ones, such as most of Fabricademy previous students'...

I understand that it will make my learning process easier at moments of the course to establish an aim to whatever production I have on that particular weekly subject. I also see that it will be helpful to keep in mind my final project idea in order to develop it, change it, mould it on the course of the technique learning 3 month period. My objetcive is to create, origanically, the Fabricademy project as the weeks go and as through each of them I circle around my theme using the newly learned mothodology of the week. Soo my final project very early idea is sketched below:

Again as seen in the home page a rather clear line to my creations is that I take inspiration on Brazilian Popular Culture and try to transform what I know about its figures, rituals, parties and themes into a performance piece that somhow disseminates my perception of it; that it is a rich culture, filled with connections to all different cultures that were added to the original Brazilian during the country's population process and that is very little seen outside the country. Even Brazilians in general have shamefully low knowledge of the culture. They would excuse themselves saying the country is massive and that popular culture cannot be obtained through reading or watching fims, which is partially true, but one of my many intentions with my work is to shout out as highly as I can and maybe try to start documenting my culture in a rather accessible way to the eyes of those who don't live it, don't practice it.

That said, I have an uncountable amount of themes to work from, originating out of Brazilian Popular Culture. I have chosen for now to work with whatever relates to the moon, and more importantly to a female idea of moon that is very typical of Brazilian culture. This means that i need yet top define what in Brazilian Folklore I'll use as a subject, there are figures whose narratives run around the moon as Jaci, Vitória Régia, Onça Celeste in native Brazilian mythology. There are certain types of rituals in Candomblé and in certain native Brazilian tribes that are only done under the moon, such as the moon web. There are many other options to chose from, which I assume will become easier as time goes by during these first three months.

In my field it is common to chose from a theme, a story, a character even, whichever gives the creator a narrative and follow with creative processes from then on. I believe that relating my production to the theme of the moon and certain Brazilian Folkloric tales and figures that have it as a main subject will allow me to guide my experimentation based on several aspects that this theme allows as for instance:

Theses three are examples of Brazilian sayings and proverbs about the moon, they have always to do with the rest of the natural elements and are also very often metaphors for human behaviour.

I tend to base my reasearch on rather unusual sources in the academic meaning of Bibliography, mainly because a lot of care has to be taken and a lot of consideration made while referring to some fon about popular culture, as this is a culture mainly shared through storytelling and actual experiences. I do have a few sources I trust about this and many other interesting topics to me, both when it comes to exploring the spiritualism within Brazilian Popular Culture and when it comes to theme of the moon reflected as female:

I'm not yet too sure of what I would work this theme towards and how in order to make it a costume performance, but I am hoping to find my way around it using fabricademy's techniques-to-learn!