My idea regarding the Bioflaskin was origanlly to in fact have bags similarly to placentas spread out in the body and connect them via a tube made of their same material, that would resemble the umbellical chord. This is the reason why I started developping a research on methodologies of extruding an alginate tube, which the guidance of Anastasia's and Cecilia's. They both suggested two very different techniques for extruding the alginate in the shape of a contiuous tube with a hole in the middle where liquid could flow throgh to get from "placenta A" to "placenta B" and result in a mechanism of movement of my garment via being touched.

Anastasia suggested I tried using soul made of metal wire wrapped around a quite sinthetic yarn. I would then dip this soul in alginate and wrap it with a thick paper that I then sprayed with calcium chloride to let it dry in there.

There was even another failed attempt in the process, suggested by @ana.correa, for which I used a previously made alginate sheet, cut out a rectangle from that, scratched the edges with a paper knife, trying to remove the calcium chloride membrane from its longer sides. I then sew these sides together and used some of that origina alginate mix to try to glue those two sides making a water tight role, but that was not the result obtained. 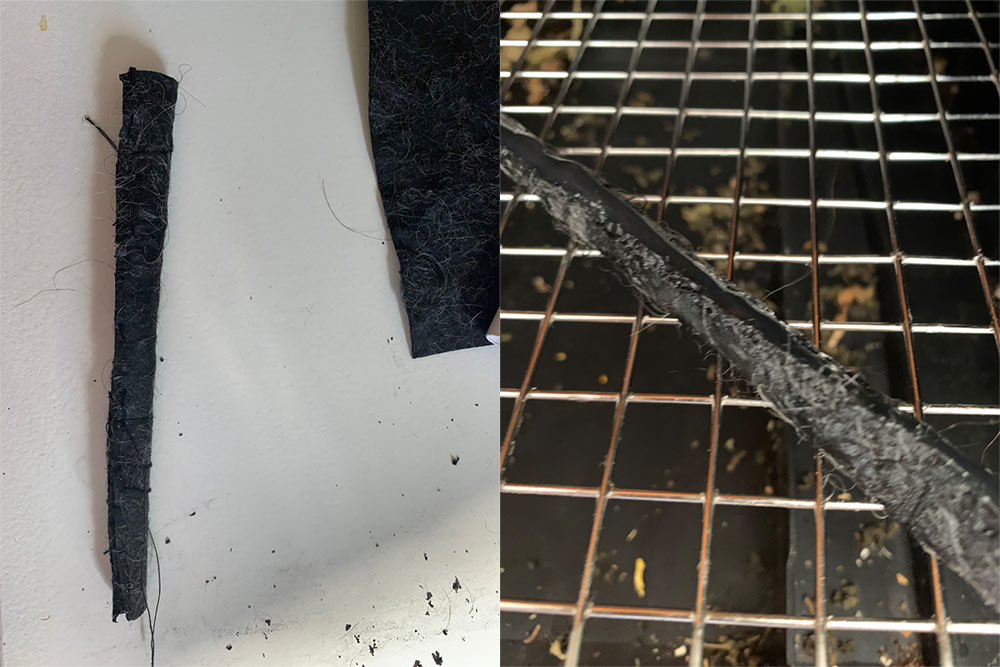 I made this first sering trying to just have a solid inside that should supposedly work similarly to a a bucatini making machine when I extruded the alginate onto a calcium chloride bowl.

This is the machine that I used as an example to my seringe's modelling:

I then 3D modelled it on Rhino:

I made a point of modelling it based on the size of the real reinge we had at Fab Lab BCN in order to not need to print out the pusher and rather just used the one from that original regular seringe, since it already had a silicone piece in it. 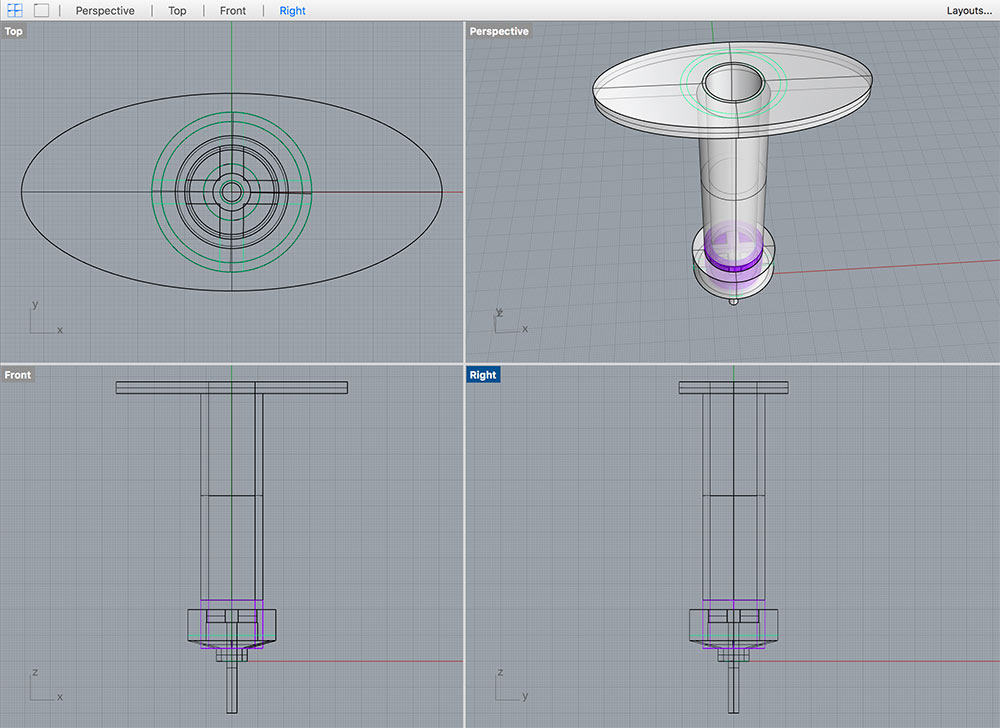 Cura settings for body of tube extruding seringe from Gabriela Lotaif on Vimeo.

This is How it looked:

And this is me using it, clearly failing:

When I failed first I though it might be the fact that I was extruding vertically and gravity was against me in the process, so I tried to mix it up with Anastasia's suggestion of method and extrude horizontally in a thick paper on the outside dipped on calcium chloride. That also didn't work:

What I did not consider in the case of this first seringe that was resposible for the biggest issue I had trying to extrude tube from it is that the alginate calcifies a membrane as soon as it touches the calcium chloride, and since the liquid was much more abundant on the outside of the "tube extractor" in comparison to its inside, the alginate solidified as in a sort of ball shape as you could see in the video above. Also, I thought, that the hole inside my tube was too small and the more I tried to extract the least able the calcium chloride would be to sneak inside that very long hole inside it even if the extraction functioned well on the outside. That would wind up in the tube closing from the inside and in fact becoming a yarn (as the one developed last year by @catherine.euale).

Considering the reasons that I was able to identify from my trying out with the first seringe, I decided to model a second version of it. This version was much bigger (and also easier to clean), which also made me need to print out its pusher as well, not only the body of the seringe. I added a hole inside the hole extruding bit of it through where I planned on pushing the soul I had been testing out with Anastasia's suggestion of technique, having dipped the synthetic yarn in calcium chloride, making sure that the centre of my tube would not close up. I also was planning on no longer extruding in the calcium chloride bowl anymore, as gravity was very unhelpful and once the liquid-extruded one dried it very often had weak spots. I wanted to, again, try out extruding in a thick paper in order to roll that around it after. 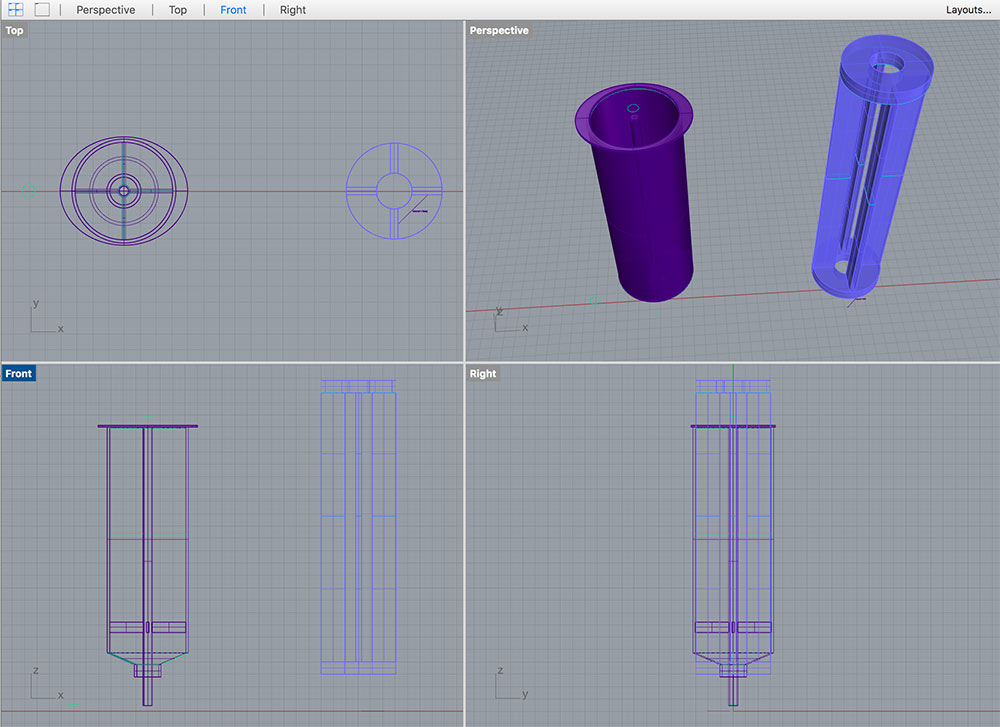 The cura settings for this seringe were all the same as the first, except for these details: 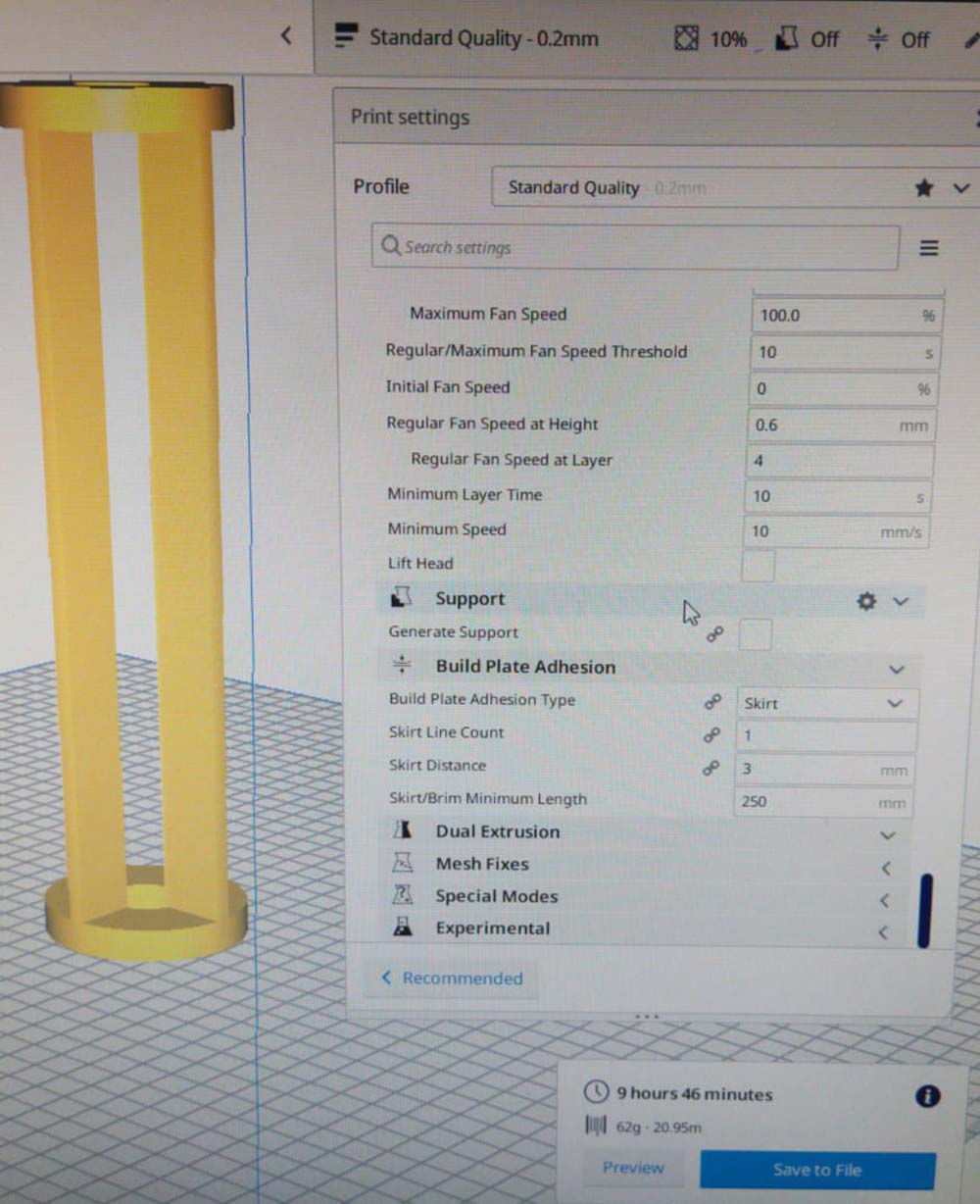 I had to dremell the base of the seringe, which I accidentally modelled closed.

This is how it looked:

And this is me using it, yet again failing:

Once more the seringe try-out failed. It proved to be very difficult to manage such a big amount of alginate being extracted onto such a frail initial calcified membrane that the calcium chloride sprayed on the paper allowed my tube. It was also impossible to extrude vertically and obtain any result different from a huge ball of alginate, or many sort of together (which actually formed a quite cool texture, but not what I wanted to achieve at the moment). Even trying to extrude with this seringe in a 45º angle onto a calcium chloride bowl I failed as the soul I was pushing inside my alginate would breake the membrane on top of this and open my not-yet-dry tube experiment.

This led me to deciding that only making this seringe work properly and achieving the result of a proper alginate tube with it would have had to be become my projec at the pace I was advancing, so I sadly had to give up this part of my research in order to focus on other developments.

I had not yet, however, completely given up on making my alginate tube. In the meantime of modelling, printing and trying out the seringes, I was also advancing with my research on the methodology suggested by Anastasia.

Metal Wire and Yarn Soul + Cardboard paper on the outside¶

The most successful technique turned out to be the one suggested by Anastasia in fact.

I prepared a soul of a 2 mm thick metal wire wrapped with an aprox. 2mm thick synthetic yarn, with both ends of the yarn held on to the metal with masking tape. I then sprayed calcium chloride on this yarn and placed it on top of a cardboard paper. I poured alginate on the paper, making sure to lift the soul when first doing it, and then replacing it back down during the process. I then wrapped around the alginate with the cardboard paper and spray its outside with calcium chloride.

My first try I did with the help of @lucrecia.strano and this one was a huge failure mainly because I used regular paper for it. after this it was only cardboard paper, either flat or wavy.

Tube making with soul inside from Gabriela Lotaif on Vimeo.

What I observed was:

These are some of my try-outs and many of the failed attempts I had to overcome:

This is my first actually tube shaoed result, but it was very thin once dry: 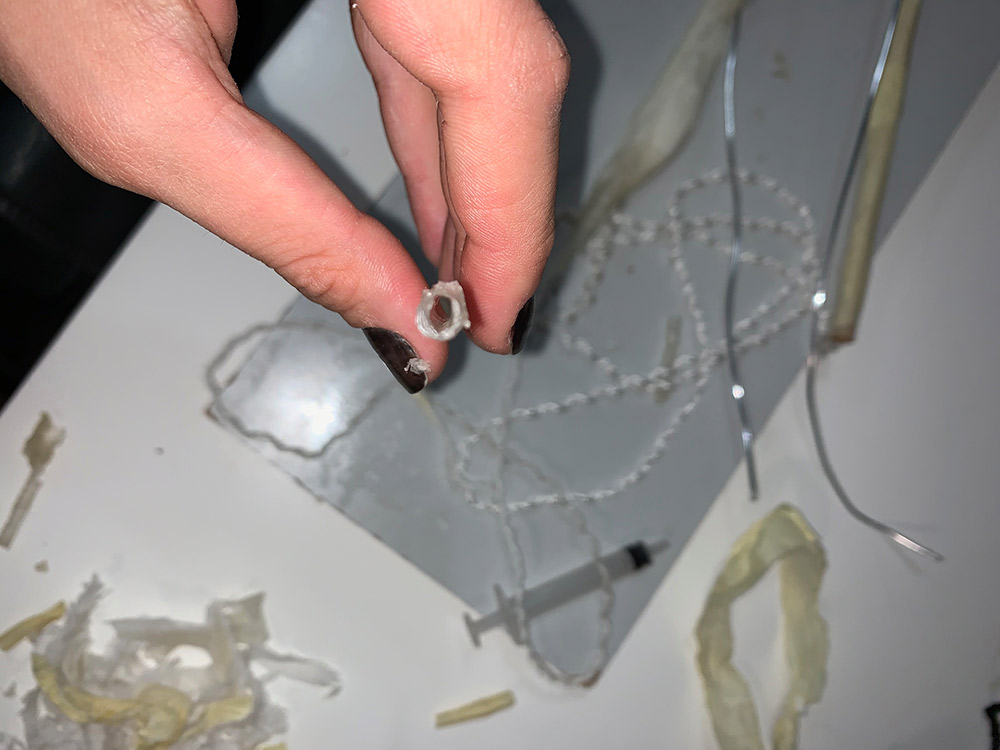 My final and most successful attempt, made by me and Anastasia together, was made following these steps:

This is it before drying: 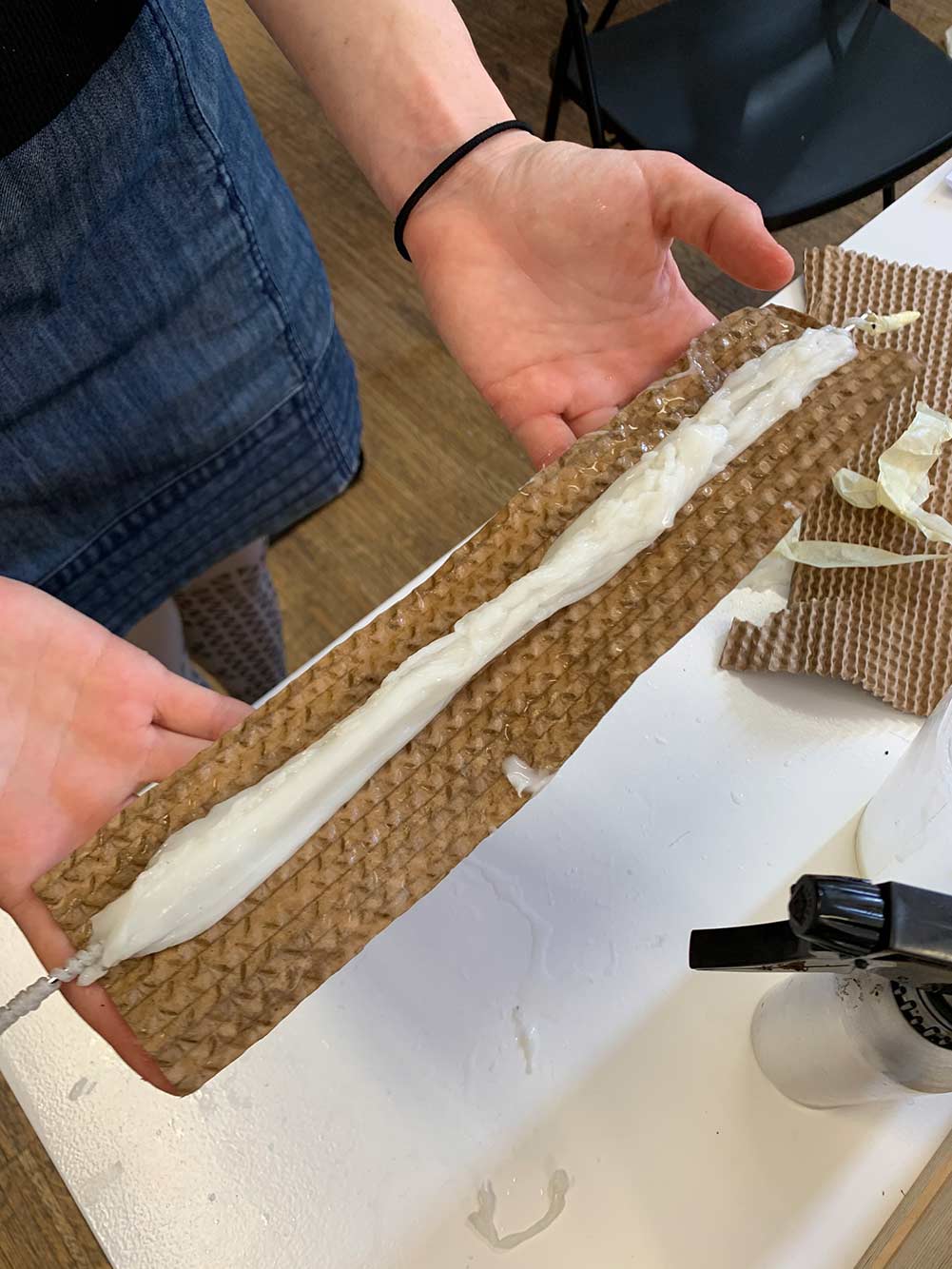 This is how it looked with water passing through it once dry:

Water passing through alginate tube from Gabriela Lotaif on Vimeo.

It's clearly not the most perfect sample of a tube, but I like the texture it got from the wavy paper wrapped around it, that somehow reminded me of the veins that sometimes pop out of people's skin when very dilated.

This methodology was still not too secure for me to use on the building of my Bioflaskin mechanics and I couldn't think of a way to pull out the soul from the tube considering that I would ultimately want to make them at the same time as the "placentas" it was to unite.

Thus, I decided to not continue with my research on the veinginate making in order to have enough time to in fact deliver a final performance piece by the time Fabricademy were over.