“Shaved” by Bart Hess - NOWNESS from NOWNESS on Vimeo.

The image generated by the wax with the body hair on it makes me very inspired to create a biomaterial that looks as if it were a "body hair second skin".

We experimented with Gelatine, Alginate and Agar based bioplastics at day 1 in Fab Lab Barcelona.

My gelatine-based bioplastic initial experimentation was made with three qualities of mix: hard, medium elasticity and very elastic. I used in my tests mica powder, carbon powder and long wool fibers.

The recipe for the gelatine-based biplastic we made to experiment is:

We followed to add 0, 48 and 96g of glicerine to it to obtain the three qualities of elasticity. 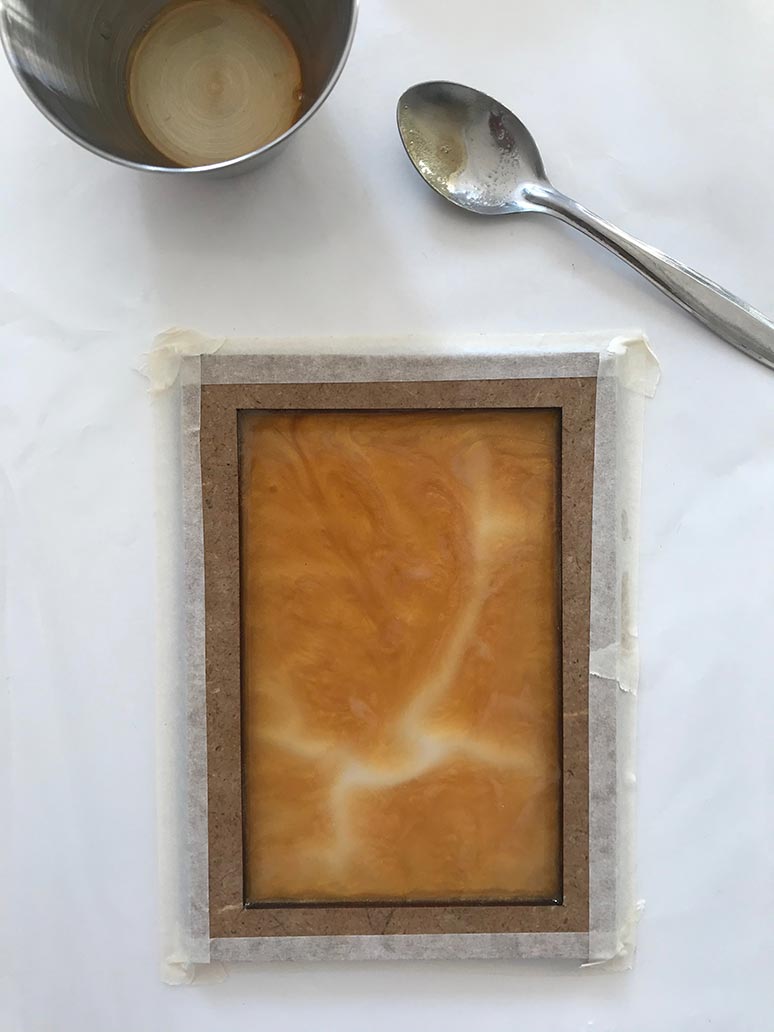 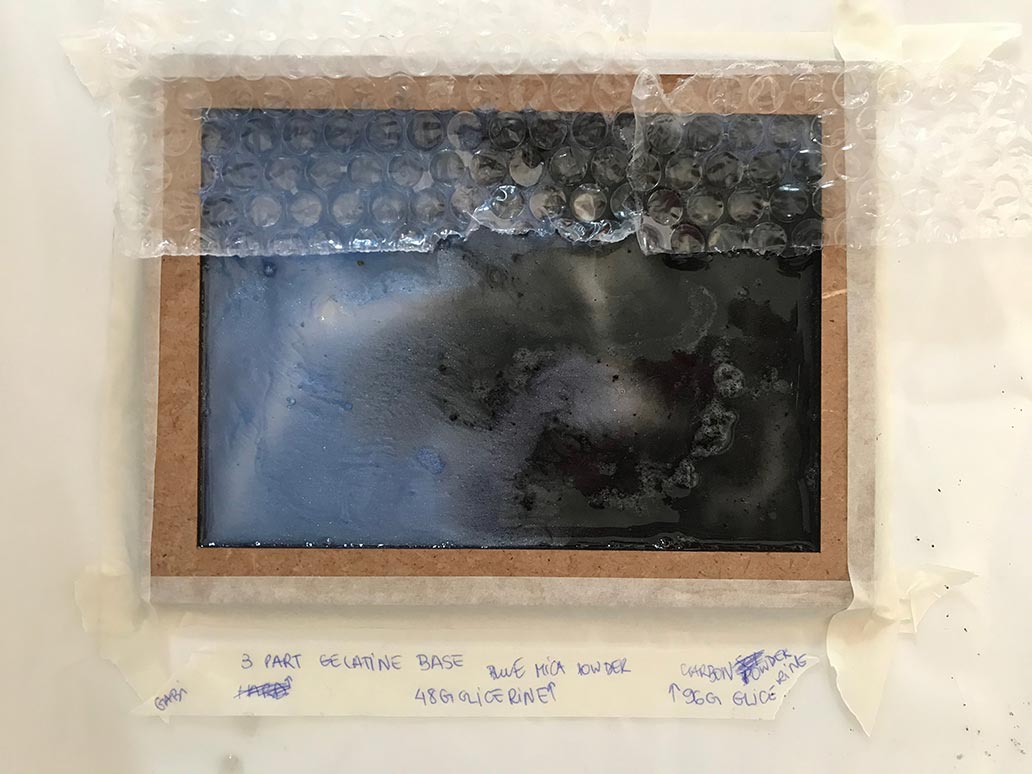 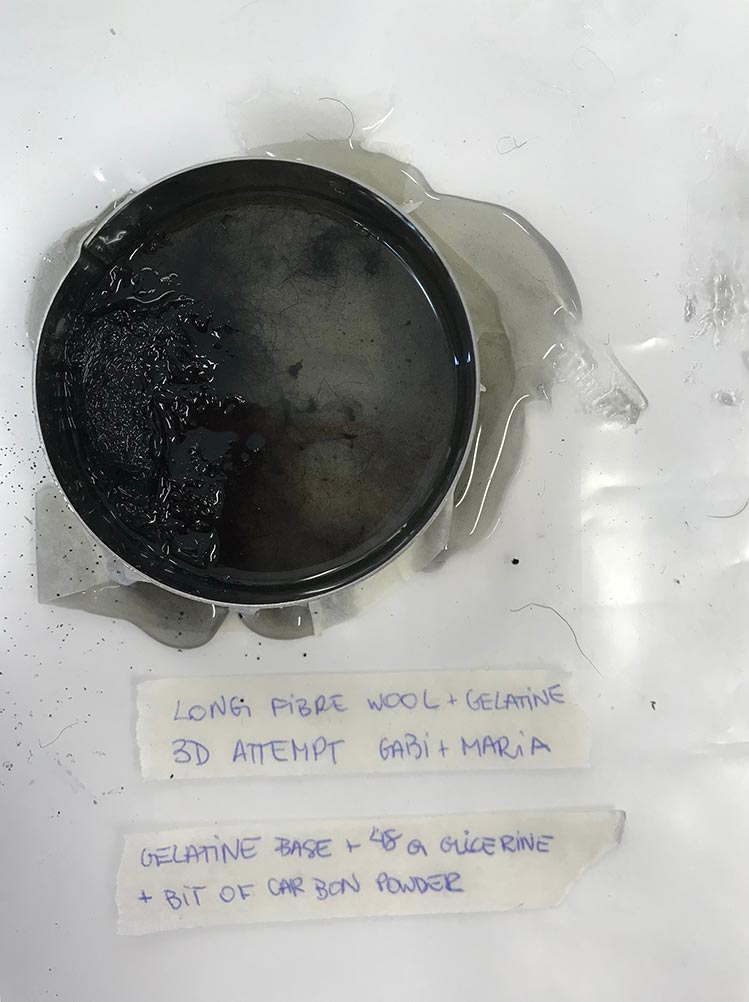 My alginate bioplastic initial experimentation was made with the addition of red and light blue mica powder that I mixed well together and with some carbon powder that I tried to mark the earlier combination with.

The recipe we used is:

Me and @loana.flores actually had to make some more to experiment a bit more with on the second day too 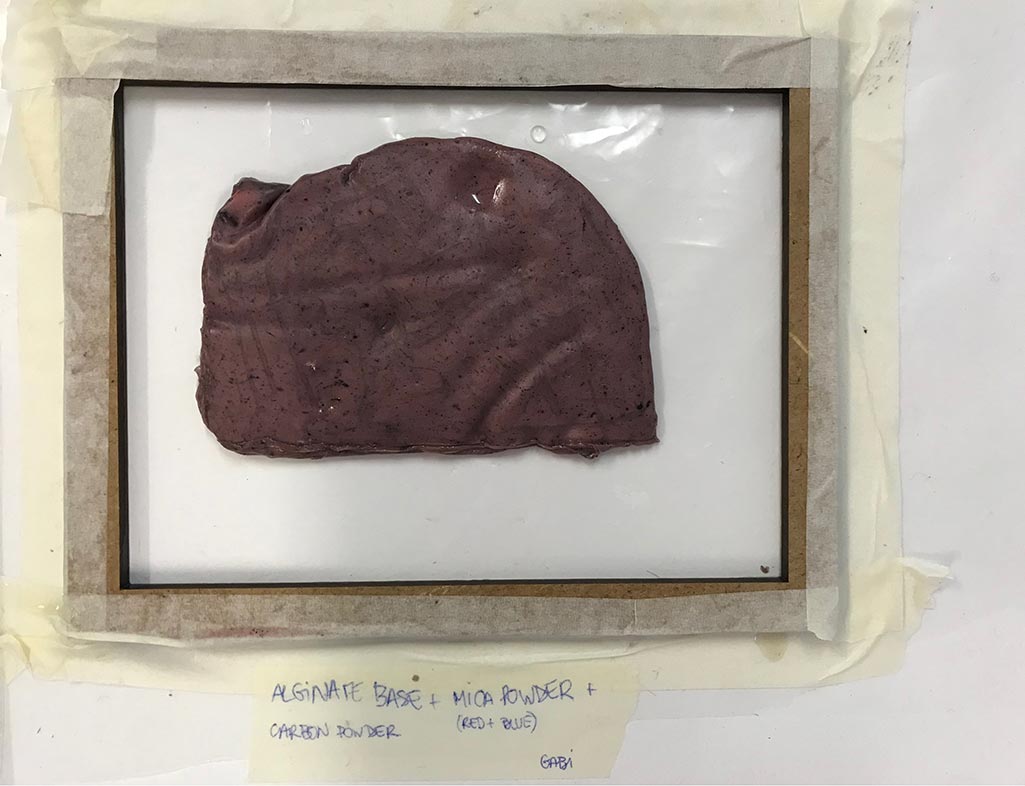 My Agar bioplastic initial experimentation was made with green mica powder, as well as everyone else's in Fab Lab Barcelona.

The recipe we used is:

Some examples made by Maria, one of the Fabricademy interns at Fab Lab Barcelona:

I decided to use a white tule as a base and to play with circular shapes, adding one circular mold inside the other and also taking off a couple of bits with a straw and separating other bit with the straw to see what quality I would achieve.

In the end of the day we left it all to dry at the special climatization machine at the lab, where it's dry and stays at 25º Celsius:

We experimented with Mycellium and learned about Kombucha, with the guidance of Jessica Dias, one of the Fab Lab Barcelona's interns.

Here is a bit of the whole group's process:

My Mycellium Initial Experimentations were made with paper thread stretch that we gained from Eurecat in Canet De Mar, one of the pure and the other with more cellulosic materials: 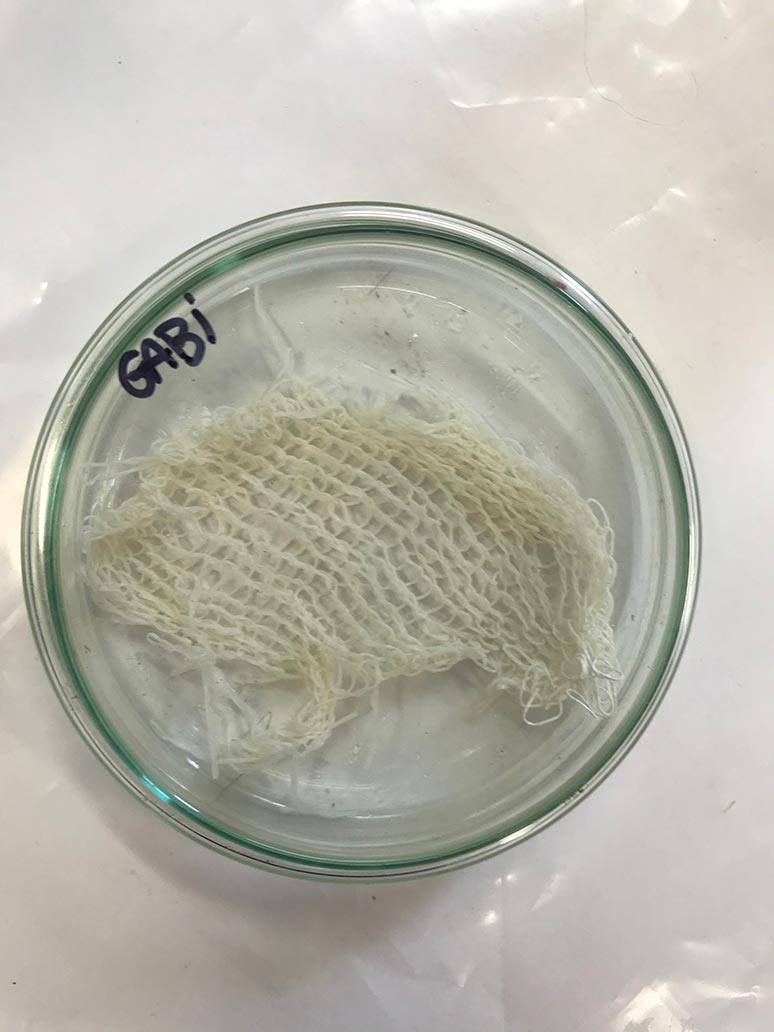 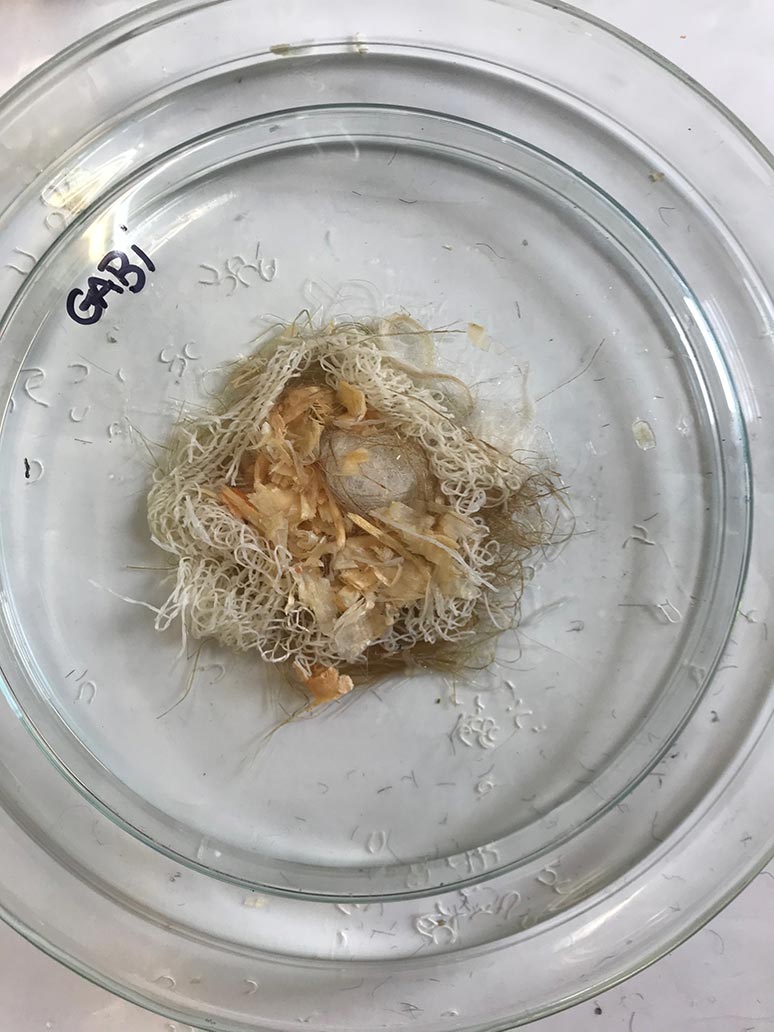 First Jess had placed the horse hoof type of mushroom in my sample, which got moulded on the first sample, that had to be binned and did not grow well on the second sample: 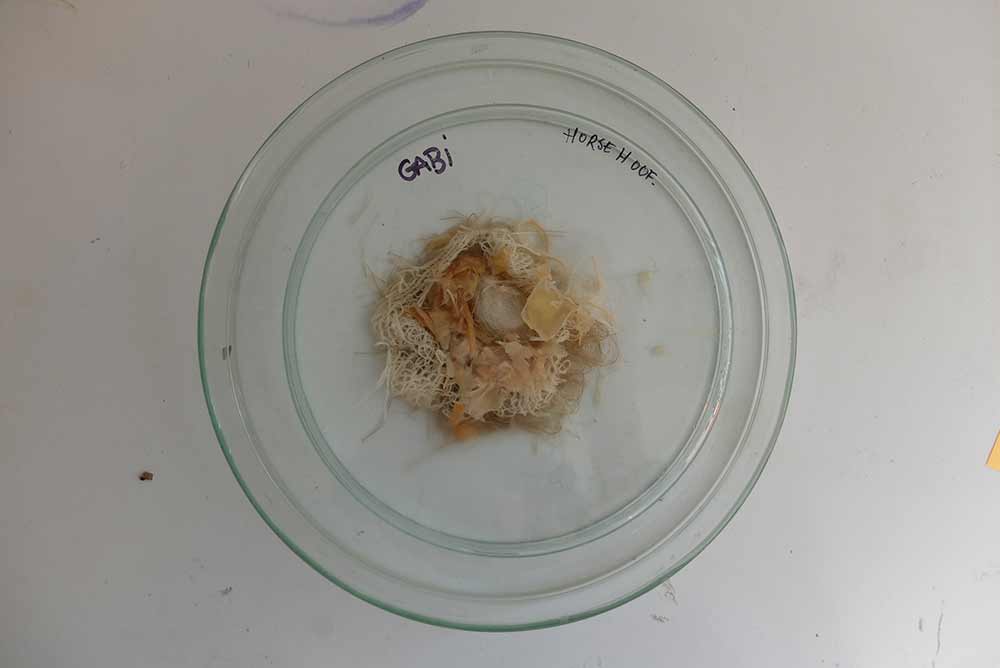 She then replaced this with the Oyster mushroom: 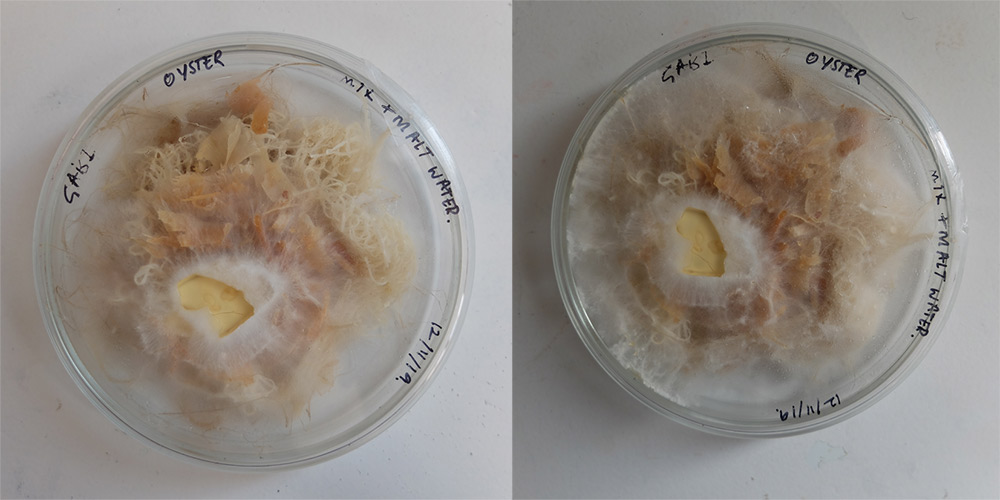 This was the result:

I did not have a chance to experiment with Kombucha yet, but because of the results I observed from other people's experimentatio I would say this is the most appropriate technique for my idea of making the "Body Hair Second Skin".

Instructions and other useful links:

Materfad is the material library in Barcelona. The visit there was very inspiring, Robert, the speaker, was an extremely interesting guy that introduced us to a new aporach to materials.

At the Reshape we had a chance to celebrate with @betiana.pavon, @ana.correa and @lara.campos who all won prizes for their projects!!

We had also a very inspiring Talk by an extremely well curated board of speakers:

Links (there are maaaany, including the ones from Cecilia's presentation)¶