I have started the process of thinking about my dress hoping to make it look like a second skin. I wanted it to be somewhat transparent and skin coloured. And hopefully look like skin itself. What I had to account for as I made my tests, espercially the initial ones documented at the Bioflaskin page, was that I needed this material to be stronger than just the pure alginate allowed me to have it be.

This dress on itself would have quite a lot of weight, as alginate in fact is not the lightest material. It had to be able to support itself. Also to its weight I would add on the weight of the Bacteriquid inflataing the Bioflaskin.

For this reason I decided to test out different fibres mixed into my alginate pour in different ways. I figured, skin grows hair too. Why not add that to y second skin if it would allow a better result?

I tested out the following fibres:

When I first made those tests what I was doing was:

This ended up leaving me with material that had many weak spots and in which the fibres, because they weren't properly spread out first, gravitated into big bunches. 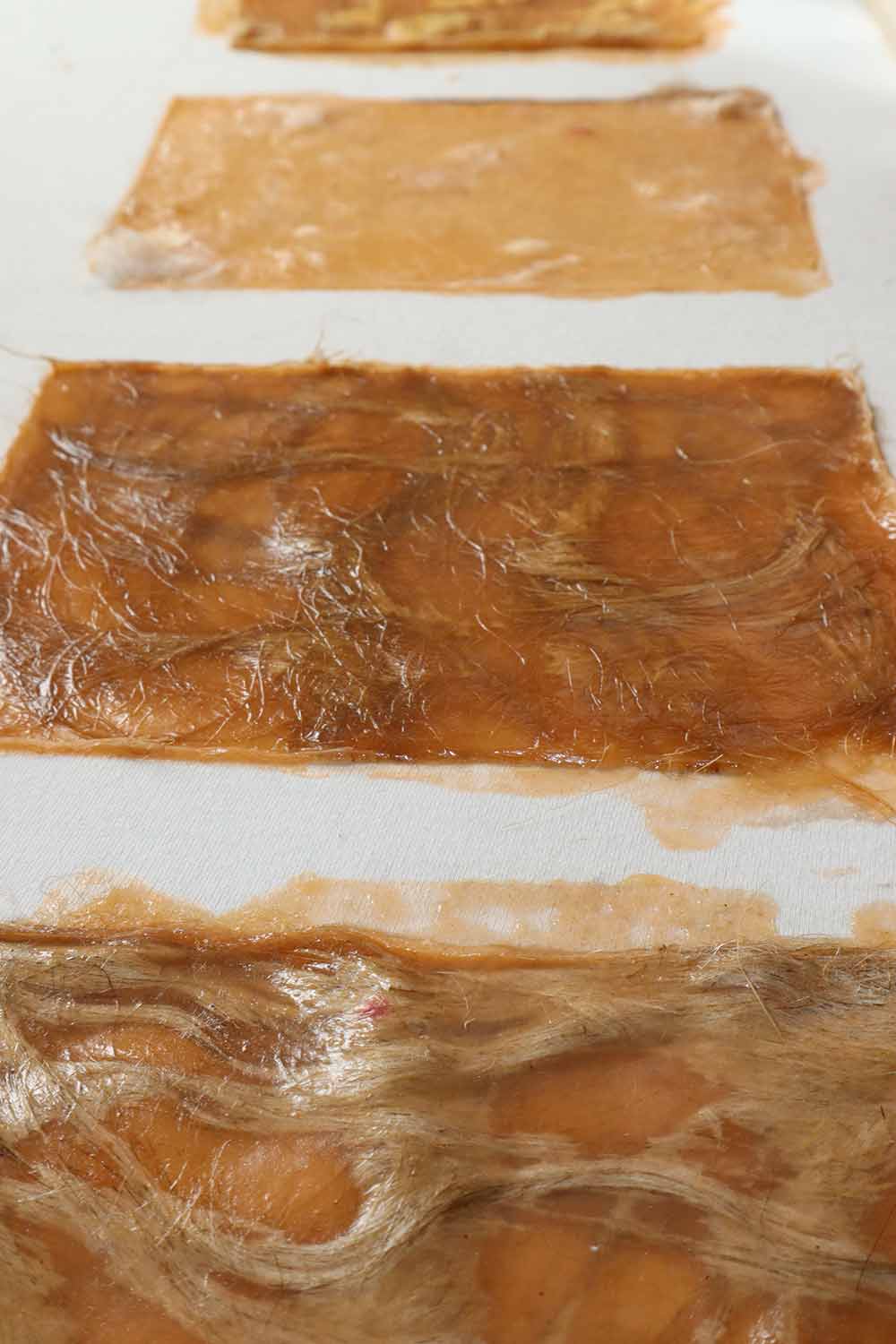 I also tried to spray the fibres before placing them once, which ended up leaving me with many bubbles between the two layers and a quite cool bit of the fibres that didn't get embedded, that could at one point be useful, not for making my algdres, though. 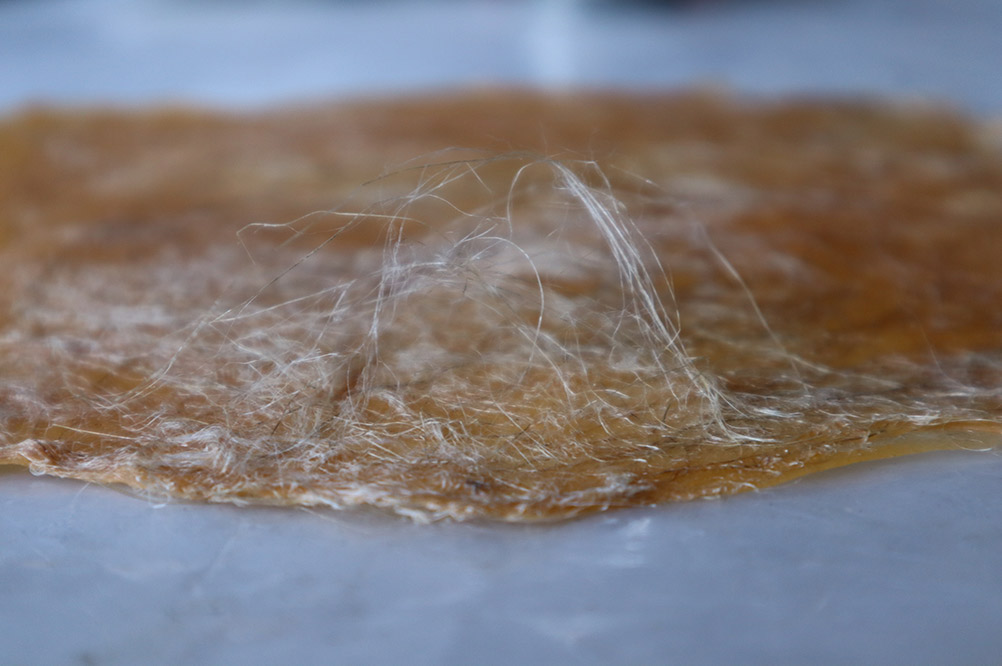 Once I spoke to Anastasia and Jess (thanks ladies!) about those inital tests, they instructed me on a better way to make this work and I adapted it with a touch of organicity to the look of the fibres dispersion:

I decided to go for the hemp, as this would allow me to make a veagan dress all over, since alginate is an algae based material. I also Really liked the colour of the thinner and clearer hemp on my colour mix. Lastly, the length of the hemp allowed me to dispose it in my alginate in a quite organic way, that realted to my entire design very directly. 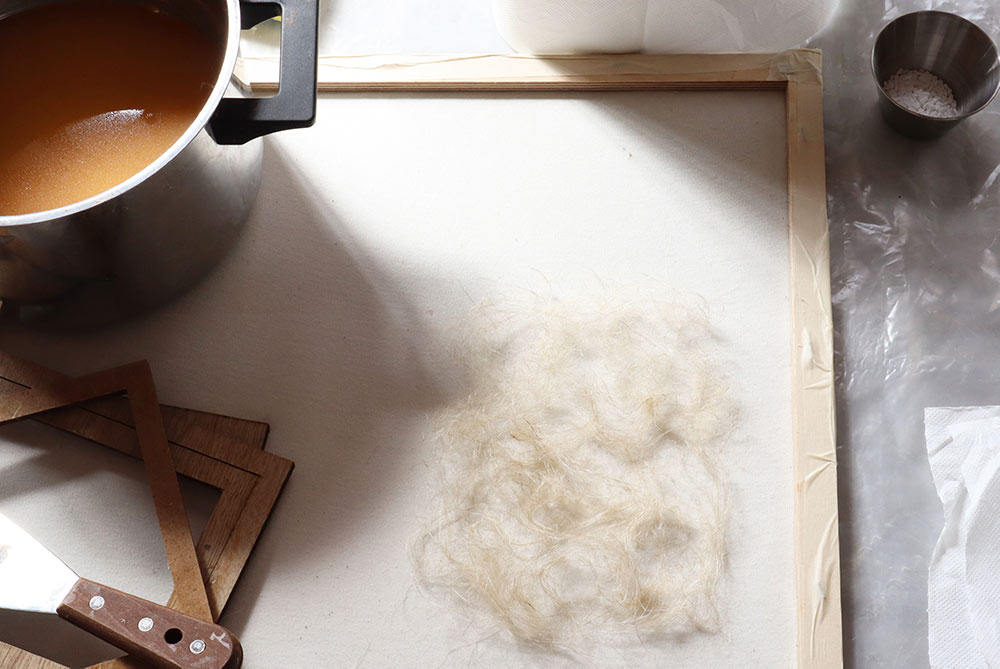 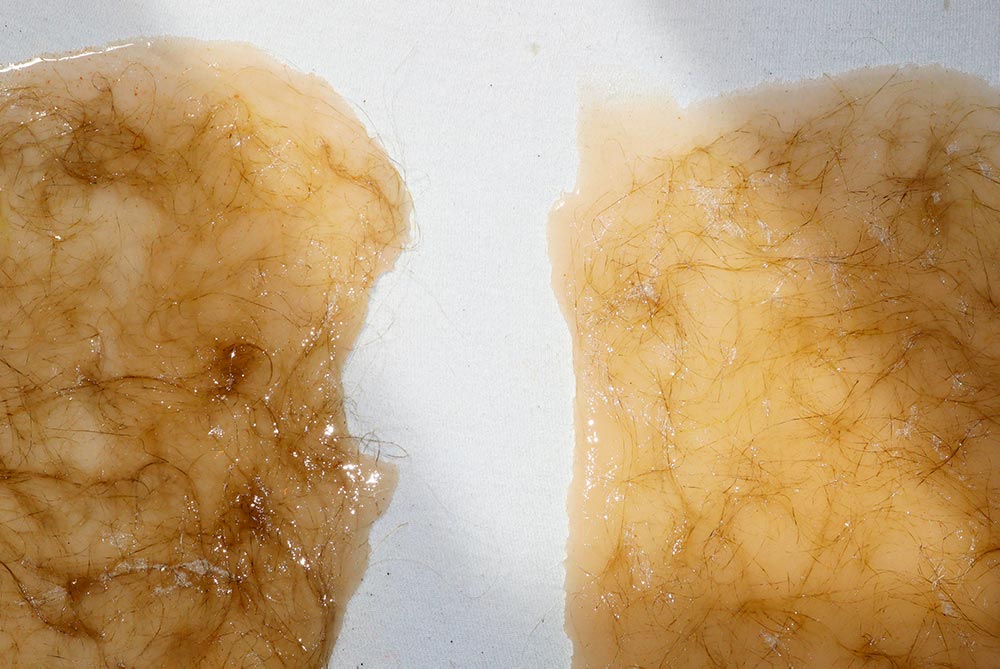 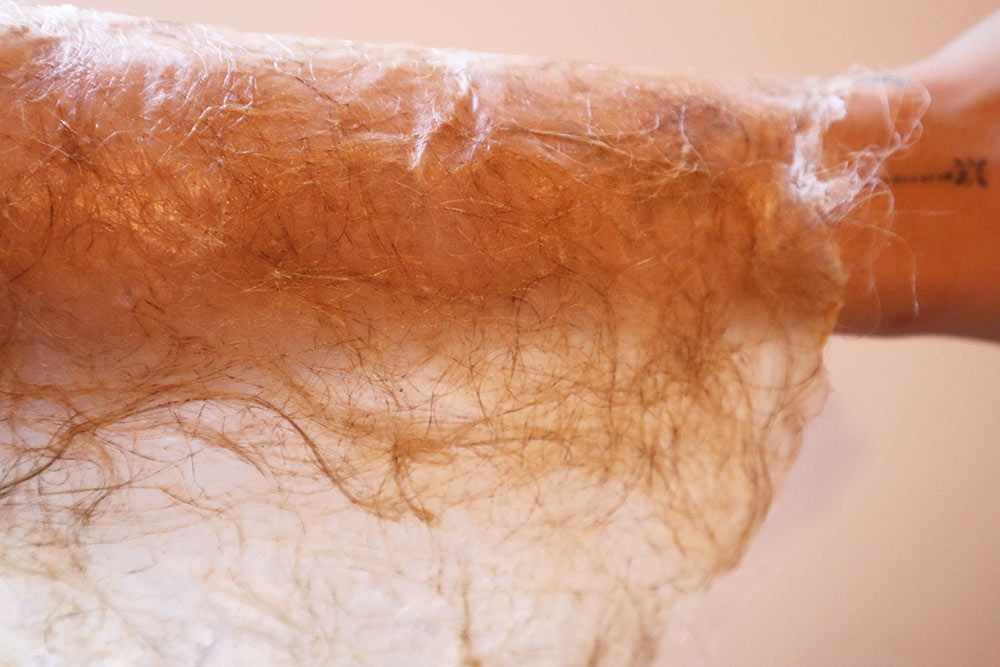 I have also tested out all of my samples by sewing them, which again led me to deciding to the final Methodology described above.

For this part of my process I was already working at home, due to the COVID19, so I couldn't build myself a huge frame, nor buy any more of the base fabric than what I luckily already had at home. I also did not have a big enough and completely flat surface to pour my alginate sheet in, so I had to find the flatest part of my building's rooftop and make it there. This meant that I had one side that was slightly thicker than the other. What I did in order to "fix" that to my ability was I added a bit more fibres to this thinner side, to make it stronger.

I left it overnight, to get rid of all bubbles in it.

I then went up to my roof and created a working space for myself:

Once it was dry I did some movement experimentation with it in order toget the feel it gave to my body before turning it into the algdress:

I was able to take Moon Ribas' measurements from her 3D body scan, in order to do it I made a curve on front view wher I wanted it to be, projected it on the body and used the length tool to see how long that project curve is. There is you measurement. You can then input that number on you measurement sheet, which I added on the Files, the last item of this page.

How to Take Measurements Out of a 3d Body Scan from Gabriela Lotaif on Vimeo.

I started making the algdress by using this pattern tracing instructions:

How to Draft the female Bodice Block

From the basic bodice I adapted its cuts to make it seem more organic and to make sure to fit the Bioflaskin in the centre on the front according to the following drawings I made: 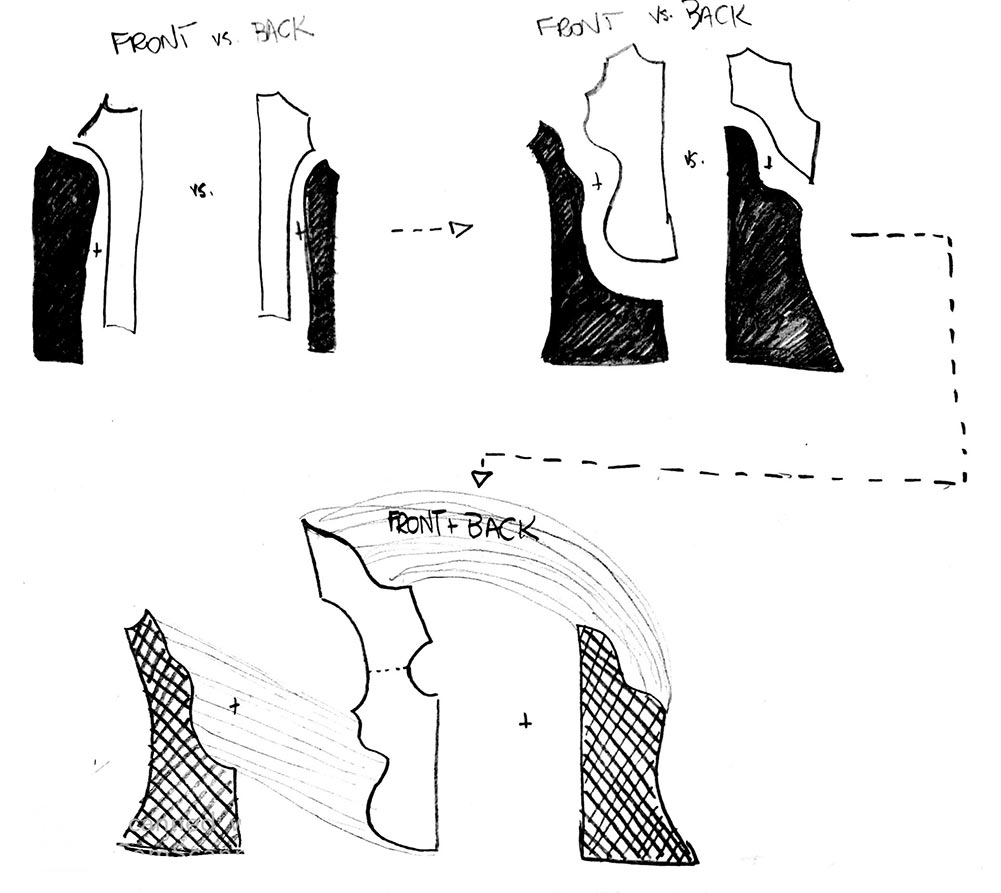 I then made the dress and tried it on, but I really wasn't happy about its shape, nor about the size of each of the patterns in relation to how much basic fabric I had available in my house to make the alginate sheet from (at this point I had been working from home due to the COVID19).

I decided to completely readapt my pattern afte giving my whole design deep thoughts, as wel as trying out some of the movements I wanted to have on the performance in order to put the Bioflaskin in focus.

What made me change my pattern for the dress based one was:

I then remembered a dress I own that would be ideal to give the freedom of movement needed and show some real skin as a base for the algdress' pattern: 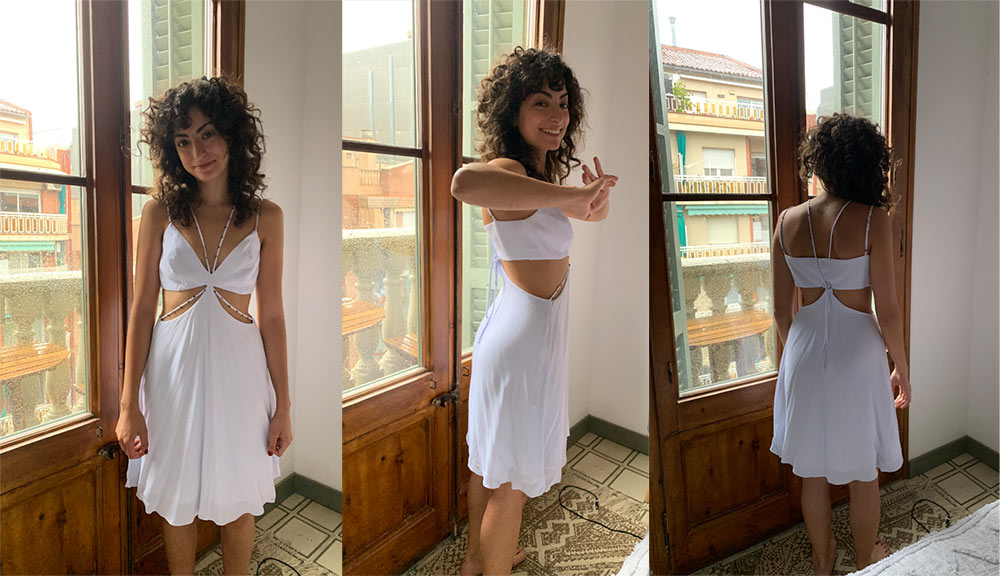 Based on this dress I traced it's patterns and adapted them to having a more closed neck, with wider shoulders, initally not having any seems on the top part, only the one connecting to the skirt and the closure on that back, that I would use lacing for. I also adjusted the skirt length to give it the effect I wanted it to have, a shorter frontal length on the right leg, a longer one on the left, even longer central back lenghths. Lastly, I took out the seem on the centre back, leaving the back of the top and bottom completely separate: 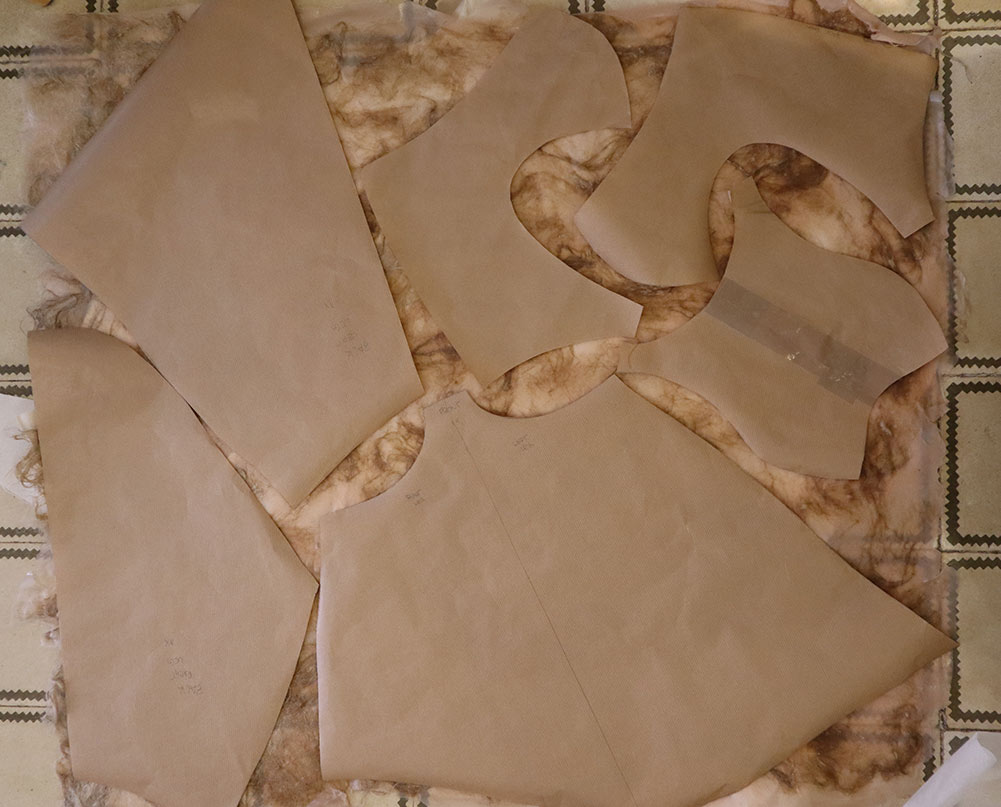 When I place the patterns on my Big Alginate Sheet, I was quite desperate at first as I had not as much space as I had thought I would and I had no more acess to alginate, since Spain was still on complete lockdown due to the COVID19 and the delivery systems would not transport the alginate to me due to its content (I don't know, they must have thought I was making very dodgy things).

I had to add both a shoulder seem and a lateral one to my top in order to fit all of the dress in my sheet. I had also not the abilty of positioning the seems strategically on the strongest bits (with more fibres embbeded) as I wish I had been, which made me have certain weak spots that I sorted by adding the very little strong remainings of my sheet to its back, sewing both carefullly. Not ideal, but it solved my issue fo rthe time-being.

I had also to add an improvised bias from the remainings of my Big Alginate Sheet on the back cuts of my top in order to be able to punch holes through it for the laces to go through. Luckily, I had hemp lacing at home, so I used it.

Had I had my ideal production in this case, I would have made each piece's frame's cut on the lazer cutter (with enough margin for shrinkage) from the base fabric and poured my alginate in separate bits, being able to manipulate the position of my fibres to my bennefit.

My silly initial thought was to sew the bioflaskin to the dress, that's why I made the tests with fibres on the outside for my inflatables. This was not a good idea for two reasons:

I thought of a way to make the pocketting:

I then tested out how to make these pockets, first with calico and the Bioflaskin initial pattern:

Then, once I had the Final Bioflaskin and it's pattern, I made another calico test in order no to cut directly my only Big Alginate sheet cutted patterns:

I had to adapt its shape slightly, but finally made the pocketing on my final algdress:

I also added to it a small strap on the seem between the top and bottom, this strap could be taken out and buttoned back in, I used transparent plastic poppers for it, the only ones I had:

I used actual fabric for the back of the pocketing for two reasons (and I was lucky to find a good-enough-coloured one in my fabric scraps at home): 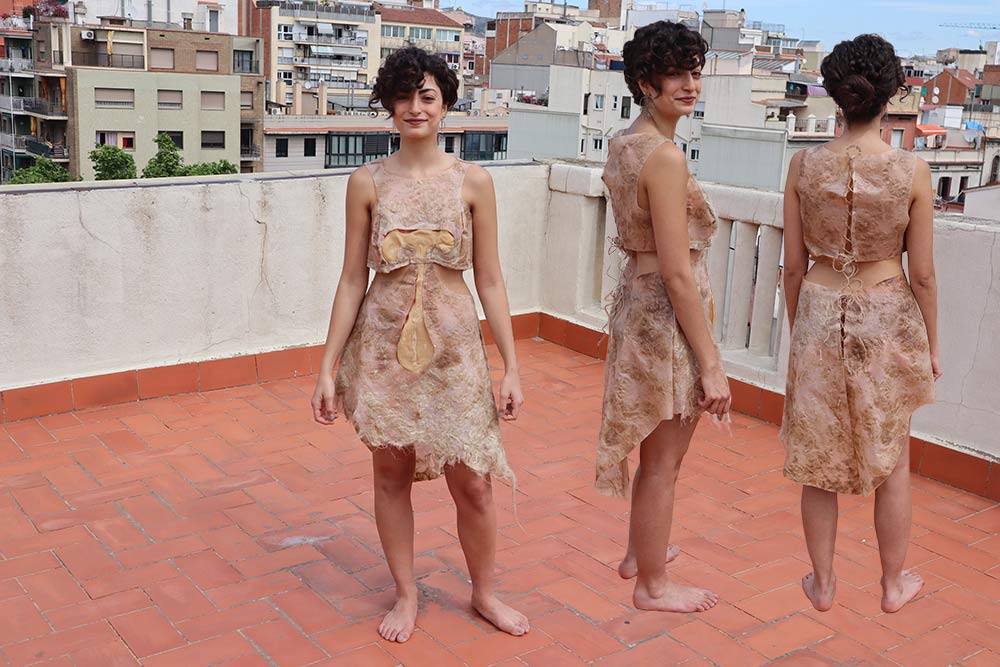 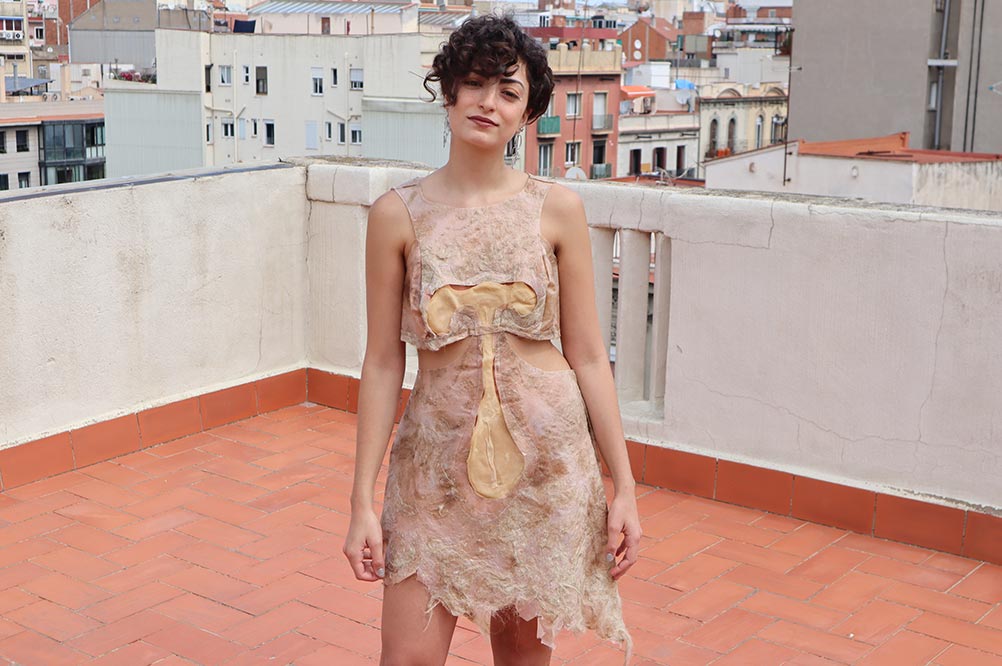 I Spent more than usual sewingv the Final Algdress, just to make sure everything was fine with the alginate, it's very important to be EXTRA EXTRA careful handling it. (And I am not the most delicate human being on earth) 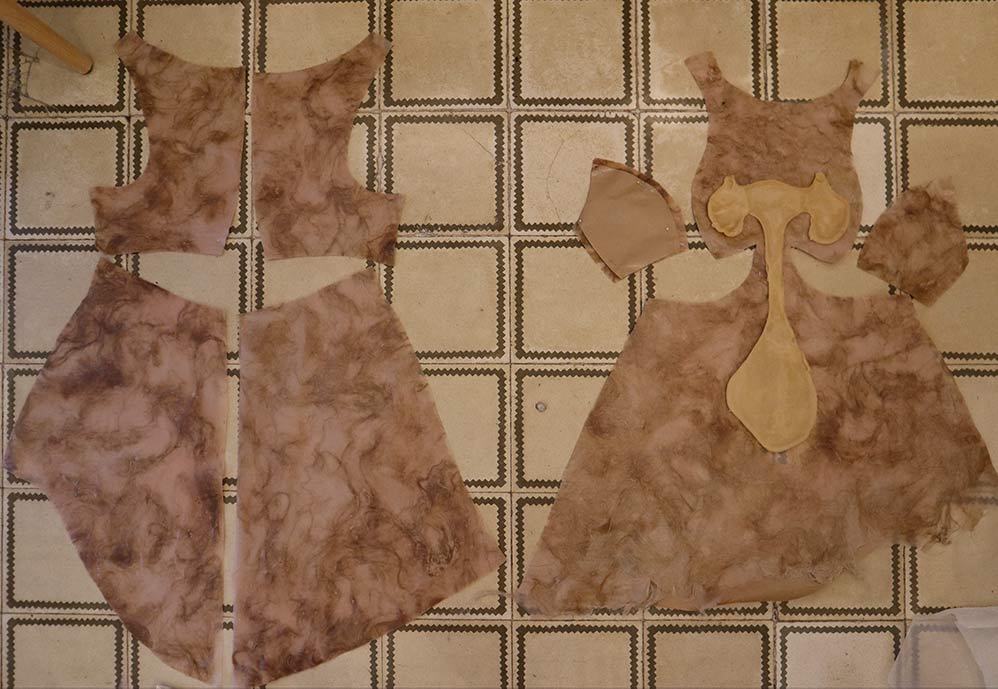 I love the fact that the algdress's alginate, even after many days from when it was made, was still seating while I was cutting the pattern on it, with the paper patterns pinned to it, it made think that I really had made a biomaterial skin: 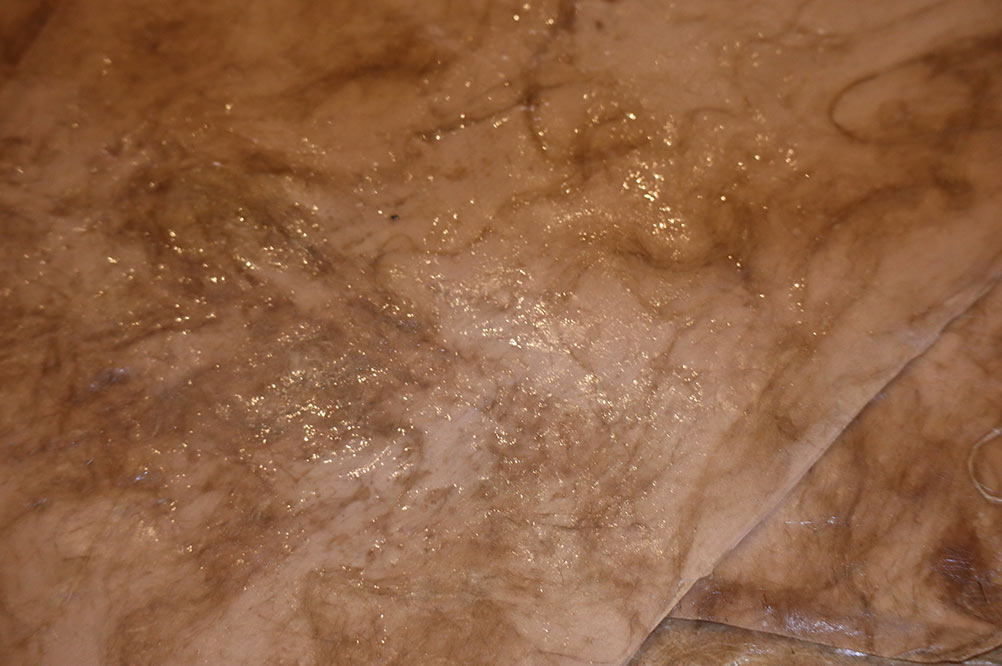 My idea is to also scan all my patterns and create a Open Source Rhino File with them.