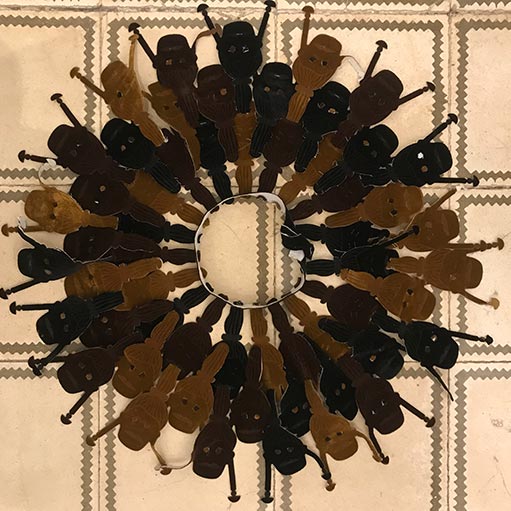 When I first started considering how the modular textiles are built I immediately related the need for insertions to existing structures that naturally isert into one another. My mind automatically travelled to the idea of body insertions and sexual intersections. With this flow of thought came the idea of looking at sex artworks, especially the London Frieze Art Fair 2017, which I visited and had one of the biggest sex artworks assemblys in the fair's history.

Looking Back at that list of artists I decided to use one as my main inspiration font for this project. I found her work would mainly relate to my thinking and I understood I could generate interesting modules based on it:

I also used Maru Beth Edelson's work in order to take inspiration as to what my final product would be: 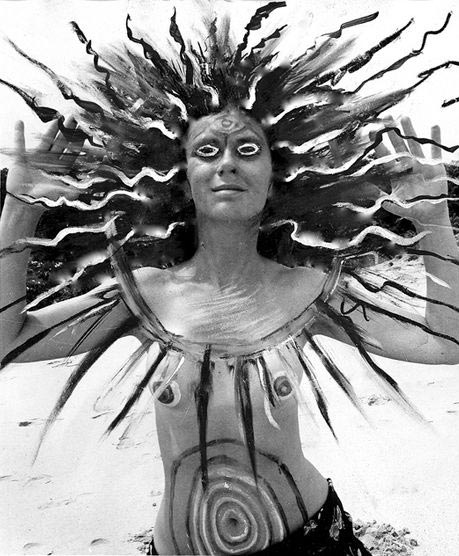 Computer Programs Used in this assignment:¶

I experimented with a breast shaped module and a Face shaped one, both based on the images of Mary Beth Edelson.

The first design I did was based on the image of the reated breasts by Mary Beth Edelson. I decided to make it pretty big so it visibly resembled breasts, so it's diametre is 10 cm. I have however not cut it on the lazer cutter, as I decided to realise my second module.

The second design I did was much more complex, I learned much better how to get along with Rhino after it. I used guidelines to assemble all the curves and I hatched certain elements in order to engrave them on the inside of the cut lines with the lazer, for decorative purposes.I am very happy about it, actually!

the step-by-step of the Trotec is: 1. turn extraction on
2. turn lazer cutter on w/ key
3. Machine will do the homing on its own
4. Leave it to do so and go to pc
5. Insert usb
6. Open rhino
7. File - Import your DXF file
8. Move selall (or selection of section to be cut first) to 0,0
9. Make sure all is in a 1000 x 600 box (max. in the trotec in Fab Lab BCN)
10. Ctrl/Command p in rhino having selected only what you’ll print
11. Window w Rhino Print settings will open
12. Click properties
12. Insert size of material you have and click ok/press enter
13. Click set, move paper to 0,0, click enter
14. Make sure scale is 1vs 1
15. Choose vector
16. Choose Display colour
17. Clcik print
18. Printer settings will open
20. Drag your file to the main space
20. Double click to see your file
21. Close visualisation (if opened in step 20)
22. Connect to lazer cutter (usb image bottom right)
23. Drag file to 0,0 or to where the head is
24. Chose material from the presets or add new
25. Click adjustments - prametre of configuration of materials
26. Layers appear
27. Ignore all layer not used
28. Cut for all layers meant to cut fabric
29. Engrave for all layers meant to engrave fabric
31. Speed 3 or 4 for cutting, 50 for engraving
32. Power 50 for cutting, 25 for engraving
33. Frequency 1000 hz for cutting, 1000 ppi for engraving
34. Back to lazer cutter
35. Put bed up via the up and down arrow
36. Put fabric on 0,0 and tape it to bed
37. If fabric is thin turn off aur assist on parametres in the pc
38. Move head via 4 arrows to place where focus will be tested
38. Focus w/ white focusing tool, place it on head and lift bed little by little till it falls
39. Move bed till it touches fabric/ falls
40. In case lens is dirty, take it out, clean it and put it back w/ curve w/ open side facing up and curved side facing down
41. Close lid
42. Press play in computer
43. To cut again - right click, repetir trabajo
44. To delete work: right click, delete
45. Rhino- make 2d - redesign (when cutter doesnt cut well)
47. When not totally cut, either go slower or choose more power
53. You can change power and speed in computer while machine is cutting if its slightly probvlematic

* In order to engrave something you need to have it hatched in Rhino, not as curves.

* Make sure that all objects have a colour in their properties in rhino before sending them to the lazer cutter. Not ony the colour of the layer is important, but especially the one in the object's properties.

* In my case also there was this issue that the trotec lazer cutter for some unknown reason was not reading the engraving in any other layer than the black, so I had to set the hatches all on black and the curves for cutting on the blue.

When designing my module I had already decided to use some fabric that would allow me to engrave some details on it with the lazer cutter in a lesser potence as well as cut it with a stronger setting. After consulting Anastasia I realised my main options were:

I decided to use velvet because of the shine and the possibility of colours. With denim I would have to stay with the denim shades, which did not match my idea of having the modules cut in a colour that would bring to mind the idea of skin tonalities. And with leather I would have need to have time to source naturally dyed leather or to test the coating of unknown ones to see weather or not it contained chemicals that should be used in the lazer.

I used the skin-relating colours of black, brown and beige-like shades of velvet which I was able to find in a store. I did not choose any lighter shades because of the effect the lazer would have in them, of possibly staining them with burn marks.

On my first test I realised that the material I had was too thin:

On my second test I used interlining to test weather that would make the velvet stronger. I also had to make the eye's intersection a bit wider so they wouldn't break as easily as they had in the first test. this time it worked out very well:

I followed to cut as many modules as I could on the surface I had interlining for. I rapported them like this, based on how the interlining was in each colour: 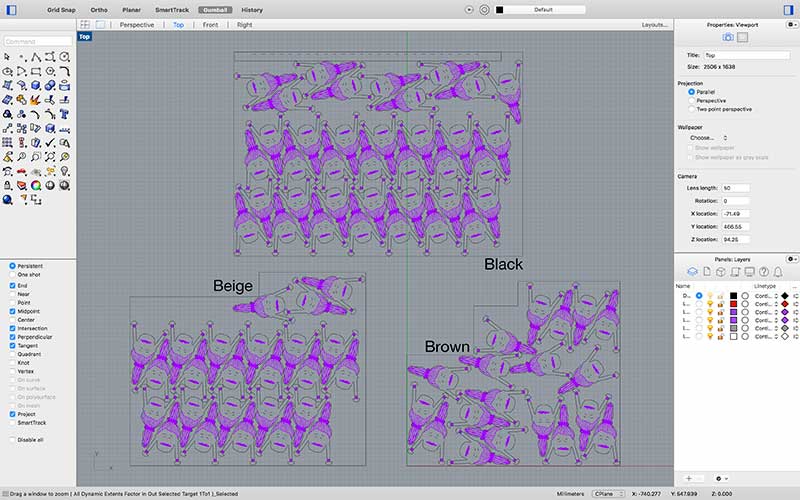 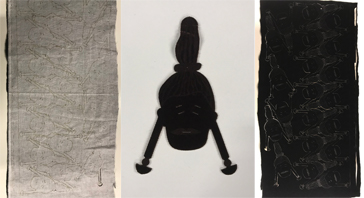 I ended up using the white interlining we had available for time and economic purposes but the idea would be to use the interlining in the same colour, or a very similar one than the fabric on top of it, you could find it in Spain for instance through Alamacenes Freigenedo

Assembly Process and some options....¶

My idea was to base my assembly on the image of the necklace drawn by Mary Beth Ellis, that may allow me a female performance that might relate to the use of necklaces as ritualistic elements. It may also represent in certain levels the ethnic practice of skin showing vs. accessories covering sexual parts. So the necklace would e worn on the naked body of a woman and would lightly conceal her breasts and torso as per planned by my design: 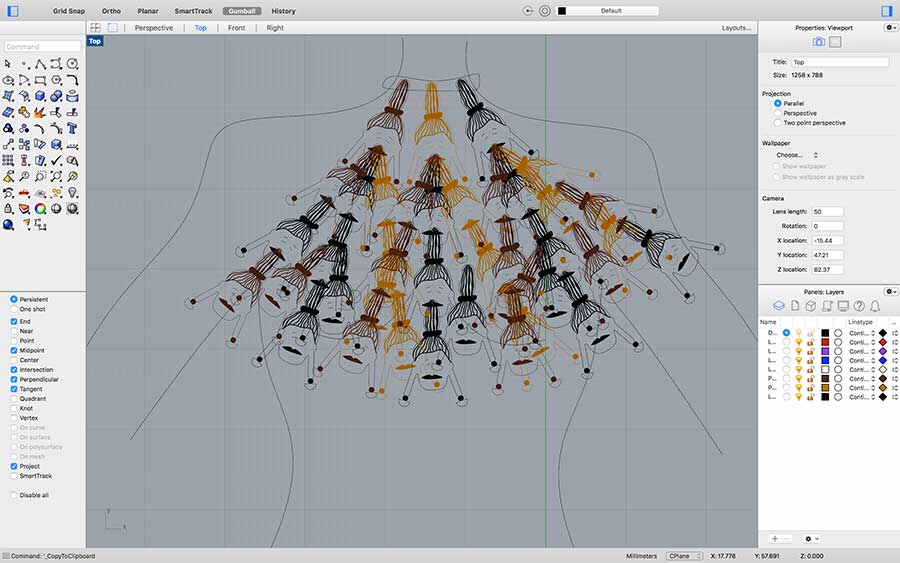 The assembly steps are as follows:

After having assembled the whole neckpiece I realised the need for a second support for the hair of the second row, so I created the file for it and added that to the ready to lazer cut download found through the link bellow. 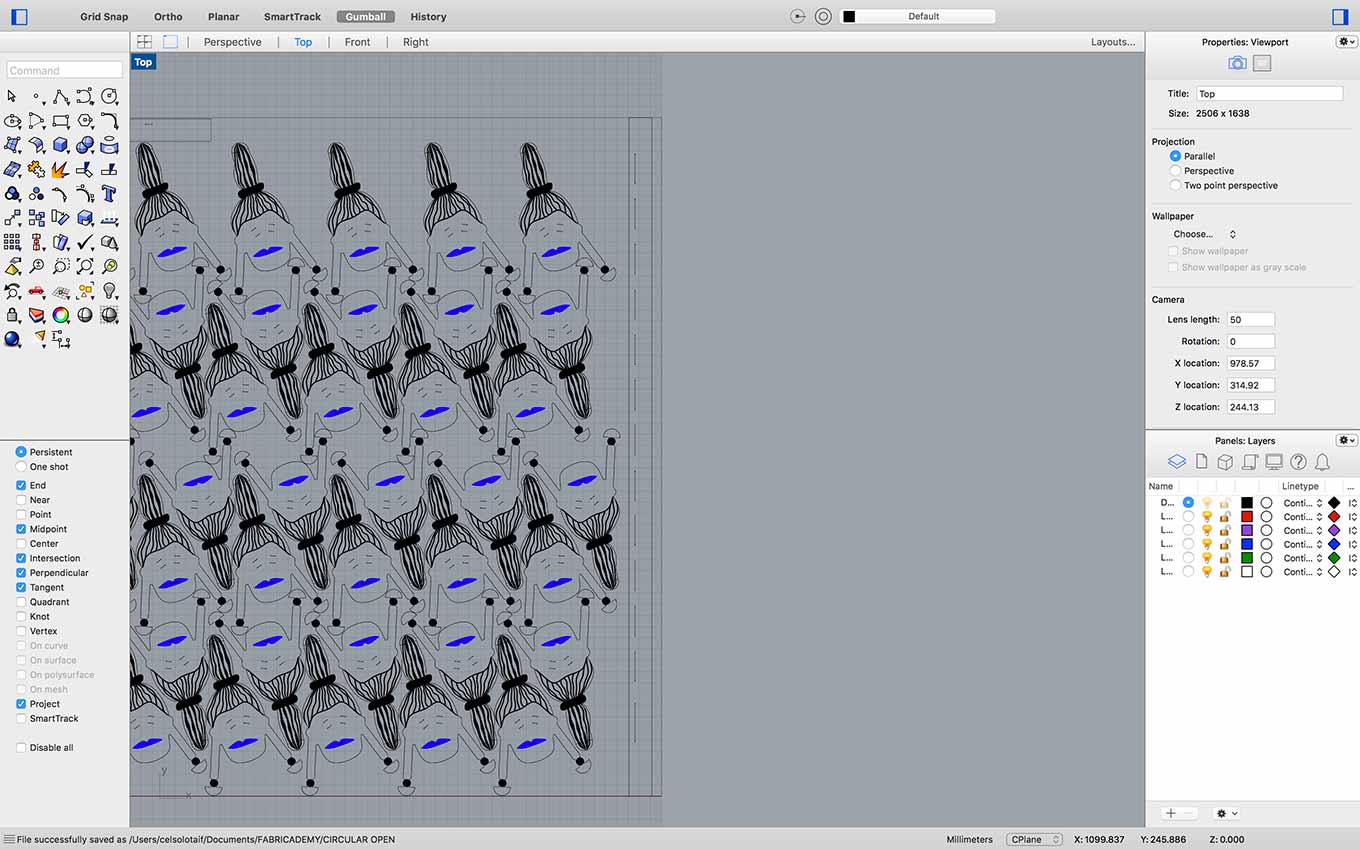