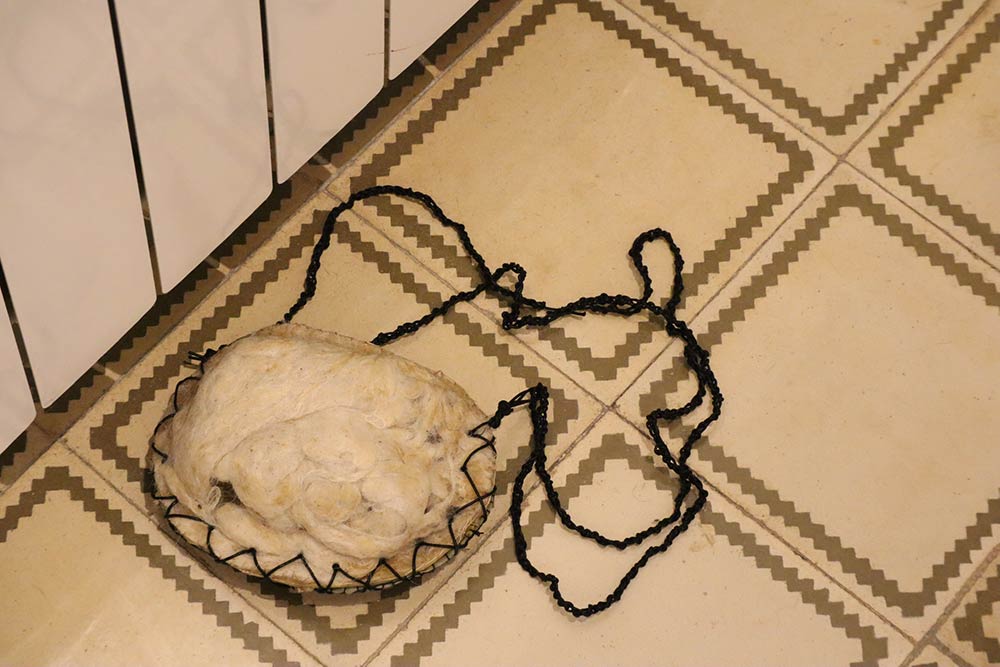 I was inspired by the deconstructed the body in Surrealistic art, especially focusing on how Salvador Dalí represented the image of the female body and its curves

When moudling leather the first thing needed is the design of a mould to be cut, in our case here at Fab Lab Barcelona on the milling machine.

I designed mine from the image of a buttox that I actually made 3D through the heightfield tool in Rhino. My idea was to edit the 3D object to make it look more descontructed as my references above, but I was lucky enough to have Rhino distort it for me! As my image had a texture and Rhino reads greyscale, when I imported it to Rhino it became all lumpy. All I had to do (not the quickest job) was edit my lumps so they had a small height and formed a buttox shape more clearly.

After designing the mould we passed our file through the RhinoCAM plugin in order to setup a gcode for the milling machine, at which we programmed the whole seetings for the file to be milled in.

The settings used for my file in RhinoCAM were: We also prepared the blocks for moulding with an amazing latin-american collaboration:

We made the maths of how many people we were and how big each our mould's heights were. We accounted for the need of 6 more mould with 60mm height other than the two 400 x 600mm ones we already had available.

We followed to cut the wood sheets with 12mm height we had here at Fab Lab Barcelona into pieces of 300x300mm (the pre-established maximum size of our designs on Rhino by Anastasia, who very wisely knew these were good measures to cut from the sheet of wood)

After cutting the pieces, we glued them together in blocks of 5 and left them drying over the weekend in order to mill them on monday. :) It's important to leave the blocks drying with the help of clams so they be as well arranged and as stiff as possible.

Once the block were dry and ready to be milled we took turns at Fab Lab Barcelona to actually make our moulds.

My file (as almost everyone else's) had to be changed to a lighter, quicker version of data for the milling machine as otherwise there wouldn't be enough time for us all to make our moulds. This meant that I only had the first milling done with the 12mm tool and only one more one with the 6mm tool, the first was radial and the second made in lines.

I followed to finish my mould by hand with a bit of sandpaper and the drumel tool with two different edges. I also added two hands of varnish to it:

I started testing out a few gelatine + piñatex biocomposites. My idea is to achieve a silocone-like texture that can be moulded with vacuum to my mould, so that in the end I have a wobbly sort of cellulites-full buttox to use potentially on a akirt pattern. This is agian relating to a current refence of mine, Synead O'Dwyer

My first very small scale textile of applying the bioplastic on the piñatex were done in three different versions of the gelatine-based recipe:

This is the preparation and making of the tests:

And now their result: 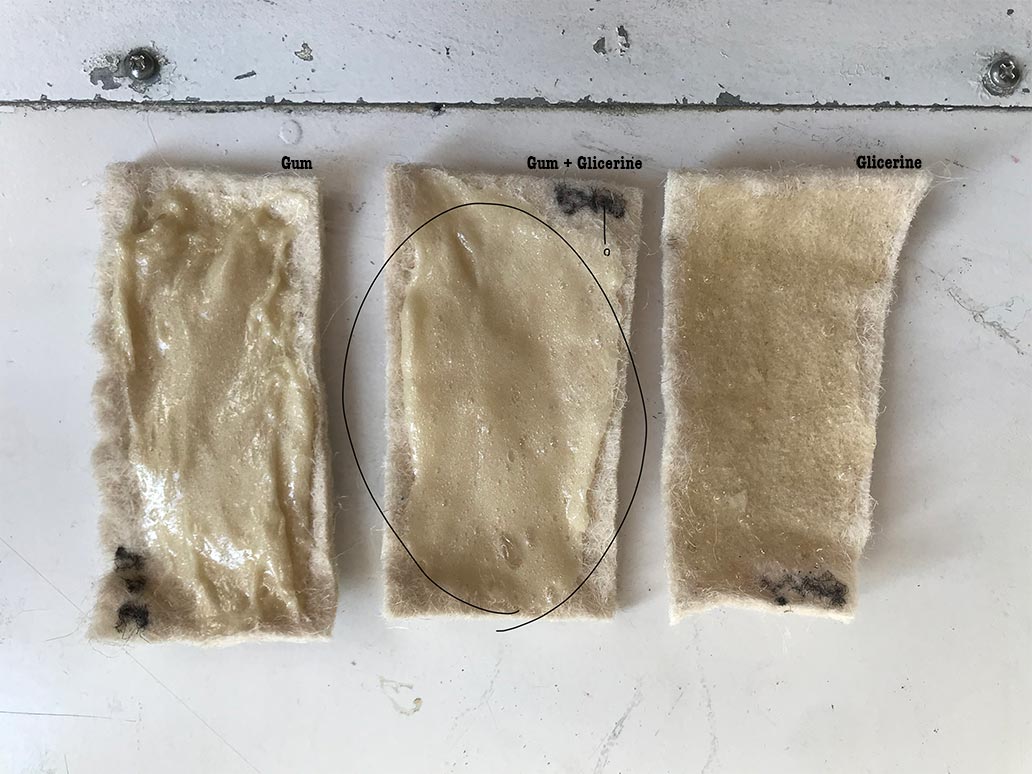 I was talking to Jess about my options after seeing the results as my mould is quite small and as I would need a thinner fabric to base my biocomposite on and she gave me the idea of actually separating the fibers of the piñatex and painting a thinner layer of my gelatine-based mix with Gum and Glicerine in order to mould it and have the shape be more precise to my mould's details... Then I realised I could even divide the piñatex in two, if I pulled both halves apart slowly:

Biocomposites, what are they? @lara.campos 's documentation at Fab Lab Barcelona last year Thank you for your help!

In order to apply both textile shapes I was able to get for the vacuum moulding, the leather and the biocomposite ones, I decided to put them together and create a clutch for them.

I first hadstitched a latex lining to both sides, after trying to machine-stitch them and failing because of the width of the biocomposite and the stickyness of the latex. I did this using cotton thread, as my plan was to create a biocompostable clutch.

I then punched holes through the two side on 280 degrees around it so that I could lace them together, again using a cotton lace. I also made a macrame strap for the clutch out of this same cotton lace.

macrame for clutch strap from Gabriela Lotaif on Vimeo.

And this is the final outcome:

In order to do the crystallization I decided to use the Brazilian Contemporary artist Tunga. He actually works with solids that look like fibers, especially focusing on making scultures that look similar to hair, but that are actually in huge scale.

The recipe for the Crystallization is supposedly very simple:

Tips for setting your creation: make sure to place it in a way that it shomehow stays inside the sollution without touching any wals of your container or the bottom, but is also more or less disposed as you would like your solid final piece to look like, remember this is a solidification process! Also add a weight to any loose tips so they don't move from the position you set them nor float, as this would mean their surface would not get crystallized.

We weren't too successful at achieving the desired effect.

Some theories are: 1. We over-saturatd the sollution and it didn't form the crystals as well as it should 2. We added too many pieces to the sollution and the crystals did not know where to form themselves around 3. We did not saturate the sllution enough, but this theory seems very unlikely as @juanfelipe.enriquez tested on his own after we all did, making two recipes, one more staurated than the other and the least saturated one worked better and faster.

This is how our sollution looked once saturated: 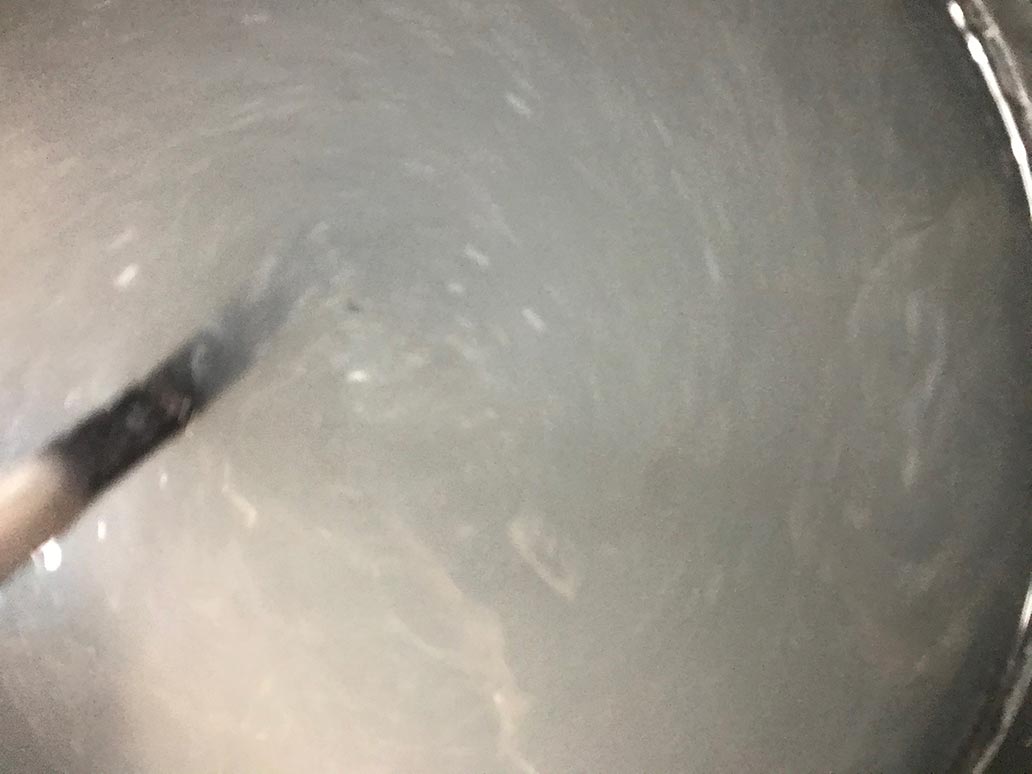 Me and @maria.javier put our creations on the same container (as well as one tiny one Jess Dias made), and decided to colour the crystals with purple. We only added our food colouring to our sollution once the water had been filtered on it by me and @amaya.deyavorsky:

Our insatisfactory result after 3 days having our creations dipped in water were: Computer Programs Used in this assignment:¶

Mould Gabriela Lotaif Textile As Scaffold by gabilotaif on Sketchfab