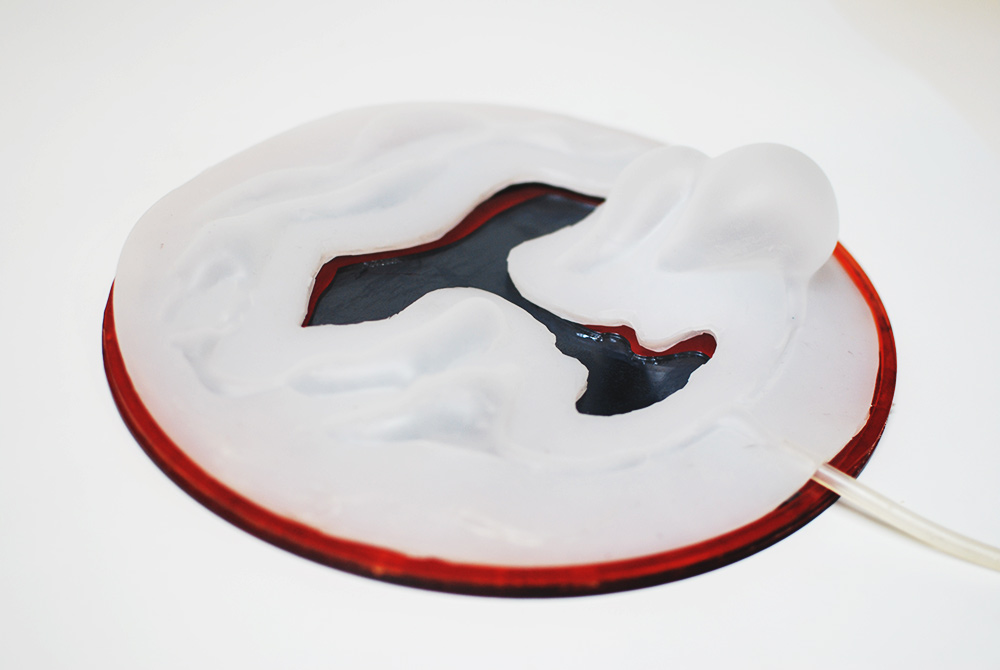 My will with my soft robots was to create the idea of a skin that is first smooth and that when inflated can become wrinkled.

I was especially inspired by the work of a close friend of mine, also a costume designer and to whom I performed. Radvilé Kisieliute developed a 3 aged character's Costume Performance for the Film Unit project at the MA Costume Design for Performance at London College of Fashion, UAL. The Short Film is based on the ‘Twelfth Night’ by W. Shakespeare, with the realized character of Feste.

On the first day after the class at Fab Lab Barcelona we each made our own first soft robot. It was an inflatable made of vinil interlined with a baking paper.

This is the Vynil cutter, it's like a smaller version of a lazer cutter for paper, vynil and other finer flexible materials:

In order to do my own I followed these steps:

This is how it looks:

In oder to do the silicone inflatable you need first to have two moulds which need to be thought as the "negative" of your base and of your inflatable side. In order to design this mould you need to make sure that your channels of air are all connected in your negative of the inflatable side and that they are cut in a thinner acrylic than the frames on the edges of the mould's base. This is in case you make it ut of acrylic and lazer cut it, as we did in Fab Lab Barcelona. The other option would be to 3D print it, but since we are many in Barcelona and we have only access to one printer we decided there would not be feasible as it would end up taking far more than a week's time.

I designed my mould thinking to make a mask that first seems flat and once inflated looks like wrinkled skin. 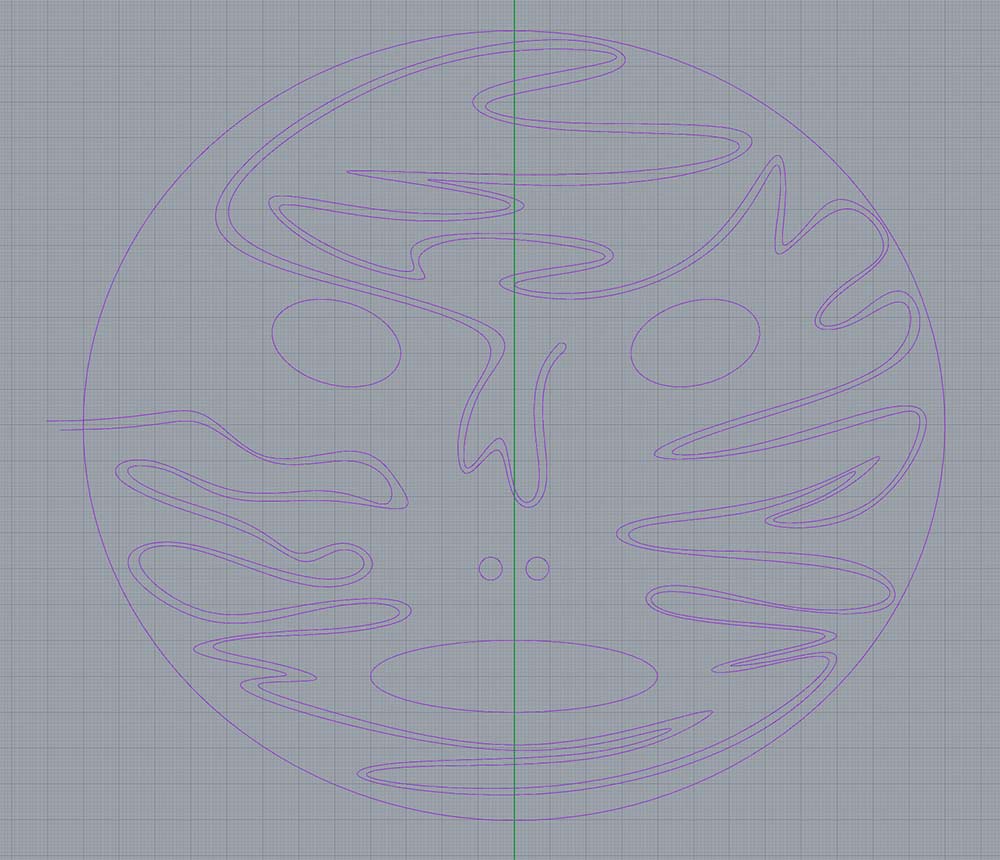 I then cut it on the lazer cutter. I cut 6 pieces in total: 1. A base for the inflatable mould out of the thinnest acrylic we had (0,3mm) 2. Its edge frame out of a thick acrylic (0,8mm) 3. Its channels out of a medium height acrylic (0,5mm) 4. A base for the base mould of of the thinnest acrylic we had (0,3) I made this using the outside contour of my inflatable base as its inside contour in order to be able to glue one to the other. 5. Two edge frames out of the medium height acrylic, as we no longer had the thicker one available (2x 0,5mm)

I followed to glue the pieces that needed to be together and had both my mould's halves.

The next step was to make the silicone mix. In order to do mine I used the dragon skin Fx-Pro.

With this particular type of silicone the mix ratio is 1:1, which means I need exactly the same amount of both components of the silicone in order to them to react properly together. It also means I had only 12 min to work with the mix and that it would curate in 40 minutes once the initial 12 minutes were over with. I followed these steps in my process: 1. Poured 201g of the yellow bottle 2. Added 201,2g of the blue bottle, which summed to 402,4g. 3. I quickly stirred the mix strongly for 1 minute and placed it in the vacuum chamber. 4. I sealed the vacuum chamber and left my mix inside there for about 9 minutes until all the bubbles, or at least most of them had come out. 5. I poured my silicone into both my previoulsy cleaned moulds. 6. I left them cure for 1 hour just in case. 7. I made another mix in order to glue both sides together, this time I added 15.1g of each colour of the silicone. I repeated the stirring and the vacuum chamber moments and left my mix for 1 hour. This time the mix did not cure. I had to repeat it after I managed to clean as much from it as I could from both my halves. 8. I made a new mix, this time with 25.3g (the total of 30g in the previous attempt proved itself a bit short) of each colour of the silicone. Again quickly stirred it and placed it in the vacuum chamber. This time I used the vacuum chamber for only 5 minutes in order to have more time to spread my mix in my two moulds. 9. I left it to cure for 1 hour. This time it worked. 10. I opened the hole in order to place a tube to inflate my silicone inflatable with, but it turned out my mould was too thick and my channels to thin and I could not inflate it with my breath nor could @nico.tando (thank you for trying tho). 11. The pump was also not a successful way to inflate my design.

Me and Anastasia tried taking out the fabric first and then we even pulled out the base of the inflatable which left a very fine tissue of it on top of the supposed-to-be-inflatable side. Some very failed attempt of mine to fill it are here:

While speaking to Anastasia I came to the conclusion that my biggest problem was how fine my channels were in comparison to the thickness of my silicone. Also another point to reconsider is that I should allow the air more passages and not to need to go through one very long path. My plan is to redesign my channels, unglue the one I have and reglue those on my mould and reuse my base, but make a new inflatable side. I will make sure to cut my channels in the thinnest scrylic I can find in order to be able to make this side as thin as I can.

I then redesigned my channels, first quite unsure of how to make them better connected just adding connection points to 0,7mm channels and then, with @betiana.pavon 's help With larger points, using the thinner ones as the negatives instead of the pther way around (thanks Beti!):

I recutted them, and glued them to the base I already had ofr the opposite side, using the one that previously had the channels for the plane base with tape on the back, as the front had been damaged by the first channels: 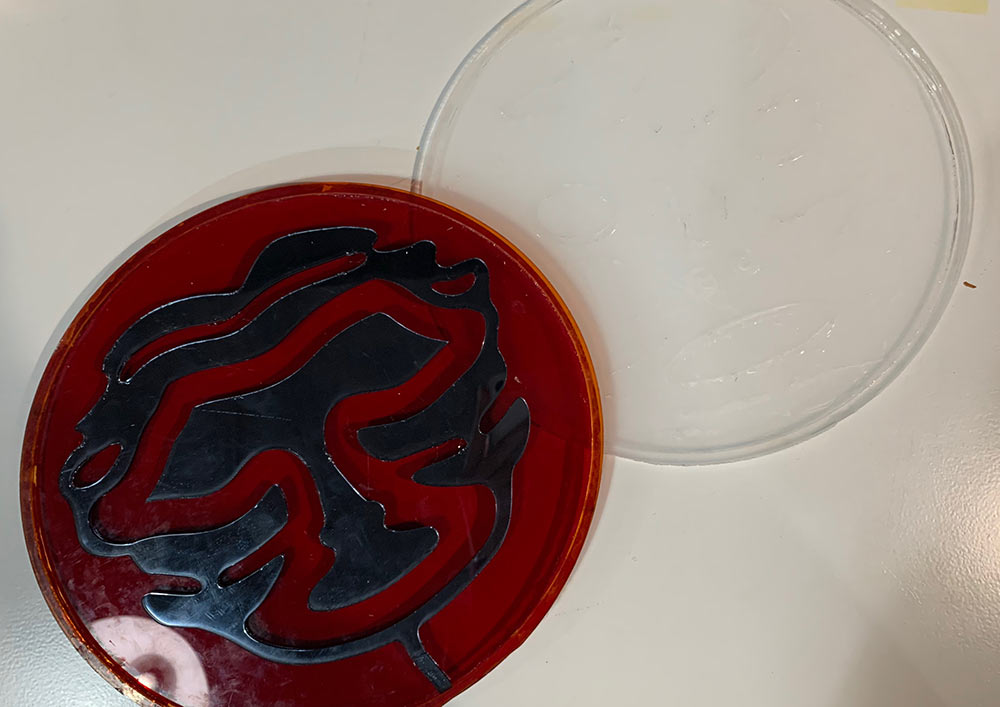 I redid the silicone using dragon skin, measuring my mix very well, but once again it did not cure well. One theory is that I had first poured it into my mould on the cold and this prevented it from curing, the other was that I had not enough time to cure it (3days, which should be more than enough for the dragon skin) because of the cold, the last theory was that the time I used for taking off the bubbles was too long and the silicone mix was damaged after the pouring done after the curing time had started:

I had to redo the dragon skin silicone mix and once again pour it into my moulds with the redesigned channels, this time on the warmest room I could find and not taking off the bubbles, once dry I cut off the nose/eye hole and glued both parts together and added talcum to them once dry:

Me and @loana.flores made a test each out of alginate.

While talking to Anastasia we came up with the following order to follow when actually making the test:

This is how mine looks:

Soft Robot Made of Alginate from Gabriela Lotaif on Vimeo.

The recipe used by @amaya.deyavorsky for making this inflatable is:

Computer Programs Used in this Assignment:¶