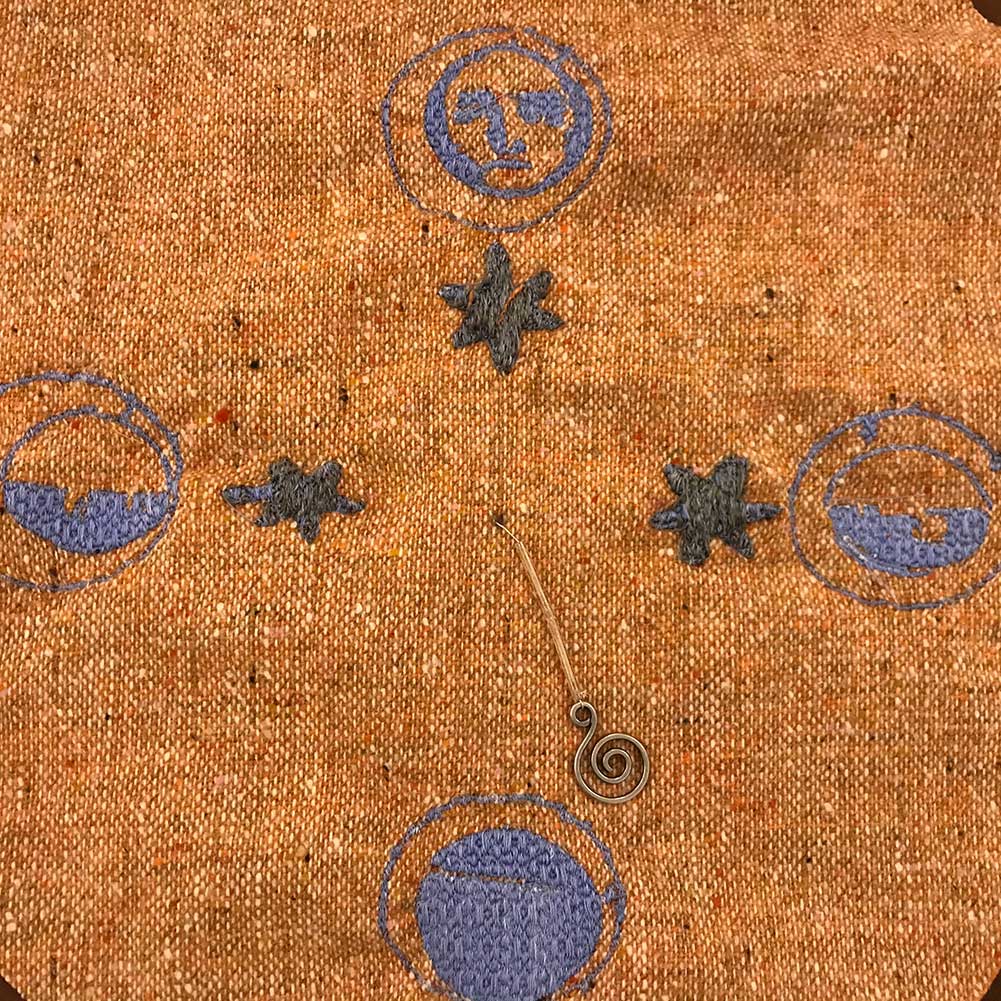 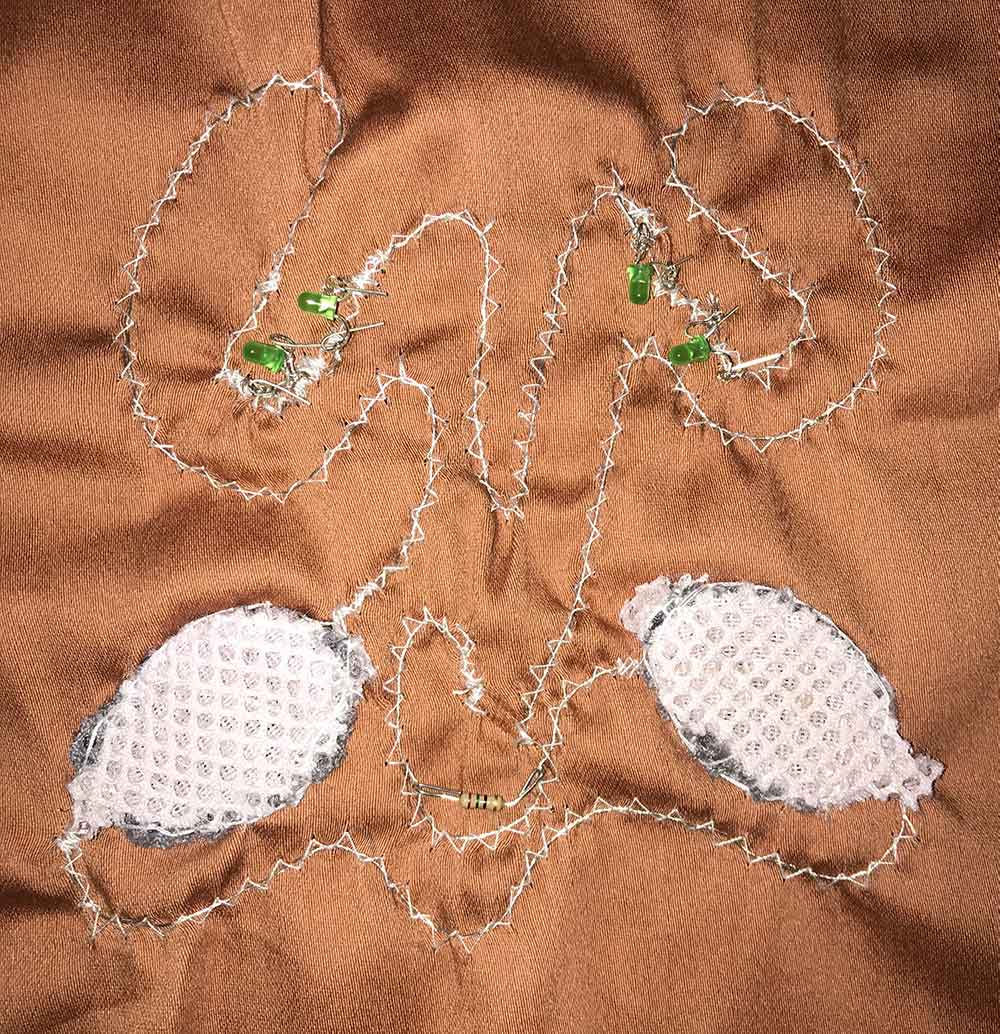 Digital: circuit in which the value of the output is only its standard one. In the case of LEDs the light of the LED wil only be lit to its maximum capacity.

Analog: circuit in which the value of the output can vary. In case of the LEDs their light could be dimmed in this circuit, or blink even, or change colour if it's an RGB led. This range depends on a sensor that allows more or less resistance.

Momentary: switch that turns on while in contact with the circuit and off while not. It needs to be actively kept in the circuit to make it on. (Ex: button you need to keep pushing to keep the circuit on and that once you let go turns the circuit off)

On/Off: switch that can mechanically keep the circuit closed on its own. (Ex: button that you push once and circuit is on, and can only be turned off once you push it again)

LEDs are great friends to learn electronics. They show you if a bettery is working with just a touch, they help define the concept of + and - of a circuit. + is where the energy first flows to (LED's longer leg). - is where the energy is grownded (LED's shorter leg).

Series Circuits: Series LED circuits are built with the + leg of LED1 connected to the - leg of LED2, and its + connected to LED3's -... This means that the voltage of the battery needs to be the sum of all LED's voltages in the circuit (I is the same independently of how many LEDs are in a series circuit)

Parallel Circuits: Parallel LED circuits are built with the LEDs connected in a row, with the +s in the same side and the -s in the other, with just LED1's + and - touching the battery. This means that that the current of the circuit is the sum of all LEDs currents (V is a constant in this case)

Allows The user to measure voltage, resistance, current and many other essenctial measures of a circuit.

VOLTAGE: I tended to measure voltage using the beeper function, it's an easy way to check it. This will indicate if your circuit is properly closed or there are any short circuits on it's construction.

RESISTANCE: point the wheel to the ohm sign. This is very helpful to test if an analog sensor actually allows the user different levels of resistance.

The language of the electronic circuits is called schematic. Some examples of its symbols and their meanings are: 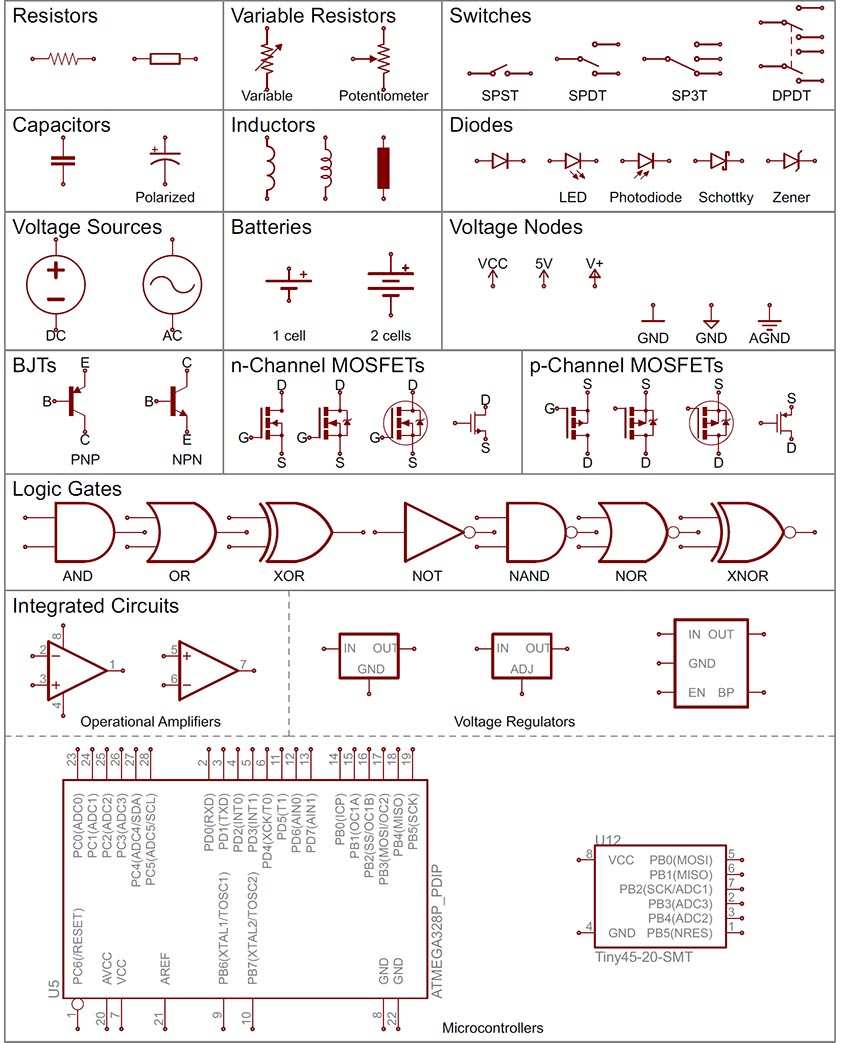 In order to learn the very basics of Arduino we did some experimentation with and arduino UNO, a bread board and an LED. We did both a digital and an analog circuit (with a button) and learned a bit about how their codes worked.

The first thing we did in Arduino was to identify what board we had. Then we started playing with the codes.

In arduino you can find the most basic codes ready-made and edit them to your positions according to how you set your UNO board.

This is my digital test: 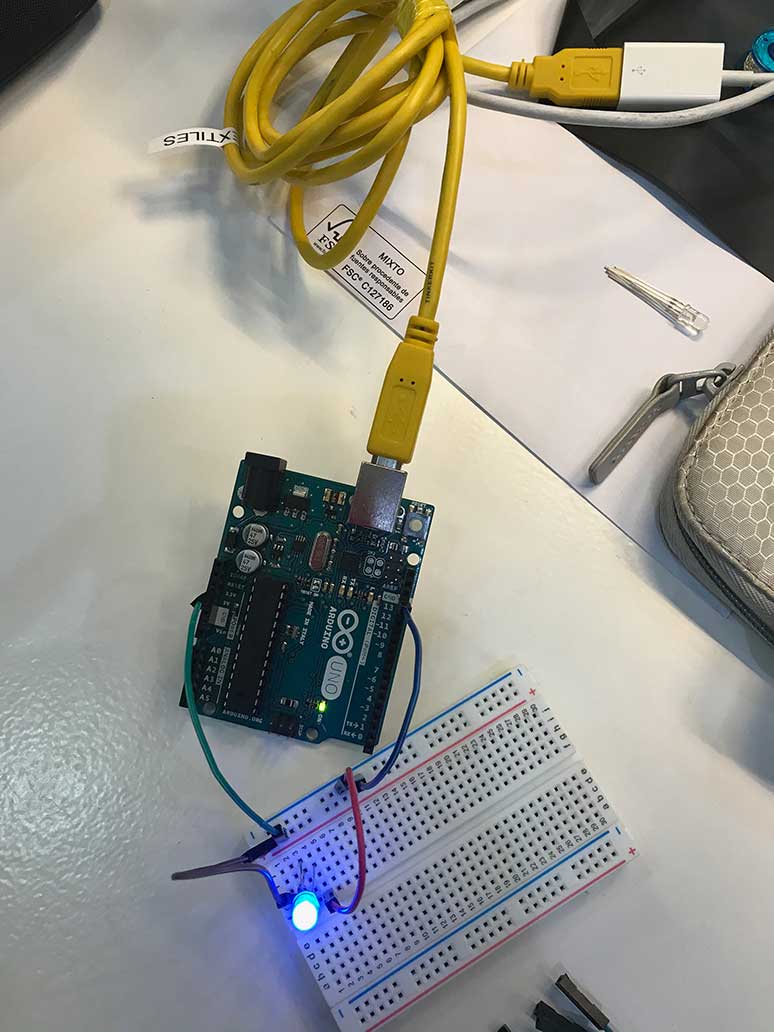 This is my analog test:

First tests Arduino for E-Textiles from Gabriela Lotaif on Vimeo.

We were given many examples of soft conductive materials:

I was insipired by the moon phases in order to develop this circuit. I especially looked at the moodboard I had presented on my State of the Art documentation in week 1

I especially focused on this image: 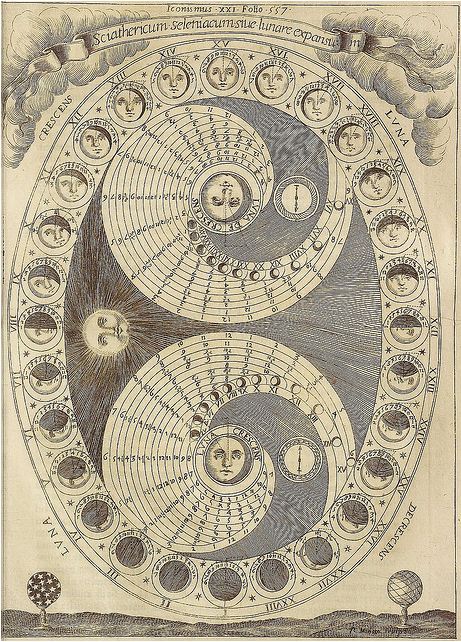 I started designing based on my inspirational image. I first designed the circuit I wanted in schematic language:

As you can see my first sketches were very ambitous, I had 28 moon phases and I had the idea of making two different types of circuits in the same embroided pattern of theses phases.

I first realised that that would be impossible to achieve in a week's time, as it would require great though in the intersection of both circuits and on how to connect them to the LEDs' +s and -s.

After deciding to do just a simpler series circuit with a toggle switch as a + that could only light up on LED at a time I had to draw my embroidery and understand what would be made in conductive thread and what wouldn't. I started my drawing from the 28 phases of the moon.

I traced the image on Illustrator and manipulated it intially in Rhino.

I prototyped my simpler version of the circuit with just 4 moon phases, one of which would not have a LED (new moon, no light), and would thus be the original positioning of my toggle switch.

For aesthetic purpuses I divided my circuit into 2, the embroided moons and their star switch (only part embroided with conductive thread) and the underlayer with the actual continuation of the circuit itself.

I was able to embroid my digital circuit in Eurecat at their Canet De Mar workshop with the technical embroidery machine, that could feed a (conductive) thread around which it embroided a regular thread.

Embroidery for E-Textile from Gabriela Lotaif on Vimeo.

I embroided the three stars' conductive threads to the circuit's (with the LEDs too), keeping the LEDs +s facing the centre to receive energy from the toggle switch and the -s I connected in series leading to the battery's growd with the interception of a 150Ω resistance that would serve for all LEDs, each at its time.

I then finally sew the + of the battery to the top fabric, aisled it with two non-conductive beads and finished it with a metal (conductive) bead to the size needed for it to rotate to all three stars and close the circuit with one at a time.

In order to calculate my resistance power i had to consult the Datasheet of the small green LED that i used, that gave me the following details: * 1.8-2.2VDC forward drop * Max current: 20mA Suggested using current: 16-18mA Luminous Intensity: 150-200mcd

I developed this second circuit based on the Brazilian Folkloric myth of the Onça Celeste, a Brazilian feline that has the power of lighting itself with the moon's luminosity (amongst many deeper aspects of its myth).

As I did with the Digital Circuit, I also started my design with a schematic drawing. The eyes of the Onça are LEDs in a series circuit that would be dimmed by the manipulation of the Onça's whiskers.

first I wanted to use the stroke sensor. I then realised that the stroke sensor was actually more apropriate for a digital circuit, in fact that it was a switch not a sensor, so I changed my design.

The second sensor I thought of using was the stretch sensor. I wanted to make the Onça's whiskers out of stretch sensors, that when pulled would light the LEDs more. I then understood that the stretch sensors had to me attached in the beggining and end, which then meant it wouldn't make sense with my design.

Instead of changing my design I finally decided for the pressure sensor.

This time I was able to shape it to the format I wated it to look like, so I ended up going for a conductive thread-based embroidery.

I manually copied my design to the base fabric and used a home sewing machine to zigzag stitch on top of the conductive thread. I then left two holes in each eye for the 4 LEDs (making sure to keep enough conductive thread in each of these ends so that I could attach it to the LED).

I then hand-stitched my LEDs to the circuit.

!!! Make sure both sides of your push button’s only touch with the velostat in between them or the reading of the values will be all wrong.

I had to remake my push button adding a separation foam with a whole in the middle for the connective thread to touch the velostat after having this issue !!!

I decided to add two of these press buttons so that the lighting of my LEDs could be manipulated more interestingly by pressing one, the other, or both. I also considered my design in order to do this.

I then attached the 4 LEDs (2 in each side) on the place where the “eyes” of the onça celeste would. This is a series circuit with 4 LEDs that require a 2,2V power each to function, which summed up to 8,8V needed, the reason why I decided for a 9V battery.

Before finishing my circuit in order to read its resistance variability I added a 15Ω resistance to it, in series with positive side, before the adding the sensor to it. This resistance performs as a pull up resistor. The function of the pull-up resistor is to allow the reading of the analogue values created by my variable resistor (the velostat intercepted push button) by the multimetre and the arduino. I first tried an 82Ω resistance, but that was too high and wouldn’t allowed me to read the values as well, I followed to make my way down in value of resistances until I decided for the 15Ω one

The next step was to check all of my circuit with the multimetre and measure with it the variability of resistance generated by my push button. 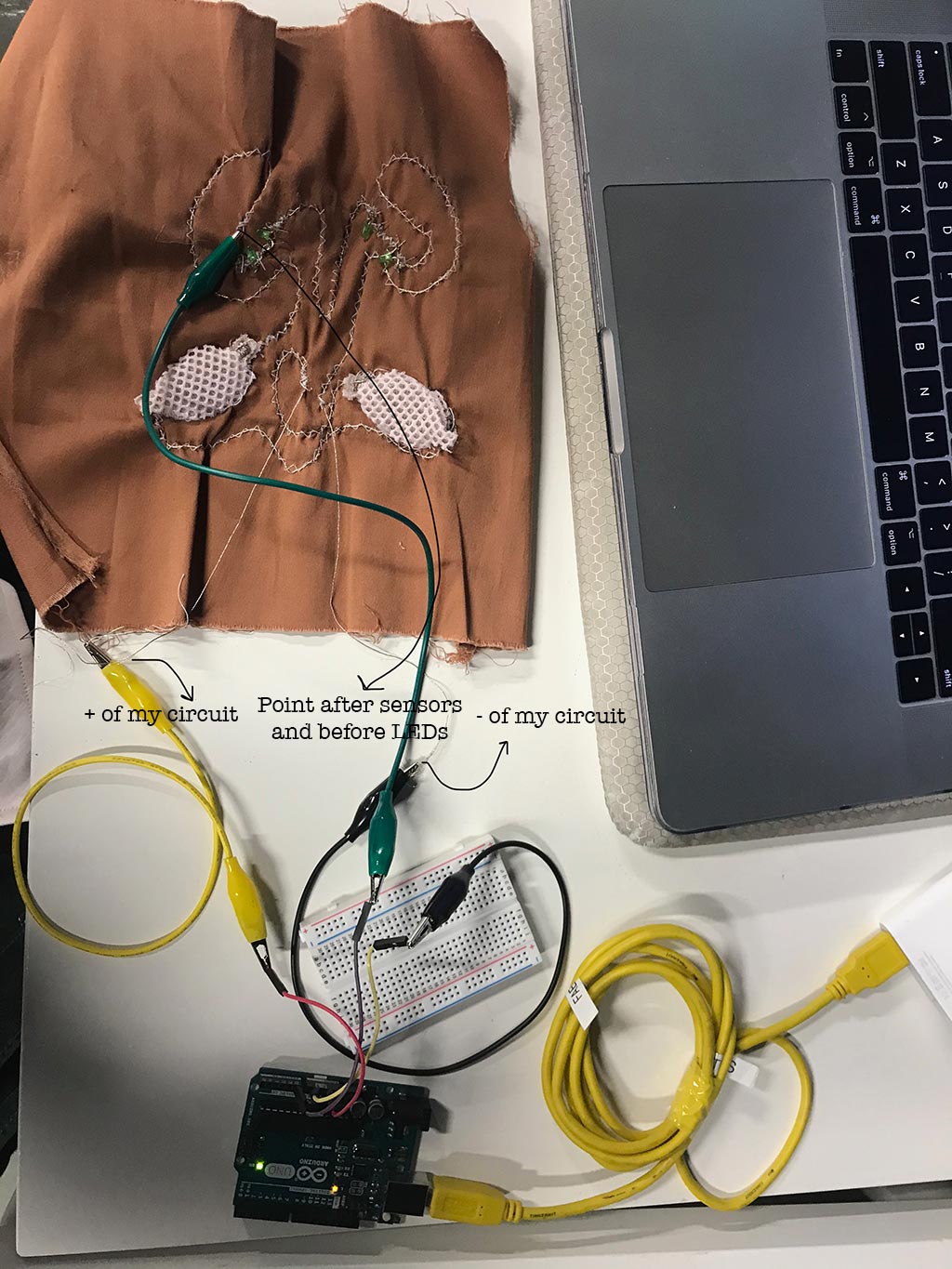 I plugged my arduino into my computer and used this code:

I, then, read the values with the serial plotter tool at arduino and made sure all was working fine.

At this point I noticed that despite the whole circuit working well and all LEDs lighting up with direct +- connections my circuit was not yet lighting my onça’s eyes. After a very long time trying to figure out what went wrong, testing every single thing I realised I was not giving the circuit enough power to light up the LEDs with my arduino, as it would only give it 5V

I finally had my circuit up and running with an analogue sensor defining how much my LEDs would light up once I connected my + and – to a 9V battery. 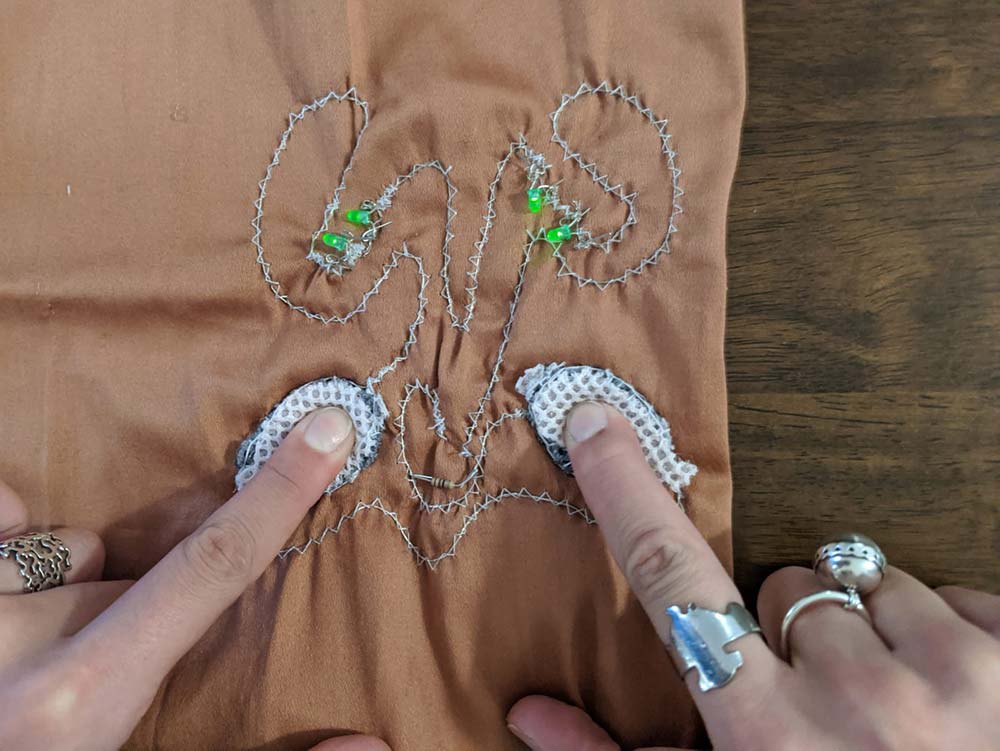 Computer Programs Used in This Assignment¶