Considering both my general practice as a costume designer as well as my aim with the final project which is create a skin-seeming garment made of biomaterial that reacts as a skin electronic in some levels I decided for the mask exercise mixed with the makeup one as my project for this week. 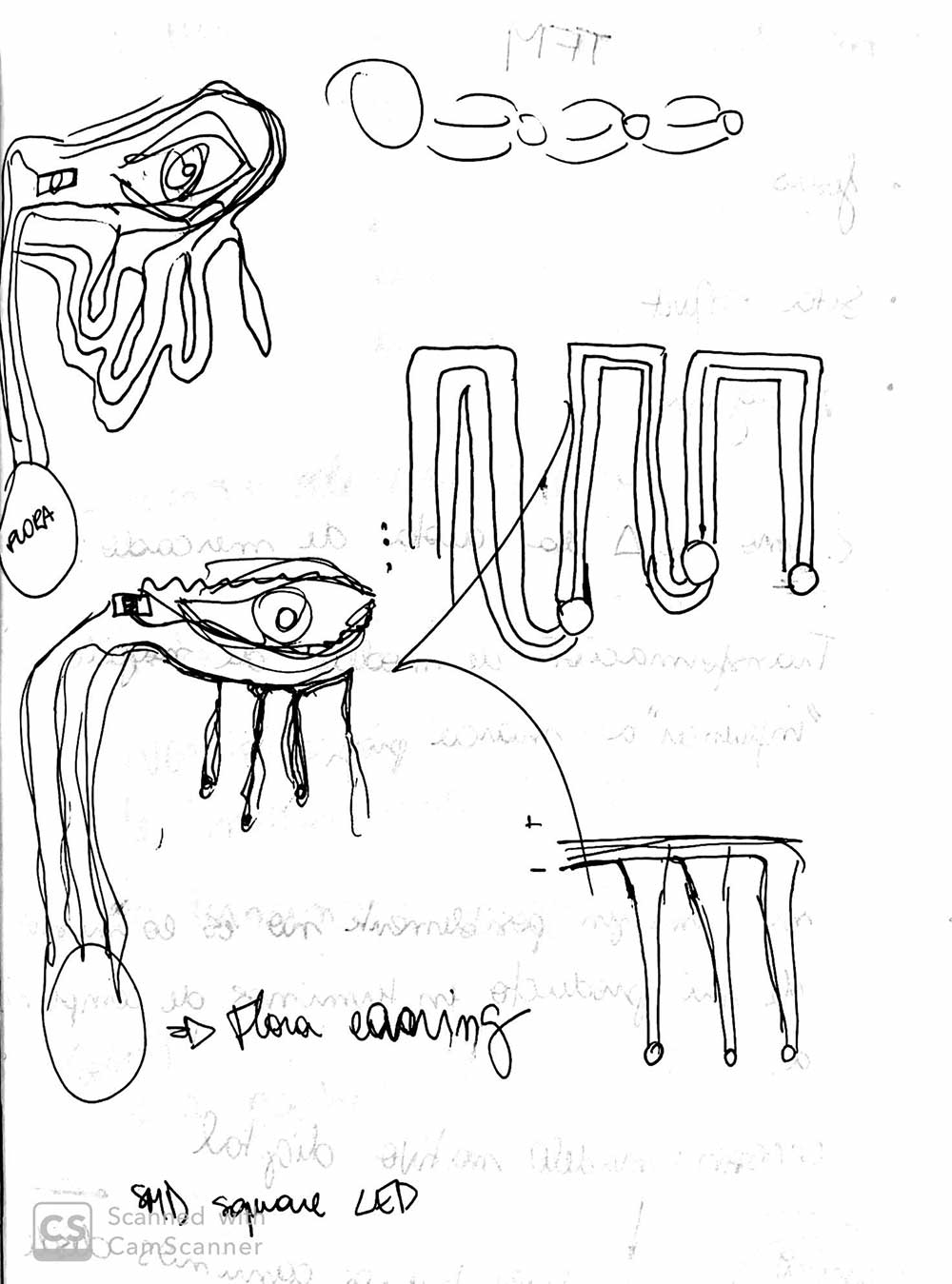 Failed attempt to use mini RGBs¶

My intention was to use the LEDs on the neopixel strap but pulled out of the strap, because I wanted the tears to be quite small, but to light up one at a time.

I started by trying out the strip to see if the leds on it were all okay:

When I made sure they did, I cut them out and took them off of the strip, I then understood what pin coming out of it served for what based on this link: 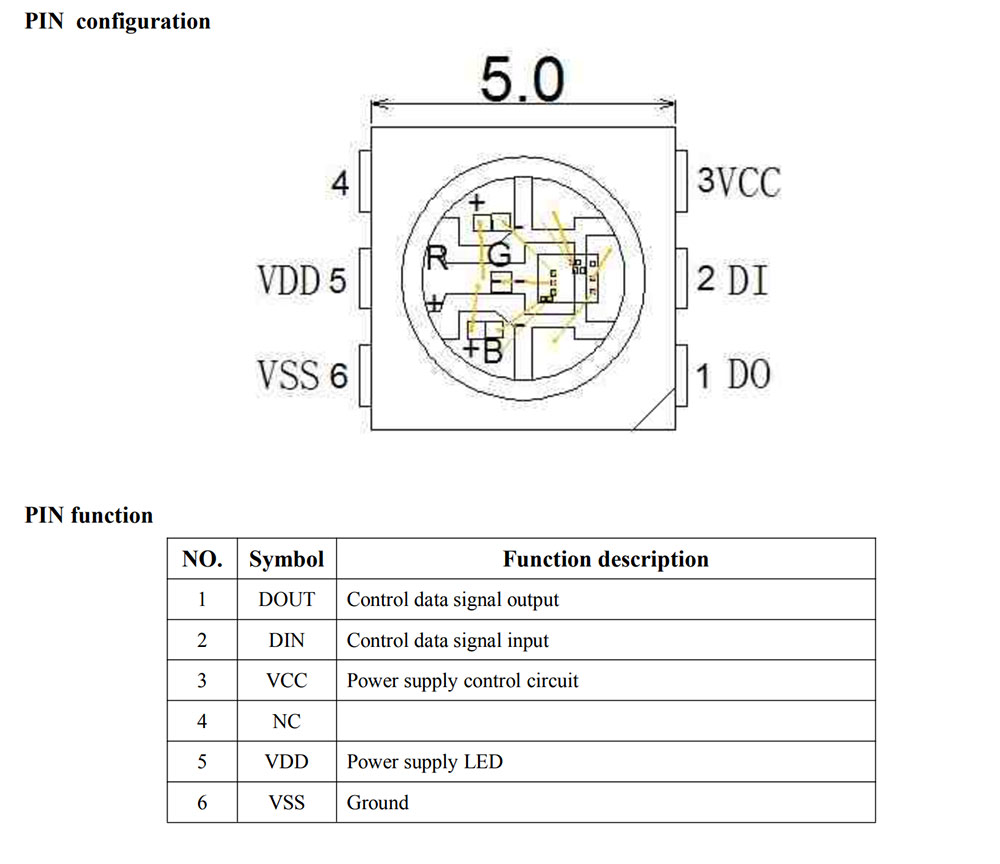 I then tested it out quite roughly with the Arduino Uno still and it worked, but with quite weak lights:

But once soldered to the copper cables and connected to the Arduino Uno they no longer worked, however the current did go throught it. 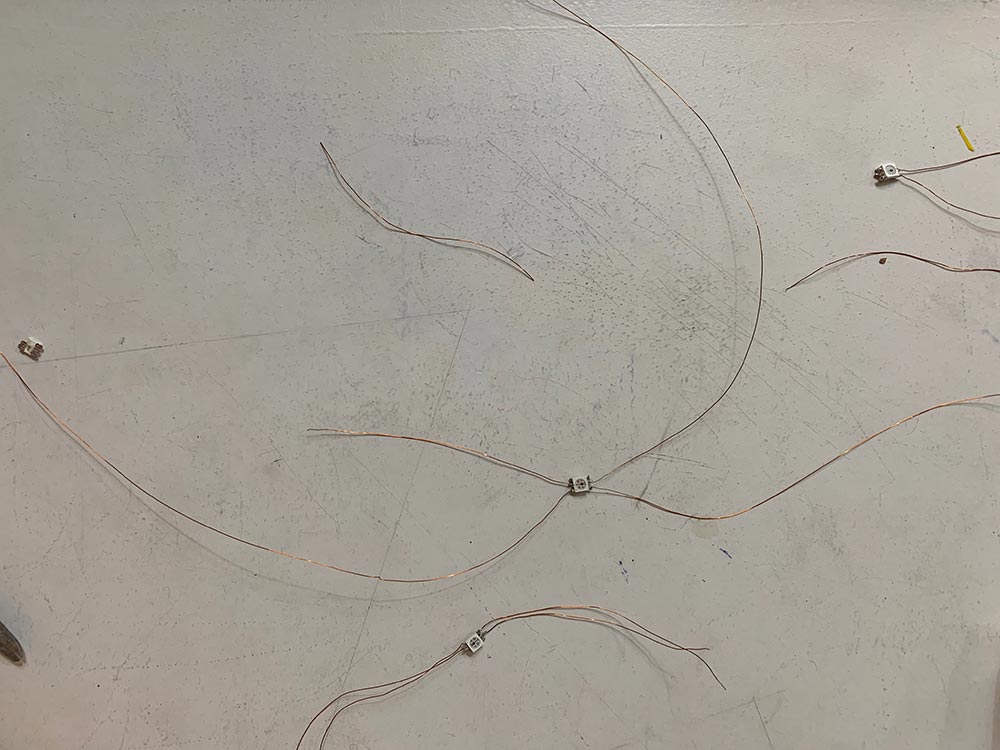 After my failed test I decided to in fact use the bigger Neopixel RGBs, as they would still make sense, just would need thicker tears constructed around them, which would lead to a bigger outcome averall on my make up/mask piece.

I first tested each of my Neopixel RGBs with my Arduino Uno using the Neopixel library strandtest:

Soldering Neopixel RGBs Leds together in mind of the design¶

I followed to construct my small circuit that woukd become my skin electronic in face of what my design was. I did this by measureing the distance of the RGBs in my cheek and calculating the needed measurements of the 3 connecting copper cables that I would solder on the LEDs. 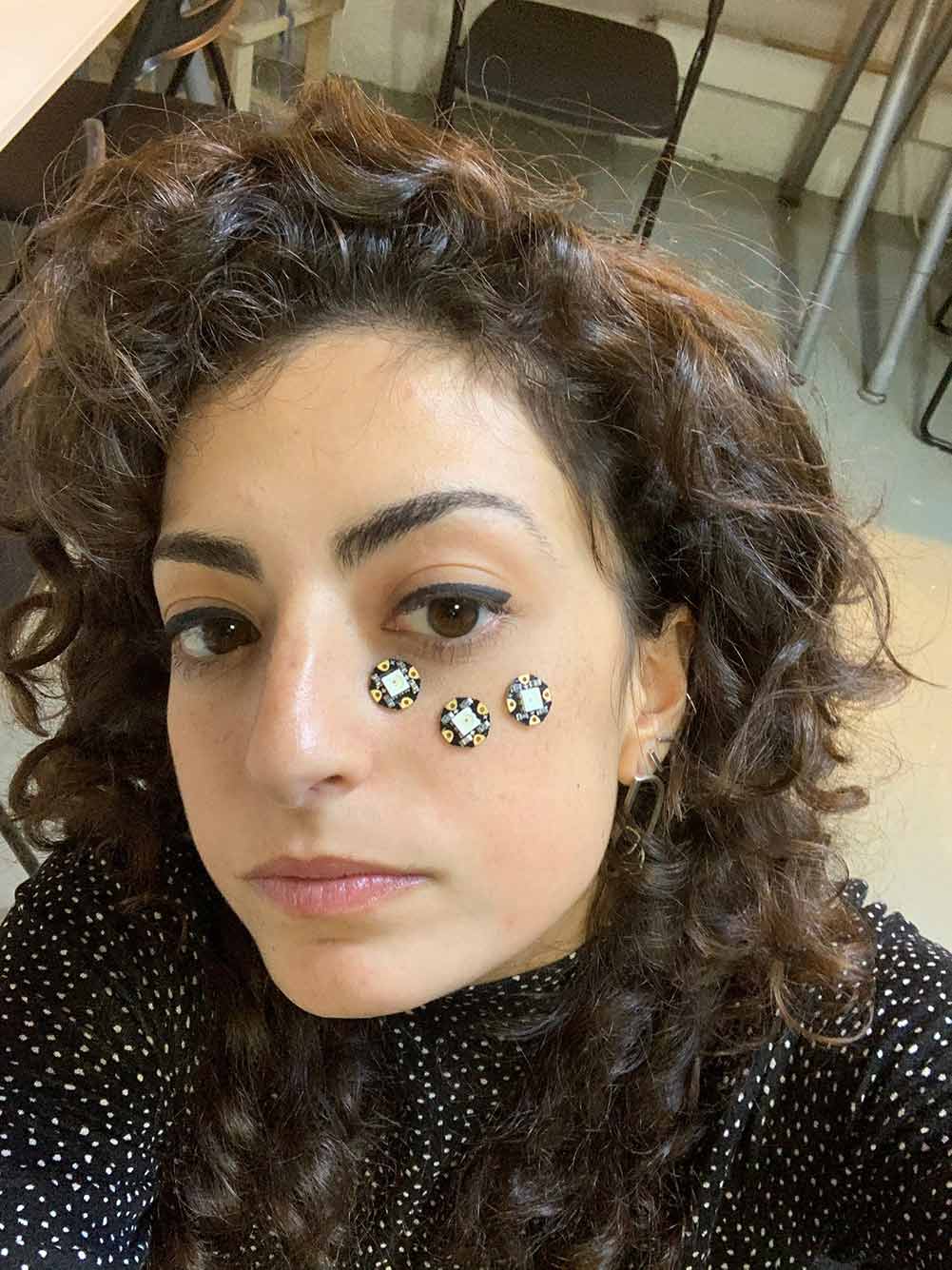 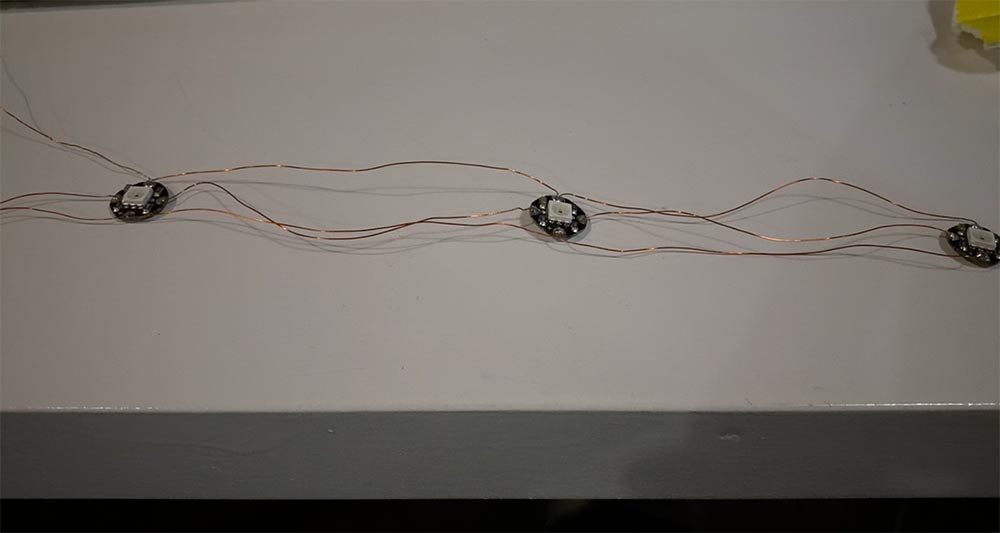 Next Step was to test them with the Arduino Uno, still using the starndtest library taken from the Neopixel examples:

I fist connected my Flora to my circuit and tested if if actually worked.

Testing Skin Electronics circuit with the Adafruit Flora from Gabriela Lotaif on Vimeo.

Once sure that the Flora would work I soldered the circuit onto the Flora.

The use of the Flora was thought based on the options I had and on the aesthectics of it hinging out of the ear of the user as a rounded earring as per my design.

I programmed the code of my circuit to light my LEDs up one by one, starting from the one closest to the nose, in an orange tone to make it match the colour of the material I used to construct the RGB-LED-envolving tear. I used part of the strandtest library to base my code in and partially pogrammed it myself.

This is the final code:

As mentioned before, I decided to program the light of the Neopixel RGBs to be orangy/red in order to make them match with the colour of the pine resin that I was to insert the LEDs on.

I first envolved the RGB Leds in pine resin mixed with tapioca starch (meant to stranghten the resin once dry).

I boiled the pine resin and once melted I added the starch to it, In this process I used the documentation of Lara Campos' from last year, all added in the useful links bellow.

The issue I had, and that Lara had anticipated to me, was that despite the addition of tapioca starch my final outcome of the dry resin was still very fragile, and broke once I removed it from the acrylic base I had used to pour it on the LEDs.

This gave me the idea of leaving the resin only around the LED mainly for colour and aesthetic puposes and finishing up my tears' format with a silicone glue gun.

This is the result I achieved: 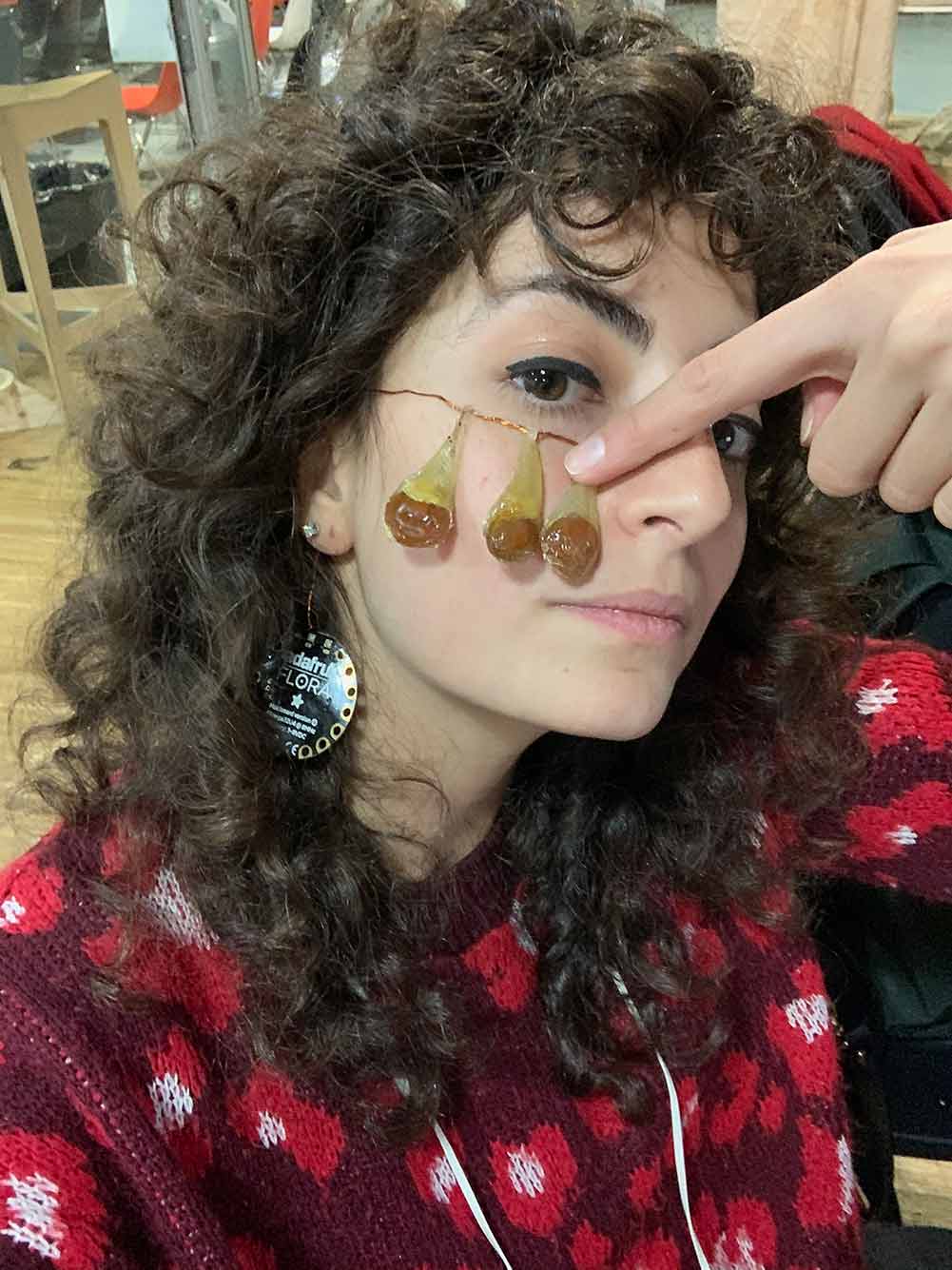 I glued transparent micropore to the back of my tears to be able to place them on the face one my skin slectronic was fully functioning, in order to do this I used a craft contact glue:

The design also affected my choice of battery. I first decided to power my skin electronic with the 3V battery glued to the back of my Flora. In order for this I bought this 3V Battery power reader and switch 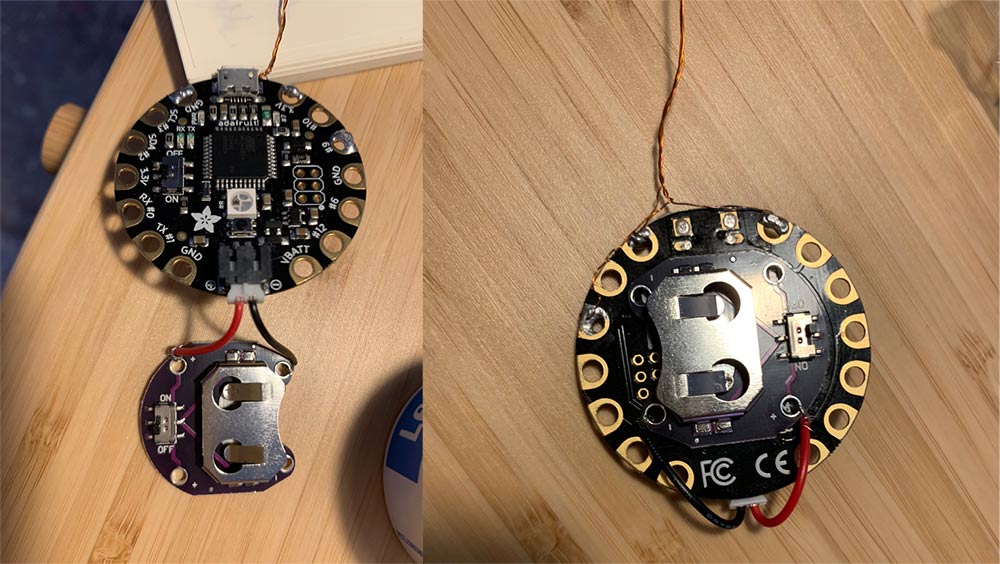 Battery issues with Skin Electronic from Gabriela Lotaif on Vimeo.

I then connected it to my circuit, but the 3V battery proved to not be enough power for my circuit, so I decided to change it into a dyi version of a 9V battery, made out of the union of three 3V batteries in series, similarly to what this video shows:

My version was constructed with black tape, not thermal rubber. I then attached it to the back of my flora and the switch in the plugging in or out of the white connector:

This is how my skin electronic looks: