I am still on the process of defining the mapping of the body in order to decide which parts of my skin will be hard materials and which will be soft materials, but I have used these medical and energy-based body maps as references: 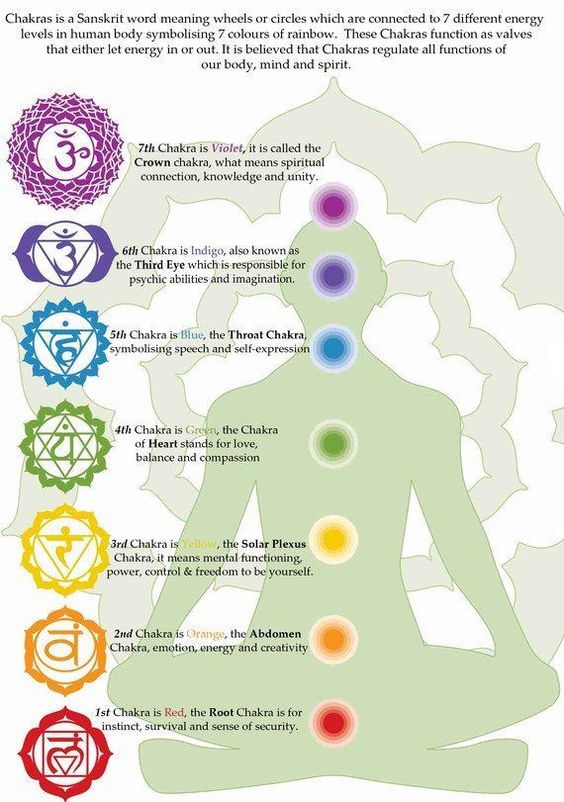 I am also bringing the discussion of the ability of the female body (especially) to nuture, which led me to referencing the female body in gestation on the mapping as well, but mainly for the purposes of defining quite clearly where the nuturing imagetic would reflect on the non-gestational body.

I started the mapping of the body for Dar À Luz based on the 3D scan of myself naked, in order to be able to actually work with a real body and its natural proportions.

Many many thanks to @ana.correa who in fact was the person to scan me, as for it I had to be standing still in position you see on the gif above.

The step by step we used, referring back to my documnetation in Digital Bodies yet doinog the scan manually - Ana did it, not the robot - was:

This process required a lot of both mine and Ana's bodies, it was very precise and slow, and we had to pay full attention to the momento of the scan while performing it, which in fact made me think it is a performance on its own almost.

In the end of the scan I also cut out my head in order to reduce the file as much as possible to work with it on Rhino:

I am not going to publish Moon's body scan for ethical purposes, I have done with my own as I am the only person who owns my body (if so, even) and can take the file down at any moment I please.

I am however allowed to share images of it here.

In order to scan Moon me and @ana.correa (thank you so much again!) have done the exact same process as when we had scanned myself, the only difference is that we prepared Moon to wear tight clothes for this previously and she was in tights and a thin jersey when the scan was made.

Also what happened, very unluckily, with this scan was that 2 times in the middle of the laps around Moon her body was lost from the centralisation tool in the kinect, going red on the computer, and the scan was lost halfway thorugh, but well, three times a charm. For this reason when we took the scan that finally worked we decided to do it from a very far distance to Moon's body, to make sure we had enough space to move around her and re-centralise her if needed, which ended up in the scan being not only of her body but of certain objects in the room. This was easy to solve once the file was in Rhino as I just had to use the boolean split tool to delete the extra objects in the sacn, but it did make the file much heavier to export, which took a lot of time. This is how it looked before I cleared it: 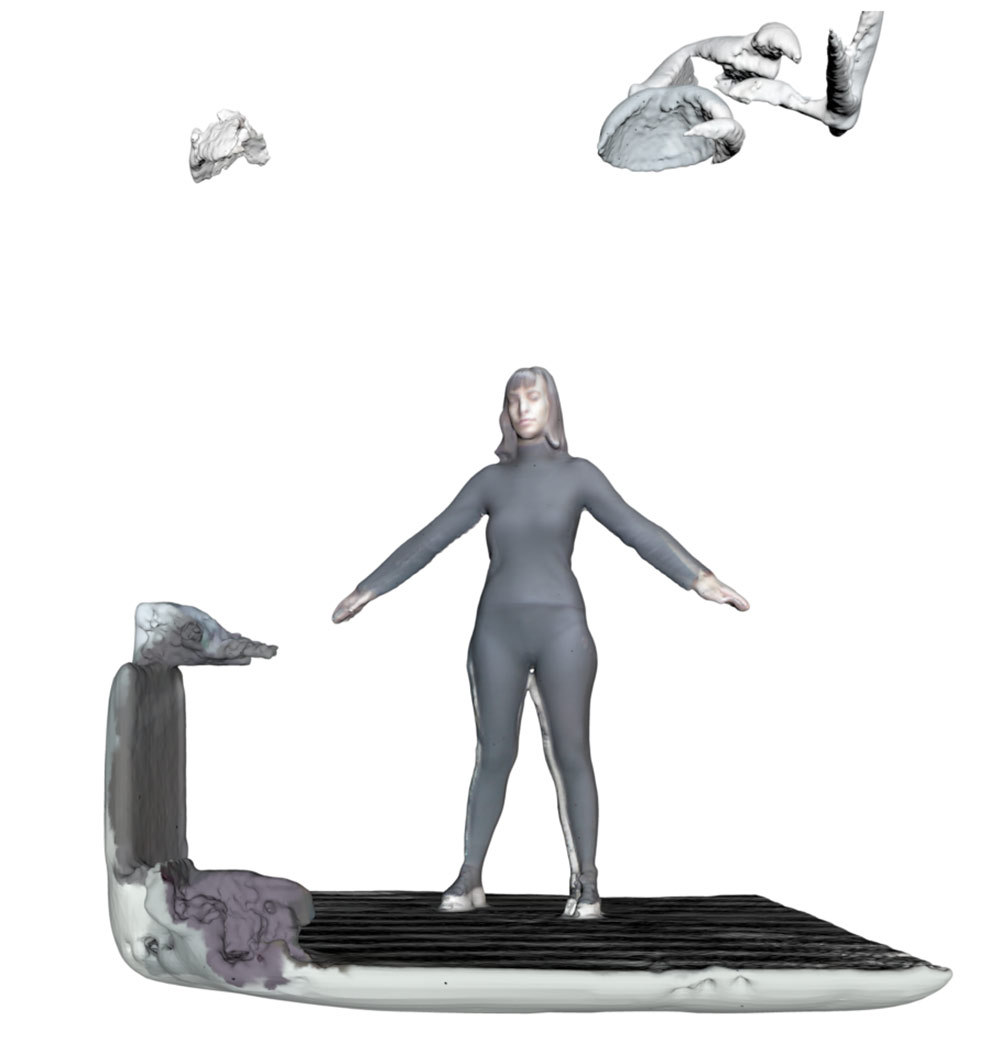 And this is her body scan without all the other object's noise: 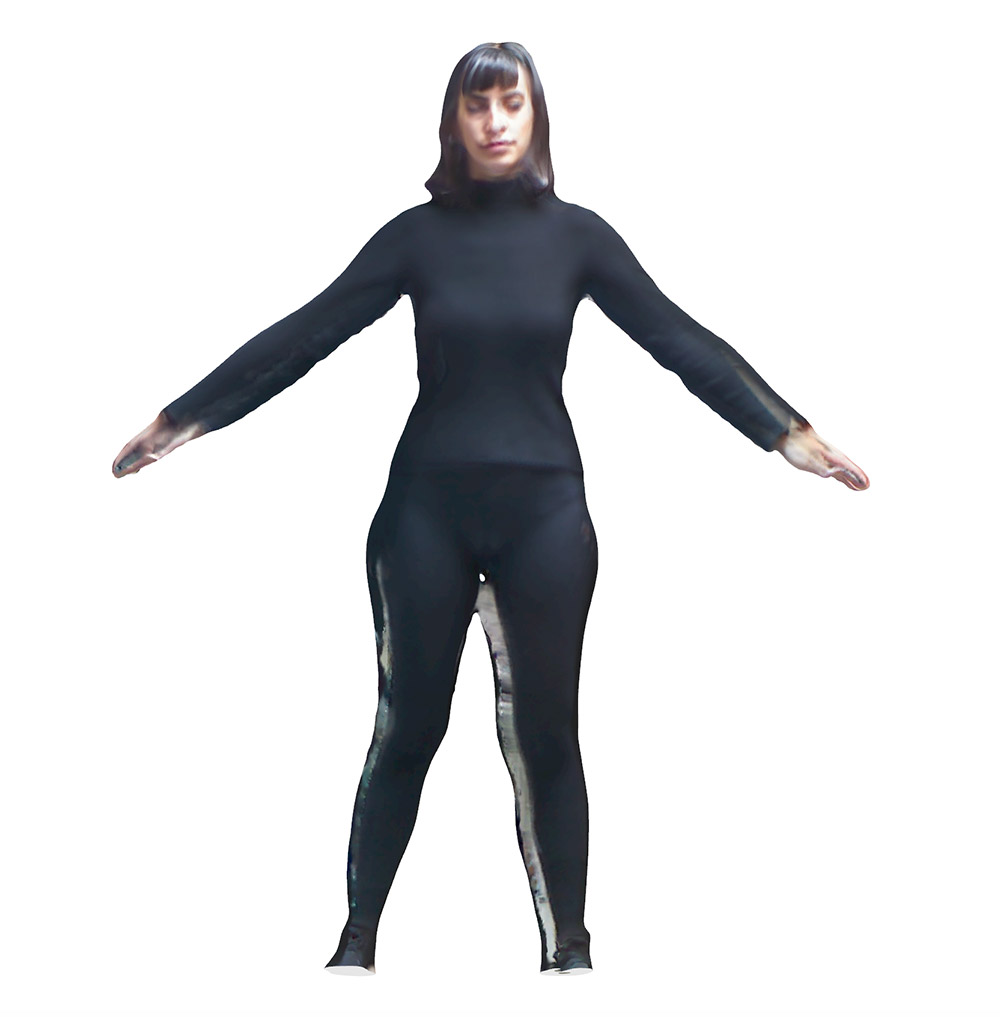 I also cut out her head in order to use the file as reduced as possible: 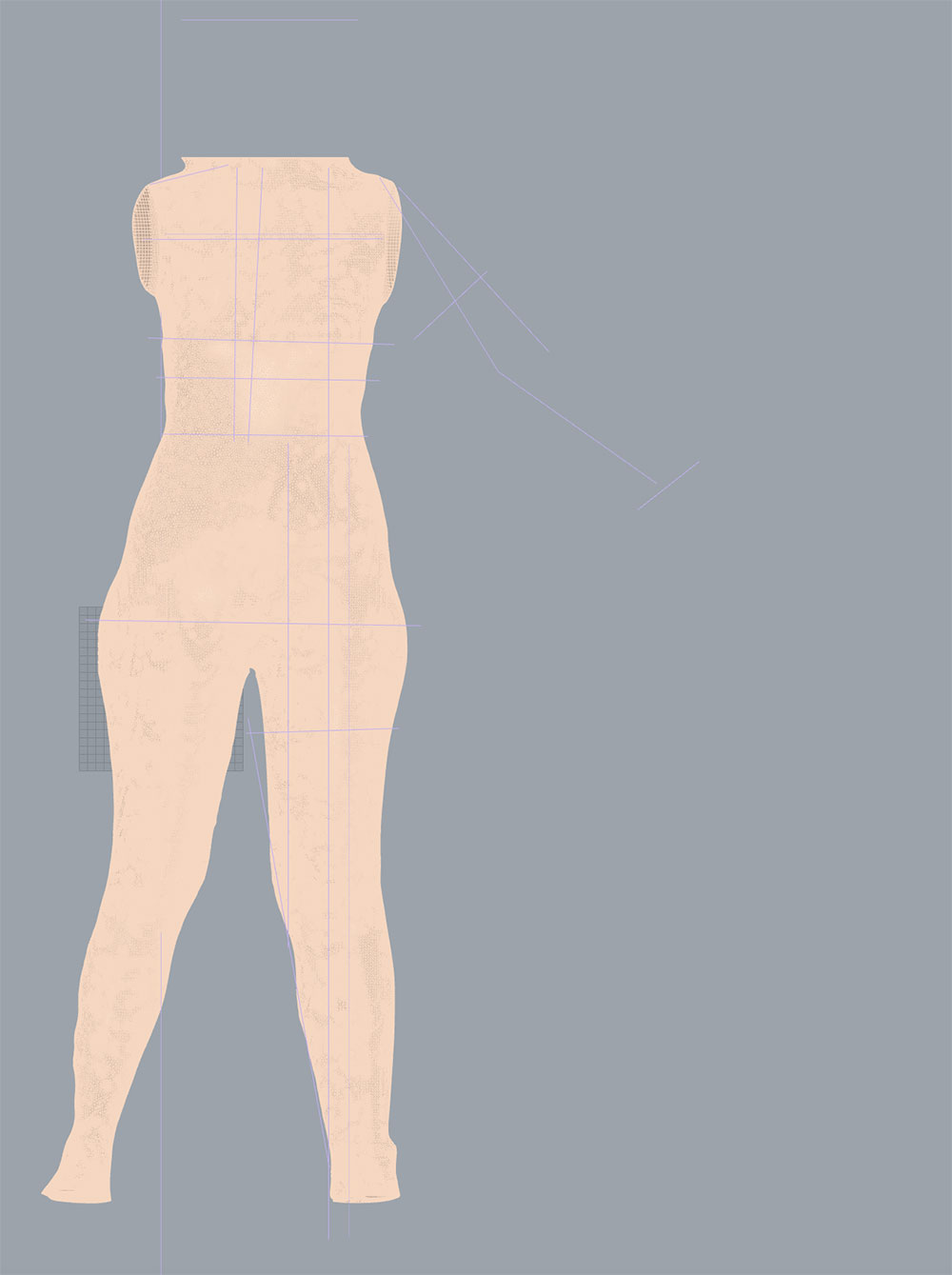 The ReduceMesh tool in Rhino also became my very best friend in this project.

Having all of the Body Scans I needed to work from, it was time to finalize my decision on what parts of the body exactly I had to 3D Model in order to eventually print my exoskeleton and what it would look and feel like once printed too.

I started thinking about the references I had for body mapping, documented above, and also started testing out the movements as documented previously in Bioflaskin, and realised that the exoskeleton was really supposed to be placed in areas of the body with more bones than flesh.

I also thought to use the concept of the chakras and energy centres in the body in order to narrow my options down further.

Lastly I brought into my decision the weight of the whole function of a skeleton, which is to really hold up what otherwise would e a bunch of skin and organs (of Bioflaskins and Algdresses), they should be the base of the weight structure, the legs in which the laboratory created body I was making would stand.

I decided to have 4 pieces: 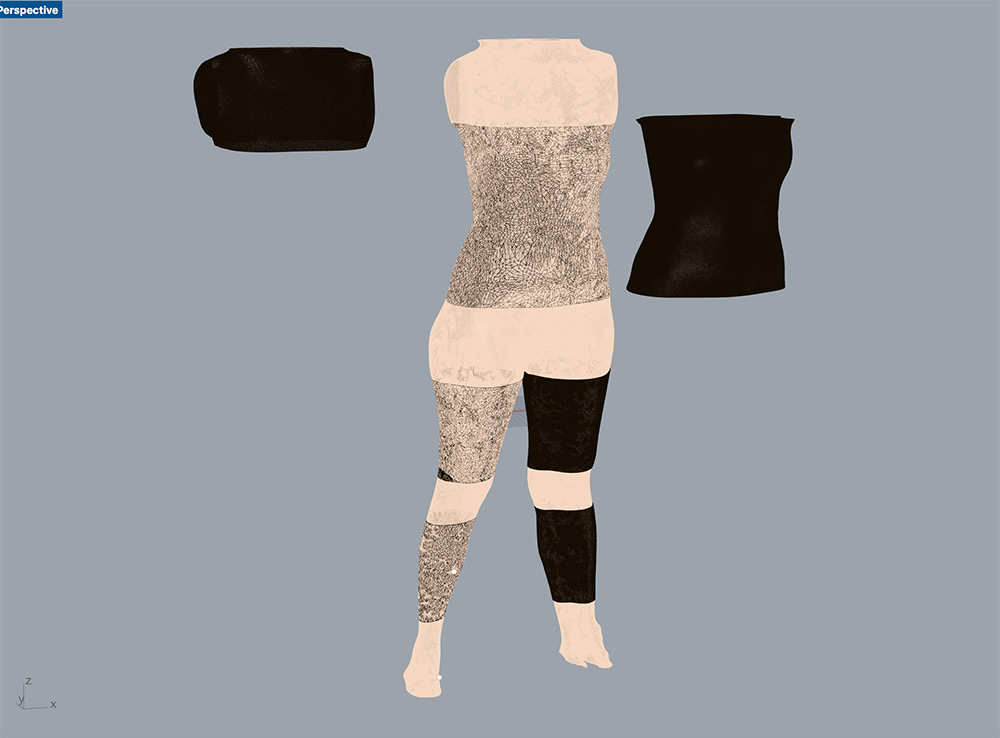 From my own body scan I modelled an initial version of the neck piece to test out how it would feel in my body in case I decided to print it in one piece, if the lack of movement would be too overwhelming to the performance. 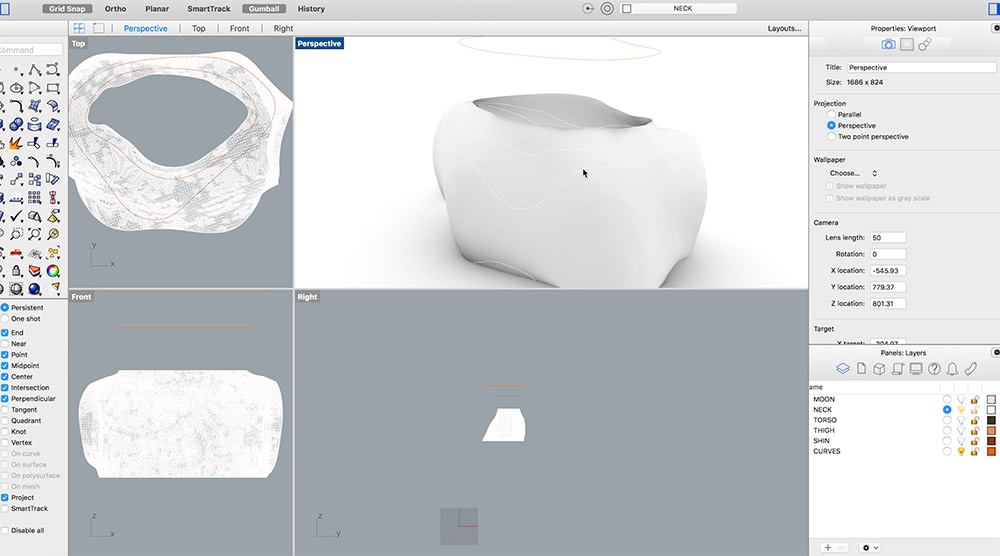 Before printing, however, I decided to do so in smaller scale, as have a paper version, cut out in the vynil cutter (Silhouette CAMEO) for which I would have small cut-outs of my 3D model, that I obtained through the Smash function in Rhino, which takes a 3D object (once cut out in many small ones in the case of a very organic and curvy one like my esternon's scasn's cut) and turns it into a series of 2D ones.

I then printed out a smaller scale version of it after changing a couple of curves' angles in the cut:

I used the same settings as I had for the seringes, which I printed for my Veinginate research.

Having this small scale piece I could see that I had to think of a way to make it move movable, and Anastasia suggested creating small vertical cuts of them and lacing these together, which I actually really liked and decided to do, as an initial version. Then once I was more comfy with grasshopper I could try to make other shapes to cut those pieces in. Aldo Solazzo in our Midterm presentations also gave me the reference of Textile the Skin, a project that he had in the Reshape17 competition by the designers Mingjing lin, Yingjun Li. (thanks ALdo!)

When it comes to manipulating the 3D Body Scans on Rhino I received an initial saviour class from Mohamad Atab (thank youuu!), who helped me understand how to make cuts of the body only keeping its shell ( I dind't want to work with the filled 3D meshes I got from the 3D scans, since I needed to actually print put an outside exoskeleton to them from their surface to the outside).

Using Grasshopper we sorted this need with this series of commands:

These were my 4 base outter shells:

I converted the from meshes into open polysurfaces using the MeshtoNurb command in Rhino, so the next part was easier.

After all these steps I went back to Rhino and need to cut out, from those outer shells I had, my actual pieces' shapes. In order to do this I:

These were my still open surface pieces: 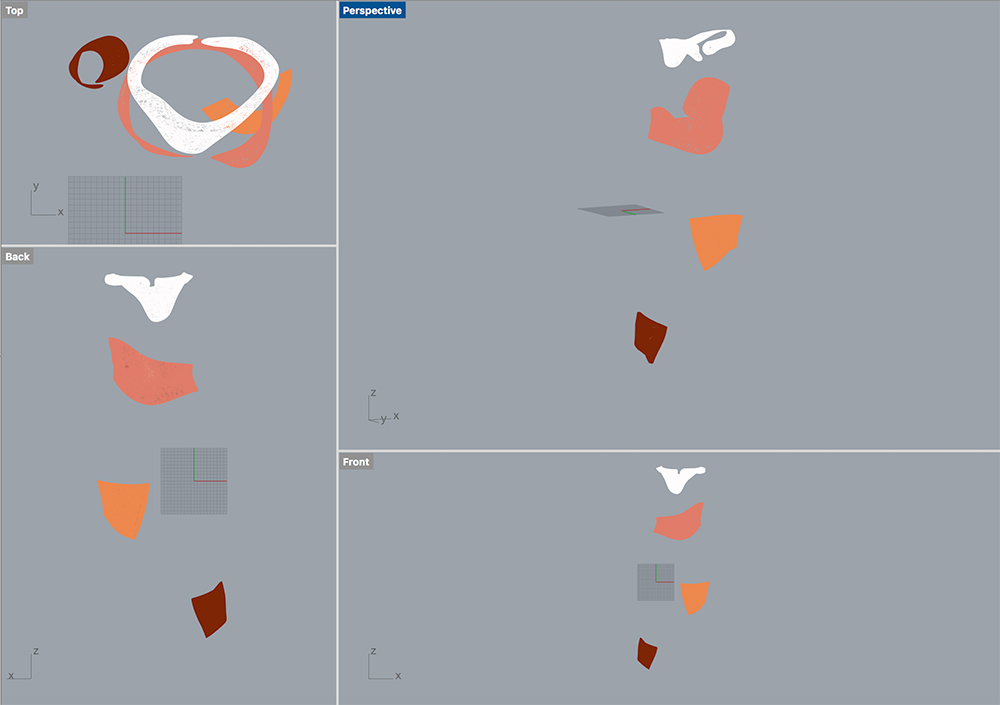 The next step was to cut out the holes in them, as I had included in my designs when I also changed my Algdress's pattern. These cuts were done in the same way I had done the one in the front (neck piece) and back (torso and shin) apertures of my pieces, I made curves on the view I would trim them from. 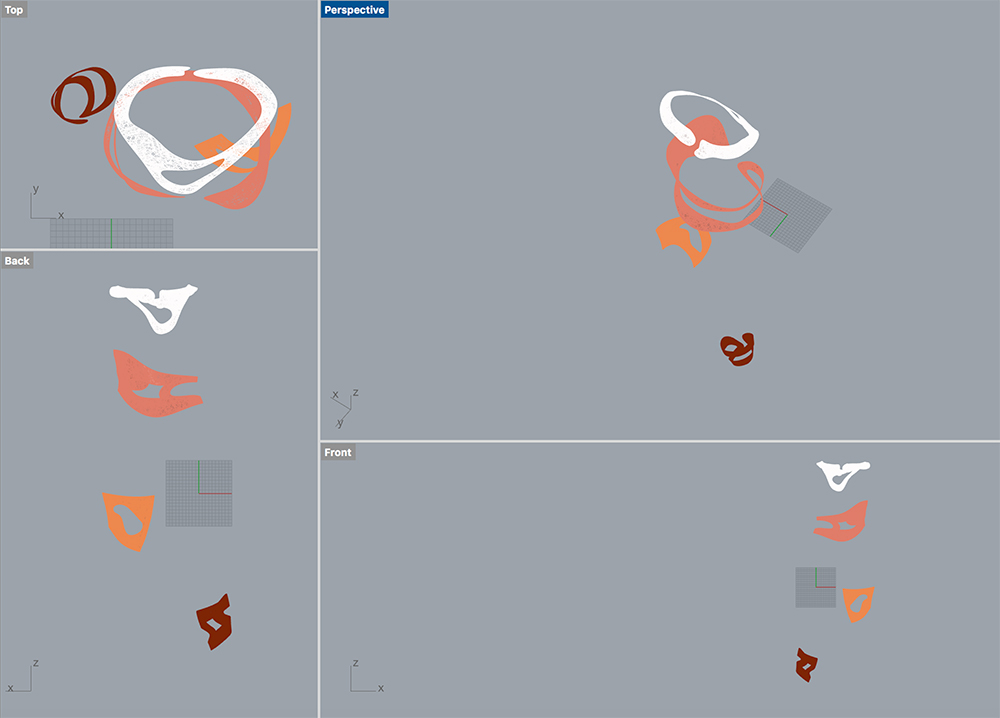 Then I made the vertical cuts on my pieces, which I made all in top view. 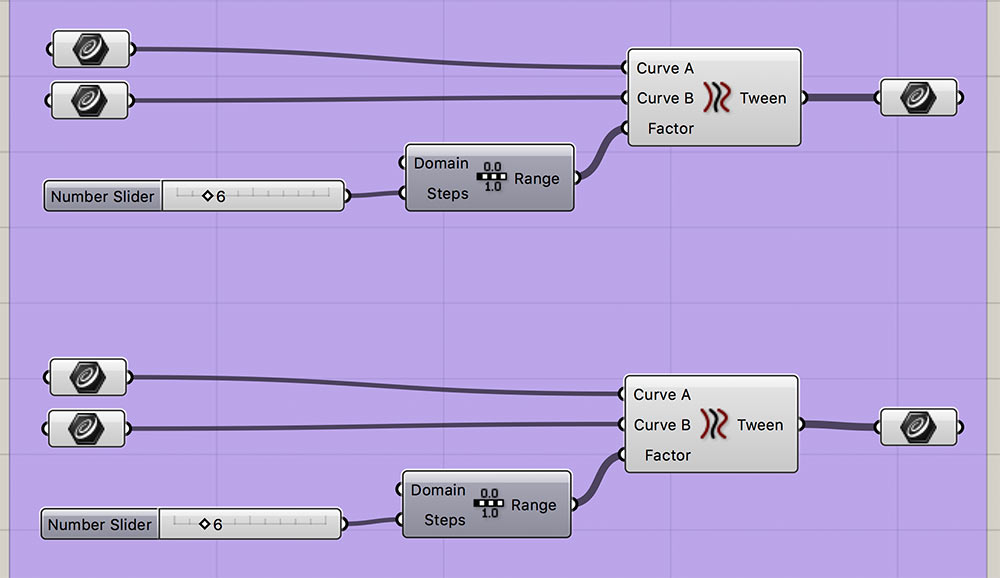 The last step was to create a thickness to my pieces, so that I was able to print them. I used these Grasshopper commands to do this once I had use the Rhino Mesh command to transform my surfaces into meshes:

And this is how they were when I was doing it: 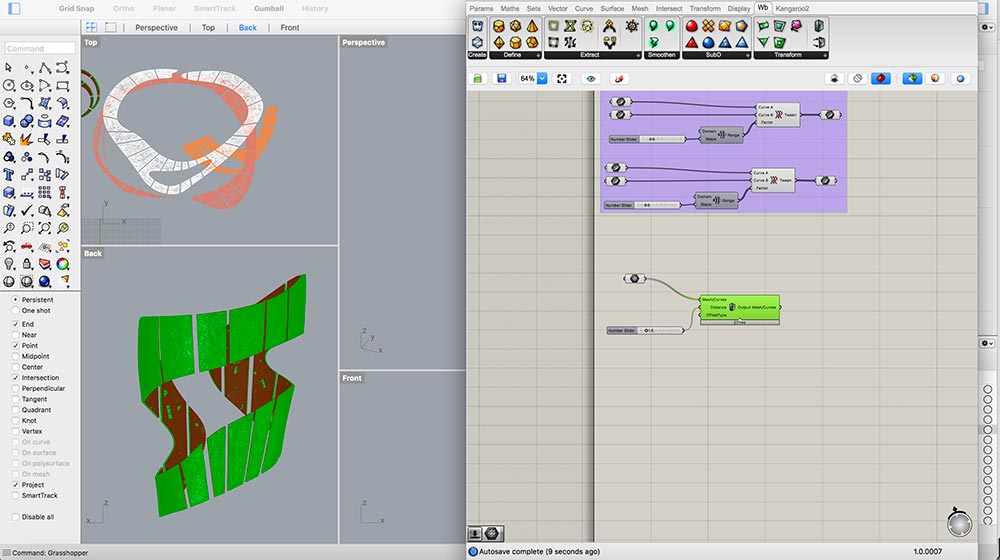 This is how my final Structural Body Paramapp looks: 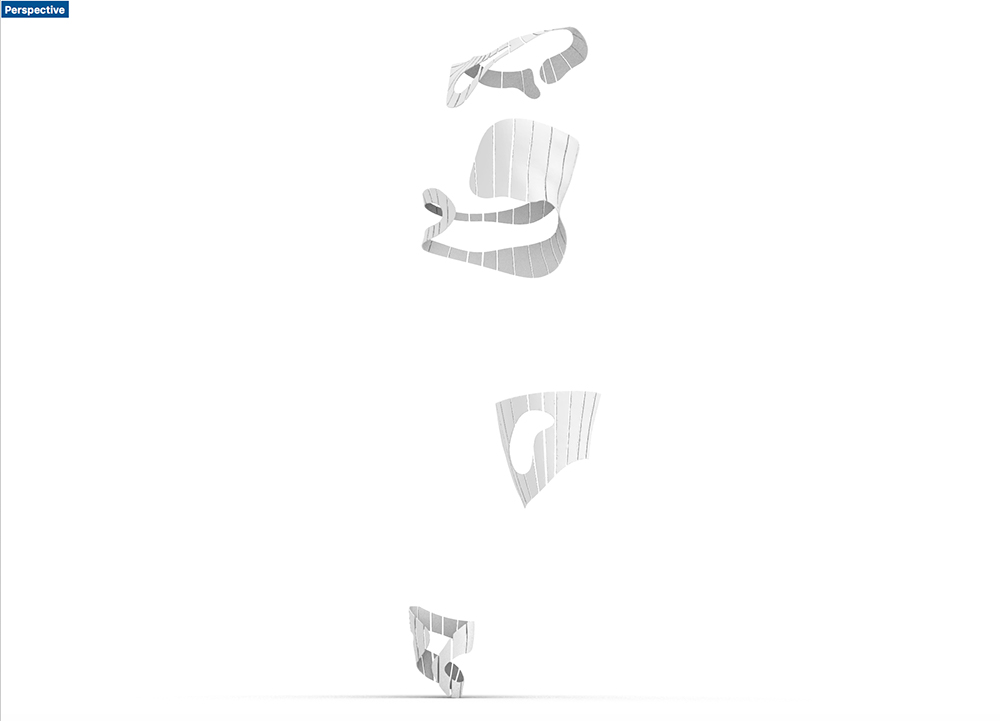 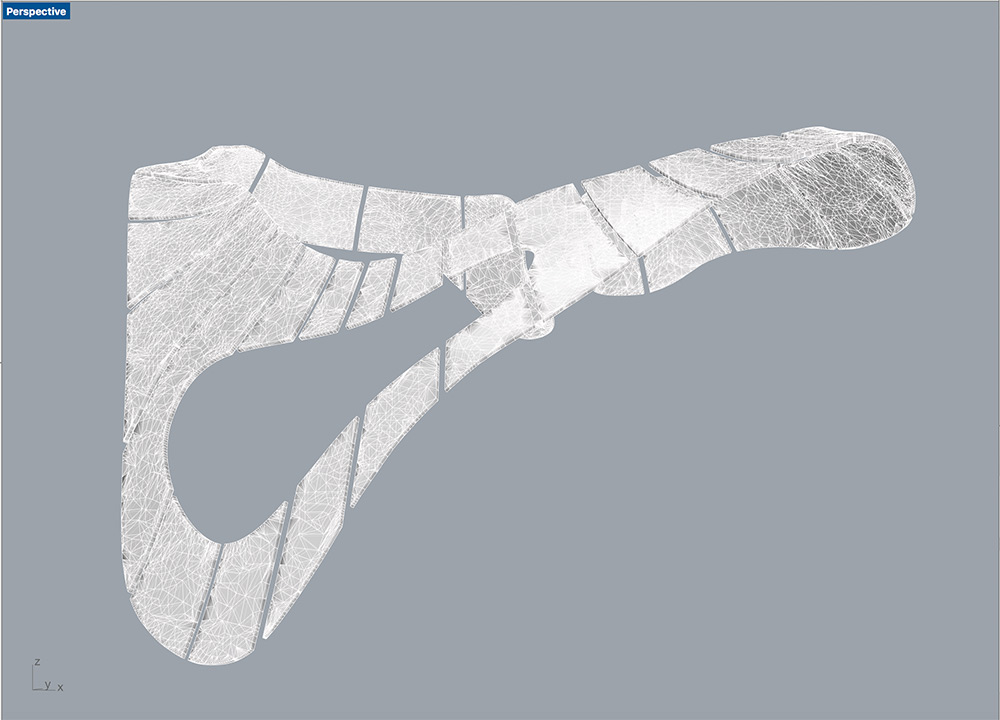 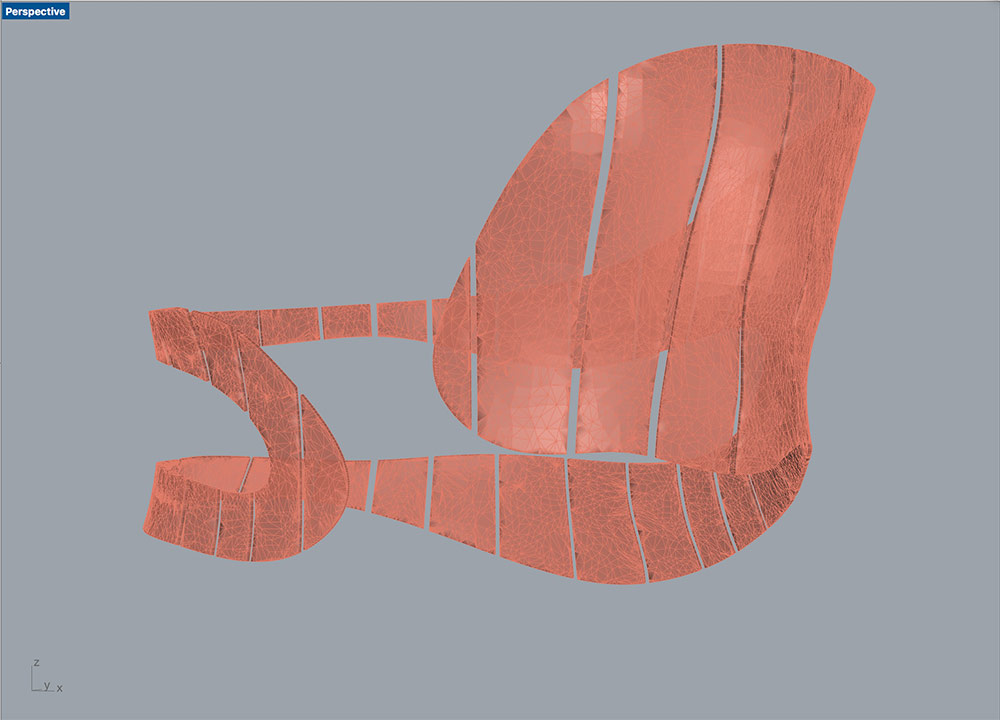 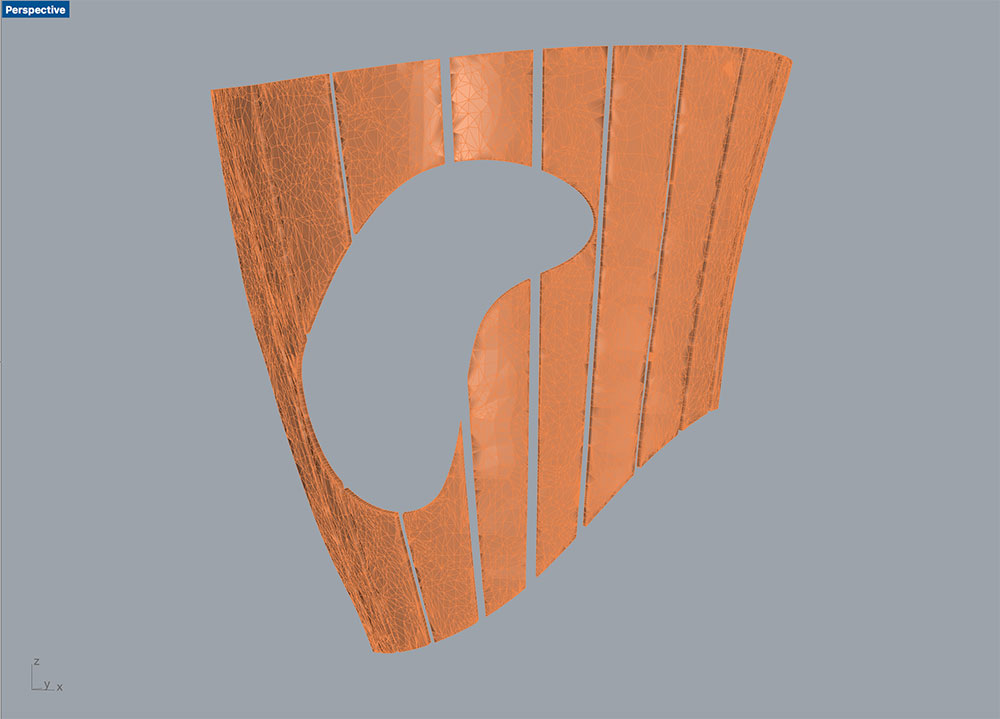 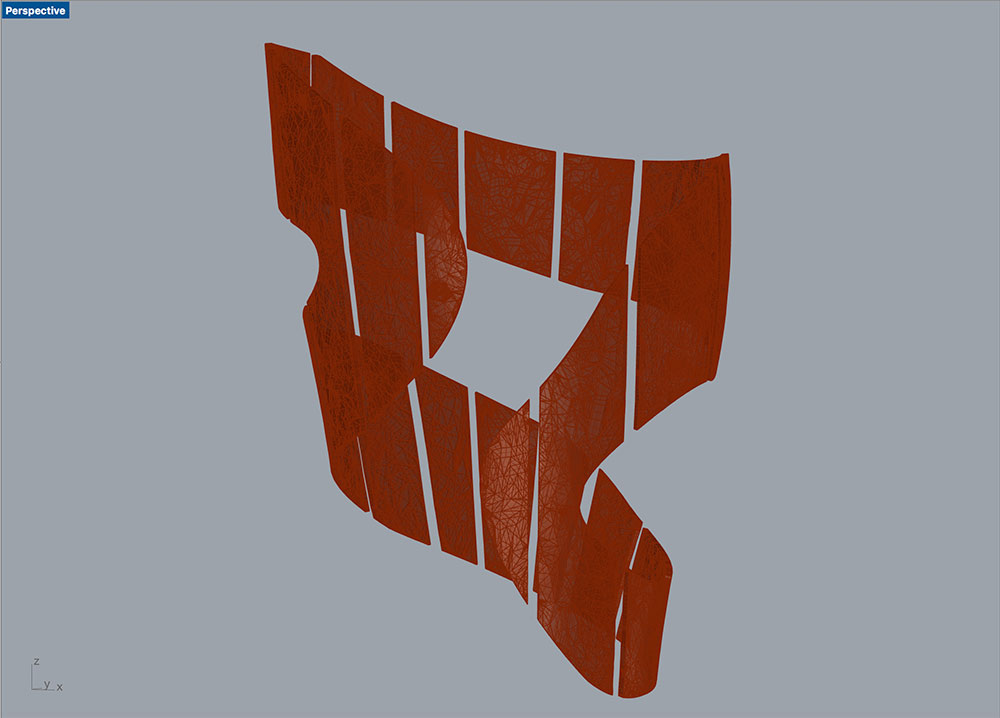